Chondrosarcoma of the Posterior Mandible: A Case Report

Chondrosarcoma is a malignant tumor of long bones which is characterized by the formation of cartilage. It is the second most common tumor of bones after osteosarcoma and only 3-10% of cases occur in maxillofacial region. Chondrosarcomas mostly occur in individuals older than 50 years with maxilla being the most common site of involvement in maxillofacial skeleton. Involvement of mandible is very rare and mostly anterior portion is involved. A rare case of chondrosarcoma of the left posterior mandible in a 21 year old female patient is presented and review of literature is discussed.

Chondrosarcoma is a malignant tumor which is characterized by the production of cartilage, and not bone, by tumor cells [1]. The most commonly involved bones are the ileum, femur, and humerus. Involvement of the head and neck is rare, constituting 0.1% of all head and neck neoplasms. In head and neck region, involvement of mandible is very uncommon [2]. The peak incidence is in the sixth to seventh decade of life and so far only 20% cases have been documented below 20 years of age. Chondrosarcomas vary from a well-differentiated growth that resembles a benign cartilage tumor to a high-grade malignancy having a local aggressive behavior and a potential for metastasis [3]. We report a rare case of chondrosarcoma of posterior left mandible in a 21 years old female.

A 21 year old female patient reported to us with a chief complaint of swelling in lower left jaw region since 2 months. Patient gave a history of intraoral swelling that she noticed accidentally 2 months back. Swelling was initially small & asymptomatic. After 6-7 days she noticed that swelling increased in size accompanied with pain, which was mild and intermittent in nature. Extra oral examination revealed a solitary diffuse swelling in posterior left mandible extending anterioposteriorly 2 cm posterior to corner of mouth up to line drawn from outer canthus of eye and superioinferiorly from 2 cm below the corner of mouth to lower border of mandible. Overlying skin was normal in color (Figure 1A, 1B). Intraoral examination revealed a solitary swelling present in left mandibular buccal vestibule, extending anterioposteriorly from 34 to 37 and superioinferiorly involving complete left vestibular area (Figure 1C). On Palpation, swelling was firm to hard in consistency, ovoid in shape with slight pain and discomfort on palpation. Grade I mobility irt 35 and 36 was present. General physical and medical examination of the patient was noncontributory. Blood examination reports were within normal limits. 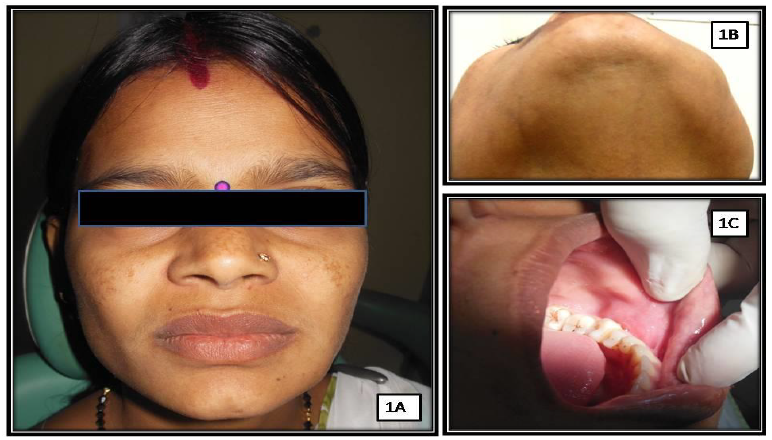 Figure 1: Extra-oral & Intra-oral pictures showing abnormality on the left side of the mandibular posterior region. 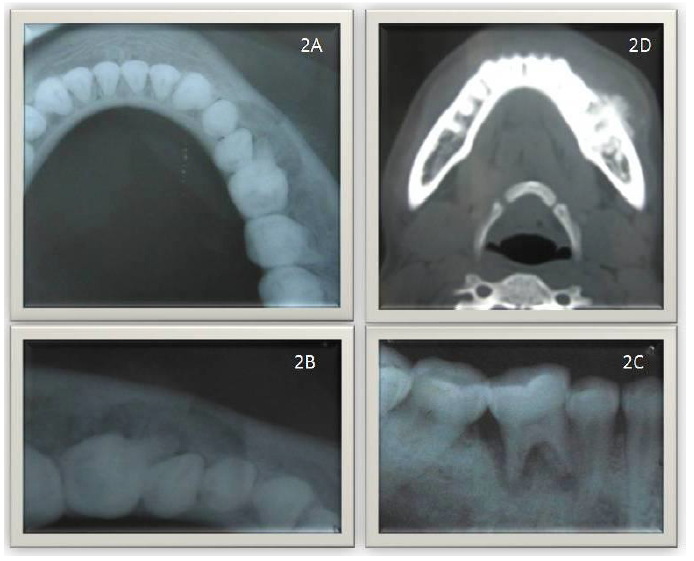 Based on the clinical and radiographic findings a provisional diagnosis of osteogenic sarcoma was made and an incisional biopsy was performed.

Histopathologic examination revealed chondroid tissue with a lobular growth pattern, with tumor lobules separated by thin fibrous connective tissue septa(Fig – 3A) . The central area of lobules had good degree of maturation while the peripheral areas consisted of immature cartilage and mesenchymal tissue made up of spindle shaped cells. Increased cellularity particularly about the periphery of the lobules was noted. The cells exhibited variation in size with many large, plump chondroblasts and few binucleated chondrocytes (Fig – 3B). The chondrocytes had a variation in size of nuclei. Few areas of myxoid tissue and a low mitotic activity were noted (Fig – 3C). Very few foci of calcification were seen (Fig – 3D). The overall features were suggestive of grade II chondrosarcoma. 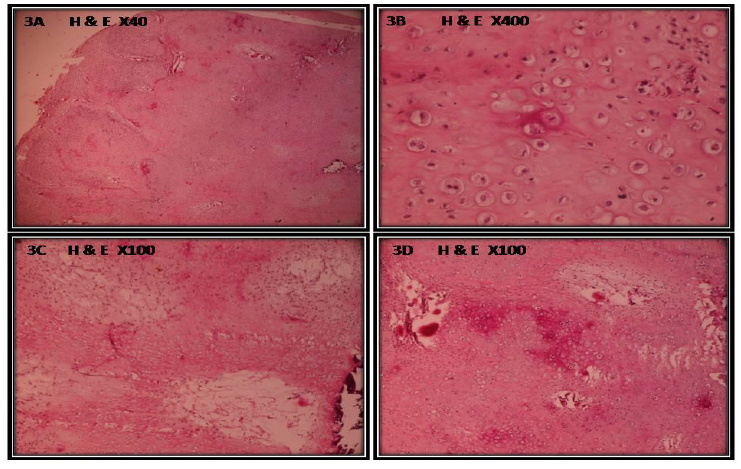 The patient was advised to undergo surgery, and the tumor was treated by en bloc resection. Patient’s postoperative phase was uneventful.

Chondrosarcomas are slow-growing, malignant mesenchymaltumors which are characterized by the production of cartilage by the tumor cells [1]. It can arise de novo or can be induced by a pre-existing enchondroma, fibrous dysplasia or irradiation. But in the present case there was no associated history or previous irradiation.  Only 3-10% of chondrosarcomas occur in head and neck with nasal cavity and larynx being the most common sites. Chondrosarcomas of the head and neck have occurred in patients with Ollier’s disease and Maffucci’s syndrome [4]. In jaws maxilla is the most common location, with a frequency of 19.6%. Chondrosarcoma of mandible is very rare, with only 10% cases occurring. The most common site of involvement in mandible is symphyseal portion [5]. But in the present case posterior part of mandible was involved. Clinically chondrosarcoma of mandible presents as a painless swelling with loosening of involved teeth due to widening of periodontal ligament. Similar presentation was seen in the present case also. If chondrosarcoma occurs in or around temporomandibular joint region, trismus or abnormal joint function may result [4].

There are no pathognomonic radiographic features for chondrosarcoma. On a conventional radiograph, chondrosarcomas appear to have well defined or corticated borders or at times blend with adjacent normal bone. Sometimes, peripheral periosteal new bone may occur that is perpendicular to the original cortex, giving rise to sunray or hair-on-end appearance.[6] Similar CT scan finding of sun burst appearance was noted in the present case.

Also chondrosarcomas may display some form of calcification within their center, giving a mixed radiolucent-radiopaque appearance which may appear as moth eaten bone alternating with islands of unaffected bone. The central radiopacity has been described as flocculent or snow line. This calcification may be superimposed on a bony background giving a granular or ground-glass-appearing abnormal bone [6].

Preferred treatment of choice for chondrosarcoma is surgical excision with wide margins. Tumor grade and resection are the important prognostic factors for head and neck chondrosarcomas. Histologically positive margins and a high-grade tumor di­fferentiation lead to poor prognosis [10].