A 5-month-old male baby was referred to our Ophthalmology Service for retinoblastoma suspect. Their parent noted an intermittent exotropia in the right eye for four months old. The newborn was the full term of an uncomplicated, full-term pregnancy and delivery with no used of supplemental oxygen.

In the initial examen, we noted poorly right eye fixation. At under general anesthesia examen, the slit lamp examination of the anterior segment was unremarkable and normal intraocular pressure (both eyes 8 mmHg). Dilated fundus examination of the right eye revealed a mass slightly elevated, circumscribed to the super nasal quadrant of right eye without clear limits in the margin area near the optic nerve. The margin of the lesion appears hyperpigmented due to hypertrophy of the underlying RPE which merges seamlessly into the surrounding normal RPE. The central portion of the mass was formed by thickened semi- translucent retinal tissue and a grey-white pre-retinal membrane. There was tortuosity of the retinal vessels toward the centre of the tumour. We used the typical clinical features of CHR- RPE described by Gass to do the diagnosis. B- scan echography revealed an elevated lesion at the superior and nasal quadrant of the right eye with an irregular inner surface. Standardized A-mode showed a solid, high to medium and irregular reflective mass with a maximum height of 3.64 mm.

Magnetic resonance (MR) imaging of the orbit demonstrated a single intraocular mass in the superior and nasal quadrant, arising from the retina and choroid of the right eye. The mass was depicted as hyperintense on T1-weighted fat-saturated MR images and hypointense on T2-weighted MR images and enhanced slightly after contrast injection. Incidentally, staphyloma of the eyeball was found underlying the described lesion. No extraocular extension was found.

The management was conservative, and the patient was observed every three months for follow- up care during the first year and every 6 months then. During the first six months, there was no changes in tumour size similar. Then the width of the tumour started to a progressive decrease in the B- scan echography (from an initial width of 3,64 mm to 1,54 mm three years later), and in the MRI. Whiles in the dilated fundus examination the lesion was thinner and the vascularization was less pronounced. The tangential force of the inner surface of the lesion was evident in the acquisition of the round form of itself in the following time.

Limitation of this case report: the OCT was not available for the first examen under anesthesia.

CHR-RPE is a rare and generally benign ocular tumour. It was described as “Melanose de nerf optique” for Roveda in 1952 [1], and in 1973 Gass described this lesion as Combined hamartoma of the retina and retinal pigment epithelium [2].

The term hamartoma refers to the abnormal proliferation of tissue(s) usually present in the involved area. The pathology of this lesion was described a pigment epithelium proliferation perivascular towards the optic nerve, a thickening and disorganization of the inner retinal layers, capillary proliferation near the optic nerve and a pre-retinal membrane usually associated to the tumour without a cleavage plane [3, 4]. Often, these lesions do not show growth in the successive controls, neither choroidal involvement is observed [2]. Despite the poor evolution of these lesions, tractions on the healthy retina can compromise vision so regular follow up are recommended. [3, 5]. In some cases, they may appear hemorrhages, exudates, and serous detachments of the neuroepithelium associated with the epiretinal membrane [6,7].

Our patient meets the typical clinical features of CHR-RPE described by Gass in 1973 [2]. These features are:

2) hamartoma base consisting of a sheet of hyperpigmented tissue at the level of the pigment epithelium.

3) inner and the central portion of the hamartoma consisting of varying amounts of thickened grey-white retinal and pre- retinal tissue.

4) evidence of contraction of the inner surface of the hamartoma with a displacement of the surrounding retina and retinal blood vessels toward the center of the hamartoma.

5) absence of evidence of choroidal involvement.

7) No evidence of growth on follow-up examination.

There is a known association with neurofibromatosis type 1 or 2 [6], but in these cases the tumor is frequently located at the macular level and usually, bilateral. Our patient had no such association.

In our case, we observed a posterior staphyloma underlying the hamartoma that became more evident in the subsequent controls with a decrease in the thickness of the lesion over time. An uncommon condition in the case highlight in this case is the circular shape transformation of the lesion with an increase in the delimitation of its margins that acquired over time. We believe it was the effect of tangential traction in the central tissue of the lesion on the rest of the growing eyeball. 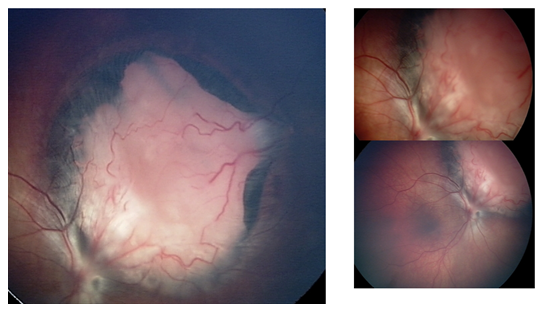 Figure 1: Dilated fundus examination of the right eye revealed a mass slightly elevated, circumscribed to the super nasal quadrant of right eye without clear limits in the margin area near the optic nerve. 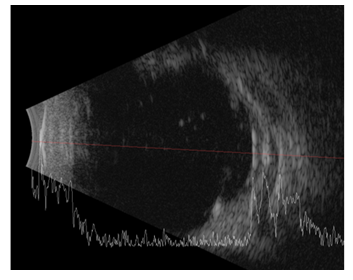 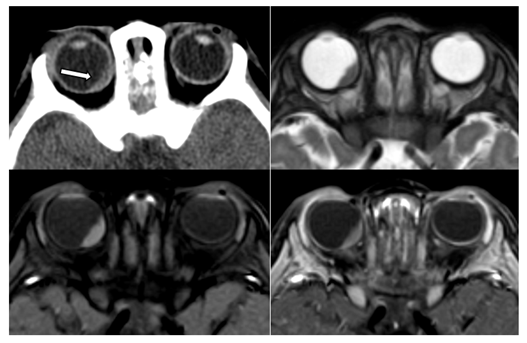 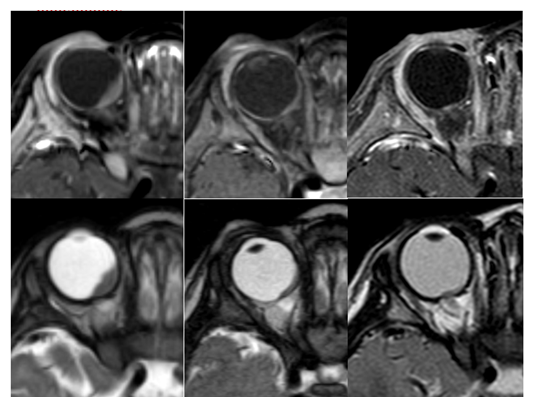 Figure 6: A, B, C Axial post-contrast T1-weighted image with fat suppression. D, E, F Axial T2-weighted MR image. The images show a progressive decrease in the size of the lesion in the superonasal quadrant of right eye in three consecutive years of follow-up (A and D: June 2014, B and E: July 2015, C and D: November 2016).

Clinically, CHR-RPE appears as a mildly elevated grey-brown mass with poorly define edges and almost always unilateral. In most cases this lesion is located in the posterior pole, juxta papillary even though can also be found in the middle periphery. The proximal retinal vessels are tortuous, and they are covered with a glial membrane with classic traction of the vitreoretinal interface [1,4].

Our patient presented a benign tumor in the right eye, initially followed to rule out malignant lesions such as retinoblastoma or choroidal melanoma. During clinical and imaging six-years follow up, we observed a decrease in the thickness of the lesion, greater delimitation of the edges and acquisition of a rounded shape of the lesion. Likewise, a posterior staphyloma of the eyeball underlying the lesion became evident. No other ocular findings were observed.

To our knowledge is the longest term clinical and imaging follow up in a CHRPE case. It is imperative to perform a full clinical exam regarding NF asociation and similar malignant ocular tumours. Whereby, it is imperative to distinguish this benign tumour for appropriate treatment and do not an unnecessary enucleation.