Deep Infiltrating Endometriosis in Dizygotic Twins: A Case Report and a Review of Literature

There is a large body of literature supporting the heritable nature of endometriosis. Although there is significant evidence demonstrating the heritability of endometriosis, there is little to no evidence demonstrating the role of heritability in patients with Deep Infiltrating Endometriosis (DIE).We present a case of two 26-year-old G0 dizygotic twins with almost identical severe posterior compartment DIE who both underwent fertility sparing laparoscopic excision of DIE.This case demonstrates an almost identical presentation of DIE in dizygotic twins. Both patients had disease manifestation in their mid 20s, similar symptomatology, almost identical intraoperative findings, and the same improvement in pain following the procedure. Although this case study further contributes to the large body of literature demonstrating the heritability of endometriosis, this is the first case study demonstrating a striking resemblance of rectovaginal DIE in dizygotic twins.

Both patients provided an informed consent, their anonymity was maintained during this case report presentation. Patient 1 was a 26-year-old G0 female who was referred for suspicion for endometriosis after being treated for suspected PID in the ED. Of note, patient was negative for gonorrhea, chlamydia, and trichomonas. She reported the onset of her symptoms 10 year prior to initial evaluation, which had increased in intensity since that time. She described the pain as occurring 2 days prior to her menses, worse on the second day, and improved by the third day. She had attempted combined oral contraceptives 6 months prior to evaluation however had little to no improvement. She described her pain as sharp, present throughout the entire abdomen, with extreme pain with bowel movements during her menstrual periods. She was not sexually active at the time of evaluation however did desire further childbearing. For workup, the patient had a transvaginal ultrasound and pelvic MRI performed. The transvaginal ultrasound demonstrated a retroverted uterus, normal in size, with heterogeneous myometrium suggestive of adenomyosis. The ovaries were noted to be fixed bilaterally to the uterus. Additionally, there was a hypoechoic nodular area seen in the posterior cul de sac measuring 20 x 8 mm. On MRI, the patient was noted to have hypointense scarring and tethering involving the posterior mid body of the uterus consistent with deep infiltrative endometriosis. Deeply infiltrative endometriosis extends roughly 4 cm in cranial caudal dimension and 4 cm in transverse dimension (see Figure 1, highlighted in green). 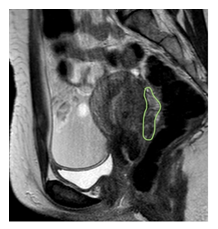 The patient was counseled on these findings including the process of deep infiltrating endometriosis and the concern for rectal scarring. The patient was recommended to have evaluation by colorectal surgery and the decision was made to proceed to the operating room for laparoscopic excision of the endometriosis. Intra operative findings included fibrosed fallopian tubes with patency proven on chromopertubation, bilateral small sized ovaries, and a large 2 x 2 cm rectovaginal nodule involving the anterior rectal wall and the posterior vaginal and both uterosacral ligaments. She underwent mobilization of the rectosigmoid, dissection of the rectovaginal septum, excision of deep infiltrating endometriosis of the rectovaginal septum, bilateral ureterolysis, and cystoscopy with attempted ureteric stenting. Final pathology was consistent with fibroadipose tissue with focal involvement by endometriosis. The patient had visits at 2 and 6 weeks post op. She was noted to have significant improvement in her pain. 5 months following the initial patient’s surgery, her twin sister presented for evaluation. She was 27 at the time of initial evaluation and was also gravida 0 para 0. The patient reported similar symptoms of her twin sister including pelvic pain which started several years prior to evaluation. She reported her pain had become significantly worse over the years and was extremely painful prior to menses and during menses. She had also attempted medical management with OCPs. She had undergone a similar work up for deep infiltrating endometriosis including a transvaginal ultrasound and pelvic MRI. Her ultrasound demonstrated a normal uterus with fixed right and left ovaries. Her left ovary was noted to have a 70 x 59 x 30 mm endometrioma present. Although the uterus was normal in appearance, it was fixed in the pelvis. 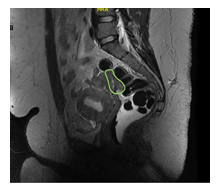 On pelvic MRI (Figure 2), the uterus was noted to be normal in size and appearance. She was also noted to have a left adnexal lesion which was measured to be 6.8 x 4.2 cm. There was also noted to be focal tethering of the rectosigmoid to the left adnexal lesion however no invasion into the rectosigmoid wall. The patient was counseled on the findings and referred to colorectal surgery for a pre-operative evaluation. She then decided to proceed with surgical intervention. Intraoperative findings included deep infiltrating endometriosis of the rectovaginal septum with involvement of the anterior rectal wall and the left ureter and the left uterosacral ligament. Bilateral endometrioma were also noted with severely scarred ovaries adherent to the back of the uterus and the rectosigmoid. The patient underwent laparoscopic excision of deep infiltrating endometriosis, mobilization of the rectosigmoid, left ureterolysis, bilateral ovarian cystectomies, chromopertubation, and cystoscopy with bilateral ureteric stenting. Pathology was consistent with endometriosis involving smooth muscle and vascular adipose tissue and endometriosis involving fibromuscular connective tissues. At her post-operative visits, she was noted to have significant improvement in her pain.

This case demonstrates an almost identical presentation of DIE in dizygotic twins. Both patients had disease manifestation in their mid 20s, similar symptomatology, almost identical intraoperative findings, and the same improvement in pain following the procedure. Although this case study further contributes to the large body of literature demonstrating the heritability of endometriosis, this is the first case study demonstrating a striking resemblance of rectovaginal DIE in dizygotic twins. Deep infiltrating endometriosis, also known as adenomyosis externa, is considered to be a different phenotype from ovarian endometriomas and superficial peritoneal lesions [5]. It is considered the most aggressive, severe form of the disease. The most common presentation of DIE includes the rectovaginal septum and uterosacral ligaments (69.2% of cases), the vaginal (14.5%), alimentary tract (9.9%), and urinary tract (6.4%) [6]. DIE has been demonstrated a significant role in infertility, with evidence demonstrating up to 84% success in conception following surgical resection [7]. Unlike peritoneal disease, recurrence rates of DIE after surgery are estimated to be as low as 5% [8,9]. The pathogenesis of endometriosis is multifactorial. Although a clear genetic predisposition has been identified, there are a number of contributing factors to the disease expression. These include a combination of genetics, immunological factors, and environmental factors. Endometriosis is a polygenic disease and the genes and their variants playing a role in the development of endometriosis have been widely investigated [10]. The mainstays of investigating the genetics of endometriosis include candidate gene studies, linkage and association studies, and Genome-Wide Association Studies (GWAS). To date, there are over 50 single nucleotide polymorphisms and approximately 40 endometriosis associated gene that are related to the development of endometriosis confirmed by gene association studies and GWAS [11]. Endometriosis is a complex multifactorial disease with a large body of literature supporting the heritability. We demonstrate a case of dizygotic twins with an almost identical presentation of posterior compartment deep infiltrating endometriosis including similar ultrasound/MRI findings, intraoperative findings, and post operative resolution of symptoms. To date, there have been a number of studies investigating the genetics of endometriosis with the mainstays of investigation including candidate gene studies, linkage and association studies, and Genome-Wide Association Studies (GWAS). This case provides further evidence to support the inheritance of the disease.