Background and Objectives: The net clinical effect of vitamin D on atherosclerosis and therefore coronary arteria ectasia (CEA) is controversial. While many trials have showed the favorable effects of vitamin-D others were related with negative outcomes and the exact levels of serum vitamin-D were not consistent with clinical outcomes. So therefore, we aimed to measure the levels of vitamin-D by HPLC technique which is better than conventional spectrophotometric methods.

Methods: A total of 202 patients were enrolled to our study and 102 of them were in patient group. They have diagnosed with CEA by angiographically and the level of vitamin-D was measured by High Performance Liquid Chromatography (HPLC) technique both in the patients of control and study group.

Results: There was no statistically meaningful difference between groups according to the basic but the serum levels of vitamin-D were lower in patients with CEA with a mean value of 20.5 ng/ml and the average amount of serum vitamin-D was 54.6 ng/ml in control subjects (p<0.001).

Conclusions: The serum levels of vitamin-D were detected as clearly lower by HPLC technique in patients with CEA and it has proved one more time the relation of lower levels of serum vitamin-D and CEA. At the same time, the method showed extremely high or totally normal values of vitamin-D levels in patients without CEA which has been not showed previous trials. Also, HPLC may yield more accurate results of serum vitamin-D than other spectrophotometric measuring techniques particularly in normal individuals.

Cardiovascular diseases (CVD) have stayed the leading reasons of death globally in at least the past 30 years [1,2]. The vast majority of CVD are consisting of coronary artery disease, and a coronary arterial ectasia (CEA) is one of the well-known reason of CAD as result of atherosclerosis. Many studies have described the incidence of CEA between 1.7% and 5.4% [3,4]. The two recognized forms of CEA such as inflammatory and congenital types can be more frequent in early years of life, while atherosclerotic CAE is generally found in adults [4].

The net clinical effect of vitamin D on atherosclerosis and therefore CEA is controversial. Many years ago, it had been demonstrated that higher dose of vitamin-D result in vascular calcification [5]. Similarly, vascular calcinosis had detected in children as an outcome of vitamin-D therapy of rickets [6]. However, favorable effects of vitamin-D on cardiovascular system has also been showed in recent years [7]. Orally taken vitamin-D decreases the levels of serum triglycerides, pro-inflammatory mediators such as cytokines and regulates positively the hormone of parathyroid and improves flow mediated dilatation of arteries [8,9]. On the other hand, the lower levels of serum vitamin D were also associated with higher incidence of CAE [10]. All of these data clearly seem to conflicting to each other and it rises the suspicions of clinicians about the accuracy in the measurement of serum levels of vitamin-D.

Serum vitamin-D levels were measured by ELISA, standard liquid chromatography or chemiluminescence immunoassay techniques in previous trials [10-12]. However, high performance liquid chromatography (HPLC) is a technique which is superior than classical liquid chromatography (LC) in the separation of thermolabile and decomposable compounds and it is very applicable to separating substances such as amino acids, nucleic acids, carbohydrates, antibiotics, inorganic salts, and steroids. While classical LC able to isolate larger particles (>100 µm), HPLC technique can separate the particles even under 1,5 µm of diameter in a shorter time. In other words; the HPLC provides fast and efficient separation, separates and analyses very complex structures and gives accurate quantitative measurements. Therefore, HPLC is widely used for separation of molecules in biological, pharmaceutical, food, environmental and industrial process.

A total of 202 patients were enrolled to our study between June, 2018 and November, 2019. Patients divided into two groups which 102 of them have had CEA and other 100 patients were included to control group whose coronary angiography have showed no ectasia or significant stenosis. CEA described as an enlargement with a diameter of one and half times the contiguous normal coronary artery. Presence of all CEA was confirmed by angiographically. Visualization and evaluation of coronary arteries was performed by two cardiologists and the presence of narrowing more than 50% in epicardial major arteries was accepted as significant stenosis. Patients with kidney, liver and structural heart diseases were excluded. Vitamin-D or calcium treatments were also another exclusion criteria in this trial. The written informed consents of all patients were obtained prior to their enrollment. Also, the study was approved by the local ethics committee of the university, in accordance with the ethical principles for human investigations, as outlined in the second Declaration of Helsinki.

The patients both in control and study groups were stayed at night at the hospital and blood samples were collected after at least 10 hours of fasting into anticoagulant tubes. Serum was obtained by centrifugation at 5000 rpm for 15 minutes and stored at −80°C until assayed. Fasting blood glucose, aspartate aminotransferase, alanine aminotransferase, creatinine, low-density lipoprotein cholesterol, high-density cholesterol, and triglyceride levels were recorded. Additional blood was gathered into ethylene diaminetetraacetic acid contained tubes in order to count whole blood and examined by Coulter LH 780 Hematology Analyzer (Beckman Coulter Ireland Inc., Mervue, Galway, Ireland).

Analysis of vitamin-D levels by the HPLC Method

The quantitative analysis of serum vitamin-D (cholecalciferol) was determined by high performance liquid chromatography (HPLC, Agilent-1100 series, Germany) according to the procedure modified from the relevant literatures [13-15]. In the measurement of vitamin-D, 200 µl of ethanol was added to 200 µl of plasma and they have vortexed together. Then, 800 µl of hexane was added and the mixture was vortexed again for 2 min. After centrifugation, the lipophilic hexane phase was collected and dried under N2 gas. Then it was re-dissolved in 200 µl ethanol, and 20 µl of sample was injected into an HPLC system fitted with a 5µm C18 reverse-phase column (C18, 250 x 4.6 mm, Supelco, at room temperature). As a mobile phase, methanol-water (98:2) was used in 1.5 ml/min flow rate. In the quantitative determination of the vitamins D, diode-array detector was employed in 265 nm wavelength. Double distilled water was used during the procedure. All the chemical reagents were of analytical grade and commercially available (Merck Company).

We were stated the statistical data as an average, standard deviation, minimum and maximum values. Student’s t-test was chosen in the comparison of the basic features of groups. Univariate and multivariate regression analyses were completed to guess (with a confidence interval [CI] of 95%) the existence of ectasia by considering age, gender, smoking, hypertension, hyperlipidemia, and vitamin D levels. Also, Box and Whisker Plot graph was obtained by the use of MedCalc®v15.4 package software. Statistically significance level accepted as 5% and SPSS (version:13 SPSS Inc., Chicago, IL, USA) package program was used.

A total of 124 men and 78 women enrolled to our study. Study group included 102 (61 men) patients who were diagnosed with CEA by angiographically and there were 100 patients (63 men) in control group whose coronary arteries were normal. The average age of patients was 55.28±9.14 and 54.72±9.85 years in study and control group of patients respectively. Comparison of descriptive features and biochemical blood results of patients between groups have shown below (Table 1). There was no statistically meaningful difference between groups according to the basic features and blood results except the level of vitamin–D. The serum levels of vitamin-D were extremely lower in patients with CEA regarding to normal range of 30-100 ng/ml, with a mean value of 20.5 ng/ml irrespective of gender. On the other hand, in control subjects the average amount of serum vitamin-D was 54.6 ng/ml which corresponds to the totally normal ranges (p<0.001). In addition, we would like to evaluate the lower amounts of serum vitamin-D as an independent risk factor in the formation of CEA and so therefore, the well-known atherosclerotic risk factors such as age, hypertension, male gender, hyperlipidemia, and smoking as well as vitamin-D were analyzed by both univariate and multivariate logistic regression analysis. The lower serum levels of vitamin-D (odds ratio [OR]=0.879, 95% CI 0.836-0.949, p<0.001) was clearly found as independently correlated with the presence of isolated CEA. Furthermore, the analyzed values of serum vitamin-D has shown below by the help of Box and Whisker Plot graphics in both control and study group of patients and the enormous difference between groups were clearly visible in the mentioned box and graphics (Figure 1). 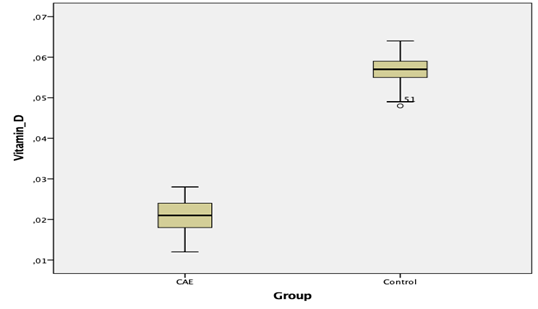 Figure 1: Levels of vitamin-D (µg/mL) has shown by Box and Plot graphs in both control and study group of patients. CAE: Coronary Arteria Ectasia.

Table 2: Independent predictors for the occurrence of CEA in both univariate and multivariate logistic regression analysis. *OR: odds ratio, **CI: confidence interval.

In conclusion, the serum levels of vitamin-D were detected as clearly lower by HPLC technique in patients with CEA and it proves one more time the relation of lower levels of serum vitamin-D and CEA. At the same time, the method showed extremely high or totally normal values of vitamin-D levels in patients without CEA. Also, HPLC may yield more accurate results of serum vitamin-D than other spectrophotometric measuring techniques particularly in normal individuals.

We have measured the levels of vitamin-D during whole part of the year regardless of its seasonal variations but blood samples of both control and study group patients were obtained at the same day and so therefore, the seasonal effects may not take an important role in the comparison of vitamin-D levels between the groups. Furthermore, we could have detected the correlation of serum vitamin-D levels and the severity of ectasia in order to show the potential effect of vitamin-D to ectasia but it was not in the scope of this trial. Also, this was the first trial which measures the levels of vitamin-D by HPLC method in patients with CEA and definitely we need more trails in this field to decide the superiority of HPLC than traditional methods.

We are grateful to Prof. Dr. Demir because of his unlimited support in the understanding of HPLC method and the measurement of serum vitamin-D levels both in control and study group of patients.

The authors declare that there is no conflict of interest.

Current trial was financially supported by the Chemistry Department of Yuzuncu Yil University.