Methods: This was a single center, cross sectional, observational study which included patients with AF treated at a tertiary care hospital, from January 2017 to December 2017. Patients were subdivided into different subgroups based on etiology and D-dimer levels were measured. Reference value for the normal population was taken as < 0.5 μg/ml.

Results: 70 patients with AF were studied over a one-year period. Mean age of study population was 53 years. Valvular AF was the most common etiology(30%) noted followed by non-ischemic cardiomyopathy (NICM) (14.2%). About half of study population had history of heart failure whereas thromboembolism(TE) was noted in 15.7%. 72.8% patients had elevated D-dimer levels in the cohort. D-dimer levels were significantly higher in valvular AF(1.2 μg/ml) and NICM patients(1.4 μg/ml) (p=0.005). Higher D-dimer levels were noted in those with heart failure (HF) events (p=0.016). D-dimer levels were shown to accurately detect prior HF/ TE events with levels of 1.1 μg/ml and higher having a sensitivity and specificity of 59.1% and 81%, respectively (AUC 0.727).

Conclusion: D-dimer levels are significantly higher in valvular AF and NICM patients. D-dimer levels have a strong association with HF/TE events and elevated levels can be used to detect at risk patients.

This was a single center, cross sectional study performed at a tertiary care hospital, over a period of 6 months from January 2017 to June 2017. All patients with persistent atrial fibrillation, who attended out-patient department or had hospital admission, were included in the study. Patients with multisystem disorders, sepsis, malignancy and chronic kidney disease on hemodialysis were excluded. Baseline demographics and co-morbidities like hypertension, diabetes, dyslipidemia, thyroid disorders, obstructive airway diseases, obstructive sleep apnea were recorded. Drug history including history of oral anticoagulant intake was also recorded. ECG was done in all patients to document presence of atrial fibrillation. Doppler echocardiography was used for evaluation of valvular heart disease and ventricular function. The study patients were divided into multiple subgroups depending upon etiology of atrial fibrillation. The main subgroups were valvular AF, non-valvular AF, ischemic heart disease, non-ischemic cardiomyopathy and other miscellaneous causes. Doppler echocardiography was performed to determine the etiology of atrial fibrillation. Valvular AF was defined as presence of mitral stenosis (most commonly rheumatic in etiology) or prosthetic heart valves. Non-valvular AF included patients with atrial fibrillation in presence of valvular lesions other than mitral stenosis(mitral regurgitation, aortic stenosis, aortic regurgitation). Ischemic heart disease was defined as documented evidence of coronary artery disease or past history of acute coronary syndrome. Patients with documented evidence of heart failure, ventricular dysfunction on echocardiography with normal epicardial coronaries were considered to have non-ischemic cardiomyopathy (NICM). Other causes of atrial fibrillation like thyroid disorders, lung diseases, obstructive sleep apnea were also noted. Heart failure events were defined as documented episodes of dyspnea and pedal swelling, which may or may not have required hospitalization. Thromboembolic events were defined as documented episodes of stroke, systemic embolism or peripheral vascular thrombosis. Quantitative D-dimer level estimation was done using immunoturbidimetric assay. Normal D-dimer levels at our institution was considered <0.5 mg/ml, which is similar to cut-offs followed worldwide. Other biochemical investigations including complete hemogram, renal function test, liver function test and thyroid profile were also performed. This study was approved by the Institutional ethics committee, Medical College, Kolkata and informed written consent was taken from all patients. No independent grants or funds were received for the purpose of this study.

Data was collected using a structure questionnaire and recorded in a tabular format. Categorical variables were presented as proportions whereas continuous variables were presented as mean and standard deviation. Categorical variables were studied using binomial test and Chi-square test. Unpaired t test and ANOVA test were used to compare means of different continuous variables. ROC curve was plotted to determine the specificity and sensitivity of different study variables for prediction of clinical events. A p value of <0.05 was considered to be significant. The data analysis was done using SPSS version 20 (IBM, Armonk, NY).

70 patients were included in our study over the period of 1 year. The baseline characteristics of the study population is outlined in Table 1. The mean age of the study population was 53 ± 14 years. Majority of the patients (56%) belonged to the age group 30-59 years. Females comprised 47% of the study population. Around 18% of study population had diabetes and hypertension whereas 3% had thyroid abnormalities. Valvular AF was the most common subgroup noted in our study cohort (30%) followed by non-ischemic cardiomyopathy (NICM) (14%), non-valvular AF(11.4%) and ischemic heart disease (IHD) (11.4%). Other etiologies of AF noted in our cohort were reactive airway diseases (7%), thyroid disorders (3%), diabetes (4%), hypertension (6%), chronic kidney disease (7%), repaired congenital heart disease and respiratory infections (5.7%). Around half of the patients had prior history of heart failure events, with valvular AF subgroup having the highest events (47.2%) amongst all. Past thromboembolic events were noted in 16% of patients, with valvular AF patients having numerically higher events than other groups. However, the difference was not statistically significant (p=0.803). About 40% patients had clinical evidence of heart failure on presentation as evidenced by elevated JVP and/or basal crepitations. Majority of our study patients were on beta blockers(85%) and calcium channel blockers(35%) for rate control. Digoxin use was noted in a small number of patients (14.2%). Only one-fifth of the study population were on oral anticoagulants (Vitamin K antagonists). 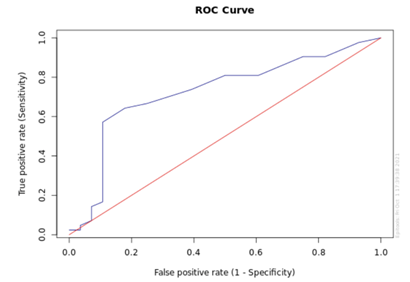 In the current study, D-dimer levels has been shown to detect patients with heart failure or thromboembolic events (AUC 0.727). Using a d-dimer level threshold of 60 ng/ml in AF patients, high negative predictive value of 98% was noted for detection of left atrial thrombus [17]. Other smaller studies have also demonstrated that higher D-dimer values may be associated with the presence of atrial thrombus and may predict adverse outcomes and death [18]. Our study showed that D-dimer levels of 1.1 mg/ml and higher could detect patients with history of adverse events. Another study by Kim et al. in patients with non- valvular AF and ischemic stroke showed that D-dimer levels were significantly higher in those having left atrial enlargement [19]. The current study also found a positive correlation between LA size and D-dimer levels. However, the strength of association was not very strong. Patients with increased LA size are more likely to have thromboembolic events in past and would be receiving oral anticoagulants which could have altered D-dimer levels. Larger studies are required to evaluate this association in anticoagulant naïve patients.

Identifying patients with high D-dimer levels and risk stratifying them will help to improve monitoring and management, while preventing future adverse events. D-dimer levels may also be used to modulate the intensity of anticoagulation therapy in high-risk patients. Patient awareness regarding adherence to therapy can also be benefitted by risk stratification using a simple biomarker. All these strategies will help us to reduce the major adverse event rates in patients with atrial fibrillation.

Strengths of the current study include evaluation of D-dimer levels in different subgroups of AF patients, determining association between D-dimer levels and adverse events and finding a cut-off level for risk stratifying high risk patients. There were also inherent limitations in the study. First, it was a single center study with small sample size which makes it difficult to generalize the results obtained on the entire AF population. Second, this was a cross sectional study and patients were not followed up serially due to logistic reasons. Long term follow up studies are needed to prove the hypothesis being postulated in our study. Third, both patients on and off anticoagulation were included in the study which affected the D-dimer levels and may have affected the final result. Fourth, D-dimer levels were compared against standard reference lab values. Using a matched control group from the normal population would have improved the yield of the study. However, the same could not be done due to technical constraints. Fifth, the time difference between adverse events and D-dimer estimation was variable amongst patients, it being a cross-sectional study. This could have influenced the D-dimer levels.

D-dimer levels are high in atrial fibrillation patients with rheumatic heart disease and non-ischemic cardiomyopathy. Higher D-dimer levels in this subset of patients place them at high risk of developing cardiovascular adverse events in the long term.

AM and PKS had access to all data regarding the study. AM, PKS and JS were involved in study design and patient selection process. AM and VO were involved in manuscript preparation, statistical analysis and figure designs. All the authors reviewed the final manuscript and approved it.

None of the authors have any conflict of interest to declare.