Incidence of Stroke in On-Pump Versus Off-Pump Coronary Artery Bypass Grafting: A Metanalysis on 11,500 Patients

# - Authors equally contributed to the paper

Background and Aims: Conventional coronary artery bypass grafting (CCABG) has been associated with high incidence of stroke, especially for the high degree of aortic manipulation. Off-pump CABG (OPCAB) theoretically represents a valid option, since the avoidance of aortic manipulation can prevent the embolization of atherosclerotic debris. There is a lot of controversy about the outcomes of CCABG compared to OPCAB. The aim of this metanalysis is to examine the incidence of stroke within 30 days from the surgical procedure.

Methods and Results: A literature search was conducted from 2009 to 2019 using PubMed database. Nine randomized control trials were included in the metanalysis.

Conclusion: Compared to the CCABG, no advantage was detected in the OPCAB group in terms of stroke.

Conventional coronary artery bypass grafting (CCABG) has been associated with high incidence of adverse neurocognitive events (1). The synergic contribution of aortic manipulation and the systemic inflammatory response triggered by the extracorporeal circulation (ECC) appear to play a major role in the onset of neurological events [1-3].

Off-pump CABG (OPCAB), especially performed by means of the no-touch technique, theoretically represents a valid option for patients with extracardiac arteriopathy and diseased aorta, since the avoidance of aortic manipulation can prevent the embolization of atherosclerotic debris [4].

Nevertheless, the superiority of OPCAB in the reduction of short-term complications has not been ultimately established, being this topic still object of intense debates.

Therefore, the aim of this systematic review and metanalysis is to incorporate the results of influential landmark trials comparing CCABG and OPCAB, in order to examine the incidence of stroke within 30 days from the surgical procedure.

Literature search was conducted for relevant randomized control trials (RCTs) comparing OPCAB with CCABG through PubMed database, in conformity to the Preferred Reporting Items for Systematic Reviews and Meta-Analyses statement [5]. In addition, references from the retrieved relevant publications were checked for additional studies. The search strategy was determined by two authors (WA and MdJ), and consequently approved by a third reviewer (LRM).

The following keywords were used for the search: “Stroke” AND “Off Pump Coronary Artery Bypass” OR “OPCAB” OR “Off-pump” AND “Beating Heart Coronary Artery Bypass”. In order to maximize the efficiency of the literature retrieval, the following search filters were employed: (a) human’s studies, (b) full text availability, (c) English language, and (d) published in the last 10 years (2009 – 2019).

Studies were screened at the title/abstract level for relevancy and eligibility and consequently retrieved after full text analysis provided that the following inclusion criteria were met: (a) human studies, (b) patients with coronary heart disease (CHD), (c) patients older than 60 years, (d) RCTs, (e) investigation of outcomes at 30 days after the surgery. Articles were excluded in case the following conditions were satisfied: (a) mini-invasive surgical procedure through small incision and/or aided by thoracoscopy, (b) studies including patients with seriously poor left ventricular function, renal insufficiency, or malignancies, (c) non-RCTs, (d) reviews/metanalyses, letters, conferences, case reports, and (e) in vitro studies.

To avoid risk of bias, the Cochrane Collaboration’s tool was systematically applied [6]. This checklist is used to assess the validity of randomized trials. Table 1 shows that the items upon which establish the validity of the papers included in the metanalysis are: random sequence generation, allocation concealment, blinding of participants and personnel, blinding of outcome assessment, incomplete outcome data, selective outcome reporting, and other sources of bias. Two researchers (WA and MdJ) were responsible for conducting the ratings.

The endpoint of this metanalysis was to investigate the incidence of stroke within 30 days after the surgical procedure. Stroke was defined as the focal or global neurological damage subsequent to vascular accidents, occurring after the procedure in patients who initially showed consciousness and neurological integrity after the surgery [3]. Furthermore, in order to be defined as stroke, the cerebrovascular accident would have been persisted for more than 24 hours [3].

Meta-analysis was conducted using R software v.3.6.1 (R Foundation for Statistical Computing. Vienna, Austria) and Comprehensive Meta? Analysis v.2.2 (Biostat, Englewood, New Jersey). The main statistical indexes utilized were cumulative incidence and 95% confidence interval (CI). A comparison between the event incidence of each group was performed by calculating the odds ratio (OR). The data was analyzed using a random effect model to overcome the high level of heterogeneity expected. The proportion of variability amongst the studies was established by means of the statistical inconsistency Higgin’s I2 test [7]. The Higgin’s I2 test can have different values, ranging from 0% to 100%.

The process of article selection and screening, with the rationale behind the exclusion is showed in Figure 1. The initial total number of studies found was 55. Among these 55 potentially relevant studies retrieved for scrutiny, only 9 randomized clinical trials met the selection criteria and were included for data abstraction [9-17]. 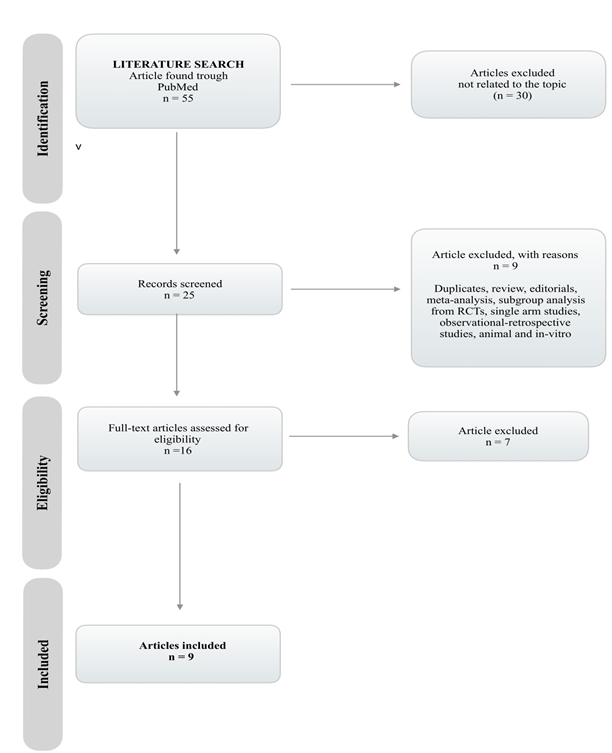 The onset of stroke after conventional coronary artery bypass grafting (CCABG) represents a disabling and life-threatening complication, implying permeant disability and increased mortality [18, 19]. The incidence of cerebrovascular accidents following the surgical procedure has been related to the degree of aortic manipulation [3]. Indeed, handling of the aorta increases the risk of embolization of lipid debris originating from the atherosclerotic plaque [4]. The cardiopulmonary bypass (CPB) per se can be responsible for the genesis of solid and gaseous emboli, respectively as a result of inadequate anticoagulation and initiation of CPB [20]. In CCABG, ascending aorta is manipulated in four circumstances, being them the anastomosis of the proximal grafts, insertion and removal of the cross-clamp, aortic cannulation and cannulation for the delivery of the cardioplegic solution [21, 22]. Furthermore, the risks associated to CCABG are ascribable to the systemic inflammatory responses and activation of coagulation pathways, as a consequence of the extensive contact between blood and the surfaces characterizing the circuit of CPB [23, 24]. Therefore, theoretically the employment of off-pump techniques should be able to hinder the aforementioned downsides of CCABG.

However, the utilization of such a technique is still highly debated. The controversy arises because of the inconsistent results in current literature. In fact, some studies proved a reduction in the incidence of early stroke of embolic nature and inflammatory response [25-28], whereas others showed no significant difference between CCABG and OPCAB [29-31]. Despite the theoretical advantages of OPCAB in terms of stroke, in the 11,478 patients that our metanalysis encompassed, the incidence of stroke was comparable in the two groups (CCABG vs OPCAB). The results of our analysis are compatible to the conclusions reached by Deppe et al. [32], who observed no difference in the incidence of stroke between CCABG and OPCAB in a cohort of 16,904 patients. The latter study stresses on the importance of an adequate clinical evaluation of the patients, since high risk individuals such as elderlies can benefit more from OPCAB. To regards of this point, we hypothesized that the comparable results that we have obtained might have been strongly influenced by the studies of Lamy et al. [12] and Vieira de Melo et al. [17], who did not detect any difference between the two groups. However, it is necessary to acknowledge that compared to the other seven papers included, these studies included a population of younger patients, who might not benefit as much as elderly ones from OPCAB. Hence, we believe that such a conclusion might hide the favorable outcomes that OPCAB can bear in relation to the advanced age of patients. In fact, OPCAB has been proved to be superior in octogenarian patients in terms of stroke and in-hospital mortality [33-35]. Indeed, octogenarians can be more susceptible to the negative implications of CPB, being them more sensitive to hemodilution, the continuous arterial flow and the massive inflammatory response cause by CPB [36].

Furthermore, the outcome of our analysis can be attributed to the fact that in OPCAB the utilization of side-clamp, “anaortic” technique (with or without automated device) or semi-automated anastomotic devices does not annul the risk of embolization. Moller et al. [14] reported no difference between the two groups examined, by employing in the majority of cases a side-clamp. Indeed, as described by Eldaif et al. [37], partial clamp does not protect against the formation of solid emboli because it still involves a certain degree of aortic manipulation. Particularly, as it occurs in cross-clamping, clamp removal is responsible for the greatest amount of emboli formation [37]. As regards of the no-touch technique, gaseous microemboli can either be generated during the arteriotomy or can come from the venous line and reach the systemic circulation via a patent foramen ovale [20]. Moreover, the activation of coagulation pathways as a result of the inflammatory response is responsible for the increased systemic prothrombotic activity. Thrombus formation can occur in any cardiac chamber or in pre-existent atherosclerotic lesions, potentially causing stroke [38]. As previously mentioned in relation to anastomotic devices, the employment of these tools does not cancel the risk of emboli creation. Hand-sewn anastomotic devices still carry risks related to their relative invasive nature, which is accountable for both fragmentation of lipid material of the plaque and creation of gaseous emboli [39]. This phenomenon is confirmed by the results of Hlavicka et al. [10], who actually showed no significant difference in terms of stroke incidence in OPCAB compared to CCABG, by adopting manual anastomotic devices. Thus, despite these devices have been appointed as successful in reducing the degree of aortic manipulation, it must be acknowledged that their insertion and removal is responsible for microemboli. Thus, in the execution of subsequent anastomoses, the continuous insertion/removal of the device can cause dislocation of lipid material present in the arterial wall [40].

This metanalysis has some limitations that need being addressed. Firstly, the number of enrolled studies is not large enough to draw a conclusion. Secondly, the absence of specific data concerning only the group of patients with stroke did not allow us to run further statistical analyses. Thirdly, the employment by each study of different operative techniques and varying definition of the outcome might have been responsible for the heterogeneity.

In conclusion, OPCAB had no notable effect on stroke when compared to CCABG, since they both achieved similar rates of stroke on short term follow-up. Further research is warranted in establishing predisposing factors for the incidence of stroke in OPCAB.

The authors received no financial support for the research and/or authorship of this article.