Escherichia coli is a type of bacteria that has evolved yearly, such as resistance to various antibiotics. Honey consumption can improve the quality of individual health. It has the potential to inhibit the growth of Escherichia coli. This study aimed to characterize the Escherichia coli ATCC 33218, and to investigate the inhibitory activity of Ceiba' honey against this strain. We obtained Ceiba' honey from the honey farm of Ceiba petandra. The antibiotic sensitivity tests revealed that the strain used in this study is not ESBL strain. Even it is resistant to Ampicillin, Amoxycillin, Penicillin, and Oxacillin and is sensitive to Cefotaxime. This study runs inhibition zone, MIC, MBC, and time-kill growth experiments to evaluate the inhibitory activity of Ceiba' honey. It showed a strong inhibition zone. Its MIC and MBC were 30 and 40%, respectively. The time-kill growth experiments revealed its inhibition by lowering the lag phase, slowing the growth rate, and decreasing the biomass yield of strain. In conclusion, Escherrichia coli ATCC 33218 is not an ESBL strain. Furthermore, Ceiba' honey has inhibitory and killing power against Escherichia coli ATCC 33218.

Escherichia coli is one of the normal bacteria in the human digestive tract. However, E. coli can cause harm to humans because this bacterium can become pathogenic and cause disease in the human digestive tract [1]. In its development, E. coli has evolved as a result of resistance to the use of antibiotics. The ability of E. coli to withstand the effects of antibiotics is a new defense strategy referred to by the term "resistance mechanism" [2]. This resistance indicates that fewer antibiotic options will be available to treat infections caused by E. coli [3]. Increased antibiotic resistance is a problem in the health care center and the community, in the form of an increase in the incidence of infection [4,5]. The search for new antibiotics requires a long process and time [6]. Interestingly, Indonesian people widely use honey to improve the process of healing [7]. Especially during the COVID-19 (Corona virus diseases-19) pandemic, the consumption of honey has increased for health reasons [8]. Honey is a liquid that has a syrup-like form. It is condensed and has a sweet taste. Particular bees (Apis mellifera) produce it from flower nectar. In the case of Ceiba' honey, the tree plantation of Ceiba pentandra is the best production site. This honey is brownish yellow and slightly thick. Most of the Ceiba' honey production collected by beekeepers is in Ceiba plantation areas of C. pentandra in Central Java and East Java [9,10]. C. pentandra (local name: kapok or randu tree) grows in Asia countries, such as India, Indonesia, Thailand, and the Philippines. The kapok tree serves as a host for honey bees. This plant is cultivated in the tropics because it requires conditions with high rainfall levels [11]. Ceiba' honey is relatively cheaper than other kinds of honey in Indonesia. It is rich in minerals such as potassium, magnesium, chlorine, sodium, iron, sulfur, and phosphate. It is also rich in thiamin (B1), riboflavin (B2), niacin (B3), pyridoxine (B6), ascorbic acid (C), vitamin K, biotin, pantothenic acid, and folic acid [12,13]. Its antibacterial properties depend on its low pH, high sugar concentration, and the presence of H2O2. With a high sugar concentration, bacteria lose water due to osmotic pressure and dry out, while a low pH inhibits bacterial growth [9,10]. Some studies found that a mixture of H2O2 and ascorbic acid produced an antibacterial mechanism that increased lysozyme lysis and bacterial death [9]. Glucose oxidase activity produces H2O2 aerobically from glucose. The function of H2O2 in honey is to prevent damage from raw Honey [10]. In addition, organic compounds in honey, such as polyphenols and glycosides, have antibacterial activities. They can damage the integrity of the cell wall so that they can kill the bacteria [14]. Flavonoid compounds in the honey can inhibit the nucleic acid synthesis and the cytoplasmic function of the target bacterial membrane [9]. The objectives of this study were to characterize the morphology and the antibiotic sensitivity of Escherichia coli ATCC 33218 to determine whether the strain is ESBL strain; to investigate the antibiotic activity of Ceiba' honey against Escherichia coli ATCC 33218. We used IZ, MIC, MBC, and time-kill growth tests to evaluate the antibacterial activity of Ceiba' honey against E.coli.

The strain used in this study was Escherichia coli ATCC 33218 obtained from the Laboratory of Microbiology of this university. The strain was maintained in nutrient agar (Oxoid CM003) at 37°C and pH 4.5 [1]. The colony and microscopic characteristics of the strain were checked regularly. 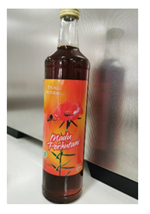 The bacterial suspension was spread in nutrient agar containing Petri disc. Small wells with 0.5 cm diameter were prepared and filled with 50 µL of Ceiba; honey. Incubation was at 37°C for 24 hours. The inhibition zones were measured [15].

Serial concentrations of original Ceiba' honey tested for MIC and MBC were 10, 20, 30, 40, 50, 60, and 80%. The overnight bacterial suspensions (0.5 McFarland) were inoculated into the honey and nutrient broth-containing test tubes. MIC is an antibacterial test solution at a minimal level that can inhibit bacterial growth. Then, the solution specified as MIC and other solutions in the next step will be streaked on McConkey agar media and incubated at 37oC for 24 hours. The no-growth with a minimum concentration of honey is called MBC.

Time-kill growth was carried out using Personal Reactor (RTS-1) BioSan. Bioreactor tubes (falcon tubes) were filled with nutrient broth and different concentrations of honey. The tube was placed into the Bioreactor, then rotated at a speed of 1000 rpm and a wavelength of 850 nm for 24 hours. The culture's optical density was automatically measured by the sensor and recorded by the computer system of the Biosan. From the computer system, we could obtain the growth curve. Calculating the lag phase, growth rate, and biomass yield followed the information obtained from the computer system of Biosan. 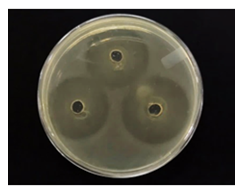 The test results (Figure 3) showed that the 50µL volume had an inhibition zone of 44.10 mm. Therefore, Ceiba’ honey has a powerful inhibition capacity.

Figure 4: Before (A) and after (B) incubation results. 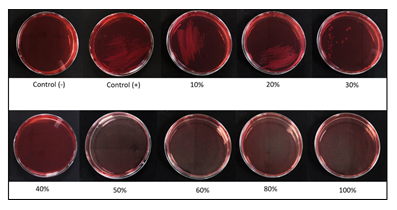 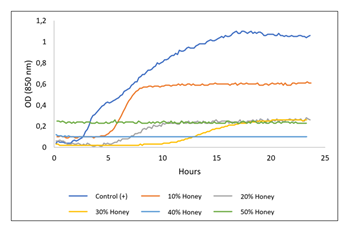 The strain we investigated in this study is not ESBL strain. Previously, we hoped that this strain belonged to ESBL strain. Nevertheless, the strain ATCC 33218 is a multi-drug resistance (MDR). ESBL-producing Escherichia coli should be resistant to cefotaxime [18]. This study proved that Ceiba' honey has potent inhibitory activity against Escherichia coli ATCC 33218. This capacity depends on its bioactive compounds that have antibacterial activity. Several bioactive compounds contribute to the antimicrobial activity of honey. These substances are associated with antioxidants and protein compounds, such as polyphenols, lysozyme, flavonoids, and other phenolic compounds, methylglyoxal, inhibin, glycosides, and peptides bee. They generally have antibacterial properties by damaging the integrity of the cell wall so that they can inhibit or kill. Flavonoid compounds act by inhibiting the nucleic acid synthesis and the cytoplasmic function of the target bacterial membrane [9]. In addition, other factors such as low pH, high sugar concentration (osmotic nature), and the presence of H2O2 are also essential [9,10]. These factors depend on several aspects, such as honey harvesting time, moisture content, color, taste, and aroma of honey [13]. With the rise in the prevalence of antibiotic-resistant bacteria, honey is increasingly valued for its antibacterial activity, not only against E. coli but also too many other bacteria, Bacillus subtilis, methicillin-resistant Staphylococcus aureus, extended-spectrum beta-lactamase-producing Escherichia coli, ciprofloxacin-resistant Pseudomonas aeruginosa, and vancomycin-resistant Enterococcus faecium. [19].

This experiment showed that the ATCC 33218 is not ESBL strain. Ceiba' honey has powerful inhibitory activity against Escherichia coli. MIC, MBC, and time-kill growth data confirmed this inhibitory activity. Further research can be carried out using other bacterial species, other types of honey originating, and the preparative extraction process.