Background: To evaluate the prevalence of alpha- and beta-thalassemia in Ji'an City, Jiangxi Province, 28,941 residents in the region were genetically screened to identify various thalassemia genotypes.

Methods: High-throughput amplicon sequencing was used to screen 301 thalassemia alleles in 28,941 people in the region. Pregnant women were the focus of this screening, and if a pregnant woman had mutations in a thalassemia-causing gene, her spouse was also genetically screened.

Conclusions: This research demonstrates the critical nature of large-scale population screening and that comprehensive molecular epidemiology data are necessary for the proper prevention and treatment of thalassemia. The updated epidemiological data from this study may help the local government to focus on the severity of this disease and find some methods for resource allocation that is successful under limited resource conditions.

Hemoglobinopathy is a term that refers to any hereditary blood disease caused by an abnormal hemoglobin molecular structure or an abnormal rate of globin peptide synthesis (thalassemia) [1]. According to the affected globin gene, thalassemia is classified as alpha-thalassemia and beta-thalassemia. Clinically, there are many symptoms of thalassemia, from asymptomatic to lethal. Patients with such symptoms might be classified as having thalassemia minor, intermedia and major according to the clinical severity. Thalassemia is a condition that affects patients with the later two categories. The  severity of this condition is primarily determined by the  degree to which the α:non-α chain is imbalanced [2]. This monogenic disease is one of the most prevalent and harmful in the world, affecting the greatest number of people [3, 4]. It is estimated that 1-5% of the global population are carriers of thalassemia mutations [5]. Alpha- and beta-thalassemia are a growing health burden in a number of Asian nations [6]. Plans aimed at preventing and effectively managing these diseases have the potential to considerably improve health indexes in many developing countries [7]. Accurate population frequency data are necessary for develop-ment of these programs.

In China, the high-incidence areas of thalassemia include Guangdong, Guangxi, Hainan, Yunnan, Guizhou, Sichuan, Chongqing, Hunan, Jiangxi and other southern regions [8, 9]. At present, apart from hematopoietic stem cell transplantation, there is no effective treatment for thalassemia major. Numerous individuals require lifelong blood transfusions and chelation therapy, and the only effective preventive methods for thalassemia major and thalassemia intermedia are carrier screening and prenatal diagn-osis [10]. For the correct prevention and treatment of thalassemia illness, comprehensive molecular epide-miology data are required. Thus far, significant volumes of genomic data have been generated by next-generation sequencing (NGS) in order to chara-cterize people's genetic makeup and assess potential health concerns. The scope of variation in thalas-semia appears to be more than previously described [11], and NGS is an excellent approach for screening for thalassemia-related variation.

Although a large-scale investigation of thalassemia has been conducted in recent years in various regions of China [4, 8, 12], the epidemiologic characteristics of thalassemia in people from Jiangxi Province, one of the high-prevalence areas, and particularly in those from Ji'an City, remain unknown [13]. Ji'an is located in Jiangxi Province's central region, covering an area of 25,300 square kilometers and housing a population of 4,956,600 people. It covers two districts, one city, and ten counties, including Jizhou District, Qingyuan District, Jinggangshan City, Ji'an County, Taihe County, and Wan'an County, Suichuan County, Yongxin County, Yongfeng County, and Jishui County, Xiajiang County, Anfu County, and Xingan County. The goal of this study was to determine the prevalence of thalassemia mutations in Ji'an City, Jiangxi Province, China, and to learn more about thalassemia's epidemiological characteristics.

In this study, our strategy was to screen pregnant women in the Ji'an region with high-throughput amplicon sequencing for the 301 thalassemia alleles (Table S1). This is a government-funded public health service program, and all pregnant women in the jurisdiction chose to participate in the free testing. If a pregnant woman is found as a thalassemia carrier, her spouse must also consent to a genetic test for thalassemia. The screening procedure in detail is depicted in Figure 1. This research was approved by the Ethics Committee of First People's Hospital of Ji'an, and all the participants signed written informed consent. Parents/legal guardians of participants under the age of 16 years provided written consent.

As previously described, a series of primers based on the features of three genes associated with alpha- and beta-thalassemia, HBA1, HBA2 and HBB, were created to facilitate gene amplification [4]. The primers are described in WO/2014/023076, WO/ 2014/023167, and CN102952877. The nondeletion alpha-thalassemia detection region is situated on chr16:226667-227546 and chr16:222863-223733 in HBA1 and HBA2, respectively; the nondeletion beta-thalassemia variation is located on chr11:5247713-5248438 and chr11:5246655-5247209 in the HBB gene. Briefly, multiplex PCR techniques were used to amplify and enrich the HBA1, HBA2, and HBB genes in a sample while also introducing a tag sequence for sample identification via fragmentation and ligation. The PCR products of a large number of samples (≤96 samples) were pooled into a library. Following library preparation, each library's DNA sequences were added with a linker sequence for sequencing and library identification. Libraries were pooled at equal molarity. The pooled libraries were sequenced with 2 × 100 paired end reads on a MGISEQ-2000.

We employed an in-house pipeline that includes numerous in-house programs and open-source soft-wares to perform quality controls on raw reads data, reads alignment to the human reference genome (UCSC build hg19), duplication marking, SNVs and Indels calling and annotation. Firstly, we used an in-house tool called GaeaFastqQC to perform quality control on the  sequencing data, removing low quality reads (reads with more than 10% unidentified base calls or more than 50% low quality base calls) and reads with sequencing adaptor contamination. We next utilized an open-source BWA (BWA 0.7.10, http://bio-bwa.sourceforge.net/) to align the clean data from the previous phase to the human genome reference sequences (hg19) using BWA-backtrack algorithm with parameters “-L -l 31 -i 10 -a 500 -e 21 -I -t 10”. This was followed by the use of two programs based on Picard tools (https://broad-institute.github.io/picard/) and GATK-Lite-2.3-9 (ftp://anonymous:anon@ftp.broadinstitute.org/pub/gsa/GenomeAnalysisTK/GenomeAnalysisTKLite-2.3-9-gdcdccbb.tar.bz2) to mark duplication, realign indel and recalibrate the base quality scores. Then program based on samtools was used to sort the bam result and generated the final bam files. SNVs and Indels were exported using GATK-Lite-2.3-9 with parameters “-genotype_likelihoods_model BOTH -stand_call_conf 30.0 -stand_emit_conf 10.0 -dbsnp file://${dbsnp} –noMultiSampleCall”. The two sets of variants were merged, filtered and sorted using an in-house program named mergeVariant. Finally, the HbVar [12] and IthaGenes [14] Database was used to annotate the detected SNPs and Indels.  The mutations were named in accordance with the published literature [15]. The complete procedure is depicted in Figure 2. 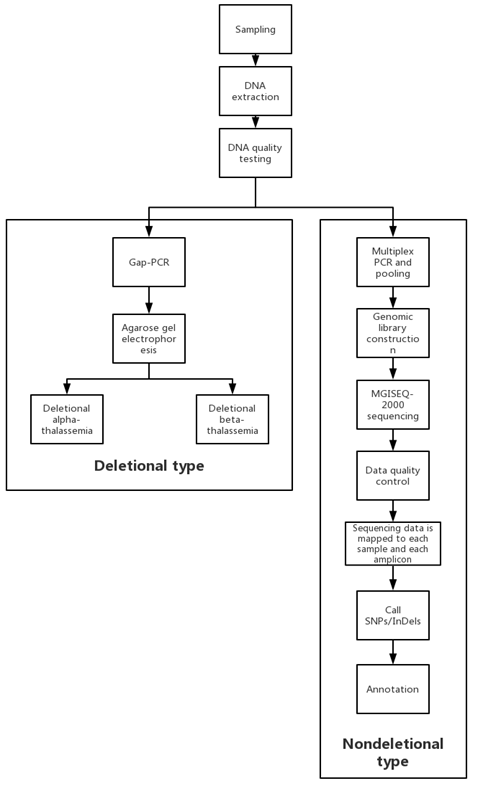 Figure 2: Diagram for the screening of hemoglobin variants and deletional and nondeletional alpha/beta-thalassemia.

Forty-eight subjects had both alpha- and beta-globin variants (Table 3). Among these carriers, 79.17% of the genotypes were composed of the common deletion of the alpha-globin gene (αα/-α3.7, αα/--SEA) and beta-globin gene point mutations, among which composite αα/--SEA and IVS-II-654 (C>T) beta+ heterozygosis was the most common genotype. Forty-six suspected couples were identified in this research. Among them, 22 couples, 16 couples and 8 couples had the risk of giving birth to Hb H disease patients, patients with Hb Bart's Hydrops fetalis syndrome and beta-thalassemia major patients, respectively. Among 126 people, 29 Hb variations were found, the majority of which were associated with normal phenotypes, however Hb Groene Hart, Hb Port Phillip, Hb Shenyang, and Hb Zurich-Albisrieden could show as cellule poor pigment anemia (Table 4).

Table 3: Genotypes of composite α and β-thalassemia in Ji'an Region.

Table 4: Hemoglobin variants in this cohort. 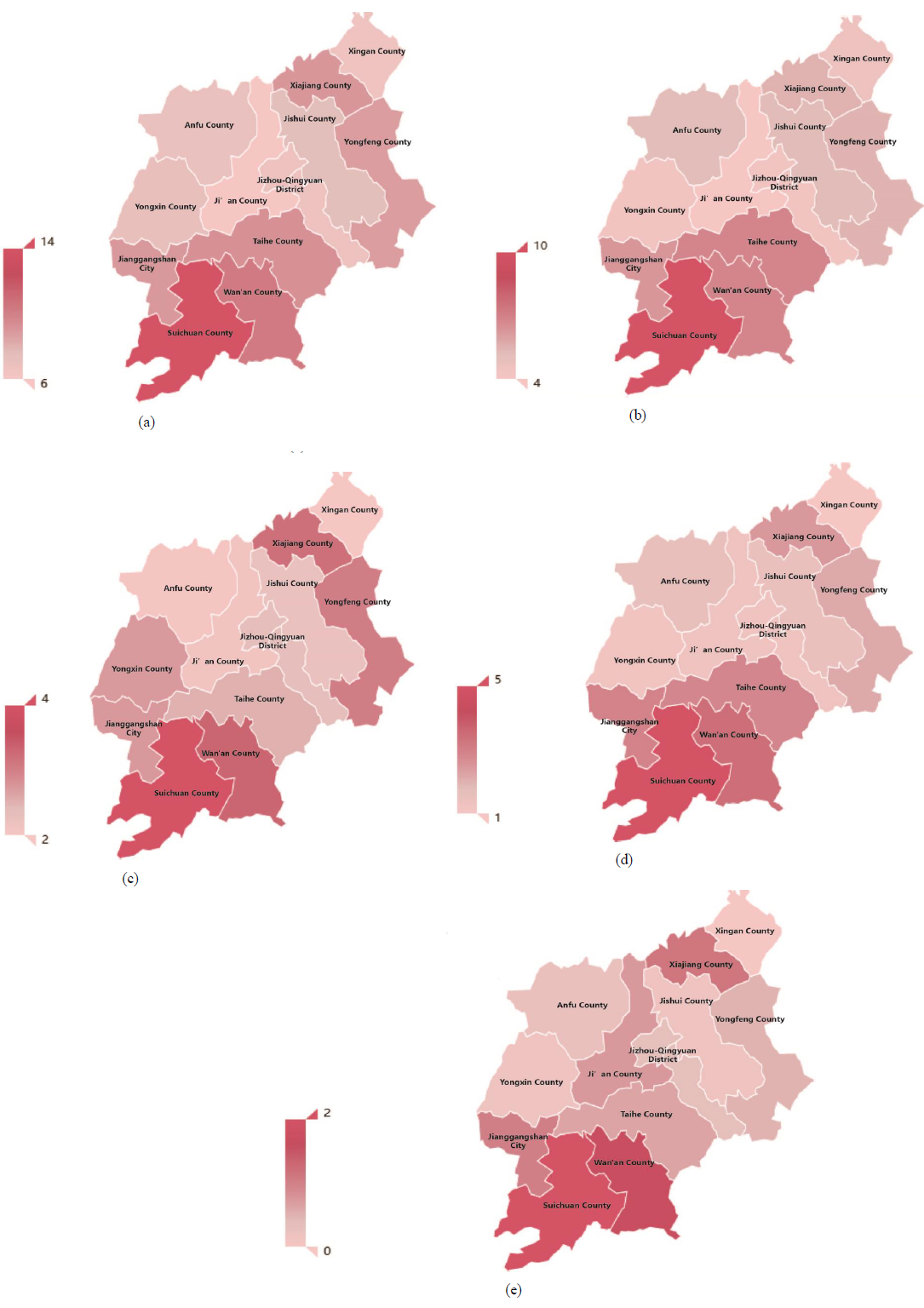 High-throughput amplicon sequencing were adopted to screen the 301 thalassemia alleles in this research, and the molecular epidemiology data of Ji'an was first comprehensively reported. In recent years, with the advancement and development of sequencing techniques, high-throughput sequencing can now test almost all mutations in thalassemia gene sequences; additionally, it has a high throughput and low cost, making it ideal for screening thalassemia genes and identifying rare alleles of thalassemia. At present, the three-step thalassemia screening program of routine blood samples (indexes: MCV>80 fL, MCH>27 and MCHC<320), Hb electrophoresis (indexes: HbA2>2.5%, HbA2<3.5% and HbF increases with abnormal Hb strips) and routine genetic testing is primarily used in clinical practice. Although the three-step screening program plays a significant role in the prevention and control of thalassemia, as screening technology has progressed, the method's flaws have become more evident, which are mostly reflected in the following features. (1) A routine blood test can only hint at the possibility of thalassemia; it cannot be used to make a conclusive diagnosis, and it may fail to detect thalassemia carriers who have normal MCV and MCH. In 2017, Zhu Baosheng of Yunnan Province's First People's Hospital led a team to investigate the thalassemia-carrying condition of 951 Dai Ethnic Minority Group members in Yunnan using routine blood and high-throughput sequencing strategies, and they discovered that the failed detection rate in routine blood screening was 17.1-23.4% [4]. (2) Hb electrophoresis testing is suitable for the definitive diagnosis of most carriers of β-thalassemia minor and thalassaemia patients (α and β), but it is insufficiently sensitive for the diagnosis of α-thalassemia carriers. According to research by Zhu et al., due to HbA2 >2.5, more than 90% of -α3.7/αα-type carriers failed to be detected using hemoglobin electrophoresis [4]. When it comes to detecting thalassemia, hemoglobin electrophoresis has a significant failure rate. (3) Routine genetic testing is mainly directed to the testing of 23 common gene types (3 deletion types and 3 mutation types of α-thalassemia and 17 mutation types of β-thalassemia); therefore, it cannot be utilized to screen for unusual kinds, resulting in a 2% failure rate. However, the NGS technique still has some limitations. For instance, Zebisch et al. identified the new mutation of ε-γ-δ-β thalassemia with MLPA and CGH, while NGS cannot test this mutation [19]. In light of the different variations in thalassemia, based on cost, different methods should be used in combination to comprehensively test for all variations of thalassemia.

In summary, we investigated the carrier rates of variations related to thalassemia in Ji'an using NGS and demonstrated the diversity of relevant variations. In this study, a novel mutation was discovered, demonstrating that applying NGS to routine thalassemia gene screening can effectively reduce the failed detection ratio of unique or rare genotypes and contribute to the improvement of thalassemia prevention and control. Domestic and foreign practices have illustrated that the birth rate of babies with thalassemia major can be effectively reduced through premarital and pregnancy physical examination, prenatal screening, prenatal diagnosis and other prevention and control measures. During the implementation process, the per capita cost of this program was kept within RMB 200. The screening strategy of first examining pregnant women and then deciding whether or not to test their spouses depending on the results was adopted, and this method may be a better method for thalassemia gene screening.

Our findings have significant implications for thalassemia prevention and treatment in this and other high-prevalence areas. The epidemiological data updated in this study may allow the local government to concentrate on the severity of the disease and devise methods for effective resource allocation under resource constraints.

No funding was obtained for this study.

LWM performed the data generation, processing, and analysis and prepared the paper and figures; YQ,SPC,HL and HRW contributed to data analysis and interpretation; LPG, JH, XW, YL contributed to result interpretation; JX, YF designed the study and carried out sample collection, storage and transport; All authors have read and approved the manuscript.

We are grateful to patients and their families who kindly consented to join the study.