A 49-year-old female following transesophageal echocardiogram (TEE) to investigate an undiagnosed cardiac murmur and progressive dyspnea on exertion was found to have isolated left-sided anomalous pulmonary venous connection of all veins draining into the coronary sinus. This unique lesion required novel repair by coronary sinus unroofing and atrial septal closure.

A transthoracic echocardiogram revealed an anomalous venous return to the coronary sinus without elevated right ventricular systolic pressures (30mmHg). Shunt fractions were estimated by echocardiography, and no right heart catherization was indicated. The suspicion for PAPVR was confirmed with transesophageal echocardiography and coronary CT angiogram that collectively demonstrated all three left pulmonary veins draining into the coronary sinus (Figure 1). No other structural or valvular abnormalities were noted, coronary arteries were normally oriented, right sided veins entered the left atrium at expected locations.

Median sternotomy was completed, systemic heparinization, placement of cardiopulmonary bypass, induction of systemic hypothermia (34°C) and myocardial preservation with Del Nido cardioplegia were performed. A generous portion of the anterior pericardium was harvested and fixed with glutaraldehyde for 5 minutes and then washed in saline till needed. A right atriotomy from the base of the right atrial appendage onto the broad surface of the atrium anterolaterally was created. The septum was carefully inspected to find a >10mm defect at the base of the fossa ovalis. Careful inspection of the coronary sinus revealed an enlarged orifice. The Eustachian valve was large, and the tricuspid valve was not regurgitant. The interatrial septum was aneurysmal and was resected, creating a large defect by combining the coronary sinus orifice with the existing PFO which facilitated a thorough inspection of the left atrium. A left ventricular vent was placed through the left atrial appendage and this demonstrated the mitral valve in the normal expected location, with the absence of veins on the left posterior wall of the left atrium. A 9 mm debakey dilator was introduced into the coronary sinus to stent it open, and unroofing of the coronary sinus to the orifice of the left veins was completed (Figure 2). The coronary sinus was unroofed creating a longitudinal tunnel to facilitate generous drainage of the left sided veins. All three orifices of the left veins were visible without obstruction through the coronary sinus, and the walls of the coronary sinus were resected to develop a trough. The prior fixed autologous pericardial patch was tailored to size, and was anastomosed in lid like fashion covering the orifice of the coronary sinus, and connecting the neo atrial level septal defect such that the baffle over the left pulmonary veins would drain into the left atrium while creating a small obligatory right to left shunt (Figure 3).

Postoperatively, the patient developed intractable nausea and dizziness. Axial imaging of the brain revealed hypodensity in the left posterior fossa, with a subacute ischemic infarct along the left PICA distribution.  Additionally, the left vertebral artery was noted to be locally occluded with focal dissection. No interventions were needed. She was discharged to the ward, convalesced expectedly without evidence of residual neurologic, renal, visceral, or peripheral malperfusion sequelae. Following discharge, she has been seen in the outpatient setting at baseline neurocognitive function with significant improvements in activity level and diminutive fatigue. 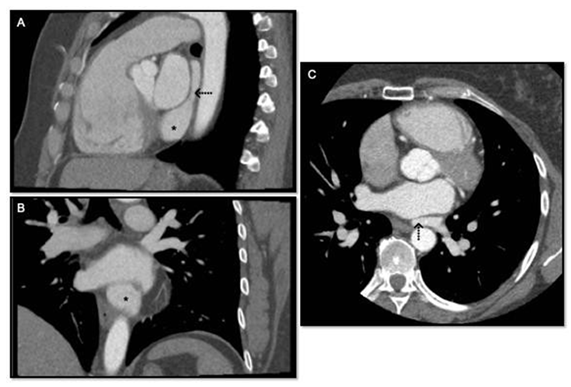 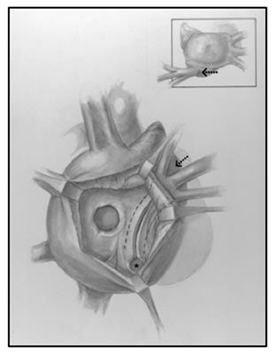 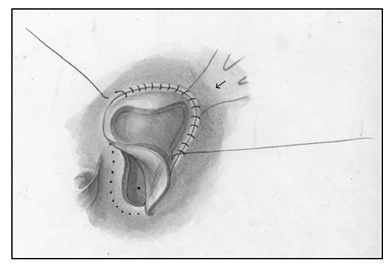 PAPVR historically does not have an associated untreated mortality rate, however, predisposes an individual to developing several complications such as fatigue, early exertional dyspnea, right ventricular dilation, tricuspid and pulmonary valve insufficiency, atrial arrhythmia, reduced ejection fraction, and pulmonary artery hypertension (PAH) which can be lethal. Given the myriad of anatomic variations of PAPVR lesions and depending on the severity of the lesion, the vast majority of patients are asymptomatic through childhood. Patients with symptomatic PAPVR usually present in early adulthood. The embryologic origin of left sided PAPVR typically starts around postnatal day 32, due to malregression of the primordial pulmonary trunk and the primitive posterior left atrium, along with concomitant maldevelopment of the sinus venosus, and the left common cardinal and right vitelline veins. Left sided PAPVR leads to physiologic left-to-right shunting. Atrial septal defects (ASD) are traditionally associated with partial anomalous pulmonary venous return, and up to 80% of patients with right sided PAPVR have concomitant ASD [5]. Of these, approximately 10–15% of patients have secundum ASD and 85% of patients have sinus venosus ASDs [6]. PAPVR is often associated with congenital syndromes such as Turner's [7]. Patients with or without symptoms and PAPVR with a Qp: Qs >1.5, moderate to severe tricuspid regurgitation (TR), pulmonary insufficiency, and dysfunction of the right ventricle are all indicated for surgical treatment to mitigate progressive right ventricular failure and irreversible pulmonary vascular disease [3]. Reports of total left sided PAPVR are very scant, and we describe a simple functional novel repair strategy in contrast to prior reports [8-10].

Partial anomalous pulmonary venous return (PAPVR) of all left pulmonary veins draining into the coronary sinus is a very rare congenital lesion discovered in adulthood, and can be treated with simple repair by coronary sinus unroofing and patch closure of atrial septal closure.

The authors have no financial conflicts of interest.