3Department of General and Vascular Surgery, Central Clinical Hospital of the Ministry of Internal Affairs and Administration, Warsaw, Poland

The risk of stroke in appropriately selected patients can be reduced through carotid endarterectomy. The main beneficent of operation are patients with at least 70% of ICA stenosis [1]. A stroke (or death) can be prevented with CEA in patients with asymptomatic ICA stenosis what has been reported in the Asymptomatic Carotid Artery Study [2].

Proton MR spectroscopy provides possibility of noninvasive chemical analysis of the brain in vivo as well as it allows estimation of relative changes in brain metabolites, including N-acetylaspartate (NAA), choline-containing compounds, and total creatine [6].

It is more sensitive than magnetic resonance imaging (MRI) in detection of changes related to decreased oxygen supply through the measurement of the metabolic changes that may occur before the morphologic changes. Studies have shown that the level of NAA in the brain may be interpreted as an index of neuronal viability [7] and that the choline level in the brain is associated with membrane synthesis or degeneration in neural tissues [8]. 1H-MRS may also provide information valuable for diagnosis and management of insufficient blood perfusion the brain at the primary stage.

These hypotheses were followed by studies in which 1H-MRS has been used for the evaluation of diverse pathologies of the brain [9-11]. Relative changes in choline and/or NAA following CEA have also been investigated by using 1H-MRS [12,13]. Correlations between concentration of cerebral metabolites measured in MR spectroscopy and neuropsychological function have been observed in patients suffering from idiopathic normal pressure hydrocephalus, with Alzheimer disease, mild cognitive impairment, and stroke.

The aim of this study was to investigate the changes of level of metabolites within the brain in patients after CEA with asymptomatic ICA stenosis and no signs of stroke on MRI.

Fourteen noninfarcted patients with stenosis of unilateral ICA who were scheduled to undergo CEA were included in our prospective study. All patients were having ipsilateral cervical internal carotid artery stenosis (≥70%) on ultrasonography and/or CT-angiography and were having no infarction in the area of the brain perfused by the middle cerebral artery confirmed by MR imaging, including FLAIR sequence, which was performed +/-1 day before surgery.

A 3 Tesla MRI scanner (Ingenia 3.0T, Philips, Amsterdam NL) imaging system was used for evaluation of ischemic lesions before and after surgery. Anatomic MR images were obtained with a FLAIR longTR sequence (repetition time 9s; echo time 125 ms). The slices were 4 mm thick with 1mm gap, and the matrix was 352 X 254. Proton MRS was performed using the double-spin echo sequence with a voxel size of 20 cm3. Volumes of interest were placed in the head of caudate nucleus, for which MR imaging confirmed the absence of infarction. Fluid-filled spaces such as ventricles and cerebral sulci were carefully omitted.

In each study one volume of interest was located on the side ipsilateral to stenotic artery and the other in the contralateral unaffected region in each patient (Figure 1). The areas of 3 major peaks, including choline (3.2 ppm), the sum of creatine and phosphocreatine (3.0 ppm), and NAA (2.0 ppm), were measured by the automated LCModel package.

As the peak intensity depends on the acquisition and processing parameters, no absolute metabolite quantification was attempted. Values relative to the peak of the sum of creatine and phosphocreatine at 3.0 ppm were given as results. This peak which is reflecting total creatine concentration is considered as constant value because of equilibrium between phosphocreatine and free creatine [14] within central nervous system and is known to be unchanged during the evolution of cerebral ischemia and under various pathologic conditions [15]. 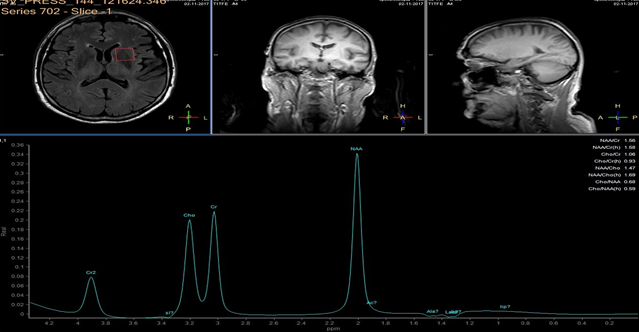 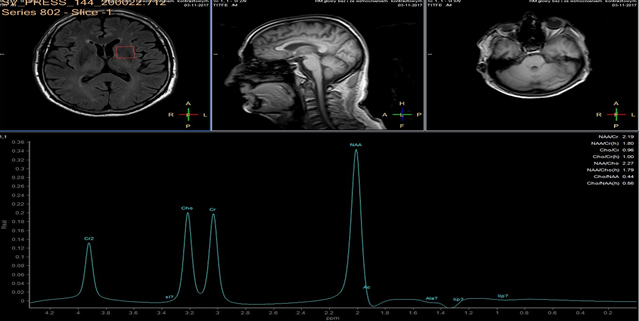 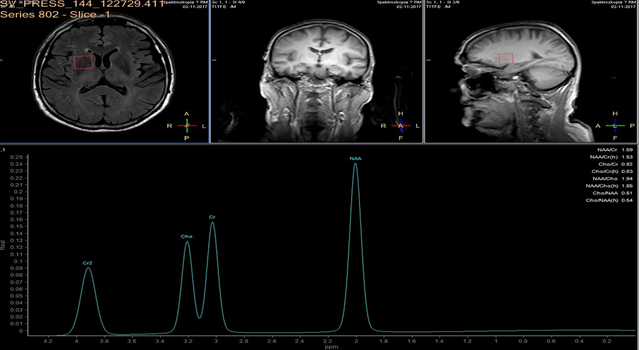 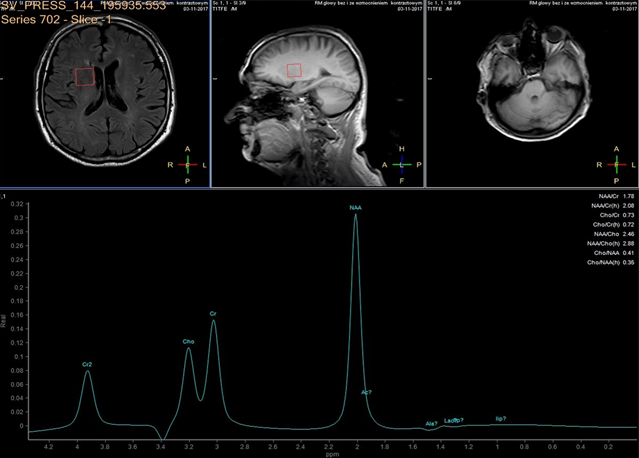 These were determined with a proton MR spectroscopy based on LC model and Naa/Cr ratios for deep nuclei of both cerebral hemispheres analysis. An asymmetry index, defined as (ipsilateral - contralateral)/(ipsilateral + contralateral) X 2 X 100%, was used to analyze the relationship between the relative MRS data and the stenosis of internal carotid artery.

Statistical significance was assessed with the Mann-Whitney test for comparing the patients' MRS data with that of the healthy volunteers. Linear regression analysis and the Pearson correlation coefficient were used to examine the relationship between the asymmetry index of MRS measurements and stenosis. P < 0.05 was considered significant.

Cho/Cr did not differ significantly between healthy volunteers and patients in either the affected or the unaffected hemisphere. Neither the asymmetry index of NAA/Cr nor the asymmetry index of Cho/Cr shown significant correlation with stenosis of ICE (r=0,12, P<0.05). Sufficient circulation through the circle of Willis on the contralateral side is a probable explanation of this fact.

Prior to surgery, in all patients the ratio of NAA to the sum of creatine and phosphocreatine (NAA/Cr) decreased and the ratio of choline to the sum of creatine and phosphocreatine (Cho/Cr) increased in the hemisphere ipsilateral to stenotic ICA compared with the contralateral side. Lactate peaks were observed in 2 patients. All patients underwent endarterectomy and follow up MR study within 24 hours after surgery. In all patients subtle increase of NAA/Cr level was seen (delta 0,38 ±0.73 (mean ±SD)) and decrease of lactates on the recanalised side was observed.

The metabolic changes were relatively subtle but were associated with surgical procedure. No relationship between metabolic abnormalities and neurological status of the patients has been observed.

1H-MRS confirms metabolic changes within the brain which may help in guiding treatment decisions and be useful for preoperative evaluation.

Metabolic changes revealed in the head of caudate nucleus can indicate a hemodynamically compromised state in patients with unilateral steno-occlusive carotid artery disease. It may help predict which patients will benefit from endarterectomy through improvement of neurological status. The anatomic and blood flow changes caused by hypoperfusion and stroke can be additionally evaluated with proton MRS in clinical settings, adding relevant metabolic information.

Our study was based on 3T proton MR spectroscopy. It was shown that postoperative changes in cerebral metabolites were not associated with changes in cognitive function after TEA or CAS confirmed in standard neurologic evaluation. Further investigations using different imaging modalities, such as positron-emission tomography, would be worth doing to confirm the relationship between changes in cerebral metabolism and change in cognitive function after surgical intervention.

Moreover an evaluation of cognitive function before and after treatment could reveal whether the change in brain metabolism has impact on cognitive functions. A large group prospective study would be needed to establish whether a postoperative changes in cerebral metabolites measured by 1H-MRS is associated with impairment or improvement in cognitive function after TEA or CAS.

None of the authors declared any conflict of interest.

The study has been approved by the local Bioethics Committee (Approval of the Ethics and Surveillance Committee for Research in Human and Animal Sciences at the Central Clinical Hospital of the Ministry of Internal Affairs; No. 54/2016 of 01.06.2016).

The written informed consent for surgical intervention as well as for performing MRI has been obtained from all patients participating in this study.

This work was supported by grant Nr 501-9-999-94-18 from the Centre of Postgraduate Medical Education.