Background: Previous predictors of mechanical dyssynchrony using echocardiography has not improved refractory heart failure in patients treated with cardiac resynchronization therapy. It was hypothesized that the spatially and temporary continuous information of the whole endocardium is required when the mechanical dyssynchrony is assessed using echocardiography. This study aimed to examine differences in the locus of the centroid of the left ventricle between wall motion abnormality.

Methods: Twenty-seven patients with dilated cardiomyopathy and 45 old myocardial infarction patients with aneurysm were compared with 188 individuals with normal wall motions. In an off-line system, the centroid of the three-dimensional left ventricle was defined as the central point between both centroids calculated from four- and two-chamber images using an original application.

Results: The locus of the centroid of the left ventricle (LCGLV) in the normal group showed a horizontally inverted β shape, whereas this shape was absent in the other groups. When corrected by left ventricular end-systolic volume, the total and each directional length of LCGLV in the abnormal wall motion groups were clearly reduced compared with those recorded in the normal group. The acceleration of the centroid was also reduced in the abnormal wall motion groups. Multiple linear regression analysis with a stepwise method revealed a corrected antero-posterior shift of the centroid of left ventricle by left ventricular end-systolic volume and N-terminal pro-brain natriuretic peptide, which strongly correlated with the LVEF (adjusted R2: 0.6818, p≤2.2 X 10-16).

Conclusion: Use of the LCGLV provides novel insight into the evaluation of abnormal left ventricular contractions.

In the last century, echocardiography emerged in the clinical field as a visualization tool for the evaluation of cardiac anatomical and pathological abnormalities, as well as the flow dynamics of heart diseases [1]. With the technological development, this diagnostic tool has contributed to the evaluation of cardiac diseases, such as cardiomyopathies, ischemic heart diseases, valvular heart diseases, etc. However, despite the development of several techniques, the objective judgement of the left ventricular (LV) wall motion remains a challenge. For example, it is recognized that cardiac resynchronization therapy is a therapeutic strategy for patients with medical resistant refractory heart failure in whom LV systolic function is severely reduced. The European Society of Cardiology guidelines established in 2016 and 2019 stated that patients with a symptomatic sinus rhythm, reduced LV ejection fraction (LVEF), prolonged conduction time which met the QRS duration ≥130 ms, and a left bundle branch block shape on an electrocardiogram could be responders to cardiac resynchronization therapy [2,3]. As demonstrated in the PROSPECT study [4] and ECHO-CRT trial [5], echocardiography is unable to identify responders to this novel therapeutic strategy. Previous echocardiographic assessment of mechanical dyssynchrony was limited to regional LV wall information utilizing a tissue Doppler technique or M-mode evaluation, although the heart is a three-dimensional moving muscle. Blood flow was also assessed using a pulse Doppler technique, which estimated the LV dysfunction using the time difference obtained from the blood stream at the LV and right ventricle inflow/outflow. Obviously, this was indirect information and did not critically reflect the whole LV wall motion. Therefore, the present author presumed that the accurate evaluation of LV dyssynchrony requires information for each wall of the heart during a consecutive cardiac cycle, particularly to determine the suitability of resynchronization therapy. In the present study, it was hypothesized that the centroid of the LV reflects a cardiac wall motion because this technique requires the spatial coordinates of each endocardial position on the LV wall with time information during a cardiac cycle. Therefore, the locus of the centroid could include information on each regional area, such as the presence of interstitial/replacement fibrosis which limits LV contraction. This study investigated the role of the locus of the centroid in the assessment of abnormal LV wall motion as a novel approach differentiated from previous methods.

Continuous digital videos of 633 patients, obtained from the clinical echocardiography laboratory from September 2016 to August 2017, were utilized in this study. Cases of dilated cardiomyopathy (DCM) and old myocardial infarction (OMI) with aneurysm were evaluated. Cases of valvular heart disease, OMI without aneurysm, congenital structure cardiac disease, pulmonary hypertension, and those with images of poor quality were excluded from the study. The remaining videos that showed normal wall motion (NWM) of the LV were also used in this study as control. The protocol of this retrospective study was approved by the SOYOKAZE CVD ethics committee (soyokaze-cvd, 2018-03). The purpose of this study was conveyed to the patients on the information board and the website homepage of the clinic. An opt-out option was provided to patients who did not wish to participate in the study.

Audio/video interleave files, obtained during one cardiac cycle using a trans-thoracic echocardiography equipped with a high-resolution sector probe (AVIUS; Hitachi Ltd., Tokyo, Japan), were evaluated. The two-dimensional speckle tracking algorithm (Hitachi Ltd.) is a pattern-matching method which forwards dozens of pixels into the region of interest (1 cm2) through an off-line system using an application termed ‘%WT’ programmed in e-Tool viewer (Hitachi Ltd.) [6,7]. In this off-line system, approximately 50 points were automatically allocated on the manually traced line as the border of the endocardium. The coordinates of each point, which were followed frame by frame during one cardiac cycle, were saved as a comma-separated value file.

2.3 Locus of the centroid of the LV

The data are shown as medians with the first and third quartile values because of a non-normal distribution of data. Qualitative data were assessed through Fisher’s exact test. Non-parametric data for each group were processed by Kruskal–Wallis analysis with a post-hoc method. Univariate and multivariate linear regression analyses were applied to identify the independent predictors of the LVEF. The correlation between the markers of the LV centroid and the measured data of LV diastolic function was evaluated by Spearman’s rank correlation coefficient. NT-proBNP and QRS duration on electrocardiography were also assessed using this correlation coefficient. A p-value <0.05 denoted a statistically significant association in the final model. All statistical analyses were performed with EZR (Saitama Medical Center, Jichi Medical University, Saitama, Japan), which is a graphical user interface for R (The R Foundation for Statistical Computing, Vienna, Austria). More precisely, it is a modified version of R commander designed to include additional statistical functions frequently used in biostatistics [8].

Table 1: Background information of patients in each group

Data are presented as medians with first and third quartile values.

Table 2: Physiological examination and biomarker data for each group 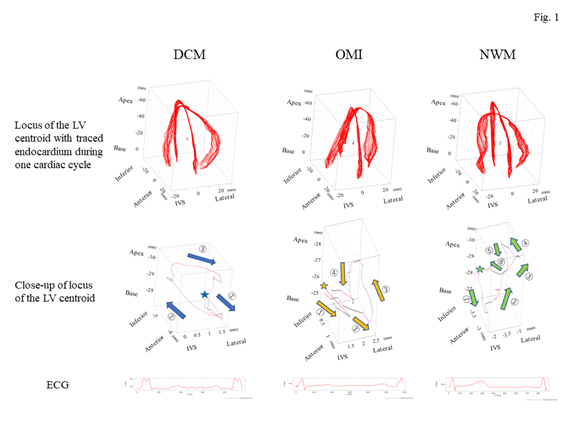 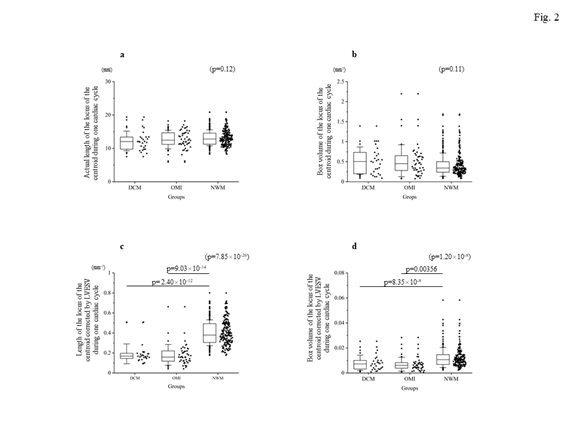 In the univariate analysis, the corrected data by LVESV of the LV centroid (concerning the distance, volume, and acceleration) together with the QRS duration, the value of NT-proBNP, and age were related to LVEF (Table 3). The corrected transfer distance for the longitudinal direction of the centroid by LVESV and the corrected total distance of the locus of centroid movement during one cardiac cycle by LVESV were excluded from the multivariate analysis because these data were considered variance inflation factors. Finally, a multivariate linear regression analysis revealed that an antero-posterior shift together with the transfer distance for the lateral direction of the LV centroid, NT-proBNP, and age were strong predictors of the LVEF (multiple R2: 0.5515; adjusted R2: 0.5367; p≤2.2×10-16) (Table 4).

Table 3: Univariate analysis for the prediction of LVEF

Table 4: Multivariate linear regression analysis for the prediction of the LVEF 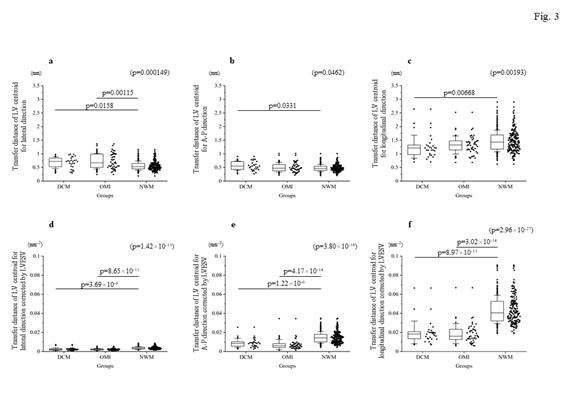 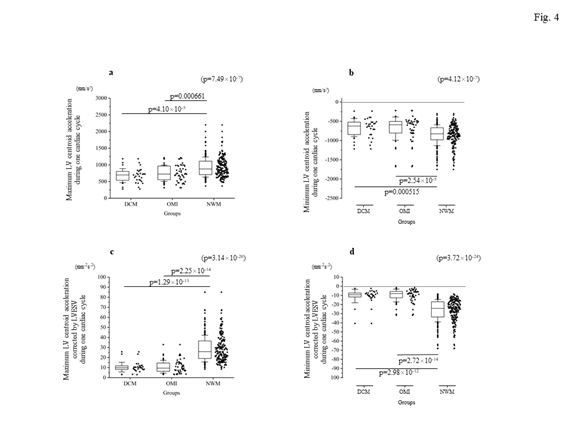 The present study compared several items derived from the locus of the LV centroid and the LVEF, which was a gold standard marker of LV systolic function. The objective of this investigation was to confirm that the locus of the LV centroid can predict LV systolic function. In addition, this study proposes a novel approach for the evaluation of abnormal LV wall motion. It was demonstrated that the LV centroid of the NWM group had moved like a mirror image of a β shape in a counterclockwise direction. In case of abnormal wall motion (e.g., dyssynchrony associated with DCM or LV aneurysm caused by an OMI), the corrected distance for any direction of the locus of the centroid by LVESV was significantly reduced compared with that noted for the NWM group, especially in the longitudinal direction. To increase the LVEF, it is suggested that the LV centroid had to shift toward the anterior direction in an early phase of LV contraction. In patients with an extended LV chamber, the length which the LV centroid had moved during one cardiac cycle was limited to the enlarged cavity. This is because the cardiac muscle is confined in the cardiac sac, which is constructed by a tight fibrous membrane. To obtain sufficient stroke volume from the LV cavity, the LV centroid had to shift to the frontal position into the LV during the early contraction phase. This is because the blood stream had to be directed toward a LV outflow rather than a LV inflow positioned in a mitral ring. After moving toward the apical direction, it returned to the original position with two loose loops, which might have been caused by the cardiac translation of a diastolic phase and an atrial kick. The evaluation of LV wall motion (e.g., asynergy or dyssynchrony) using echocardiography is often subjective and depends on the experience of the physicians and expert technicians. It has been reported that strain is a good evaluator of the regional asynergy of ischemic heart disease [9-11]. In contrast, there are no standard markers available for the evaluation of mechanical dyssynchrony. In the case of ischemic heart disease, the reduced wall motion results from the ischemia of the dominated area associated with each coronary artery. Therefore, strain could detect the different ischemic area from cardiomyopathies which exhibited scattered fibrosis in the any part of the heart. Several studies [12-16] reported that echocardiographic markers detected using a tissue Doppler method, a M-mode technique, and the pulse Doppler technique were useful for the evaluation of mechanical dyssynchrony. However, the PROSPECT trial demonstrated that the aforementioned echocardiographic parameters failed to identify the responders to cardiac resynchronization therapy [4] because those evaluations were restricted to local or indirect information of the LV wall. The results of this study proposed the LV centroid as a novel approach, which requires information on each point of the LV endocardium and each time point during a cardiac cycle. This method depends on the spatial and temporal information of the whole LV endocardium of the moving heart rather than selected information from a part of the LV and a limited time. Based on these facts, this novel approach may be useful for the selection of patients with mechanical dyssynchrony who could respond to cardiac resynchronization therapy. Patients exhibiting the following features may be responders to cardiac resynchronization therapy: 1) certified lesion viability in the area in which the LV wall motion was reduced; 2) simulation of a virtual LV wall motion after cardiac resynchronization therapy using a computing system, and 3) shift of the locus of the LV centroid toward an anterior direction in the early systolic phase using the virtual image. This is because LV good contraction does not always indicate an increase in LV systolic volume due to an increase in mitral regurgitation. In conclusion, the locus of the centroid of the LV associated with abnormal contraction of the heart did not resemble the mirror image of a β shape. Furthermore, the antero-posterior shift of the LV centroid was related to the LVEF. This novel approach may contribute to an objective evaluation of the LV mechanical dyssynchrony.

The author especially thanks Mr H. Hayashi for programing this original application.