Non-small cell lung cancer (NSCLC) is the second most diagnosed cancer in women. Research on this type of cancer has benefited from the development of precision medicine for several years. In this case study, elderly women was treated for an advanced NSCLC with brain localization and who has been treated by novel association, osimertinib and crizotinib, in front of dual mutation (EGFR and CMet). This combination of targeted therapies succeeded to partial response on primary lung tumor and total reduction on brain metastasis.

Lung cancer in women has been steadily increasing since the 1960s. This can mainly be explained by the increase in

smoking behavior among women [1]. Lung cancer in nonsmokers is the sixth most common cause of cancer death for women in the US. Among women who never smoke, nearly half of them present an Epidermal Growth Factor Receptor (EGFR) mutation. Until recently, first- or second-generation EGFR Tyrosine Kinase Inhibitors (TKI) were the recommended treatment. For this type of treatment, when treatment failure occurs (median time to progression 10 to 12 months), it is due – for more than half of the cases - by the addition of a T790M mutation. This mutation confers resistance but third generation TKI (osimertinib) can overcome it. The median progression free survival after introduction of osimertinib is around 12 months. Various mechanisms may explain disease progression under osimertinib but until now chemotherapy is the recommended option in this situation. A better comprehension of the mechanisms of disease progression may offer new opportunities of treatment. Among these mechanisms, MET amplification can explain 5 to 20 % of tumor progression. Crizotinib a TKI against ALK, ROS and MET may overcome resistance in combination with osimertinib. In this case study, we focused on a woman who developed under second line osimertinib a MET amplification and achieved disease control with the combination of full dose osimertinib and crizotinib.

This is a 71 years old woman who was diagnosed with metastatic non-small cell lung cancer (NSCLC). The disease involved the left lower lobe, pleura and multiple cerebral metastases. Molecular analysis was performed on primary tumor biopsy and revealed EGFR Del19mutation. Afatinib was introduced and permitted to obtain a Partial Response. After almost 2 years of treatment with afatinib (from January 2017 to November 2018), clinical progression was observed leading to chemotherapy treatment (Carboplatin + Pemetrexed, four cycles) in November 2018. The occurrence of renal failure, platinium salts mediated, limited the continuation of the treatment beyond the first cycle. A completed molecular analysis on liquid (DNAct) and tumor biopsy was performed and highlighted EGFR mutation, Del19, on both types of biopsy. Afatinib was reintroduced in June 2019. Therapeutic afatinib monitoring highlighted an biological optimal drug exposition, 23 ng/mL at plasma trough concentration [2]. Good control of the disease at the brain level was observed but the left lower lobar mass was progressing (Figure 1). A novel tumor biopsy revealed exon 14 cMet amplification and EGFR T790M additional mutation and afatinib was switched for osimertinib in September 2019. After 3 months of treatment, radiologic evaluation (scanner and IRM) have confirmed osimertinib effectiveness with neuro-meningeal regression and a patient performans status improvement. However, the disease progressed in the lungs and new lesions appeared on adrenal gland and extensive intra-abdominal lymphadenopathy. Given the cMET amplification evidence on lung biopsy, it was therefore decided to consider osimertinib and cMet inhibitor, crizotinib, dual therapy in January 2020. After 2 months of treatment, radiologic evolution showed a complete response on brain metastasis, regression of lung disease and stabilization of the disease otherwise (Figure 1). Three months before starting this combination of treatment, the patient had language and balance problems which are fully resolved now as the CNS metastasis regressed. 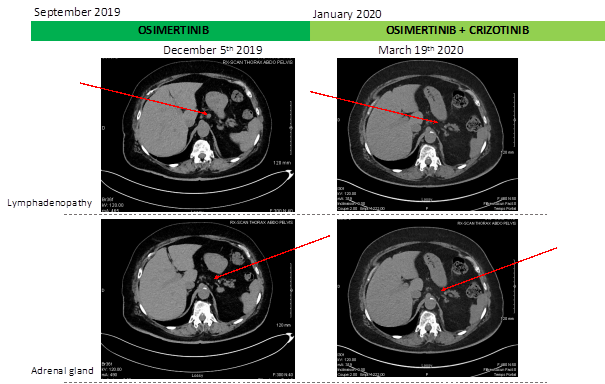 Figure 1: Schematic summary of treatment course and radiologic evolution of lymphadenopathy and adrenal gland during treatment.

For our patient with advanced NSCLC with CNS localization, association of crizotinib and osimertinib have modified the patient's poor prognosis and lead to a complete response on brain metastasis with partial response in lung localization. This has been made possible by routine clinical research into specific molecular variants of lung cancer (EGFR pathway, cMet, Alk, …). Occurrence of cMet mutation or coexisting of T790 mutation and cMet amplification is very rare with 3% of occurrence on NSCLC but already known as EGFR inhibitor biomarker of therapeutic escape (5-20% of case) [3, 4]. No targeted therapies are FDA or EMA approved to target MET amplification, but crizotinib has demonstrated in vitro and in vivo efficacy [5]. Comprehensive genomic profiling can lead to novel approach of cancer treatment and a personalized medicine in oncology. One-third of EGFR mutant NSCLC develop CNS metastasis [6]. Osimertinib has improved blood-brain-barrier penetration and its activity against brain metastasis has been demonstrated in AURA and FLAURA study [7, 8], and confirmed for this patient. A retrospective nationwide population-based cohort study in South Korea highlighted that female sex is a factor associated with subsequent brain metastasis in NSCLC [9]. Nevertheless, female sex was a prevalent factor to long-term survival of lung cancer with brain metastasis [10]. This elderly patient had benefited of a treatment tailored to her pathology and genomic profile at full dosage and optimal tolerance. Age does not appear to be a limiting factor of targeted therapies treatment. Despite the effectiveness of the osimertinib and crizotinib combination, it is now necessary to evaluate its efficacy and safety in prospective clinical trials.

No Conflicts of interest for all authors