Background: The radiological or interventional use of contrast medium exposes patients to a risk of contrast-induced nephropathy. Pre-existing kidney failure is a major risk factor. Point-of-Care Capillary blood creatinine tests are promising; their speed might help to optimize treatment decisions and patient care in these situations.

Conclusion: Rapid Point-of Care Capillary creatinine test is an easy-to-use, accurate tool for detecting kidney failure before a patient is exposed to procedures involving contrast medium. The POC test performed less well in patients over the age of 75 and in patients with high plasma creatinine level

The use of iodinated contrast agents in radiological examinations and interventional procedures (e.g. coronary angiography) is major: in 2003, 8 million litres of these compounds were used worldwide in 80 million procedures [1]. The use of iodinated contrast agents exposes the patient to a risk of Contrast-Induced Nephropathy (CIN), which is one of the most frequent types of in-hospital acute kidney injury [2]. The consensus definition of CIN is an absolute increase in plasma creatinine concentration from baseline of at least 44 µmol/l or a relative increase of at least >25% within 72 h of the intravascular injection of iodinated contrast agents, in the absence of any identifiable alternative cause for the increase [3]. The occurrence of prolonged kidney injury after coronary angiography is associated with an elevated long-term risk of mortality [4,5] and renal replacement therapy. Contrast-induced nephropathy also prolongs the length of hospital stay [6].

The prevention of CIN is mainly based on the removal of modifiable risk factors (renal hypoperfusion, anaemia, the concomitant use of nephrotoxic drugs, etc.) and the identification of high-risk patients (age>75, diabetes, chronic renal disease, myeloma, heart failure, etc.) [7]. To this end, several scores for predicting the occurrence of CIN have been developed in the last few years [8]. For example, Duan et al recently described a pre-procedure risk score for contrast-induced acute kidney injury that took account of five variables: age, plasma levels of creatinine (in μmol/l), N-terminal pro B-type natriuretic peptide and ultrasensitive C-reactive protein, and primary percutaneous coronary intervention. The score was used to classify patients’ level of risk as low, moderate, high or very high with a good degree of discrimination (C statistic [95% Confidence Interval (CI)] = 0.809 [0.749-0.870]) and a higher predictive value than for previously validated scores [9]. Duan et al. found that pre-existing kidney failure was the main risk factor for CIN. In an emergency setting, the turnaround time for conventional laboratory assays remains a key issue; a bedside diagnosis of kidney failure is not possible. Rapid Point-of-Care (POC) creatinine tests might be able to solve this time issue. The tests are easy to use and require a sample of capillary blood, which is less burdensome than the collection of a venous or arterial blood sample. The result is given between 30 seconds and 8.5 minutes later (depending on the device), vs. 1 to 2 hours for laboratory assays [10]. Treatment and care decisions can therefore be taken more rapidly [11]. However, few studies have assessed the ability of POC capillary blood creatinine tests to screen for kidney failure. Hence, the objective of the present study was to evaluate the ability of a POC capillary blood creatinine test to diagnose kidney failure, versus a conventional lab-based plasma creatinine assay in cardiology and nephrology outpatients.

The Ccap was measured with a POC test (Stat Sensor X-press, Nova Biomedical Corporation, Waltham, MA, USA) used routinely in the outpatient unit. After the patient had fasted overnight, a nurse collected a drop of capillary blood from the finger, placed it on the device’s test strip, and inserted the strip into the reader. The result (expressed in μmol/l) was given 25 seconds later. The assay method is based on the transformation of creatinine into hydrogen peroxide, as catalysed by three enzymes in the following reactions: 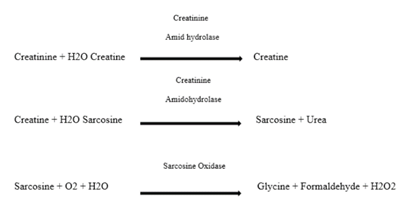 The hydrogen peroxide was then detected electrochemically; the redox reaction generates a current that is directly proportional to the creatinine concentration in the sample [12]. Although there are no analytical standards for POC tests, the National Kidney Disease Education Program’s Laboratory Working Group has stated that the measurement imprecision should be less than 8% (relative to calibration with isotope dilution mass spectroscopy (IDMS)) and the bias should be less than <5% for a Cpl above 88.4 µmol/L [13]. The device used in the present study met these criteria.  The eGFRcap was estimated from the Ccap, using the Chronic Kidney Disease–Epidemiology Collaboration (CKD-EPI) equation [14]. In parallel, the Cpl was measured in a two-point, kinetic enzyme assay (VITROS® CREA, Ortho Clinical Diagnostics, Raritan, NJ, USA that had been calibrated with IDMS. The fasted patient’s blood sample was collected by venepuncture of the arm with a 22 gauge needle and sent to the hospital’s central laboratory. The laboratory estimated the eGFRpl from the plasma creatinine level, using the CKD-EPI equation.

The thresholds for kidney failure were a creatinine level of 110 µmol/l for men and 96 µmol/l for women, and an eGFR below 60 ml/min/1.73m2 , according to the CKD-EPI equation. Quantitative variables were expressed as the mean ± standard deviation (SD), and qualitative variables were expressed as the frequency (percentage).  The degree of correlation between the capillary blood measurements (Ccap and eGFRcap) and the plasma measurements (Cpl and eGFRpl) was assessed by calculation of Pearson’s correlation coefficient (r). The level of agreement between the capillary and plasma measurements was evaluated by calculation of the intraclass correlation coefficient (ICC) and graphically in a Bland-Altman plot.

The performance indicators (Sensitivity (Se) and Specificity (Sp)) for the diagnosis of kidney failure on the basis of the capillary blood measurements (Ccap and eGFR cap) with the Stat Sensor X-press versus the plasma measurements (Cpl and eGFRpl) were calculated, and a receiver operating characteristic ROC curve was used to determine the eGFRcap threshold for a diagnosis of kidney failure. All statistical analyses were performed with R Core Team (version 3.2.3. 2013). R a language and environment for Statistical computing. R Foundation for Statistical Computing, Vienn, Austria. URL http: //www.R-project.org.

3.1. Characteristics of the study population

Table 2: Kidney-related characteristics of the study population (80 men and 33 women).

3.2. Correlation and level of agreement between capillary and plasma creatinine measurements 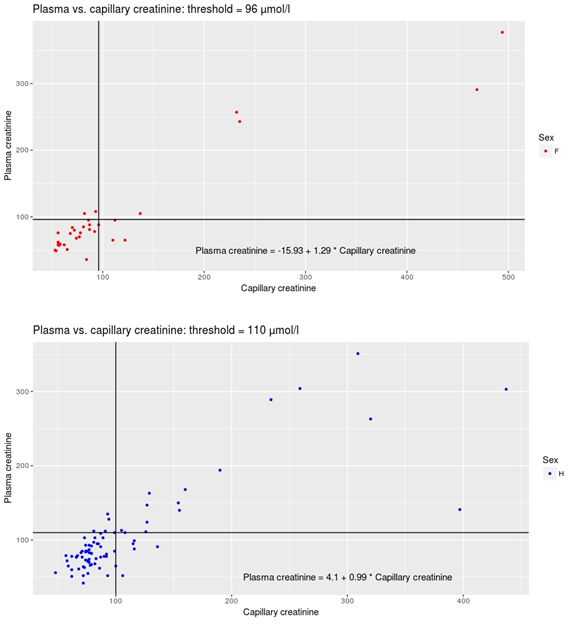 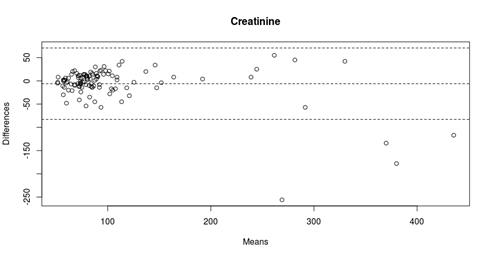 Figure 2: Level of agreement between the Ccap and Cpl measurements (Bland-Altman plot). The dotted lines correspond to the mean [95%CI] for the difference between Ccap and Cpl.

3.3. Correlation and level of agreement between capillary and plasma eGFR values 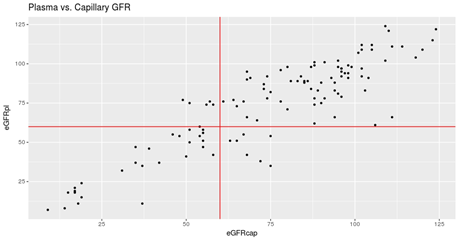 Figure 3: Correlation between eGFRcap and eGFRpl (in ml/min/1.73m2). The vertical and horizontal red lines correspond to the threshold for the definition of kidney failure in each of the estimations (i.e. 60 ml/min/1.73m2). 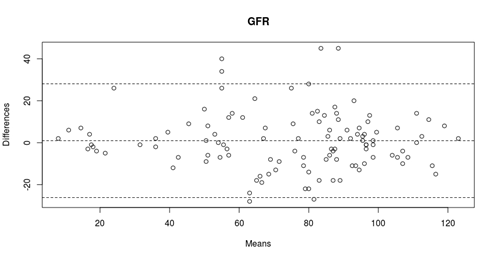 The Stat Sensor X-press POC capillary blood creatinine test can be easily used to diagnose kidney failure at the patient’s bedside prior to an examination involving an injection of iodinated contrast agent. The diagnostic sensitivity and specificity were 70-78% and 91-93%, respectively for women and men. Our study population was representative of patients at a high risk of developing CIN because they were elderly and had cardiovascular risk factors. The median age was 67, and a third of the patients were over 75. The performance of capillary creatinine measurements has been evaluated in several studies, the main results of which are summarized in Table 3. An Australian study evaluated the performance of the Nova StatSensor as a screening tool for chronic kidney failure in 100 individuals (63 patients with kidney failure and 37 healthy volunteers), in whom Ccap ranged from 46 to 962 µmol/l. The level of agreement between Ccap and Cpl was lower at higher concentrations. Hence, 18% of the creatinine concentration below 150 µmol/l differed by more than 20 µmol/l from the lab value, whereas the proportion for concentrations above 150 µmo/l was 62% [15]. The measurement imprecision for plasma creatinine values below 150 µmol/l was 8.9%.

The Nova StatSensor’s analytical performances have also been evaluated in a Canadian study (Table 3) [16]. The coefficient of variation for Ccap ranged from 4.5% to 9.1% for values between 93 and 863 µmol/l. The capillary and plasma measurements were closely correlated (R2=0.9328); again, however, there was negative bias (-30%) at higher creatinine values. The SD of the estimation was 20 µmol/l for Cpl values between 100 and 200 µmol/l. Our results are in line with these studies, i.e. a close correlation between Ccap and Cpl but notable bias at higher values of Cpl. However, the patients in whom notable bias was identified all had a Ccap value that enabled an unambiguous diagnosis of kidney failure and thus the adoption of the measures to prevent CIN. The significant bias in patients with late-stage kidney failure might be due (at least in part) to analytical interference by high blood concentrations of urea. In fact, urea is an intermediate product of the enzyme reaction used in the POC test device and inhibits the hydrolysis of creatinine into sarcosine and urea.

Table 3: Studies having evaluated the performance criteria of the Stat Sensor X-press.

In patients under the age of 75, the ability of Ccap and eGFRcap to diagnosing kidney failure prior to the performance of diagnostic and/or therapeutic procedures involving an iodinated contrast agent appears to be acceptable. In patients aged 75 and over, the diagnostic performance of Ccap or eGFRcap appears to be less good. However, this point should be confirmed in additional studies of a larger number of elderly participants; our sample size in this age class was low.

Our study confirmed the value of a POC capillary blood creatinine test for diagnosing (at least in patients under the age of 75) kidney failure prior to the injection of iodinated contrast agent in an emergency setting – i.e. when the turnaround time for a lab assay is too long. The rapid, simple, reliable identification of patients with impaired renal function may have a significant impact in daily practice by enabling the implementation of preventive measures and thus limiting the risk of CIN. POC capillary blood creatinine test for is promising because it is an easy-to-use, accurate tool that gives quick results. Further studies in elderly populations are warranted because the false positive rate in this age class is still too high.

Ethical approval and consent to participate

All procedures performed in studies involving human participants were in accordance with the ethical standards of the institutional and/or national research committee and with the 1964 Helsinki declaration and its later amendments or comparable ethical standards. This study has obtained IRB approval from Commision National Informatique&Liberté (CNIL), n°2217918, and the need for informed consent was waived.

For this type of study consent for publication is not required.

The datasets used and/or analysed during the current study are available from the corresponding author on reasonable request.

The authors declare that they have no competiting of interests.

This study was not supported by any funding

EV, ZAM, NM and OD designed the present project. AB made the statistical analyses. EV, ME, ZAM analyzed the data. EV, ME, MH contributed to the interpretation of the results. PG, EV, ME and MH wrote the first draft of the article. All the authors provided critical feedback, helped shape the research, analysis and the final draft of the manuscript, and approved the version to be published; EV was the principal investigator.