Methods: The charts of children who underwent surgery for developmental Cataract using clear corneal tunnel incision at 10’O clock and 2’O clock position were retrospectively reviewed. All the sutures from cornea were removed after 1 month of surgery. Refraction was done at 1 month, 3months 6 months and 1 year interval. Statistical analysis was done by SPSS version 16.

Conclusion: Clear corneal incision at 10’O clock and 2’O clock did not significantly influence preoperative existing astigmatism. There was no significant change in astigmatism after 6 months & 1 year of surgery.

Humans are typically born with a wide variation of defocus. During the first year of postnatal development, as normal emmetropization proceeds, axial length increases significantly whereas both the cornea and the crystalline lens lose its powers by flattening. The majority of axial length elongation takes place in the first three to 6 months of life and a gradual declining rate of growth over the next two years [4] and by three years the adult eye size is obtained [5].  After the age of three, there are still increases in axial length and the anterior chamber depth, with a significant reduction in the crystalline lens power, but there is limited change in the corneal power [6, 7].

In adults, corneal astigmatism is a well reported finding after cataract surgery. The amounts of astigmatism controlled by various factors, such as the type and location of the surgical incision, the amount of scleral cauterization performed, the suturing material and suture placement, use of steroid postoperatively [11-14]. The preoperative existing astigmatism also influences the postoperative refractive error of the child.

These study approaches to find out the astigmatic changes after Developmental Cataract Surgery with Intraocular Lens Implantation using corneal tunnel incision in children.

This retrospective review was conducted in 20 children who were previously diagnosed as developmental cataract and surgeries were performed in Chittagong Eye infirmary & training complex (CEITC), Chattogram between June 2019 to June 2020. Data were included on age, gender, time interval of surgeries between two eyes, preoperative Keratometry reading and post-operative astigmatism. Exclusion criteria were associated ocular anomalies, systemic and mental disorders, children below 3years and follow up less than 1 year. All surgeries were performed by a single pediatric ophthalmologist and children were followed up according to a defined protocol.

The preoperative examination included Visual acuity, slit lamp bio microscopy, direct and indirect ophthalmoscopy after full dilatation and B-scan ultrasonography. Intraocular lens (IOL) power calculations were made by using the SRK-II formula on the basis of axial length (A scan) and keratometric readings. IOL power was adjusted according to Dahans formula.

All the patients underwent cataract surgeries under General Anesthesia (GA) with spontaneous ventilation. Corneal tunnels were done at 10’O clock and 2’O clock by MVR blade. Adrenaline was injected into anterior chamber to dilate the pupil. Trypan blue was used to stain the anterior capsule of lens. An irrigating cystitome was inserted into the anterior chamber to create continuous curvilinear capsulorrhexis (CCC).Aspiration of lens was accomplished by using an automated I/A hand piece with Optikon 2000 S.P.A system (Model-PULSAR-2). After in bag implantation of soft foldable hydrophobic acrylic lenses (Alcon, MBI), primary posterior Capsulectomy (Vitrectorrhexis) and anterior vitrectomy were done in all cases by automated vitrectomy machine. Corneal tunnel were closed by 10-0 nylon. All patients received a sub-conjunctival injection of Gentamicine (5mg) and dexamethasone (2mg).The eye remain padded until the 1st post-operative examination.

Children were discharged from the hospital after one day of surgery and were reviewed after one week, one month, three months and at six months of interval. Atropine and antibiotics eye drops were continued up to one month. Steroid eye drop was reduced slowly over the following 8 weeks. All the sutures from cornea were removed after 1 month of surgery.

VA was measured by CSM method, crowding Kay Picture test (KPT), Lea symbol and Snellen charts. Streak retinoscopy was done in every case. The best corrected visual acuity was recorded according to subjective refraction. Refraction and spectacles prescription were given at 4 weeks after removal of corneal sutures. Part time occlusion (4 to 6 hours) and active vision therapy were given for amblyopic eyes.

SPSS version 16 was used for analysis. Descriptive analysis and central tendency were used for analysis. The Friedman (k dependent) test and Wilcoxon signed test were used to compare the outcome variables at the different postoperative periods. A value of P <0.05 was defined as statistically significant. 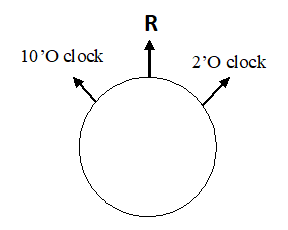 Figure 1: Sutures locations 10’O clock and 2’O clock produce force vectors with resultant R (900 positions). Thus, though steepest axis may pass through 900 positions, this is not the location of the suture.

In this study, we evaluated the change in postoperative refractive astigmatism in pediatric patients after cataract extraction with IOL implantation using temporal and nasal clear corneal incision closed with 10-0 nylon suture.

The findings of postoperative astigmatism are important, especially in children, because of its adverse effect on vision development and the risk of amblyopia. In adults, a few months of delay in correcting the refractive error does not affect the final visual acuity, whereas in children, the optical refraction must be precisely corrected as soon as possible.

Limitations include smaller sample size and difficulty in actual quantification of visual acuity in children.

We would like to express our gratitude to all the staffs of Pediatric and Low vision departments of Chittagong Eye infirmary & training complex (CEITC) for their support during data collection.  We also thankful to those guardians of children who maintain regular postoperative follow up and support us to make this study successful.

The authors declare that there are no conflicts of interest regarding the publication of this study.