Prenatal detection of membranous ventricular septal aneurysm requires clinical, morphological and functional evaluation, as the spectrum of a congenital ventricular out-pouching is vast and complex. Early pediatric cardiological presentation is needed, since clinical course during first year is variable.

Congenital membranous ventricular septal aneurysm (VSA) is a rare cardiac malformation that counts for less than 0.3 % of all congenital heart diseases with an equal distribution between the sexes [1,2]. Morphologically it is characterized by an abnormal localized protrusion or “out-pouching” of the membranous part of the ventricular septum with or without a paradoxical systolic expansion that nearly always stays intracardiac [3,4]. Based on fetal echocardiography distinguishment of the different conditions causing a membranous ventricular septal protrusion is often challenging, in particular in the setting of various clinical presentations and prenatal imaging [3,5,6]. During fetal life, hemodynamic appearance remain asymptomatic and diagnosis is more likely to be an incidental finding [7–9]. However, as congenital aneurysms of the membranous part of the ventricular septum have been reported to be associated with other cardiac anomalies, such as outflow tract obstructions, coarctation of the aorta, or even with chromosomal abnormalities or genetic syndromes, hemodynamic disturbance may occur in the postnatal period [9–12]. We describe the first case of a prenatal detection of a congenital membranous VSA bulging from the left ventricle towards the right atrium, associated with a tricuspid atresia with concordant ventriculo-arterial connection and a ventricular septal defect. Right atrium was compromised by unique cystic appearance of the membranous VSA.

A 45-year-old woman, gravida 3 para 2, was referred to our department at 23 + 4 weeks of gestation because of suspected cardiac anomaly. Findings at that time of the detailed fetal echocardiography included an absent right atrioventricular connection with a thick echogenic and immobile tricuspid valve. The interatrial communication appeared large, with a normal flap of the foramen ovale into the left atrium. Ventricular morphology was mainly defined by a dominant left ventricle (LV) and a rudimentary right ventricle (RV) with a large unrestrictive ventricular septal defect (VSD) (4.7 mm). In the five chamber-, short-axis, and three-vessel-trachea view, the ventriculo-arterial connection was seen to be concordant. Diameter of the pulmonary trunc was slightly smaller (3.3 mm, normal: 3.43 – 5.59 mm) than the size of the aorta (Ao) (4.3 mm, normal: 3,07 – 5,01)[13]. Color flow imaging confirmed the diagnosis of tricuspid atresia with concordant ventriculo-arterial connection by demonstrating the lack of a blood flow across the tricuspid valve and a patent normal-sized left atrioventricular (mitral) valve without regurgitation. Karyotype testing with microarray was offered to the parents but declined. Follow-up evaluations were performed every two weeks. Although at 35+2 wks a new unclear cystic structure measuring 11 x 12 mm was recognized in the right atrium, retrospective video analysis revealed its presence already at 23+4 wks (Figure 1). 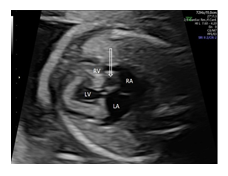 Figure 1: Ultrasound examination at 23+4 weeks of gestation already demonstrating the membranous VSA (arrow) in connection to the left ventricle (LV) and bulging towards to the right atrium (RA).

On detailed examination, cystic structure was located near the crux cordis in relation to the perimembranous part of the ventricular septum and appeared to have a thin wall and a narrow-mouthed direct communication with the left ventricle protruding to the right atrium (Figure 2A). During cardiac cycle, cystic structure changed in size with paradoxical systolic expansion and diastolic run-off (Figure 2B).

Figure 2: Ultrasound examination at 35+2 weeks of gestation demonstrating the membranous VSA (arrow) in the appearance of a cystic structure bulging towards the right atrium during systole (A) and reducing its size during diastole (B).

Color flow imaging showed systolic filling suspected to originate from a dilated right posterior aortic sinus (sinus of Valsalva) and diastolic drainage into the left ventricle (Figure 3A and 3B), with the cystic structure bulging into the right atrium impressing as a “cockade sign” (Figure 4A).

Figure 3: At 35+2 wks, color flow mapping showed systolic filling of the cystic structure bulging into the right atrium apparently from the ascending aorta (A). In diastole, emptying of the aneurysm into the left ventricle is seen parallel to the left ventricular outflow tract (B).

Therefore, diagnosis of a small aorto-left ventricular tunnel with a slightly dilated sinus of Valsalva was made. Cardiac function remained stable and elective caesarean section was performed at 39 +1 wks because of previous caesarean deliveries. A 2,960 g female fetus with Apgar scores of 8, 9, and 9 at 1, 5, and 10 minutes, respectively, was delivered. Postnatal echocardiography confirmed prenatal diagnosis of tricuspid atresia with concordant ventriculo-arterial connection, non-restrictive ventricular septal defect and pulmonary stenosis, but not the suspected aorto-left ventricular tunnel. The prenatally discovered undefined cystic structure was diagnosed as a membranous ventricular septal aneurysm of 14 mm diameter with its origin from the crux cordis protruding into the right atrium. On color Doppler flow from the LV with a paradoxical systolic expansion and complete diastolic run off into the LV was seen. The right ventricle was as suspected hypoplastic and the pulmonary artery was small with a dysplastic, bicuspid valve. Further, an unrestrictive large secundum atrial septal defect was noticed. During neonatal period, cardiac function did not deteriorate and the size and severity of the cardiac lesions remained stable. The child is now two months old.

We describe the first case of a prenatal detection of a large membranous VSA of the left ventricle completely protruding into the right atrium in association with a tricuspid atresia (TA) with concordant ventriculo-arterial connection and a ventricular septal defect. Membranous VSA remained stable during postnatal period and neonatal prognosis was mainly determined by the main cardiac abnormality. Presence of the membranous VSA seemed to be of benign character although associated with a complex congenital heart malformation. In 2004, Espinoza et al. published the first two cases of a prenatal detection of a redundant membranous VSA protruding only into the ventricles, with the earliest diagnosis at 23 weeks of gestation [7]. In one case fetal echocardiography revealed an association to an absent pulmonary valve syndrome and chromosomal aberration (46, XY, del(5)(q22.q31.2)) was diagnosed by amniocentesis. In the other case, the absence of an AV valve offsetting was suspected, but denied during postnatal course. This misdiagnosis of an atrioventricular septal defect in the presence of the membranous VSA was also reported by Ivanitskaya et al. [8]. She reported on a membranous VSA at 38 wks with a ventricular out-pouching into the right ventricle. Membranous VSA decreased in size (5 mm to 3 mm) and no intervention was needed. At least, Weichert et al. described an association with a Smith-Lemli-Opitz syndrome [9]. Initial reasons for referral were dysrhythmia and cardiomegaly at 34 weeks of gestation with a prenatal detection of an additional VSD. Membranous VSA was protruding into the right ventricle. Postnatal evaluations showed additionally a tricuspid valve deformation and the VSA bulging towards the right outflow tract during systole. At an age of two months, a failure in left ventricular systolic function with a paradoxical right-to-left shunt via an additionally large VSD occurred and leaflets of the tricuspid valve were delaminated from the septum. In review, prenatal detection of a membranous VSA appears to affect the ventricles without an involvement of one of the atrium most often. However, a redundant VSA might be described, as fetal pressure gradient appears to be very similar in utero [7,14]. In the first case described by Espinoza et al., the redundant portion of the membranous septum bulged towards the left ventricle during early systole and towards the right ventricle in the late systole [7]. Albeit it is rarely an isolated phenomenon, ventricular pressure gradient can change over time and define fetal heart side of the bulge [15]. Screening for additional cardiac malformations is therefore important and should focus on a systematic evaluation of the ventricular septum and the atrioventricular valves, due to their related embryological origin [16,17]. Aneurysms of this part of the interventricular septum have been proposed to be secondary to an abnormal fusion of the endocardial cushions and may be seen as a mechanism of a partial or complete closure of a ventricular septum defect, explaining their frequent occurrence as suspected in all four published cases [7–9,18]. Moreover the missing of an atrioventricular valve offsetting with a linear insertion of the valves might also be associated with these myocardial abnormalities and must be taken into account, as if isolated detected, postnatal course might be completely unremarkable [7,8,19]. Nevertheless as demonstrated in our case, for the first time the unique cystic appearance protruding completely into the right atrium led to misdiagnosis. Accurate prenatal evaluation of clinical characteristics including morphological and functional evaluation of the ventricular out-pouching might have guided differential diagnosis. Therefore if prenatally suspected initial detailed fetal echocardiography should be performed. The four-chamber view, obtained from the apical view, should be used for evaluating shunt physiology, demonstrating its contractility or detection of wall abnormalities, whereas five-chamber view must be performed for evaluating the continuity of the ventricular septum. Typical findings of a membranous VSA include a thin aneurysmatic wall, showing akinetic, dyskinetic, asynchronous contraction, or even paradoxical expansion during systole, with a wide communicating neck to the internal often left ventricular cavity, although as in our case a narrow connetion might also be present. This may allow differentiation from a congenital ventricular diverticulum, being mostly defined by a muscular narrow neck connection often to the apex of the right ventricle, in similar layer as the ventricular wall with a synchronous contraction [20,21]. Further, if the membranous out-pouching is located between both ventricles without an involvement of one of the atrium, other differential diagnosis as: a double-chambered ventricle with a thick walled membrane and a typically bidirectional blood flow between the chambered ventricle, myocardial crypt due to a congenital hypertrophic cardiomyopathy or an atrioventricular valve dysplasia, should be included [22–24]. Conversely, if the out-pouching involves one of the atria, appearance may differ completely and a “cystic structure” might be observed, as in our case. Differential diagnosis should include an atrioventricular septal defect/- aneurysm, foramen ovale flap or dilated coronary sinus, in which a persistent left superior vena cava in the four-chamber view or an anomalous pulmonary venous connection might further guide diagnosis [25,26]. Other, rare but possible pitfalls to consider are a pseudoaneurysm with a possible complete filled echogenic appearance if thrombotic, ruptured sinus of Valsalva aneurysm, an aortic valve insufficiency, a right coronary-to-left ventricle fistula with dilated aortic sinus, or an aorto-left ventricular tunnel, which should be considered in the presence of left ventricular hypertrophy, dilatation of the aortic sinus with a more turbulent and higher velocity blood flow from the aortic sinus into the left ventricle [27–29].

The exact nature of a membranous VSA in the appearance of ventricular septal bulging remains difficult in most instances, as various criteria adopted do not include all congenital ventricular out-pouchings sufficiently and definitions are used interchangeably. Further clinical presentation may differ and morphological appearance be untypical as represented in our case, the first prenatally visualized membranous VS bulking towards the right atrium with to-and fro blood flow from the left ventricle. Fetuses affected might be associated with further cardiac malformation or even syndromes and screening for possible complications related to the VSA must be ruled out, given the variability in the clinical course during first year [9]. Nevertheless further investigations are needed to precise differential diagnosis, evaluate possible prognostic parameters and to get more knowledge about the pathophysiology of this disease.

No acknowledgements to be mentioned. All authors declare that they received no funding for this study.

There are no conflicts of interest to be declared.

BF, AG, MBES and UG managed the patient. AW, AG and UG performed the analysis. AW and UG created the figures. All the authors contributed in writing and editing of the manuscript.