Background: Hepatitis B virus (HBV) infection is one of the most common public health issues worldwide that requires a critical consideration. Knowing the prevalence of HBV infection in a geographical area aids in ascertaining the extent of the fatal infection. Hepatitis B surface antigen (HBsAg) positivity is a strong indicator of true HBV infection rate in the community. The current study aims to estimate the prevalence of HBsAg in teaching hospital-based population. Large number of patients from diverse backdrop visit our institution, and hence assist in obtaining a precise representation of the viral prevalence in the community.

Methods: A one step rapid immunochromatographic method for detection of HBsAg was performed to diagnose HBV infection in 11,792 serum samples tested over a period of two years were included in this study.

Conclusion: The study helps to know the magnitude of viral transmissible infections in North Indian population. In our study the most commonly affected population belonged to the second and third decade. This raises an alarm for more precaution as the presentation is seen in young age group. Rigorous and effective immunization programs need to be implemented and awareness-based campaigns might help in curbing the viral infectivity.

They say getting diagnosed earlier equals to staying healthy longer. Hepatitis infection is considered more infectious than HIV infection. Up to 75 percent of the cases goes undiagnosed. Educating the common man about the risk factors and health hazards caused by this virus can help us decrease the prevalence of this disease. Dr Baruch Bloomberg in the year 1976 received a Nobel prize for discovering the hepatitis B virus. He also developed a diagnostic test and a vaccine for it.

Viral Hepatitis is causing a major global health peril in the contemporary world. It causes inflammation in the liver. It can present as both acute and chronic forms. The viruses which causes hepatitis are HAV, HBV, HCV, HDV and HEV. Among these HAV and HEV are water borne viruses whereas HBV, HCV and HDV are blood borne viruses.

The number of people infected are over 20 million every year with around 350-400 million chronic carriers of hepatitis B virus [1]. Hepatitis B infection is the tenth most leading cause of death globally, accounting for more than 1.2 million deaths annually [2]. The hepatitis B carriers may differ from region to region and is found to be around 4.7% in India [3,4]. The hepatitis B surface antigen (HBsAg) in serum is indicative of active HBV infection either acute or chronic [5]. It is the first biomarker to be identified in the blood but frequently it goes unidentified. Hepatitis B surface antigen (HBsAg) appears 1-7 weeks before biochemical markers of liver disease become evident and remains in almost half of them even after 3 weeks after the onset of disease [6]. The patients generally do not get completely rid from the virus and become carriers leading to chronic infection. It is the cause of 30% cases of cirrhosis and 60-80% of all primary cancers in the liver [6].

Prevalence of HBV infection varies greatly in different parts of the world. According to World Health Organization (WHO), HBV prevalence can be classified into high, intermediate and low risk areas. India falls in the intermediate range with an estimated 1,00,000 deaths per year [6].

The virus is usually transmitted through contact with infected blood or body fluids. Only tiny amount of blood is needed to transmit because it is very infectious. It can be caused by transfusion of blood and its products, dialysis, pricks by contaminated needles, accidental inoculation of infected blood during surgical and dental procedures, immunization, tattooing, ear/nose pricking etc., perinatal transmission from infected mother to child and sexual transmission [7].

Effective strategies for reducing incidence of chronic infections include screening combined with post exposure prophylaxis consisting of HBV vaccination immediately after detecting HBsAg positivity. But still the prevalence of Hepatitis is increasing in India and globally causing major health hazard. This study therefore aims to detect the current viral load of hepatitis in north Indian population and also to identify the risk factors associated with transmission and help its control and prevention.

A retrospective analysis of all the cases visiting the hematology division of Department of Oral and Maxillofacial Pathology, Faculty of Dental Sciences, King George’s Medical University, Lucknow from January 2018 to December 2019 was done. Any patient who undergoes any invasive dental procedure undergoes a routine blood investigation which also includes tests for viral markers. The test was done by rapid card test. A venous blood sample of 5 ml was collected from patients with standard precautions. Universal (standard) safety precautions were observed during collection and handling of the specimen [8]. The blood was allowed to clot for 45 minutes at room temperature and the serum was separated after centrifugation. The serum was then subjected to one step rapid immunochromatographic assay (ICA) kit for detection of HBsAg following the manufacturer’s instructions (ASPEN). The kit has sensitivity of 99.8% & specificity >99%. The following variables were recorded: positivity, gender and age. The test was repeated in duplicates, and the results were reconfirmed in case of reactive positive result. The data was analyzed, and graphs were formulated respectively. 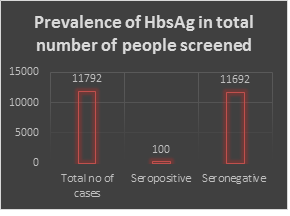 Table 2: Seropositivity for HbsAg according to Gender 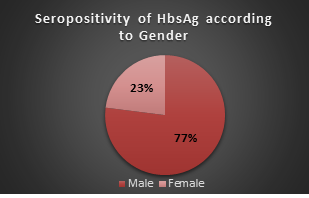 Graph 2: Seropositivity for HbsAg according to Gender

Table 3: Seropositivity of HbsAg According to Age 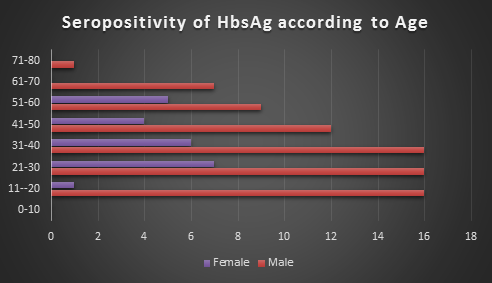 Graph 3: Seropositivity of HbsAg According to Age

HBV is the second most common cause of acute viral hepatitis after HEV in India. With a 3.7% point prevalence, that is, over 40 million HBV carriers, India is considered to have an intermediate level of HBV endemicity. According to NCDC newsletter, 2014, every year, one million Indians are at risk for HBV and about 100,000 deaths are reported from HBV infection [10]. It is said that more than 50% of the liver cancer diagnosed is due to chronic Hepatitis B infection [37]. It is a dangerous, life threatening infection and should not be taken lightly.

Certain group of people are more vulnerable to Hepatitis B than the others. These group of people fall under the high-risk category and should be vaccinated at the earliest. The risk factors include people who frequently require blood or blood products, dialysis patients and recipients of solid organ transplantations, people in prisons, people who inject drugs, household and sexual contacts of people with chronic HBV infection, people with multiple sexual partners, healthcare workers and others who may be exposed to blood and blood products through their work and travelers who have not completed their HBV series, who should be offered the vaccine before leaving for endemic areas [11].

It is lowest in countries or areas with high standard of living like effective vaccination, improved sanitation and safe transfusion measures (e.g. Australia, North America, North Europe) and highest in countries or areas with low socioeconomic levels (e.g. China, South East Asia, South America) [23]. India falls under the category of 2% making it an infection of low-grade prevalence [24]. 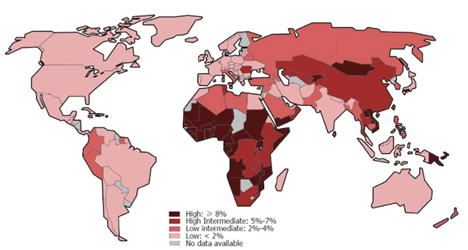 Figure: Distribution of prevalence of HbsAg according to geographic location [24].

In our study, there was an increase in the seroprevalence rate among the male population (77%) as compared to that in female (23%), as shown in Table 2, Graph 2. The gender distribution was seen in accordance with Vazhavandal et al. [23], Kanodia et al. [16], Tripathi P C et al. [25] and Khatoon et al [17]. Higher infection rate in men could be due to their frequent exposure to risk factors such as injecting drug abuse, having multiple sexual partners, unprotected sexual activities, tattooing, etc [26]. Females are thought to clear HBV more swiftly and proficiently.

The lowest prevalence was seen in children and old age group. The decline in seroprevalence of HBsAg in children is ascribed to the effect of universal immunization programme [16]. The reason attributed to lesser prevalence in old age group could be due to slighter societal interaction [28].

The findings in our study was based on rapid card test which can sometimes show false results. More specific tests like radioimmunoassay antigen test or enzyme linked immunosorbent assay should be used for confirmatory results.

We saw a hepatitis B prevalence of 0.85% in apparently healthy individuals. This does not mean that the mortality caused due to hepatitis can be ignored. It indeed remains a fatal infection. Proper immunization and preventive strategies should be applied in our daily clinical practice to reduce its prevalence. These include increasing awareness about the ill-effects of HBV in our community through health education, effective and newer vaccines for HBV, active screening of high-risk groups, provision of safe blood and blood products, awareness about using unsafe sexual practices and unsafe injection practices.

The Indian government needs to initiate new effective programs for the prevention and control for HBV infection. Also, funds should be allocated to community and public health centers for execution and implementation of new schemes. Further screening tests with larger sample size should be carried out to identify and curtail the prevalence of hepatitis B infection in a densely populated country like India.