Diabetes Mellitus is a metabolic disorder characterized by hyperglycemia followed by polyurea, polyphagia and polydypsia with vascular complications. The diabetes mellitus is broadly categorized in four types – Diabetes Mellitus Type I, Diabetes mellitus Type II, Gestational Diabetes and disease associated Diabetes Mellitus. Majority of people now a day suffered from diabetes mellitus type II. It is a major health issue that has been reached at alarming level [1]. Today nearly half a billion people are living with diabetes mellitus worldwide. The estimated projection of diabetes mellitus is about 700 million people suffer from diabetes mellitus. Two-thirds of people with diabetes mellitus type II are live in urban areas and three out of four are of working age [2]. Over four million people aged 20–79 years are estimated to die from diabetes-related causes in 2019. The countries with the largest numbers of adults with diabetes aged 20–79 years in 2019 are in China, India and the United States of America, and are anticipated to increase till in 2030. India is home to the second largest number (77 million) of adult population with diabetes worldwide. With 1.2 million deaths in 2019 (14.1% of all-cause mortality), the South East Asia Region has the second highest number of deaths attributable to diabetes in adults 20–79 years among the IDF Regions [3]. Many influences that affect the prevalence of disease throughout a country and identification of those factors is necessary to facilitate change when facing health challenges. Today modern medicine develops so many drugs for management of diabetes mellitus type II. The common drawback of modern medicine is drug resistance because the drugs are used for life long period. To avoid such types of problems with modern medicines the world now a day look towards the herbal medicines which are safe in use for long period of time. The medicinal plants play a pivotal role in the health care of ancient and modern cultures [4]. The utility of medicinal plants in the management of diabetes mellitus type 2 are rising in the developing countries worldwide. There is enhancement in scientific evidences that supports the claim towards the traditional healers. The research on herbal medicines and their natural products have significant importance in demands and use in few decades and increasing the demand of herbal drugs worldwide. The available ancient literatures show that there are more than 400 plant species showing anti-diabetic activity. Although some of the plants have great reputation in Ayurveda, the indigenous Indian system of medicine, many remain to be scientifically established [5]. Streptozotocin (STZ) is an antibiotic derived from species Streptomyces achromogenes and structurally it is a glucosamine derivative of nitrosourea. STZ first reported the diabetogenic activity in rats in 1963. Like alloxan [6], it also causes hyperglycaemia by cytotoxic action on beta cells of the pancreas. The nitrosourea moiety of STZ is responsible for producing beta cell toxicity, while deoxyglucose moiety enhances the transport across the cell membrane. The free radicals generation and alteration in the endogenous scavengers of the free radicals have been reported in STZ diabetogenecity [9]. In comparative to synthetic medicines, Ayurvedic formulations are effective, less side effects, broad range of action and relatively low cost, makes polyherbal formulation as a good choice in management of diabetes type 2 [10]. So many polyherbal formulations are reported in ancient Ayurvedic literatures but due to lack of scientific evidences such formulations are still hidden. Katankateryadi Kwatha is a polyherbal formulation of total five ingredients. The aim of this study is to scientifically prove the Katankateryadi Kwatha as antidiabetic polyherbal formulation for public welfare.

2.4 Preparation of decoction of Katankateryadi Kwatha

Prepared Decoction of Katankateryadi Kwatha and dried powder of decoction was evaluated for their organoleptic properties, microbial contaminations, presence of heavy metals and presence of pesticide residue [18].

The Phytochemical screening of different extracts of crude drugs and Kvatha (decoction) were performed according to the procedure mentioned in Ayurvedic Pharmacopoeia of India (API) [19].

2.9.1 Induction of diabetes and treatment

3.3 Blood glucose level during OGTT in normal and diabetic rats

Blood glucose level at different time intervals in OGTT treated with Katankateryadi Kwatha was significantly reduced after treatment compared to the diabetic control group and all treated groups [Table 1, 2 and Fig. 1,2].

The values represent the mean ± SEM and analyzed by one way ANOVA followed by Dunnett’s test. Values are significantly different at the P < 0.05

Figure 1: Blood glucose level during OGTT in normal rats after treated with Katankateryadi Kwatha and Glibenclamide.

The values mean ± SEM with in the column and analyzed by one way ANOVA followed by Dunnett’s test are significantly different at the P < 0.05, NC= Normal control, DC = Diabetic control, D = Diabetic Group.

Figure 2: OGTT in diabetic rats after treated with Katankateryadi Kwatha and Glibenclamide. 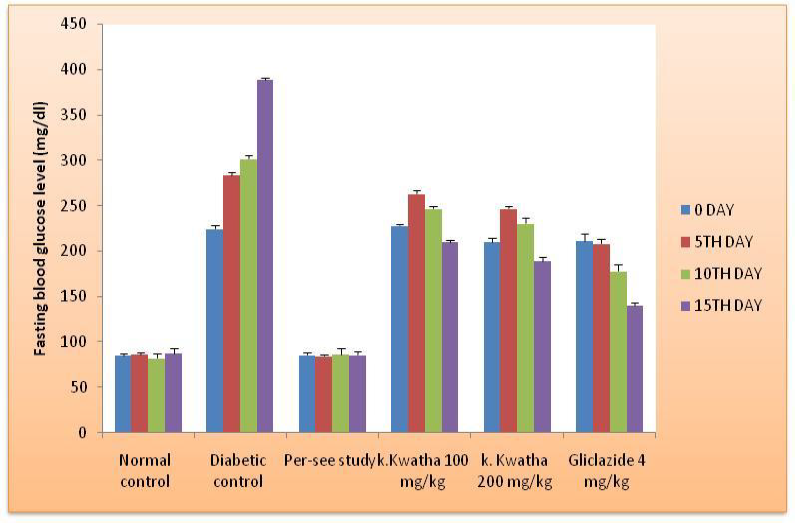 Figure 5: Shows the SGPT and SGOT level in STZ-NAD induced diabetic rats after treatment with Katankateryadi Kwatha and gliclazide

Type 2 diabetes mellitus is a complex, heterogeneous, and polygenic disease characterized by hyperglycemia [32]. There are many factors that contribute to the high blood glucose levels in these type 2 diabetes patients. An important factor is the body’s resistance to insulin, and the second factor is the falling production of insulin by the cells of the pancreas. Lack of insulin plays a primary role in the metabolic derangements linked to diabetes, and hyperglycemia in turn plays a key role in the complications of the diabetes. Several other types of diabetes mellitus are caused by an interaction of genetics and environmental factors [33]. Diabetes type 2 is also refers to as Madhumeha in Ayurveda. Diabetes is associated with vascular and renal dysfunction characterized by hypertension, dyslipidemia, microalbuminuria, macroalbuminuria and glomerular messangial expansion. Diabetes mellitus may present with characteristic symptoms such as polyphagia, polydypsia, polyuria, blurring of vision and weight loss. In its severe forms, keto-acidosis or a non-ketonic hyperosmolar state may develop and lead to stupor, coma and in the absence of effective treatment to death. Diabetes patients are 25 times more prone to blindness, 2 times more prone to heart attacks, 2-6 times more prone to stroke and 17 times more prone to kidney damage as compared to non-diabetics [34]. The characteristic feature of type 2 diabetes mellitus is hyperglycemia that is reported by elevation in fasting plasma glucose [≥7.0 mmol/l (≥126 mg/dL)] and 2-hour postprandial glucose [≥11.1 mmol/l (≥200 mg/dL)] [35].

Diabetes mellitus type 2 is a syndrome of insufficient insulin secretion or insulin resistance or both. However, insulin secretary capacity is not the major determinant in the development of type 2 diabetes, as neither hyperglycemia nor glucose intolerance develops in insulin-resistant patients. Altered insulin secretion caused by either β-cell dysfunction or reduced β-cell mass or both. However, surgical and chemical reductions of β-cell volume induce functional adaptation of the normal β cell to prevent a rise in fasting glucose or reduction in the 1st phase of insulin secretion, suggesting that β-cell dysfunction is closely associated with the pathogenesis and pathophysiology of DM type 2 [36]. Normal dynamics of insulin secretion selective for glucose stimulation, especially the acute phase of the insulin response, is already reduced in the early stage of type 2 diabetes, patients with IGT, and their first-degree relatives.  As the early phase of insulin secretion is determined by the RRP (readily releasable pools), a reduction in its size and/or impairment of signaling for exocytose of the insulin granules from the RRP (readily releasable pools) may well develop in IGT and the early stage of type 2 diabetes. The RRP (readily releasable pools) is completely depleted in completely developed stage of diabetes mellitus type 2 [37]. Type 2 diabetes, or its antecedent impaired glucose tolerance, is often associated with other disorders, particularly central (visceral) obesity, hypertension and dyslipidemia (characterized by elevated low-density lipoprotein (LDL), triglycerides and decreased high density lipoprotein (HDL) [38]. There is no specific recommendation on the percentage of calories that should come from carbohydrate, protein, and fat. The medications for the treatment of type 2 diabetes have the target to increase the insulin secretion (Sulfonylurea) or increase the peripheral utility of glucose or inhibit the metabolism of carbohydrate and their absorption [39]. The primary mechanism of action of the sulfonylurea drugs is to stimulate insulin release from pancreatic B cells. Sulfonylurea are used in patients with type 2 but not type 1 diabetes, since these medications require functioning pancreatic B cells to produce their effect on  blood glucose. The Daruharidra has the Hypoglycemic, anti-cancer, gastro-irritant, anti fatigue; anticoagulant, Antipyretic, local-anesthetic, anti- protozoal, anti-tuberculosis, anti–bacterial, anti-tumor, hypotensive, anti-inflammatory, anti-trachoma, CNS-depressant action also [40].

The previous studies show that insulin is the important hormone that regulates blood glucose homeostasis by stimulating the utilization of glucose by liver, muscle and adipose tissue, with stimulation of anabolic processes of glucose, protein and lipid synthesis. Insulin is initially synthesized in beta cells in the form of pro-insulin. In this form the alpha and beta chains of active insulin are linked by a third polypeptide chain called the connecting peptide, or C-peptide, which are assumed to primarily serve as a facilitator for the formation of active insulin by helping insulin to fold and be cleaved as necessary [47]. STZ-Nicotinamide injection caused diabetes mellitus type 2, which may be due to partial destruction of β cells of the islet of langerhans of the pancreas. Over-production (excessive hepatic glycogenolysis and gluconeogenesis) of glucose and decreased utility of glucose by the tissues are the fundamental basis of hyperglycemia in diabetes mellitus type 2 [48].

This study has revealed that Katankatareyadi Kwatha produced a marked decrease in blood glucose at 200 mg/ kg body weight in normal as well as in diabetic rats after 15 days of treatment protocol. Streptozotocin induces diabetes by free radical generation, which causes destruction of insulin secreting beta cells of the islets of langerhans, resulting in a decrease in endogenous insulin level. The free radical scavenging effect of Nicotinamide reduced the effect of STZ. NAD++ is the principal metabolite of Nicotinamide. NAD++ level in beta-cells in pre-diabetic and diabetic is significantly reduced and destruction of beta-cells may occur via oxidative stress. Increased levels of reactive oxygen species in beta-cells may result in oxidative damage to DNA resulting in DNA strand breaks. The enzyme poly ADP ribose polymerase or PARP is believed to play a role in DNA repair in beta cells and the PARP uses NAD++ as its substrate. In the context of a reduced level of NAD++ result in cellular apoptosis. Nicotinamide is an inhibitor of PARP and reduced the apoptosis. All of these effects of Nicotinamide play some important role in the possible anti-diabetogenic action of Nicotinamide against the STZ. Nicotinamide by the above mechanism minimize the effects of STZ and helps in partial destruction of beta cells leads to development of diabetes mellitus type 2 [49]. In the present study the data obtained clearly indicate that the administration of Katankatareyadi Kwatha lowers the hyperglycemia and increases the C-Peptide level means increases the synthesis and secretion of insulin. On the basis of the current investigation it was noted that the Katankatareyadi Kwathahas the antidiabetic activity and these results provide pharmacological evidence for its folklore claim as an antidiabetic agent.

The Katankateryadi Kwatha a polyherbal formulation reduces the blood glucose level significantly in diabetic rats. Kwatha reduces the enzymatic activity of alpha amylase, alpha glucosidase which are responsible for hyperglycemia. Kwatha also inhibit the glucose absorption from dialysis membrane, hence we can says that Katankateryadi Kwatha can be used as a potent antidiabetic formulation for the management of hyperglycaemia.

A very thankful Banaras Hindu University for providing the facilities for conducting this research and also thankful to all authors for their equal support in research work and paper writing. No grant for publication of this article.

No conflict of interest between the authors