Should We Operate on Thoracic Aortic Aneurysm of 5-5.5cm in Bicuspid Aortic Valve Disease Patients?

Background: This study aims to determine the long-term outcomes and rate of reoperation among BAV patients with aortic diameter of 5-5.5cm who underwent immediate surgical repair versus surveillance.

Methods: A total of 148 BAV patients with aortic aneurysm measuring 5-5.5cm were identified between 1993 to 2019. Patients were categorized into two groups: immediately operated (n=89), versus watched group (n=59) i.e., monitored until either symptomatic, aortic diameter ≥ 5.5 cm or operated at surgeons’ discretion/patient preference.

Conclusions: Our study showed that the rate of reoperation was similar between groups and survival outcomes were acceptable in observed asymptomatic BAV patients without significant family history and with proximal aortic diameter of 5- 5.5cm.

Bicuspid Aortic Valve Disease (BAV) patients with an aneurysmal proximal thoracic aorta have a higher risk of acute aortic dissection compared to TAV patients [1]. Acute type A aortic dissection is a feared complication of thoracic aortic aneurysm because it is associated with a mortality rate of 1-2% per hour after the onset of symptoms, and about 90% deaths within 90 days if left untreated [2]. Hence, the American Association for Thoracic Surgery (AATS) guidelines favor aortic repair when the proximal thoracic aortic aneurysm diameter is ≥ 5.5 cm in patients without significant risk factors [3]. However, data from the international registry of aortic dissection (IRAD) showed that majority of acute dissections occur at a proximal aortic diameter < 5.5cm [4]. There is limited evidence to guide surgeons when to operate on BAV patients with proximal aortic aneurysm. Our study aims to determine the long-term survival outcome and rate of reoperation among BAV patients with proximal thoracic aortic diameter of 5-5.5cm who underwent immediate surgical repair versus surveillance with Computed Tomography (CT) and echocardiogram between 1993-2019 at our institution.

This study was approved by the Institutional Review Board at Michigan Medicine (HUM 001118517; September 26th, 2016) and a waiver of informed consent was obtained.

Data from 1993-2019 was retrieved and collected from the Michigan Medicine Bicuspid Aortic Valve (BAV) Registry. The BAV registry was developed to better characterize patients with bicuspid aortic valve disease by assessing patterns of aortic dilation, potential genetic markers, and the effects of medical intervention in this population. Patients 18 years and older with BAV disease were recruited for the registry. Patients with aortic aneurysms of the root, ascending, or arch measuring between 5-5.5 cm were identified by Transesophageal Echocardiogram (TEE) and Computed Tomography (CT) imaging. Data collection included pre-operative, intra-operative, and peri-operative variables as well as reoperation data. These variables were supplemented with data from the Society of Thoracic Surgery (STS) Michigan Medicine Cardiac Surgery Data Warehouse and retrospective medical record review. Survival data was obtained from the National Death Index Database through December 31st, 2018.

Between 1993-2019 a total of 148 BAV patients were identified as having aortic root, ascending aorta, or aortic arch diameters between 5-5.5 cm. Patients were organized into two groups: those who were operated on immediately for the aortic aneurysm (n=89) and those who were watched (n=59). Determination to observe or operate on patients was made at time of initial surgical consultation. Patients in the immediately operated group were scheduled for surgery at their initial consultation, whereas patients in the watched group were evaluated and followed with CT or echocardiogram imaging until either symptomatic, aortic diameter ≥ 5.5 cm, or operated on at surgeons’ discretion/patient preference. The average time between initial screening and surgery was 79 days for the operated group and 269 days for the watched group. The mean follow-up imaging time in the watched group was five years at our institution. In the watched group, 25 patients had growth of their proximal thoracic aorta diameter exceeding 5.5cm, while another 15 patients became symptomatic due to valvular dysfunction, necessitating surgery. Furthermore, there were 11 patients who underwent aortic repair due to patient preference/surgeon’s discretion. The average aortic diameter for these patients was 50.9mm. Lastly, 8 patients are still currently monitored and have not yet had an operation (Figure 1). Similarly, in the immediately operated group, 38 patients underwent aortic repair due to average aortic size of 52.2mm, 24 patients due to significant valvular dysfunction and another 27 patients were operated on due to surgeons’ discretion/patient preference (average aortic size was 52.3mm). 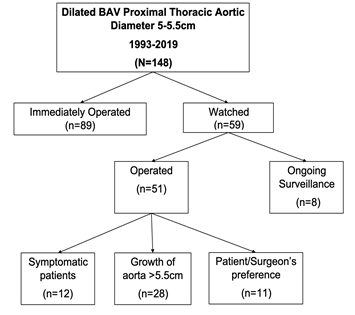 Figure 1: Consort diagram of selection and distribution of study population.

Data are presented as median (interquartile range: 25%, 75%) for continuous data and n (%) for categorial data. Univariate comparisons between the watched and immediately operated groups were performed using Wilcoxon rank-sum tests for continuous data and chi-square tests for categorical data. P<0.05 was considered statistically significant. Cumulative incidence function curves using the Fine and Gray sub-distribution method with death as a competing factor were used to model the incidence of initial operations of the watched group and reoperations for both watched and operated groups over time. The Gray’s test was used to determine statistical significance between the cumulative incidence function curves of the watched and operated groups. Survival was estimated by the Kaplan-Meier method with log-rank testing. Statistical calculations were executed using SAS (SAS Institute, Cary, NC).

6.1. Demographics and preoperative outcomes of the immediately operated group and watched group patients

Compared to the immediately operated group, the watched group had a significantly lower proportion of male patients (76% vs 94%), p=0.001 and patients with severe aortic stenosis (12% vs 33%), p=0.03. Also, patients in the watched group had a smaller body surface area (BSA) when compared to the operated group (2.1 vs 2.2), p=0.02. There was no difference between groups for all other preoperative data including hypertension, family history of aortic dissection, BAV type, aortic stenosis, or aortic insufficiency (Table 1). The initial proximal thoracic aortic mean size was similar between groups at initial consultation for surgical repair: 52.1 mm (interquartile range: 51.8- 52.4) in the watched group and 52.6 mm (interquartile range: 52.2- 53.1) in the operated group, p=0.06 (Table 1). 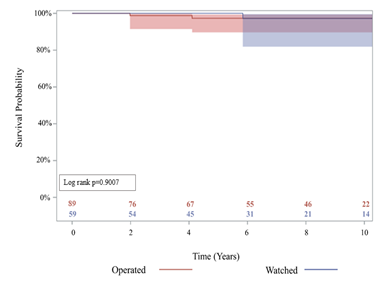 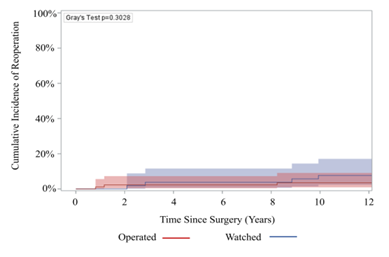 Historically, some surgeons chose a more aggressive surgical approach towards the mildly dilated proximal thoracic aorta in bicuspid aortic valve disease patients because a few genetic and observational studies showed that BAV aortopathy was associated with increased risk of acute thoracic aortic dissection compared to the general population [6,7]. This notion was underscored by data from the international registry of aortic dissection which showed that most thoracic acute dissections occur at a proximal aortic diameter < 5.5cm [4]. However, the American Association for Thoracic Surgery consensus guidelines favor aortic repair when proximal thoracic aortic aneurysm diameter is ≥ 5.5 cm in patients without significant risk factors [3]. This recommendation was based on observational studies that demonstrated an inflection point and a significant risk of aortic complications at thoracic aortic diameter of 6.0cm [8].

In our study, there was no reported incidence of acute thoracic aortic dissection in the watched group over 10 years. However, approximately 19% of patients underwent proximal aortic replacement due to patients’/surgeons’ preference, 42% of patients later had a proximal aortic diameter exceeding 5.5cm and another 25% had valvular dysfunction such as aortic insufficiency and aortic stenosis, necessitating surgical aortic repair. Fewer patients in the watched group underwent proximal aortic replacement compared to the immediately operated group (86% vs 100%) throughout the entire study period and some patients are still being observed. In line with our findings, Paruchuri et.al (2015) showed that compared to patients with Tricuspid Aortic Valve (TAV), there is no significantly increased risk of aortic dissection associated with dilated BAV aortic diameter between 5-5.5cm [8]. Also, though thoracic aortic aneurysms are more common in BAV patients compared to TAV patients, recent benchtop biomechanical data shows higher longitudinal and circumferential tensile strength and collagen stiffness in resected proximal thoracic aortas of BAV patients compared to TAV patients [9,10]. In addition, a recent study show that in an ex vivo setup, BAV proximal aortic aneurysms have greater resistance to aortic dissection compared to TAV aortic aneuryms [11].

Furthermore, our study showed that the 10-year incidence of initial operation in the watched group was 85% but the reoperation rate was low. Clearly, most BAV patients with dilated proximal aorta would require surgery when symptomatic or when aortic diameter exceeds 5.5 cm, however delaying surgery in asymptomatic BAV patients with dilated proximal thoracic aorta of 5-5.5cm is appropriate due to increased risk of surgical morbidity and mortality, especially at low volume hospital centers [12]. Also, though thoracic aorta replacement surgery is safe and favorable long term survival outcome has been documented in literature [13,14,15] perioperative outcomes such as atrial fibrillation, among others, can be mitigated by imaging surveillance of the dilated proximal aorta (5- 5.5cm) in asymptomatic patients. Our study showed that there was lower incidence of atrial fibrillation in the perioperative period (20% vs 38%) in the watched grouped compared to the immediately operated group. Literature shows that postoperative atrial fibrillation is associated with prolonged hospital stay and increased healthcare costs and is an independent predictor of adverse outcomes such as kidney failure, stroke, and hemodynamic compromise after cardiac surgery including thoracic aorta replacement [16,17,18,19].

In addition to the perioperative complications, surgeons should also be aware of other long-term complications. For example, when we replace BAV patients’ proximal aorta with or without aortic valve replacement, we put them at a life-time risk of graft infection, prosthetic valve endocarditis and thromboembolic strokes. In our study, after the initial aortic aneurysm repair, both groups had these complications. Two patients in the watched group had strokes after they had aortic aneurysm repair during follow-up for proximal aortic size > 5.5cm and the other due to surgeon’s preference: the patient had moderate aortic insufficiency and stable aorta diameter size of 5.2cm. Long-term complications due to aortic grafts, valves, or anastomotic dehiscence were not high, but not zero. If patients do not need an aortic replacement, we could observe those patients to avoid the long-term complications of surgery.

This study was a single center retrospective research study, and the sample size was relatively small. However, our study findings support the current American Association of Thoracic Surgery guidelines that favors aortic repair when the proximal thoracic aortic aneurysm diameter exceeds 5.5 cm in patients without significant risk factors. We have been increasing observation instead of operation in those patients and have been enrolling them into our BAV registry. Lastly, it is plausible that patients operated on immediately had some other consideration or risk factor not captured in our registry, that made both the surgeon and patient more inclined to opt for immediate surgery.

In conclusion, our study showed that survival outcomes were acceptable in observed asymptomatic bicuspid aortic valve patients without significant family history and with proximal aortic diameter of 5- 5.5cm. While further studies are needed to reinforce this guideline, our study supported that these patients can be safely monitored with routine imaging studies until they became symptomatic or aortic diameter exceeds 5.5 cm. Though patients could be operated upon if risk of monitoring outweighs benefits based on surgeons’ clinical judgement.

Our sincere gratitude to the entire staff at the University of Michigan Cardiac Surgery Department for their support through this project. Dr. Yang is supported by the NHLBI of NIH K08HL130614, R01HL141891, and R01HL151776, Phil Jenkins and Darlene & Stephen J. Szatmari Funds.