1 Department of Pharmacology, All India Institute of Medical Sciences, Gorakhpur

Background: Cyclic nucleotides (cAMP and cGMP) act as secondary messengers in various cellular processes like signal transduction and inflammation. Sildenafil and tadalafil are phosphodiesterases-5 (PDE-5) inhibitors which prevent the degradation of these cyclic nucleotides and thus play a key role in regulating allergy, inflammation, and smooth muscle relaxation. The present study was conducted to ascertain the anti-allergic potential of Phosphodiesterase-5 inhibitors, sildenafil and tadalafil. Their effects on mast cell degranulation in animal model of bronchial asthma was explored.

Method: An allergic model of bronchial asthma was developed. Wistar rats were first sensitized with 10 mg intraperitoneal (ip) ovalbumin adsorbed to 10 µg of aluminum hydroxide on day 0 and were subsequently divided into six groups (n=6). Animals received the following treatment: sildenafil (1 and 3 mg/kg ip) and tadalafil (1 and 3 mg/kg ip), normal saline (2 ml/kg ip) and prednisolone (5 mg/kg ip) from day 1 to day 14. On day 14 animals were challenged with ovalbumin (1 mg ip). After 24 h (on day 15) of antigen challenge all animals were anaesthetized with halothane for terminal sacrifice. The mesentery was harvested and stained with 0.2% toludine blue. The degree of mast cell degranulation was assessed in different treatment groups.

Airway inflammation contributes to airway hyperresponsiveness (AHR), causes airflow limitation and respiratory symptoms, which are hallmarks of the bronchial asthma [1].

Allergic asthma is a type-1 hypersensitivity defined by IgE antibody-mediated mast cell degranulation where mast cells become activated mainly via IgE-mediated crosslinking of the high affinity receptor for IgE (FceRI) with allergens culminating into release of inflammatory mediators like histamine [2]. Mast cells are the major cellular component of inflammation in allergic asthma and contribute to initiating the acute bronchoconstrictor response, mediated by histamine.

Histamine released from mast cells is a key component of airway obstruction via smooth muscle contraction. It also contributes to increased bronchial secretion, and airway mucosal edema. Histamine causes prolonged bronchoconstriction, increased vascular permeability and acts as a chemo-attractants for other inflammatory cells [3, 4]. Cyclic nucleotides like cGMP and cAMP are integral to intracellular signaling and inflammation.

They are now being considered as therapeutic targets for many inflammatory disorders of the cardiorespiratory system [5]. Phosphodiesterase (PDE) are enzymes that hydrolyze cyclic nucleotides, cAMP/ cGMP to their inactive 5' monophosphates. Elevation of these nucleotides, brought about by PDE inhibitors, leads to inhibition of airway smooth muscle contraction and cellular inflammation.

Eleven isoforms of PDEs are known to mankind of which PDE5 is widely expressed in the airway and it preferentially hydrolyses cGMP [6]. Selective PDE5 inhibitors like sildenafil and tadalafil have shown anti-inflammatory and bronchodilatory effects in various experimental studies [7]. These properties might be related to both, inhibition of secretion of mediators of anaphylaxis and relaxation of lung smooth muscle, two cyclic nucleotide dependent phenomena [8].

A decrease in immunologically mediated histamine release from human lung and passive cutaneous anaphylaxis in rat have also been observed with agents that inhibit cGMP-hydrolysis [9]. Anti-anaphylactic properties of phosphodiesterase inhibitors may also be linked to the increased cGMP. Sildenafil treatment reduced airway hyperreactivity, leukocyte influx and NO generation, possibly by elevation of cGMP in an animal model of bronchial asthma [10]. Tadalafil is more selective for PDE-5 and is more potent than sildenafil. Tadalafil and sildenafil have shown clinical benefits in pulmonary artery hypertension [11]. The anti-inflammatory and anti-oxidative potential of sildenafil and tadalafil has been demonstrated in various animal studies [12,13]. Their role in modifying the allergic inflammatory cascade in bronchial asthma is still unclear.

The present study was undertaken to explore the anti-allergic potential of sildenafil and tadalafil in an animal model. A model of allergic asthma was developed in Wistar rats [14]. The effects of sildenafil and tadalafil on mast cell degranulation in rat mesentery were assessed. Connective tissue like mesentery is a rich source of mast cells. Rat Mesentery provides an excellent preparation to quantify the degree of mast cell degranulation [15].

Wistar rats (220–250 g) of either sex was used in the study. The study protocol was approved by the Institutional animal ethics committee. Animal experiments and procedures were conducted in accordance with the guidelines laid down by the CPCSEA (Committee for the Purpose of Control and Supervision of Experiments on Animals) for the use and care of laboratory animals. The animals were housed in standard laboratory conditions. The animals had free access to standard pellet diet and water.

2.3. Sensitization and Challenge schedule in animals

All animals were challenged with ovalbumin (1 mg ip) in 0.5 ml of isotonic saline on fourteenth day. After 24 h (on day 15) of ovalbumin challenge all animals were anaesthetized with halothane for terminal sacrifice; the abdomen was opened, and mesentery was collected for histopathological examination. Mesentery was fixed and stained with 0.2% toludine blue, to assess the extent of mast cell degranulation in different treatment groups.

Fragments of mesentery were fixed and stained for 15 minutes in a solution containing 50% ethanol, 10% formaldehyde, 5% acetic acid and 0.2% toludine blue. Mesentery fragments were then mounted on a glass slide, care being taken not to fold or stretch the tissue. Mast cell degranulation was assessed by counting the percentage of cells with extruded granules (12 microscopic fields counted; 100 X magnification).

Degranulated mast cells could be rapidly visualized under light microscopy because their metachromatic cytoplasmic granules retain the dye even after being discharged extracellularly. Percentage inhibition of mast cell degranulation (MCD) for each treated group was calculated by following formula: % inhibition of MCD =(1-Number of degranulated cells/total number of mast cells) X 100. 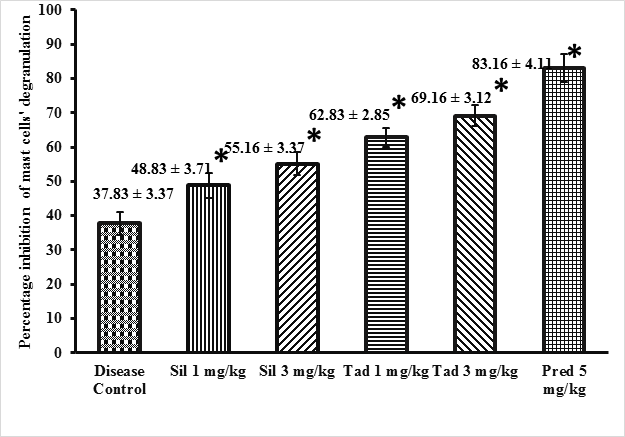 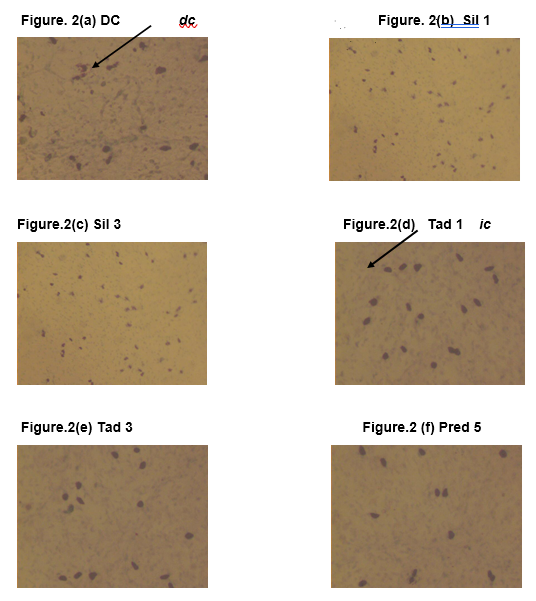 Mast cell activation causes the process of degranulation that results in releasing of mediators, such as histamine and an array of other inflammatory cytokines [18]. Histamine is the most well-characterized and the most potent vasoactive mediator of inflammation released from the mast cell. It is implicated in the acute phase of immediate hypersensitivity [19]. Type-1 hypersensitivity is mediated by histamine which is released as a result of cross-linking of antigens to immunoglobulin E (IgE) bound to FceRI on mast cells.

Selective PDE5 inhibitors such as sildenafil and tadalafil may offer therapeutic benefits in airway diseases, as PDE5 is expressed in high levels in lung [20]. Airway inflammation and reactivity in animal models have shown marked improvements with tadalafil. Also, there was restoration of alveolar growth and pulmonary angiogenesis with the administration of tadalafil [21, 22] In the current study, a statistically significant increase in the percentage inhibition of mast cells’ degranulation was seen with sildenafil and tadalafil (1 mg/kg and 3 mg/kg), the results were dose dependent. Tadalafil caused greater inhibition of mast cells’ degranulation.

Our results are consistent with a study conducted by Mackay GA et al, where the role of cGMP in the functional modulation of mast cells and basophils was investigated, the potential of cGMP to inhibit immunologically induced histamine release from these cells was studied [23]. Exogenous administration of cGMP caused potent inhibition of histamine release from rat peritoneal mast cells.

The bronchodilatory potential of PDE5 inhibitor has been demonstrated in anaesthetized ventilated guineapigs where there was an inhibition of the histamine induced bronchoconstriction. Elevation in the cGMP levels in anaesthetized guinea-pig trachea was also seen [24]. In a guinea pig model of airway hyperresponsiveness tadalafil reduced specific airway resistance after nebulization of histamine, these results agree with ours. Tadalafil led to significant decrease in histamine induced contractile responses in the lung tissue strips [25]. These changes corelated with decrease in the levels of circulating leukocytes and eosinophils.

The lung tissue homogenate also exhibited reductions in the concentrations of interleukin (IL)-4, IL-5, and TNF-a. Tadalafil exhibited beneficial effects in allergic airway inflammation. Sildenafil resulted in diminution of the hyperresponsiveness of the isolated rat tracheal rings in response to carbachol-induced contractions.

Isolated rat tracheal rings were obtained from naive male wistar rats which were first sensitized with intraperitoneal injections of ovalbumin and then challenged by inhalational ovalbumin [26]. Increase in the levels of cGMP, which is the downstream messenger of nitric oxide, is seen with PDE5 inhibitors, thereby leading to the enhancement of NO/cGMP effects.

Nitric oxide, produced by nitric oxide synthase (NOS) stimulates soluble guanylate cyclase (sGC), and subsequently forms cGMP which then activates protein kinase G type I (PKG-I), a serine/threonine kinase. It has also been reported that sGC expression is reduced in the lungs of mice sensitized and challenged with ovalbumin [27]. In a murine model of lipopolysaccharide (LPS)-induced lung injury, sGC inhibition worsened lung inflammation, which could be reversed by a cell-permeable cGMP analogue [28]. Relaxation of the airway smooth muscle is caused by the NO/cGMP/PKG signaling pathway, zaprinast and vardenafil, two selective PDE5 Inhibitors augment this NO-induced relaxation [29, 30]. Experimental studies in rat mast cells have demonstrated that increased cGMP is involved in the inhibition of histamine release by PDE inhibitors [31]. Our results are in agreement with studies showing anti-allergic effects of other PDE5 inhibitors like vardenafil.

Pre-incubation with vardenafil caused significant reductions in compound-48/80-induced histamine release from rat peritoneal mast cells. Immunologic as well as non-immunologic mast-cell-mediated allergic reactions were alleviated in rat peritoneal mast cells which were pre-incubated with vardenafil [32]. Both, sildenafil and tadalafil have caused significant reductions in the levels of inflammatory cytokines like IL-4 and TNF-a in serum and bronchoalveolar lavage fluid of ovalbumin challenged rats [33]. To summarize, the findings of the current study suggest that PDE5 inhibitors sildenafil and tadalafil inhibit mast cells’ degranulation in rat mesentery preparation and hence could possibly have an anti-allergic effect and a therapeutic potential in bronchial asthma.

Further clinical studies are required to investigate the effect of specific PDE5 inhibitors in airway diseases.

This research has been carried out using internal resources of the authors’ institutes.