Investigation of the Distribution and Abundance of Butterfly in the Nature Reserve of Arabuko Sokoke Forest Reserve, Kilifi County, Kenya

Arabuko Sokoke Forest (ASF) is ranked second in Africa and fifty globally in biodiversity richness. It is the largest remnant of what was originally an extensive strip of dry coastal forest that extended from Southern Somalia in the horn of Africa to the Eastern Cape in the south. The forest consists of three vegetation types; the Brachystegia, Cynometra and Mixed forest and provide habitat cover to the many flora and fauna. Extraction of adult butterfly by the local adjacent population for export has been going on over 25 years. The ten (10) current research investigates the distribution and abundance of butterfly’s species along transects within the nature reserve in all three habitat types. Physical observation of butterflies using pollard walk 1500m standardized transects were used. The level of disturbance can interfere with habitat structures, species distribution and abundance. The seasonality can affects species distribution and resource partitioning. A potential seasonality difference in butterfly composition within the sites was tested and diversity indices were measured. A total of 106 species of 49 genera and 5 families were sighted. Shannon–Weiner diversity indices and evenness showed (H’) 1.42, (E’) 0.79 respectively. The overall butterfly abundance was very different in 2017 as compared to the 1997. The results show that there were no significant changes in rank abundance for the identified 60 set of species. The results show that butterflies are evenly distributed based on availability of host plants and nutrition for adult butterflies.

Arabuko Sokoke Forest (ASF) is ranked second in Africa and fifty globally in biodiversity richness. It is 420 km2 (Oyugi et al., 2007). The Arabuko Sokoke forest is among the forested Kenya represents an excellent study region to test for potential effects from different environmental conditions and seasonal fluctuations of resource availability on the occurrence of species. The forest comprises of different natural forest types and portion of plantations. Arabuko Sokoke forest experiences strong climatic seasonality, with rainy and dry seasons (Oyugi et al., 2007). Butterfly abundance and diversity is high during the rainy season, while it becomes scarce during the dry season.

Seasonal shifts (rainy and dry season) may strongly impact the availability of resources like food, and thus strongly affect the occurrence and distribution of taxa, and the behaviour, i.e. movement and migration of individuals. Thus, seasonality can impact species behaviour and the structure of a community (Hulbert and Haskell, 2003). Potential responses to habitat changes may be mediated by the degree of ecological specialization and dispersal behavior of taxa (Tscharntke et al., 2002, 2012). Both parameters determine the ecological plasticity and adaptability of species on environmental changes, including anthropogenic disturbances (Habel et al., 2018). Habitat generalists use various resources and different habitats and thus are assumed to respond more plastic on environmental changes if compared with habitat specialists relying on very specific habitat conditions and resources (Louy et al., 2007; Junker and Schmitt, 2010).

Some butterfly species display a high level of ecological specialization in regard of caterpillar host plant selection and habitat structures (Settele et al., 1999; Habel et al., 2018). The taxonomy, distribution and habitat of most Kenyan butterfly species are well studied (Larsen, 1991) and thus making them a suitable model organism to study. Butterfly farming involves the extraction of female butterflies from the forest for onward breeding at the farms by majority of the breeders for commercial purpose. An early study conducted by Gordon and Ayiemba, 1997) in Arabuko Sokoke Nature Reserve suggested that there had been no adverse impacts since butterfly farming was introduced in 1993.

The aesthetic appeal and positive appreciation of butterflies are almost most studied taxa, this is because of their appeal easy to breed and capture among other factors. The word trade in butterflies alone has been estimated as much as USD$ 200 Million annually (Boppr’e and Vane-Wright, 2012). The butterfly farming system has been carefully devised to balance aspects of both conservation and trade; particularly to promote habitat conservation and protection; whilst simultaneously providing some income to people in rural area. It is also provides educational opportunities through its strong associations with schools and the general public (IUCN, 1980).

Worldwide, the number of pupae exported runs to several million per annum, with a dollar value to suppliers approximately twice that number. Speculating on a total sale of 5-10 million pupae per annum worldwide, this would represent an annual market value of livestock in the range USD 10-20 million (Morris et al., 1991). About 2 million pupae per year are imported into the European Union (Boppr’e and Vane-Wright, 2012). Since 2000, the average value of pupae exported from Costa Rica exceeded USD 700,000 per year (Rios, 2002; Montero, 2007). Globally, it is estimated that about 40 million people visit butterfly houses and butterfly gardens per year, 26 million in USA alone (Rios, 2002). Although some believe the industry can make a direct input to conservation (Hughes and Bennett, 1991; Van der Heyden, 1992; Gordon and Ayiemba, 2003; Goh, 2007; Saul-Gershenz, 2009; Sambhu and Van der Heyden, 2010).

The study was carried out in the Nature Reserve of Arabuko-Sokoke Forest, situated in Kilifi County on the Kenyan Coast (Fig. 1). It is located at Gede, South of the Sabaki River and to the North of Kilifi Creek, between 0311 and 0329 S and 3948 and 4000 E. 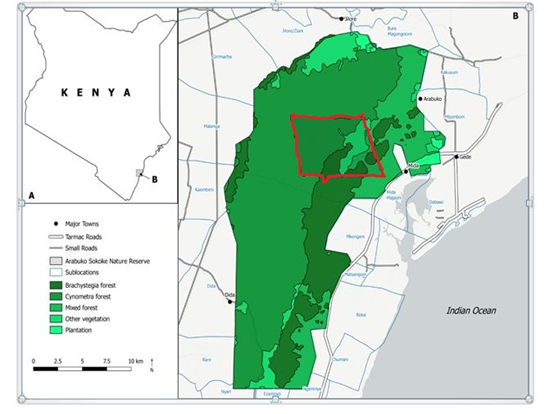 This is a dense forest type which extends to about 7000ha on wetter coastal sands in the east of ASF. This is lowland forest which occupies an area of about 6.5 square km, the forest is dense with nearly continuous canopy as low as 10-12 M and understory of tangled shrubs and small trees with moderate leaf litter.