Bioethanol is a form of renewable energy that can be produced from fuel or energy crops. Ethanol is produced by the fermentation of sugars present in agricultural feed stocks and crop residues. This study investigates the use of agrowastes like groundnut shells for ethanol production. Initially, the groundnut shells were washed, dried and grinded into powder. Then it was subjected to ethanol production using yeast. After 20 days of incubation the ethanol was estimated using potassium dichromate method. The maximum ethanol yield (1.55%) was obtained when 1% yeast was used. To increase the efficiency of ethanol production, the cellulolytic bacteria was isolated from the cow dung dumped soil site. The 10 bacterial isolates were screened for cellulase enzyme production. Among them one bacteria showed maximum decolourization of congored which was subjected for enzyme production in nutrient broth. The organism showed maximum enzyme activity of 558.12 U/ml. The isolated cellulolytic bacteria was identified as Bacillus anthracis using 16s rDNA sequencing. Ethanol production from the groundnut shells was again carried out with various concentration of crude cellulase enzyme isolated from the bacteria. The estimation result showed 3.8% of ethanol as maximum. Then the ethanol was condensed using rotary evaporator and when again estimated, showed 7.3% of ethanol. Finally, the presence of ethanol was confirmed by iodoform test. Thus, groundnut shells can efficiently be used for the production of ethanol which can be used as a high potential fuel source for the transportation in future.

In modern world, energy crisis is a concern that leads to the depletion of natural resources due to the increasing demand of energy. Natural resources are limited in supply and take very long time to replenish. Alternative energy resources are needed for the nation’s energy demand. Biofuels can help to improve the nation’s energy need and also aids to avoid the dependence of oil from foreign countries. The best way to fill the energy gap is the use of sustainable and renewable resources like lingo cellulosic biomass. Bioethanol due to its beneficial facts has a high potential for the replacement of fossil fuels. Bioethanol is divided as first and second generation ethanol based on the raw material used for the production. In first generation the bioethanol was produced using food crops and grains. It became a point of concern in terms of the food supply and demand. Lingo cellulosic biomass comprises of non-edible feedstock opened a new method for second generation bioethanol production. In second generation, cellulosic non edible agricultural crop residues were used for the production of bioethanol [1]. In Brazil, ethanol is principally made from sugarcane and it is generally used as a 100% ethanol fuel or in gasoline mixtures comprising 24% ethanol, 76% gasoline [2].

Mostly, the raw material used for the production of ethanol was pretreated using concentrated acid or alkali [7]. Enzymatic hydrolysis can also be performed for the conversion of cellulose found in biomass into fermentable sugars. In this study, the cellulase enzyme was produced from the bacteria isolated from soil. First, the groundnut shells were physically pretreated by autoclaving at 121°C. Then it was subjected to the enzyme (cellulase) which can break the β-1, 4 glycosidic bonds between the cellulose chains for the conversion of simple sugars [1]. These sugars are then converted into ethanol by fermentation using the yeast [3].

Groundnuts were purchased from the local market of Tirupur, Tamilnadu and manually the shells were removed. Groundnut shells were sun dried, powdered and were used as a raw material for further study.

Isolation of bacteria from soil

The soil sample was collected from the cow dung dumped site for the isolation of cellulolytic bacteria. Initially, 1g of soil sample was weighed and dissolved in 100 ml of distilled water. From this 1ml was taken and added into the test tube containing 9 ml of distilled water. It was considered as 10-2 dilution. Similarly tenfold dilutions were made from tube 1 through tube 7 by transferring 1ml from tube to tube. From each dilutions 0.1ml was transferred to the nutrient agar plates separately and spread over the agar surface using L rod. Then the plates were incubated at 37°C for 24 hours. After incubation the selected bacterial isolates were pure cultured and used for further screening process [8].

A loopful of bacterial culture was inoculated into 100 ml nutrient broth. The broth was incubated for 24 hours. After incubation the overnight grown culture was taken and centrifuged at 10,000 rpm for 15 minutes. The pellet was discarded and the supernatant was transferred to fresh tube. This supernatant was taken as crude enzyme source and tested for the enzyme production. The carboxy methyl cellulase activity of crude enzyme was assayed using a method described by Miller (1959) with some modifications. Varying concentration of culture supernatant such as 1ml to 5ml was taken into a series of test tubes. To this 0.5 ml of 1% CMC prepared in 50 mM sodium citrate buffer (pH 4.8) was added and incubated at 60°C for 30 minutes. The reaction was terminated by adding 3 ml of DNSA reagent and subsequently placing the tubes in boiling water bath at 100 °C for 15 minutes.  Finally the absorbance was measured at 575nm using spectrophotometer [8].

10g groundnut shell powder was physically pretreated and added to 100ml distilled water. It was then autoclaved at 120°C for 15 minutes. To this, varying concentration of yeast (0.25%- 1%) was added and kept for incubation days at room temperature for 20 days.

After incubation, 10 ml of fermented broth was transferred to a centrifuge tube and it was centrifuged for 10,000 rpm for 15 minutes. The supernatant was collected and used for ethanol estimation. From each concentration, 5 ml of supernatant was taken in a conical flask and to this 12.5 ml of chromic acid was added. Then all the flasks were made up to 25ml using distilled water and kept in boiling water bath for 15 minutes at 80 °C. After incubation the tubes were allowed to cool down and the absorbance was measured using spectrophotometer at 600nm [10].

To increase the ethanol production crude cellulase enzyme of different concentration was added to tubes with constant yeast concentration (1%). For this 10g of groundnut shell powder was taken in 100 ml distilled water. Physical pretreatment was carried out by autoclaving at 120 °C for 15 minutes. After that varying concentration of crude enzyme (1-5%) was added to each flask for saccharification purpose. The pH was checked and then the flasks were incubated for 20 days at room temperature. After incubation the samples were tested for ethanol production using potassium dichromate method [7].

Confirmation test for the presence of ethanol

1 ml of condensed sample was placed in a test tube; to this 1 ml of sodium hydroxide solution was added. Then a concentrated solution of iodine was added drop by drop to the test tube until the yellow colour and antiseptic smell appeared. This indicated the presence of ethanol [11]. 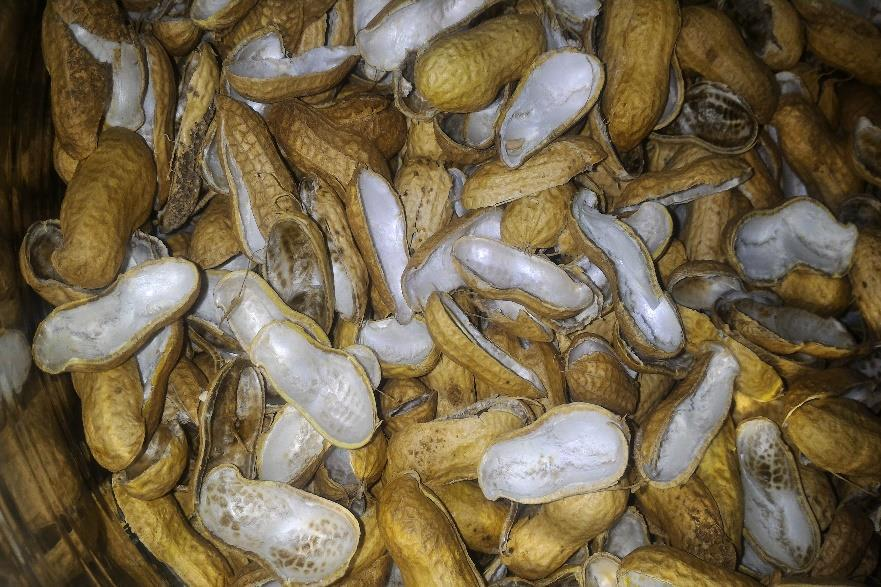 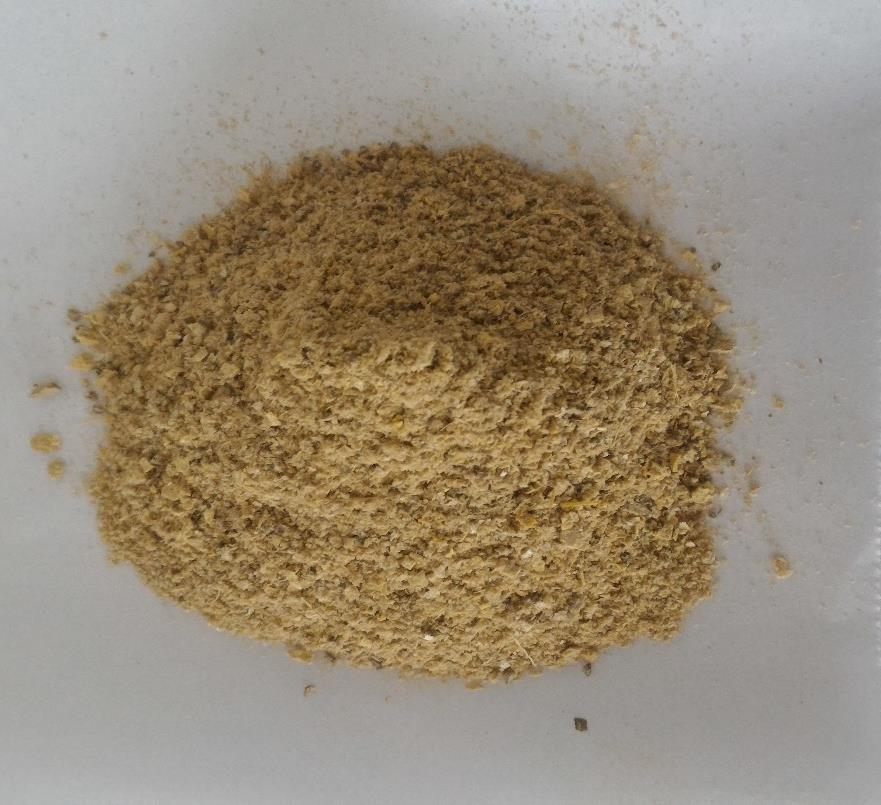 Isolation of bacteria from soil

After incubation based on the different colony morphology on the nutrient agar 10 bacterial isolates were selected and then the pure cultures of the colonies were isolated (Figure 3). Basavaraj et al., (2014) reported that a total of 57 bacterial cultures were isolated based on Morphology and Biochemical characterization from the soil samples [12]. 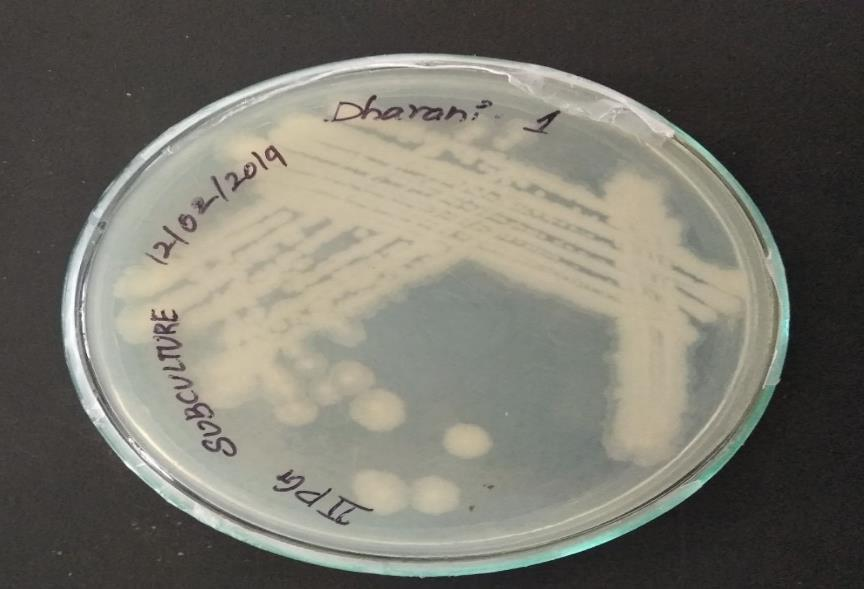 Among the 10 bacterial isolates, one bacterial isolate showed the maximum decolorization of congo red after 48 hours of incubation, which indicated the cellulose degrading ability of the bacteria. Cellulolytic bacteria isolated from agricultural field showed maximal cellulase production after 48 hours of incubation at 45 °C in medium containing 1.5% carboxymethyl cellulose (CMC) as substrate [13]. Among 57 isolated strains of Basavaraj et al., (2014), three cellulolytic bacterial strains showed maximum enzyme activity [12]. In most of the studies, the cellulose degrading organisms showed decolourisation of congo red after 48hours of incubation (Figure 4). 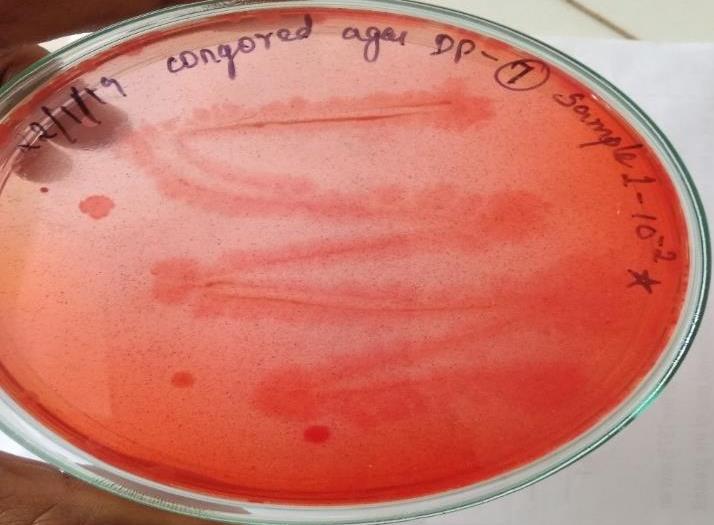 The colony morphology of the bacterial isolate was flat or slightly convex with irregular borders and ground-glass appearance. The isolated bacterium was identified as gram positive, rod shaped bacterium Gram’s staining (Figure 5). 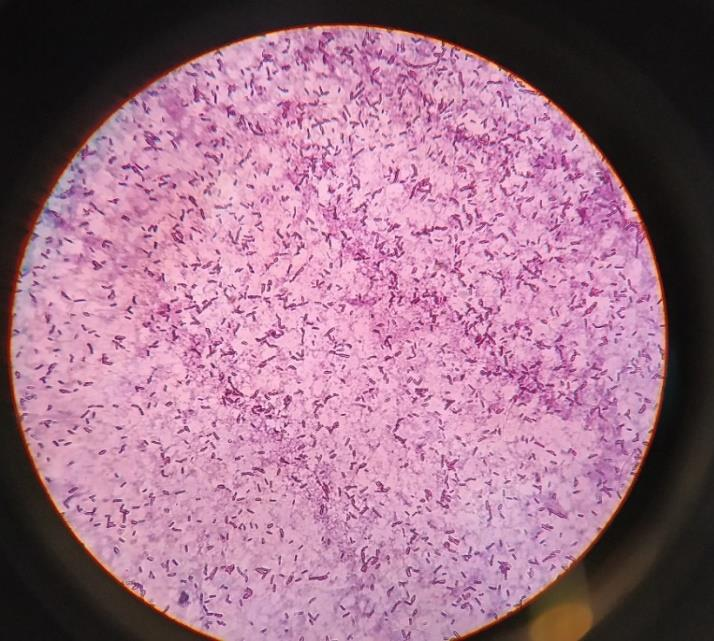 16s rDNA sequencing was carried out to identify the bacteria. The bacterial isolate was found to be Bacillus anthracis which showed high similarity with Top based on nucleotide homology and phylogenetic analysis.

Cellulase producing capacity of the Bacillus anthracis was estimated using DNSA method and it showed 558.12 U/ml of enzyme activity (Figure 6). Cellulase activity is mainly evaluated using a reducing sugar assay to measure the end products of cellulase hydrolysis activities. Thus, the results of an assay are typically expressed as the hydrolysis capacity of the enzymes. It cannot be easily expressed in a quantitative manner, lacks theoretical basis and does not consider all effective factors, such as concentration of cellulose and cellulase, the hydrolysis time, the ratio of crystalline and amorphous cellulose. Researchers have mainly focused on improving methods for measurement ofcellulase activity which have already been widely used. Thus, an accurate and reproducible assay for the measurement of cellulase hydrolysis rate is still required [15]. 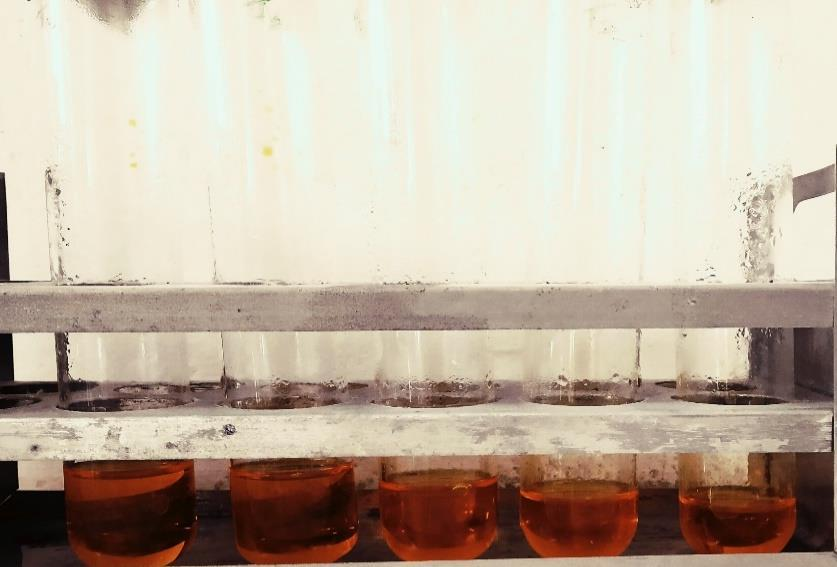 After 20 days of fermentation, ethanol production was observed on each flask containing 10g of groundnut shells in 100ml distilled water with various yeast concentrations (0.25-1%). Mostly the ethanol estimation was carried out using a standard potassium dichromate method. The flask containing 1% yeast concentration showed highest ethanol production. There was the gradual increase in the amount of ethanol produced as the concentration of yeast increases (Table 1). When compared to other confirmation methods of ethanol, potassium dichromate method is more efficient for ethanol estimation. It was used in most of the research studies. Some of the research works used Gas chromatography technique for the quantification of ethanol [14].

The ethanol produced after 20 days of incubation with different enzyme concentration was measured using potassium dichromate method (Figure 7). Saccharification of groundnut shell powder with the increasing concentration of crude cellulase enzyme showed gradual increase in the ethanol production. Maximum production of 3.8% ethanol was obtained when 5% crude cellulase enzyme was used (Table 2). Rabah, et al., (2011) used Saccharomyces cerevisiae and Zymomonas mobilis for the hydrolysis and fermentation of groundnut shell and rice husk. The study compared the ethanol yield when Saccharomyces cerevisiae and Zymomonas mobilis used alone and also compared when combination of these two microorganisms used. Maximum ethanol yield of 0.955% was obtained when mixture of Saccharomyces cerevisiae and Zymomonas mobilis used, while the lowest concentration of ethanol 0.105% was obtained when Zymomonas mobilis was used alone [16]. 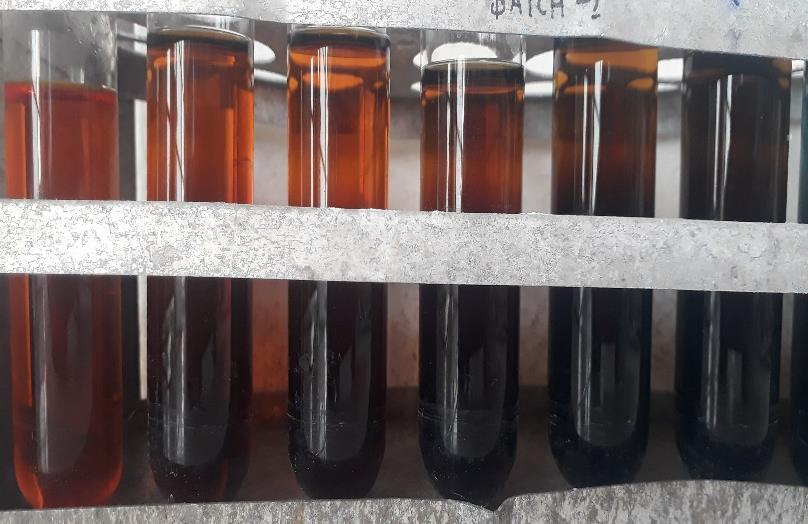 After saccharification the fermentation broth which showed maximum ethanol production was condensed using rotary evaporator in order to get ethanol with less concentration of water. The condensed ethanol was also estimated by potassium dichromate method and it showed 7.3% of ethanol (Figure 8). There is 3.5 % increase in ethanol concentration was observed before and after condensation of ethanol. 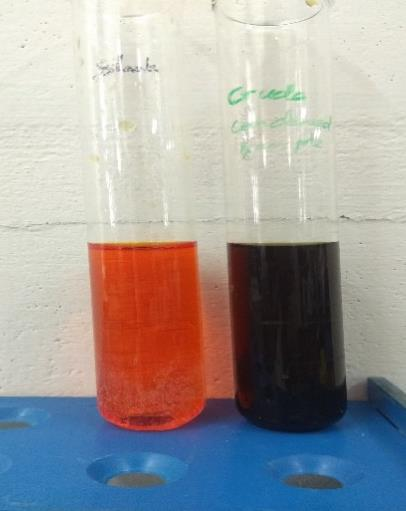 After addition of iodine solution, yellow colour precipitate was formed (Figure 9). This indicated the presence of ethanol [11]. 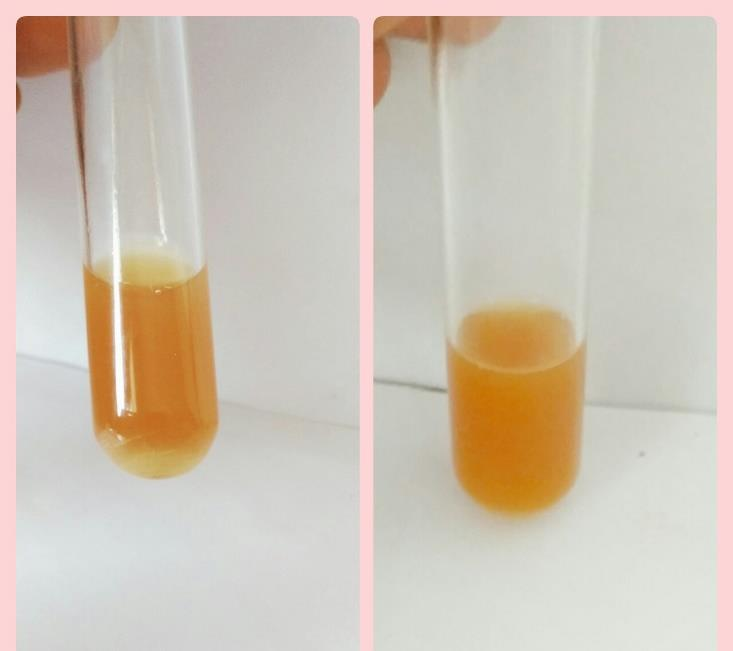 Bioethanol has wide range of applications in the pharmaceutical sector, in the chemical industry and as a fuel. This reduces the CO2 emissions into the atmosphere as well as dependence of oil from abroad. Present study was aimed at using groundnut shells for the production of ethanol using Bacillus anthracis and yeast (Saccharomyces cereviseae) by fermentation process. This study confirmed that the groundnut shells can be efficiently used as a good source for ethanol production and it can be applied for large scale production. Further, it can be used as a biofuel in future.

The authors acknowledge the support rendered by Department of Biotechnology, Govt. of India under DBT STAR College scheme, DST-FIST for providing support to carry out this research work. Also the authors express their gratitude towards the host institution Dr.N.G.P Arts and Science College, Managenent, Principal and Deans for rendering all the facilities and support to carry out the present work. Communication  number DrNGPASC 2019-20 BS009.