Background: Tuberculosis treatment has become difficult due to development of strains that are resistant to both first and second-line anti-TB drugs. This calls for a continued development of new drugs with novel targets against multi and extensively drug-resistant strains of M. tuberculosis. The aims of the study were; i) to determine the antimycobacterial activity of two synthetic alkaloids i.e., acridine-9-carboraldehyde and 9-hydroxy-4-methoxy acridine on both susceptible and multidrug-resistant TB clinical isolates and ii) to determine interactions between the alkaloids and anti-TB drugs iii) to determine the toxicity profile of the most active alkaloid.

Methods: Resazurin reduction microplate assay (REMA) was used to determine the minimum inhibitory concentrations of acridine-9-carboral-dehyde and 9-hydroxy-4-methoxy acridine as well as their interactions with conventional anti-TB drugs ie isoniazid, rifampicin and ciprofloxacin.

Results: Acridine-9-carboraldehyde was active on both susceptible and multidrug-resistant strains of TB with minimum inhibitory concentrations of 0.238µg/mL and 0.108 µg/mL on the pan-sensitive and clinical susceptible strains and 0.157 µg/mL and 0.196 µg/mL on the rifampicin resistant and multidrug-resistant strains respectively. In addition, acridine-9-carboraldehyde was synergistic to both rifampicin and levofloxacin with a fractional inhibitory concentration index of ≤ 0.5.

Tuberculosis (TB) is a chronic, progressive and highly infectious mycobacterial infection that asymptomatically affects one quarter of the world’s population and is responsible for 2 million deaths annually worldwide [1, 2]. The increasing spread of TB is currently paralleled by a rapid increase in multidrug-resistant TB and extensively drug-resistant TB (MDR-TB and XDR-TB) making the disease incurable [3]. In 2018, about 484,000 cases of MDR TB were reported by WHO and these accounted for 20% of the patients with a history of previous TB treatment and 3.4% of the new TB infection [4]. The rise of drug-resistant M. tuberculosis and HIV /AIDS co-infections especially in low-and-middle-income countries (LMICs) has increased TB related mortality and thus threatens TB control and eradication efforts [5].

Successful implementation of the WHO strategy for tuberculosis control depends on early detection and prompt treatment of infectious TB cases [6]. However, the high level of drug resistance threatens to slow progress towards a TB free world. This is especially due to the challenges of managing drug-resistant M. tuberculosis which involves the use of second-line drugs which are costly with numerous adverse drug reactions and a prolonged duration of treatment [7].

Although discovery and development of new anti-TB drugs is key in addressing the challenge of high level of drug resistance in TB treatment, there is currently a limited number of novel agents in the TB drug development pipeline. For the first time in 50 years, very few new drugs including bedaquiline and delamanid have been developed and recommended by WHO as novel anti-TB agents [8, 9]. Bedaquiline and delamanid have novel specific targets in the M. tuberculosis organism as ATP synthase inhibitors and mycolic acid synthesis inhibitors respectively but they donot provide sufficient remedy against drug-resistant strains of M. tuberculosis especially XDR-TB [10, 11]. Despite the inclusion of bedaquiline and delamanid in MDR treatment regimens having shortened the treatment duration of MDR-TB from 20 months to less than 12 months and eliminating the necessity of using injectable anti-TB drugs [12], there have been recent reports of delamanid and bedaquilin drug resistance in patients with XDR-TB [13,14]. There is thus a need for continued search for novel agents in the treatment of Mycobacterium tuberculosis; acridine alkaloids being among such agents.

Acridine alkaloids and their derivatives have been investigated as possible therapeutic agents in the treatment of different ailments including cancer, Alzheimer’s disease, malaria, herpes simplex and bacterial infections [15, 16]. This is due to their varied structures and ability to affect several biochemical processes including DNA intercalation, protein and lipid metabolism [17]. Previous studies have reported that naturally occurring acridine alkaloids from Zanthoxyllum leprieurii have activity against preserved M. tuberculosis strains [18]. However, due to the challenges of mass production, the study sought to assess presence of anti-mycobacterial activity in synthetic acridine alkaloids. The activity of acridine alkaloids on clinical multidrug-resistant TB is unknown. This study aimed at; i) to determine the antimycobacterial activity of two synthetic alkaloids i.e., acridine-9-carboraldehyde and 9-hydroxy-4-methoxy acridine on both susceptible and multidrug-resistant TB clinical isolates ii) to determine the interactions between the synthetic alkaloids and anti-TB drugs.

2.3 Culture Medium: Middlebrook 7H10 (#8338821) and 7H9 (#6333553) broth supplemented with 10% oleic acid, albumin, dextrose, catalase (OADC) enrichment were used as the solid and liquid media, respectively, to grow the Mycobacterium sp. The culture media were prepared according to the manufacturer’s guidelines.

2.4 Inoculum Preparation: M. tuberculosis suspensions were inoculated on Middlebrook 7H10 and harvested in their growth log-phase after twenty-one days. The inoculum was scrapped and introduced into 7H9 broth (10 mL) supplemented with 0.2% (v/v) glycerol and OADC and incubated at 37°C for 24 hours. Using a nephrometer, the inoculum was adjusted to an optical density of 0.5 McFarland Standard (approximately 1.5x 108 CFU colony forming units) by adding normal saline until the required density. 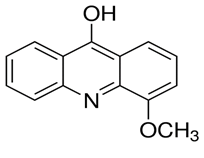 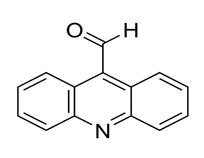 2.5 Antimycobacterial Susceptibility Testing: Resazurin reduction microplate assay (REMA) was used as previously described [19]. In brief, 200 μl of sterile distilled water was added to all outer perimeter wells of 96 round bottomed plates. This was done to minimize dehydration. To the rest of the wells, 100 μl of Middle Brook 7H9 broth was added. One hundred micro liters (100 μl) of double concentration drug solutions were added to the wells in rows B to G in column 2 and serial dilutions were made through column 10 using a multi-channel pipette. To wells in rows 2–11, 100 μl of M. tuberculosis inoculum was added, bringing the final volume to 200 μl per well. The wells in column 11 were used as negative control wells containing only broth and inoculum. The plates were incubated at 37 °C for 24 hrs in a 5% CO2 incubator. The tests were prepared in triplicate for each of the strains used. Thirty micro liters of freshly prepared resazurin dye was added to one of the control wells and further incubated at 37 °C for 24 hrs. Observation of a color change from blue to pink indicated that there was growth and so the dye was added to all wells and further incubated at 37°C for 24 hours. The minimum inhibitory concentration (MIC) was defined as the lowest drug concentration which prevented a color change from blue to pink. The bioassays were performed in a level 3 bio-safety mycobacteriology laboratory at JCRC.

where A and B are the two respective test agents. The interaction between two test agents in combination can either be synergistic, additive, no effect, or antagonistic. If FICI value is less than or equal to 0.5 then the MIC of the combination is lower than either of the drugs used alone and therefore there is synergism. If the FICI is greater than 0.5 but less than 1.0, then the interaction is indifferent and if the FICI is greater than 1.0, then the interaction is regarded as antagonist [20].

Data was entered in Microsoft Office Excel, 2010 and then transferred to Graph Pad prism version 9.2.0 INC, USA, for statistical analysis. The student’s t test was performed using a 95% confidence interval.

The study investigated the antimycobacterial activity of two synthetic acridine alkaloids including acridine-9-carboraldehyde and 9-hydroxy-4-methoxy acridine against clinical strains of M. tuberculosis including, a susceptible isolate, rifampicin resistant isolate, a multidrug-resistant isolate, and a pan-sensitive strain using the resazurin reduction microtitre assay. In this study, rifampicin, isoniazid, and levofloxacin were used as positive controls.

5.1.1 Susceptible clinical Strains: The MIC values of acridine-9-carboraldehyde on the preserved (H37Rv) and clinical susceptible strains were low i.e., 0.238 µg/mL and 0.108 µg/mL respectively (Table 1). When compared to the positive controls including isoniazid with MIC of 0.075 µg/mL on the H37Rv and 0.2 µg/mL on the susceptible strain, the activity of acridine-9-carboraldehyde was statistically not different (p=0.81 and 0.01 respectively).

Treatment of tuberculosis faces a double challenge of limited new drugs in the development pipeline in addition to increased resistance to the existing therapies. This has limited the therapeutic options available for TB treatment especially in LMICs which bear the highest burden of the disease. Most local communities in LMICs resort to the use of traditional medicines in the management of TB and related symptoms. However, there is limited scientific literature to support the practice. A previous study (Bunalema et al., 2017) showed that naturally occuring acridine alkaloids present in some local medicinal plants have activity against M. tuberculosis. However, due to the challenges of mass production of the natural acridine alkaloids from plant sources, this study sought to determine the anti-mycobacterial activity of synthetic acridine alkaloids. In this study, acridine-9-carboraldehyde, a synthetic acridine alkaloid was active against the clinical susceptible TB isolates as well as the rifampicin resistant and multidrug-resistant strains of Mycobacterium tuberculosis. Presence of anti-TB activity in synthetic acridine alkaloids as found in this study is timely especially due to the challenges associated with mass production of medicines from natural sources like plants. The establishment of anti-TB activity of acridine alkaloids is welcome news for TB control efforts especially due to widespread drug resistance and the limited number of anti-TB compounds in the drug development pipeline. With the increasing resistance to the existing anti-TB drugs, the discovery and development of new compounds is urgently needed. This in addition to development of interventions to slow the development and spread of TB resistance are fundamental tenants in the fight against the disease.

Remarkably, in addition to in-vitro antimycobacterial activity, acridine-9-carboraldehyde showed synergistic activity when combined with first-line and second-line anti-TB drugs (rifampicin and levofloxacin) on sensitive and resistant clinical Mycobacterium tuberculosis respectively. The minimum inhibitory concentrations of both rifampicin and isoniazid were reduced to almost half (FICI=0.5) in combination with acridine-9-carboraldehyde. The exact mechanism by which the acridine decreased rifampicin and levofloxacin MIC is unknown. Nevertheless, Acridine alkaloids are known to be highly lipophilic and could have enhanced entry of rifampicn and levofloxacin into the cell increasing the intracellular concentration. However, rifampicin and levofloxacin are already known lipophilic drugs that rapidly penetrate the complex highly hydrophobic mycobacteria cell wall. Consequently, the increased cell wall permeability by the acridine may not be the only reason for the observed synergistic interaction. On the other hand, the synergy could be due to the acridine’s different mechanism of action on the M. tuberculosis. Several studies have demonstrated that acridine alkaloids are intercalating compounds that eventually inhibit DNA synthesis through inhibiting topoisomerase-I 21. In addition, previous studies have shown that rifampicin resistance is characterized by increased expression of the p-gp efflux pump which is modulated by acridine congeners 22, 23. The use of combination anti-TB drugs is core to the current modalities in anti-TB treatment and has been shown to reduce/slow resistance development in management of infectious diseases especially TB. Therefore, the discovery of new agents with synergistic activity with the current anti-TB drugs gives hope to the disease control efforts.

Our study has showed that acridine-9-carboraldehyde is active against both susceptible and multidrug-resistant strains of tuberculosis thus having potential to be developed into a novel anti-TB drug. Secondly, it interacts with both rifampicin and ciprofloxacin, two of the drugs that form a mainstay as first and second-line drugs thus showing potential of its use in combination with existing remedies.

Data can be made available on special request from the corresponding author.

The authors would like to thank the international foundation of Science and Makerere University Research innovation fund for providing financial support. We acknowledge the support of Joint Clinical Research Center staff for the technical support they provided us.