JAL-TA9 Inhibits Aggregation of hPrP180-192 through the Cleavage Reaction

We identified that JAL-TA9, a 9-mer synthetic peptide derived from Tob1 protein, possesses catalytic activity and cleaves Aβ42. We also determined that the C-terminal end of Prion protein (PrP) is an essential region for aggregation of PrP using PrP fragment peptides. We investigated the effect of JAL-TA9 on hPrP180-192, which is a fragment peptide derived from human prion protein. Conformational studies were performed using CD analysis. The cleavage reaction was identified using HPLC and MS analyses. JAL TA9 inhibited the formation of aggregated hPrP180-192 and decreased the aggregated hPrP180-192 level through the cleavage reaction. These results indicate that JAL-TA9 could be a promising candidate for developing novel drugs against prion diseases and Alzheimer’s disease.

Aggregation is thought to be the critical event in protein misfolding disorders (PMDs), such as prion diseases, Alzheimer’s disease (AD), Parkinson’s disease (PD), and amyotrophic lateral sclerosis (ALS) for inducing toxicity against the central nervous system or peripheral organs. Therefore, many natural compounds and chemical molecules have been tested for developing an effective inhibitor that could inhibit the aggregation of these proteins. To this date, no such efficient therapy that could inhibit the progression of PMDs has been reported [1]. Prion protein (PrP) is a cell-surface glycoprotein that has been associated with the pathogenesis of a range of neurodegenerative disorders which are caused due to the conversion of the cellular prion protein (PrPC) to its protease-resistant misfolded isoform, scrapie prion protein (PrPSc) [2-6]. The underlying mechanisms of conversion and aggregation of PrP remain unexplored, owing to their solubility and aggregation in vitro. In recent years, many researchers have used the fragment peptides of human PrP (hPrP) to understand its physical and physiological properties [7-13]. Structural studies of fragment peptides using nuclear magnetic resonance (NMR) and circular dichroism (CD) have shown that the C-terminal domain plays an important role in the pathogenic properties of PrPSc [14-21]. Furthermore, the C-terminal region, which is composed of two α-helices, two glycosylation sites, and a glycosylphosphatidylinositol anchor inside a folded region [22-23] shows high resistance to proteases such as MT1-MMP, MT3-MMP, and MMP-7. As only MMP can cleave hPrP180-192 with one cleavage site [8], we hypothesized that hPrP180-192 could be an important sequence for the aggregation of PrP and might prove useful in identifying a potent inhibitor of PrP aggregation.

We recently showed that a synthetic 9-mer peptide, JAL-TA9 (YKGSGFRMI), possesses proteolytic activity and cleaves amyloid-β protein (Aβ42) at multiple cleavage sites, especially on the central region. We also proposed that atermed Catalytide (Catalytic peptide) as the generally name of peptide possessing proteolytic activity [24-27]. JAL-TA9 is a fragment peptide from the Box A region of Tob1 protein, which is a highly conserved homology domain of Tob/BTG family of proteins which comprises of Tob1, Tob2, BTG1, BTG2, BTG3/ANA, and BTG4. These proteins possess antiproliferative activities and are involved in the regulation of tumorigenesis. However, there have been no reports about the role of Box A region of Tob/BTG family [28-33]. In this study, we evaluated the effect of JAL-TA9 on the conformational changes and aggregation of hPrP180-192 using CD and HPLC.

CD analysis: hPrP180-192 and JAL-TA9 were dissolved in 10 mM Tris-HCl to obtain a final concentration of 0.025 mM. The pH of Tris-HCl was adjusted to 7.5 using HCl. Reaction mixture of hPrP180-192 and JAL-TA9 were incubated at 37 °C. CD analysis was performed using a J-805 spectropolarimeter (JASCO, Japan). The CD spectra were measured using a 0.2 cm path-length quartz cell. Signals were collected from 190 nm to 260 nm at approximately 26 °C with a scan rate of 10 nm/min, and a response time of 4 s. Each spectrum comprises of four accumulated scans.

Analysis of proteolytic activity and determination of cleavage sites: 0.025 mM hPrP180-192 was incubated with and without the 0.2 mM JAL-TA9 in 10 mM Tris-HCl (pH 7.5) at 37 °C. Twenty microliters of each reaction mixture was analyzed in a time-dependent manner using the analytical HPLC system described in section 2.2.2. For the peak collection, 40 μL of reaction mixture was loaded into the same HPLC system, and the peak fractions monitored at 220 nm were collected into microtubes (Eppendorf Safe-Lock Tubes, 1.5 mL). After lyophilization, the appropriate quantity of 36 % CH3CN containing 0.1 % HCOOH was determined based on the chromatographic peak height and the two reagents were mixed with the help of an automatic mixer. The cleavage sites were determined by ESI-MS using the flow injection method with 70 % CH3CN containing 0.1 % HCOOH on a Qstar Hybrid LC-MS/MS system (ABI). The flow rate was set at 0.1 mL/min. 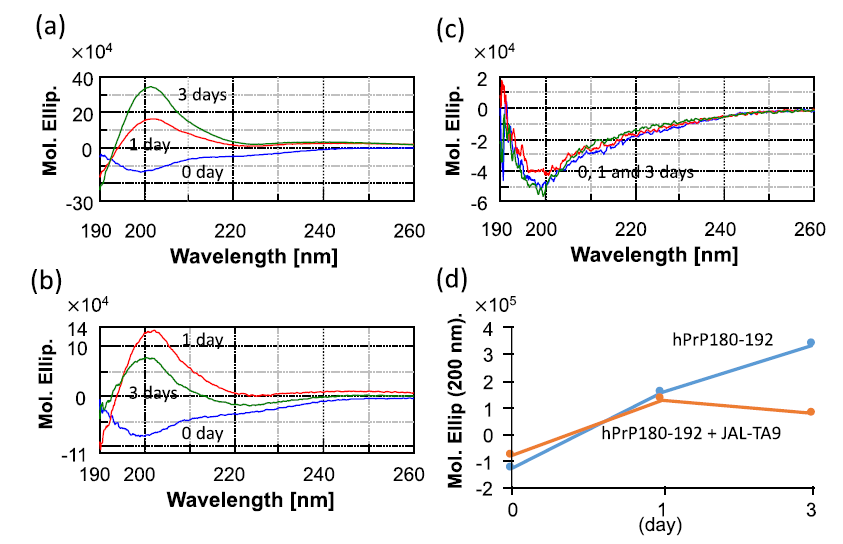 We compared the molar ellipticity of the samples at the wavelength of 200 nm, which corresponds to the β-sheet structure [34-35]. No differences were observed on day 0 and 1. On the 3rd day, we observed differences between the molar ellipticity of hPrP180-192 in the presence and absence of JAL-TA9 (Figure 1d). These results indicate that the quantity of hPrP180-192 in the β-sheet conformation increased in a time-dependent manner and was suppressed in the presence of JAL-TA9 (Figures 1c and d). Furthermore, JAL-TA9 was able to affect hPrP180-192 post the conformational changes (from random coil to β-sheet structure).

Proteolytic activity of JAL-TA9 against hPrP180-192

We also examined the proteolytic activity of JAL-TA9 against hPrP180-192 to understand how JAL-TA9 suppresses the β-sheet structure of hPrP180-192. The proteolytic activity was analyzed as per the protocol described in our previous studies [24-27]. The reaction mixture containing 0.025 mM of hPrP180-192 and 0.2 mM of JAL-TA9 was co-incubated in 10 mM Tris-HCl buffer (pH 7.5) at 37 °C, and 20 µL of that reaction mixture was analyzed by analytical (HPLC) from day 0 day to day 5 (Figures S1 and 2). To identify the cleavage site, 40 µL of the reaction mixture was analyzed and corrected all peaks appeared on 5 days and then applied by MS analysis (Figure S1). The chromatograms revealed a slight decrease in hPrP180-192 levels due to its aggregation; however, no new peaks were observed (Figures 2a and S1). In contrast, new peaks appeared, and the peak height of hPrP180-192 showed a decrease in the presence of JAL-TA9 (Figures 2 b and S2). All newly appearing peaks were collected and analyzed using MS analysis. P1 and P2 were identified as hPrP183-186 and hPrP180-191, respectively (Figure 3). The other peaks were identified as fragment peptides of JAL-TA9 produced by auto-degradation (Figure S2). These data indicated that JAL-TA9 cleaved hPrP180-192 and led to the suppression of conformational changes in hPrP180-192. 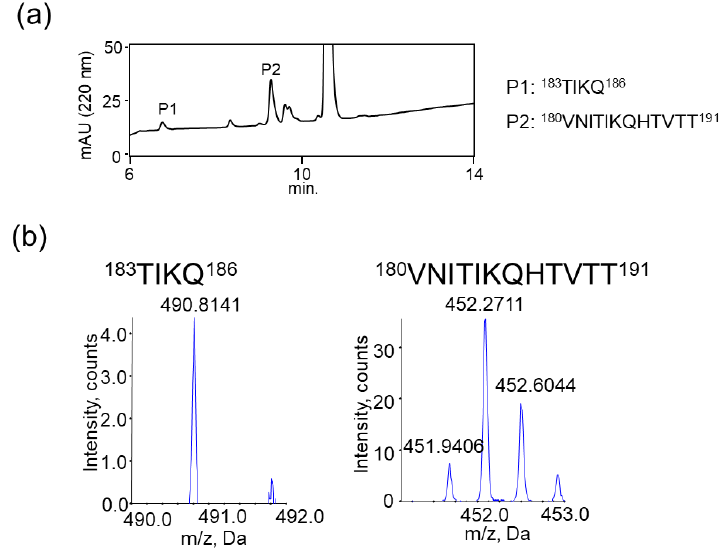 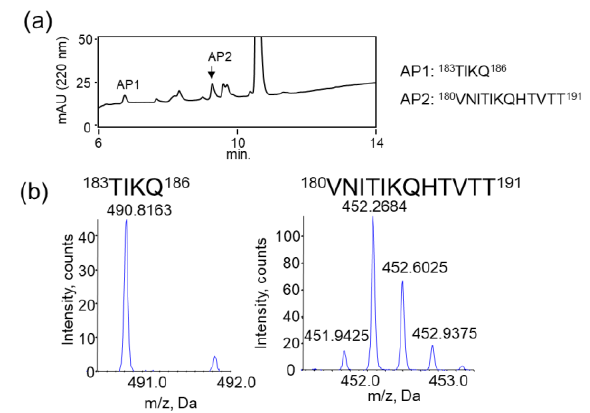 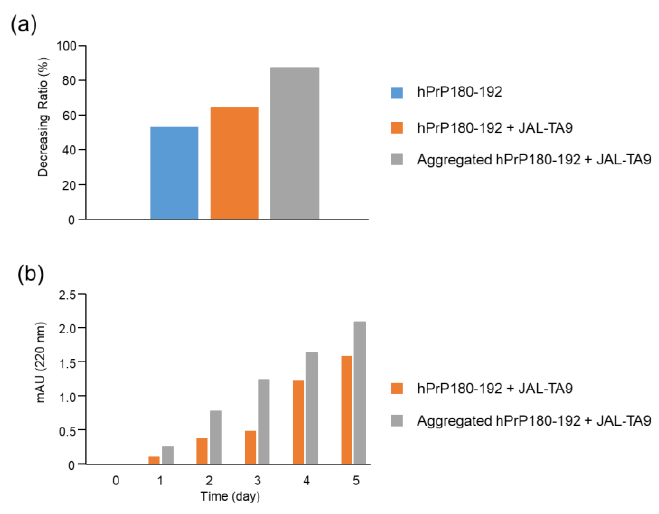 This work was supported by the Japan Society for the Promotion of Science (JSPS) Grants-in-Aid for Scientific Research (KAKENHI) Program, Grant Number 15K07908.