Genome editing technology based on the clustered regularly interspaced short palindromic repeats/Cas system is an important achievement of molecular biology. Nevertheless, public concerns regarding genetically modified organisms and regulatory restrictions have limited the use of this technology. Cell-penetrating peptides (CPPs) are protein transduction domains, usually less than dozens of amino acids, which have the ability to take cargo and penetrate the cell membrane of recipient cells. CPPs have only minor cytotoxicity and are ideal transfection tools for DNA-free transfection and genome editing in plants. In this review, we discuss the classifications and translocation mechanisms of CPPs, as well as the brief history of CPPs mediated DNA-free genome editing

The third-generation genome editing system represented by clustered regularly interspaced short palindromic repeats (CRISPR)/Cas is becoming the core technology for crop molecular breeding. This technology largely depends on genetic transformation. In theory, if the foreign gene is not eliminated after the editing event, the sgRNA and CRISPR/Cas9 gene in the recipient may continue to function, resulting in nonspecific double-strand breaks and repair. Therefore, off-target effects may be retained [1-7]. In Arabidopsis, the foreign genes can be eliminated, and the mutant genes can be retained in the T2 generation by fast-R tag-assisted screening [8]; however, public concerns regarding the safety of genetically modified organisms (GMOs) and regulatory restrictions have limited the use of CRISPR/Cas technology [9].

DNA-free transfection can be used to avoid the integration of foreign DNA into the genome of recipient cells. With the increased use of DNA-free transfection technology, represented by cell-penetrating peptides (CPPs) and biolistics, it is possible to overcome public concerns and achieve efficient DNA-free site-specific editing of target genes [10, 11].

In this review, we discuss the classifications and translocation mechanisms of CPPs, with an emphasis on their use in DNA-free genome editing technology.

Based on physicochemical properties, CPPs can be categorized into three groups: cationic, hydrophobic, and amphipathic (Table 1). Most CPPs belong to the cationic group and typically contain polyarginine, which results in a positive charge. For example, TAT is a typical cationic CPP encoded in the genome of HIV-1, and its dimer TAT2 is successfully utilized in plant transformation [13]. Additionally, Bilichak et al. inserted R9 and mCherry genes into the same expression frame, and after prokaryotic expression, the fusion protein (R9-cys-mCherry) was successfully transfected into wheat microspores. The amphipathic group, including VT5 and MAP, shows amphipathicity owing to the presence of lysine residues in their sequences [14]. The amphipathic α-helical motif usually has hydrophobic groups on one side, whereas the other side contains cationic and anionic groups [15]. Hydrophobic CPPs from signal peptides contain only apolar residues, such as methionine, valine, or alanine [16]; fibroblast growth factor (FGF) and Pep-7 belong to this group.

CPPs typically penetrate the cell membrane via direct translocation and endocytosis pathways (Figure 1). In the endocytosis pathway, once CPPs attach to the membrane, clathrin and caveolae are recruited. Finally, the coated CPPs and their cargo are translocated into the cytoplasm. In the clathrin-independent pathway, CPPs undergo macropinocytosis without clathrin or caveolae recruitment [17].

Direct translocation is an energy-independent pathway [18]. Positively charged amino acid residues interact with membrane phospholipids, interfere with membrane stability, and finally permit facilitate membrane penetration. There are three models for penetration of CPPs into the lipid bilayer: 1) inverted micelles [19], 2) the carpet model [20], and 3) pore formation [21]. The inverted micelle model was obtained from nuclear magnetic resonance imaging of penethrin internalization [19]. Cationic residues of CPPs were found to interact with negatively charged phospholipid groups, leading to the production of micelles enclosing the peptide and cargo. Through the hydrophobic motif in CPPs, micelles break apart in the cytoplasm and release their cargo. In the carpet model, cationic residues interact with phospholipids, leading to rotation of the peptide and interaction of the hydrophobic motif with the hydrophobic tails of phospholipids. CPP cargo then penetrates the membrane via breaks [22]. In the pore model, the hydrophobic motif of CPPs create bonds with the lipid, leading to the formation of transmembrane pores by hydrophilic residues [23]. The mechanism of translocation varies depending on the properties of CPPs. The nature and culture conditions of recipient cells can also affect the uptake mechanism. Several translocation modes may occur in a single experiment [15] (Figure 1). 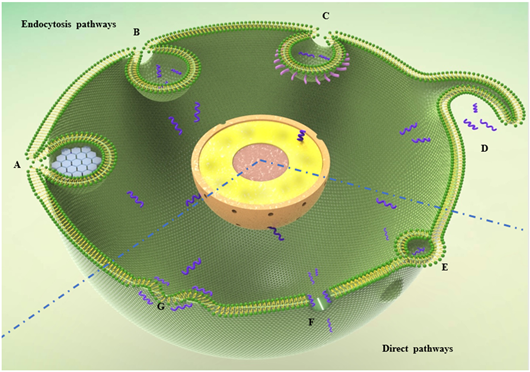 CPPs show weak cytotoxicity at lower concentrations [14, 16, 24, 25]. In basic research in mammalian cells, CPPs exhibit almost no toxic effects [26]. For example, even when used at a high concentration of 30 μM, antennapedia, TAT, and R9 show no obvious toxic effects [27]. In plant diploid cell transfection, trypan blue and FDA (fluorescein diacetate) staining results also demonstrated that CPPs had only minor effects on the viability of onion epidermal cells and wheat mesophyll cells, respectively [28, 29]. In wheat haploid transfection experiments, CPPs were shown to have weak effects on the viability of microspore cells [13]. Moreover, the toxicity of the fusion protein is related to the length and concentration of CPPs [24]. Taken together, these studies have shown that low concentrations of CPPs do not strongly inhibit recipient cell viability.

Transfection refers to the process of introducing exogenous biomacromolecules (e.g., DNA, RNA, or protein) into recipient cells. By contrast, genetic transformation, also known as transgenic technology, refers to the transfer of exogenous DNA into recipient cells and integration into the genome for stable inheritance. However, the use of genetic transformation is limited by public concerns regarding GMOs as well as regulatory restrictions. Therefore, efficient DNA-free (nontransgenic) transfection systems are essential for promoting the application of genome editing in plant breeding.

Biolistics (also known as microprojectile bombardment) is a direct and physical method to transfer foreign biomacromolecules into recipient cells. This method was first invented by Sanford and colleagues at Cornell University [30]. In this method, microcarriers encapsulated with exogenous biomacromolecules have sufficient kinetic energy to penetrate the cell wall and membrane of recipient cells. Although biolistics is a traditional transgenic method, when exogenous macromolecules encapsulated on microcarriers are proteins or RNA, rather than DNA, biolistics can be considered an important DNA-free transfection method [10, 11]. Because there is no exogenous DNA involved in the entire process, this DNA-free transfection technology may have broad applications. Biolistics can be utilized in various recipient cells that cannot be infected by Agrobacterium. Nevertheless, the physical damage caused by microparticles may also decrease cell viability.

CPPs are ideal transfection tools that can be combined with biomacromolecules and carry them into recipient cells [14, 16, 25, 26, 31]. The DNA from CPPs is very short, which may facilitate insertion into expression constructs containing the target gene. Fusion proteins can then be obtained by prokaryotic expression. Bilichak et al. constructed a gene encoding R9 and red fluorescent protein in a single expression construct; after prokaryotic expression, the fusion protein (R9-cys-mCherry) was successfully transfected into wheat microspores. Moreover, the CPP fusion protein was found to be an effective alternative to CRISPR ribonucleoprotein particle (RNP) transfection. In another study, the genome of human HEK293T cells was successfully edited by CPP-mediated DNA-free transfection; researchers expressed a cationic CPP gene (nine consecutive tandem arginines, R9) and the Cas9 gene together and then incubated fusion protein with sgRNA containing R9 synthesized in vitro to form a complex. Finally, with the help of R9, the fusion protein was successfully transfected into human HEK293T cells for DNA-free genome editing. CPP-mediated DNA-free transfection is still being developed [32] and may become an alternative to other transfection technologies.

Site-specific genome editing is a technology used to modify the DNA sequence of a target organism at the genome level [33]. This approach has been shown to have important applications in gene function analysis [34], genetic improvement [35, 36], and target gene activation [37]. Specific endonucleases, including zinc finger nucleases [38], transcription activator-like effector nucleases [39], and CRISPR/Cas proteins [35, 36, 40], have been successfully used in crop genetic improvement. Genome editing system based on the CRISPR/Cas system is becoming a core technology for crop molecular breeding. Using sgRNA, specific endonucleases can generate DNA double-strand breaks at a designated sequence. The DNA repair mechanism can then facilitate gene base insertion, deletion, or DNA fragment replacement at the target site, leading to site-specific editing of the target gene.

Currently, the most commonly used DNA-free plant genome editing system is the RGEN RNP editing system. RGEN RNP technology is used to incubate CRISPR/Cas protein (typically Cas9) and gRNA in vitro, leading to the formation of a ribonucleoprotein complex for translocation and then cutting the target DNA in the nuclei. The CRISPR/Cas protein is ultimately degraded by endogenous proteases, thereby realizing DNA-free genome editing [41, 42]. RGEN RNPs were first applied to nematodes and human 293 cells [41, 42] and were subsequently applied to genome editing in Arabidopsis, lettuce, tobacco [43], and wheat microspores [44]. In 2017, Kim et al. successfully applied CRISPR/cpf1 RNPs to edit soybean FAD2 and tobacco AOC genes. The editing efficiency was as high as 11.7%, and no off-target effects were detected [45], representing a major milestone in DNA-free genome editing for crop genetic improvement.

CPPs may be used as an alternative approach for CRISPR RNP intracellular delivery, and recent studies have reported the application of CPP-mediated DNA-free genome editing [32, 44].

Nuclear localization is essential for DNA-free genome editing; indeed, genome editing can only be achieved via translocation of the CPP-cargo into the nucleus [29]. Arginine-rich peptides (e.g., TAT and R9) generally have a nuclear localization function and can interact with nuclear pore complexes to facilitate the transport of the complex into the nucleus. Ramakrishna et al. first obtained human HEK293T gene-edited cells. Prokaryotic expression of a cationic CPP gene (9 arginine, 9R) and Cas9 gene was performed, and the purified fusion protein was then incubated with 9R-sgRNA in vitro. Finally, HEK293T cells were successfully transfected and edited via CPPs. Bilichak et al. also attempted to transfect wheat microspores with a CPP-mCherry fusion protein and eventually edit the genome by delivering ZNF protein [25, 44]. Compared with other chemical transfection methods, CPPs have low cytotoxicity, making them suitable for use in plant experiments (16, 25, 26, 44, 46-48). Accordingly, CPP-mediated transfection may become an important approach for DNA-free genome editing [32].