Chronic muscular skeletal pain syndromes remain a common and poorly understood medical problem. The classification of specific and nonspecific pain has not proven valuable. Therefore is seems necessary to introduce a new model as the basis for further research and clinical practice. We would suggest the functional system of behavior developed by Anokhin as a basic model. It contains all relevant elements influencing the development of chronic muscular skeletal pain. The interaction of pathomorphological and psychosocial factors, somatic dysfunctions and neurophysiological changes in the peripheral and central nervous system are thought to be relevant for the development of chronic muscular skeletal pain syndromes. The complex interactions and the possibility to compensate impairments can be shown within the model. Furthermore, a subgrouping of patients might be possible. For this a standardized clinical assessment should be developed and scientifically evaluated.

Chronic muscular skeletal pain syndromes (CMPS) are common, expensive and so far, not fully understood [1-7]. Low back pain (LBP) is divided in specific and nonspecific LBP. While specific LBP is defined by a clear pathomorphological cause for the pain (e.g. inflammation, fracture), for nonspecific LBP no cause has been defined. The diagnosis of nonspecific LBP results simply from the exclusion of a specific LBP [8]. Since the cause of the pain remains nonspecific, the treatments applied depend more on the treatment setting, on the specialty and the beliefs of the therapist and patient/therapist preferences than on clinical reasoning [9-11]. Scientific research on this basis remains somewhat nonconclusive [12]. Positive treatment outcome is only shown for multimodal treatment programs which target a variety of psychosocial, neurophysiological and functional problems [13-15]. So more than 20 years after the introduction of the “classification specific/nonspecific pain”, it must be concluded that it did not help to promote effective diagnostic or treatment for CMPS. It might be time to develop new models for the development and chronification of muscular skeletal pain in order to promote effective research and finally improve clinical outcome. For this we introduced an interdisciplinary working group consisting of physiatrist, orthopedic surgeons, psychiatrists, psychologists, general practitioners, pain specialists, rheumatologists, physiologists and manual therapists. The involved practitioners were working in out-and inpatient settings, in day units for chronic pain and at university hospitals. Over the last 2 Years the presented model was developed on the basis of literature review, clinical experience and intensive discussions. We concluded that CMPS is a multifactorial process. Pathomorphological changes, somatic dysfunctions, psychosocial factors and neurophysiological factors of nociception, transmission, perception and processing of afferences are thought to be relevant [12, 16-18]. It was found to be necessary to introduce a model to integrate all these different factors in order to explain, diagnose and treat CMPS effectively. In our opinion the functional system of behavior from Anokhin [19] might be a good model to comprehend the complexity of CMPS.

Human behavior is hedonistic; hence the main aim is the satisfaction of elementary needs, such as communication, alimentation and reproduction [20-22]. The locomotor system plays an important role for the satisfaction of these needs. Depending on the motivation, the sensory input and potential targets for a motoric action (Figure 1) [19]:

the motoric program will be rectified and the process starts again (Figure 1). Today the afference acceptor is thought as a neuronal network [23]. The functional system of behavior contains all elements thought to be relevant for CMPS (pathomorphological factors, somatic dysfunction, psychosocial factors, neurophysiological changes of nociception, transmission, perception and processing of afferences). In our further discussion, we will concentrate on these different elements. 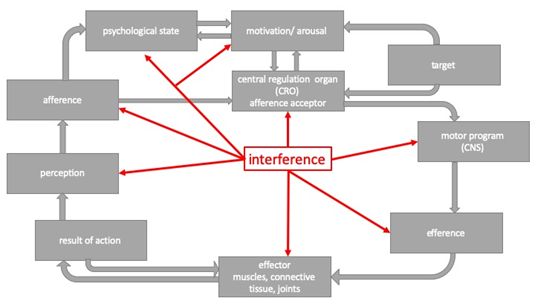 Figure 1: Model of the functional system and potential interference, adapted [20].

The functional system is, as all physiological systems, not static but is constantly adapting to the needs and demands. Adpantability is therefore one of the main features of a functional system like the human body. If a functional system is not able to adapt, disease will develop [24]. Pathomorphological changes, psychosocial influences and somatic dysfunction are very common findings even in symptom free people.

Usually these findings are compensated within the functional system. If the adaptability does not suffice, or if the demands are to high, the system will decompensate, hence symptoms will develop. Reduced adaptability can result from all discussed elements of the functional system, or from other systems (e.g. cardio-pulmonary insufficiency). If treatment is successful, the system can regain balance, hence re-compensate. Prevention and

rehabilitation should focus on the adapatibility of the system and try to reduce negative influences like e.g. muscle weakness, poor coordination, poor psychological state etc., If the system can´t re-compensate chronic disease like CMPS develop. The treatment should reduce disturbances on the different influencing factors (see below) and improve adaptability.

4. Factors Responcible for the Development of CMPS

Degenerative changes are very common in patients with CMPS, but also in healthy subjects [25, 26]. Nevertheless, diagnosing and treating degenerative changes (e.g. medication, injections, operations) seems to be the main focus of medicine, at least in western countries [27-29]. While treating pathomorphological factors can be quite successful (e.g. hip replacement in hip arthritis, anti-inflammatory drugs in rheumatoid disease), it fails to show sustainable effects in chronic LBP and other CMPS. Furthermore, it is quite typical for CMPS to show at least initially intermittent rather than constant pain, while the degenerative changes remain stable. We would argue, that structureas a central role for normal function of the locomotor system. Structural changes influence the functional system and results in compensation mechanisms within the system. But we would also like to stress the known fact, that function determins structure. Poor function leads to poor structure as seen in many patients with CMPS, e.g. muscle wasting and osteoporosis due to inactivity. In order to evaluate the role of pathomorphological factors we would suggest dividing them according to the following scheme [30]:

Usually pathomorphological changes can be compensated within the functional system, hence adaptation of neuromodulation, motor control, psychosocial mechanisms etc. If compensation does not suffice, treatment might be necessary to improve the ability to adapt to the structural pathology and/or treat the structural pathology directly (e.g. hip replacement, surgical spine stabilization)

Function is the normal expression of life. The functional system of behavior includes all parts of normal function [31]:

Therefore, dysfunction can be described on different levels. The international classification of function [32] describes psychosocial functioning, hence the interaction within society (participation). Sports medicine, rehabilitation etc. focus on function like walking, sitting, grip etc. as basis for a good participation. Physiotherapy, manual medicine and osteopathy diagnose and treat somatic dysfunction of structures (e.g. fascia, muscles, joints). Furthermore, pharmaceutical and physical methods influence biochemical/metabolic processes within and between cells. These different the levels are obviously connected, interact and are able to compensate dysfunction or pathomorphological changes. If the capacity for compensation is exceeded, dysfunctions become symptomatic. Typical symptoms are pain, impaired function (e.g. walking, sitting) and participation. If the dysfunctions are the central pathogenetic factor, we would suggest the term functional disorder (Figure: 3, [31]). Somatic dysfunctions are caused by a discrepancy between the loading of structureits endurance, hence the capacity to meet the actual demands. If the loading exceeds the endurance, dysfunctions or structural damages develop [31]. Frequent causes for a discrepancy between loading and endurance are:

Even a short nociceptive input can lead to changes in motor control and therefore lead to a vicious circle (Figure 2) [32-34].

Figure 2: Model for the interaction of somatic dysfunction and development of a vicious circle sustaining functional disorder. 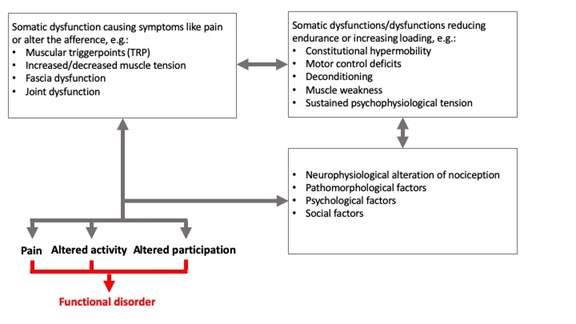 Figure 3: Model; Interaction of somatic dysfunction and other factors in the development of a functional disorder [31].

For systematic reasons we would suggest dividing somatic dysfunction into two categories [30, 31].

If not compensated, the interaction of these somatic dysfunctions and other factors lead to the suggested functional disorder (Figure 3) [4, 31, 35]. For patients with CMPS the role of somatic dysfunction for the disease should be assessed and be treated accordingly. It is important to include the different levels of function into the assessment.

As with pathomorphological factors, it is important not only to describe psychosocial factors, but to evaluate the influence on the disease for each individual patient.

It is well known, that neurophysiological changes of neuromodulation taking place early in the development of CMPS. Functional and structural changes have been demonstrated in the peripheral as well as in the central nerve system (PNS, CNS; [43-49]). It was postulated, that chronic pain may become independent from nociceptive afferences. While some pain syndromes are completely generated by the CNS (e.g. phantom pain), so far it is not possible to proof the existence of completely centrally generated CMPS.

Three different stages in the development of chronic pain have been postulated [50].While the first 2 stages are dependent from nociceptive input, stage 3 characterize a centrally produced pain independent from any nociceptive input (Figure 4). Clinically and neurophysiologically it is possible dividing the first two stages, stage 3 remains a hypothesis. In our view, it is rather unlikely to have a completely centrally generated CMPS. In the model of the functional system, changes in the PNS and CNS result from the altered sensory input including but not solely nociception. Functional and (reversible) structural alterations will not only affect the nociceptive system, but also the whole functional system including the sensorimotor system, behavior etc. 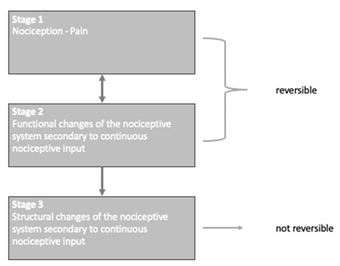 On the basis of the model of the functional system, we would propose to develop a system to subgroup patients. The 4 described elements considered relevant for the development of CMPS ought to b included in the subgrouping prozess (Figure 5), [17. 51].

The clinical and scientific focus should be shifted from simple one dimensional to a multidimensional view. The binding element within the whole system is the function on all levels. The different factors should be assessed for each individual patient. In order to obtain reliable and valid results. A standardized assessment system should be developed and scientifically evaluated. Attempts on such assessement systems have been made for tertiary medical care, but further development and research is required [51, 52].

On the basis of the subgroups, treatment can be targeted at patients with CMPS and research results for treatment methods become comparable. Furthermore, many patients present in daily practice with acute pain. Taking the history accurately, it reveals often one or more episodes of recurrent pain. In an acute episode, usually a triggering factor can be found, but underlying factors within the whole functional system are often overlooked. An early assessment and treatment of all elements might help to prevent the development of CMPS. 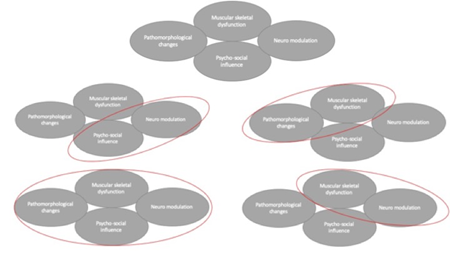 Figure 5: Elements of the development of CMPS and examples for possible subgroups.

CMPS are multifactorial syndromes. The actual division in specific and nonspecific pain syndromes has not proven valuable. In our view it is important to move the function into center of attention. Function, from the cellular to the complex psychosocial functioning is the expression of life. Dysfunction and structural changes can be compensated by functional adaptation. If adaptation does not suffice disease develops. Improving function on all levels is central for prevention, rehabilitation and treating CMPS. On the basis of the model of the functional system of behavior and the main pathophysiological elements of CMPS, subgrouping of patients seems neccessary. For this, a standardized assessment procedure should be developed and introduced after scientific evaluation. On the basis of a valid assessment

An example for effective subgrouping for scientific research and clinical practice are the Criteria of the American College of Rheumatology for rheumatic diseases [52]. Therefore, further research should focus on subgrouping CMPS and its validation.