Before the advent of computed tomography, occipital condyle injuries were solely a postmortem diagnosis. Nowadays, CT is well established in the diagnostic workflow of trauma management, allowing accurate planning and proper treatment. Anderson and Montesano as well Tuli developed radiologic classifications, each based on a small number of cases, in regards to the stability of the lesion and also provided treatment recommendations. In this case study we present a 24-year-old man suffering massive trauma to the head and thorax from a agricultural vehicle accident, leading to a displaced avulsion fracture of the right occipital condyle with high atlanto-occipital instability (Anderson Montesano type III). However, the patient did not develop any neurological deficit. Within the scope of the damage control polytrauma algorithm, the atlanto-occipital instability was initially stabilized in a HALO fixator. For devinitive treatment, we decided on an internal occipito-cervical fixation with a permanent fusion of the injured C0/C1-segment without reduction of the dislocated fragment at a time 14 days after the accident. The fixation construct spanned from the occiput to C3 in order to achieve a high primary stability. At 3-months follow-up, CT scans showed bony healing of the right condyle in an unchanged displaced position and a successful posterior fusion of C0/C1. After one year, a complete implant removal was done.

While cleaning a manure spreader a 24-year-old man suffered a massive compression trauma of the neck and upper chest when one of the vehicle’s sprayer arms shifted with a force of approximately one ton (Figure 1). He was freed from the vehicle with the help of colleagues and heavy machinery. His initial GCS was 15 points. He complained of pain in the upper cervical spine, chest and shoulder girdle. After first aid and immobilisation in a stiffnek and vacuum mattress the patient was transported via rescue helicopter into our Level-I trauma center. He arrived at the emergency room in a stable cardiopulmonary condition with retrograde amnesia to the accident, nausea and headache, but normal neurological status. Polytrauma CT scans detected a displaced fracture of the right occipital condyle close to the spinal cord (Figures 2 a, b, c), a type III injury according to Anderson and Montesano [1-5]. Additionally, he suffered from a peri-mesencephalic subarachnoid hemorrhage branching out to the ventricle system, a non-dislocated fracture of the right petros bone, a thoracic trauma with a serial rib fracture as well as a small pneumothorax, fractures of the transverse process of the 3rd and 4th thoracic vertebra as well as fractures to the right coracoid and the left scapula. His total Injury Severity Score (ISS) amounted to 25 points. To determine the dimensions of the occiput condyle injury, we subsequently performed CT-angiography. Imaging revealed direct contact of the medially-rotated and dislocated right occipital condyle to the V4-segment of the vertebral artery, but no compromising of the vessel (Figures 3 a, b). 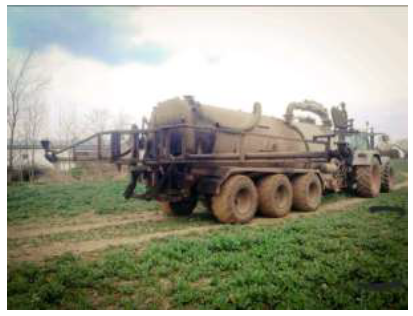 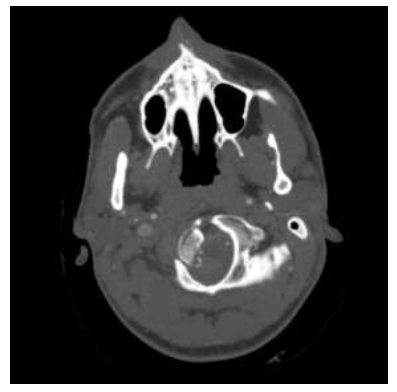 Figure 2a: Polytrauma CT scans showing the displaced fracture of the right occipital condyle (type III according to Anderson and Montesano). 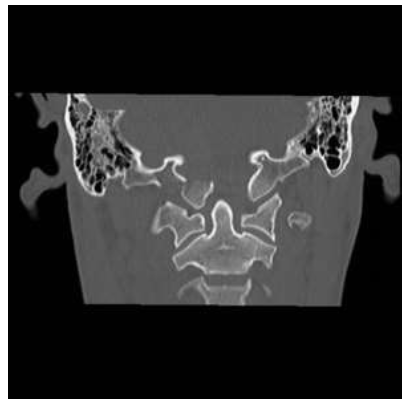 Figure 2b: Polytrauma CT scans showing the displaced fracture of the right occipital condyle (type III according to Anderson and Montesano 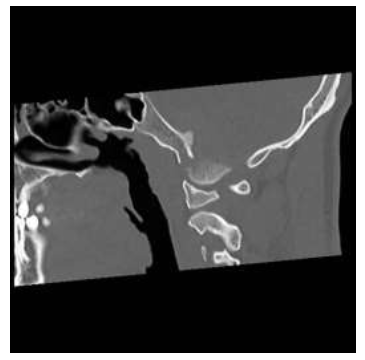 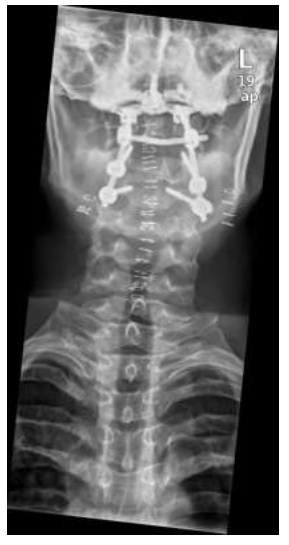 Figure 3a: Postoperative X-rays of the cervical spine in (a) a.p. projection. 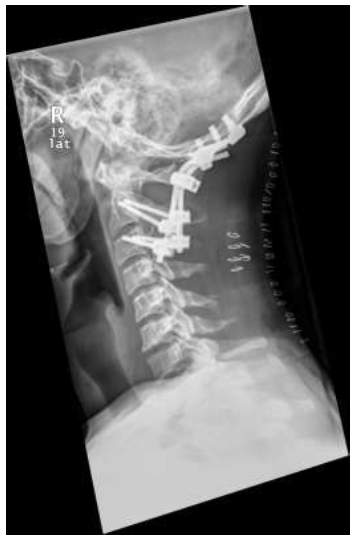 Figure 3b: Postoperative X-rays of the cervical spine in (b) lateral projection.

To further stabilize the highly unstable C0 injury a HALO fixator was applied at the same day. In the following hours the patient’s status deteriorated rapidly showing vomiting and increasing disorientation. A subsequent cranial CT scan showed an extension of the cerebral haemorrhage, particularly in the 4th ventricle and around the foramen magnum. The patient’s status improved after trepanation, installation of intracerebral pressure pressure tube and ventricle drainage.

Four days later the ventricle drainage could be removed. Five days after the accident the patient could be transferred from the ICU to our trauma ward.

We discussed the surgical treatment options in respect of expected functional outcome, potential peri-operative risk and patient’s volition. Therefore, three strategies came into consideration: A definitive fracture treatment with the HALO fixation for 8 to 10 weeks represented the option with the lowest iatrogenic risk. However, the wearing comfort is lousy. An occipito-cervical fusion (OCF) with additional bone grafting would be associated with a reasonable surgical invasion, but dismissing CO/C1 movement. Open reduction and internal screw fixation of the dislocated condyle fragment using the suboccipital approach with C1 hemilaminectomy and foraminatomy of the foramen magnum would promise a nearly complete functional restitution. However, this procedure is associated with a high risk of iatrogenic lesion of neurovascular structures.

The patient did not want the dislocated fracture to be reduced and decided for occipito-cervical fusion, despite of substancial functional loss of the occipito-axial and the atlanto-axial joints. Two weeks after the accident we performed surgery, using the dorsolateral, suboccipital transcondylar approach [6] and transfixing from the occiput to C3 vertebra (Mountaineer® OCT spinal system, Depuy-Synthes, Raynham, MA, USA) with apposition of bonegraft substitute (Actifuse®, Baxter Healthcare Corporation, Deerfield, IL, USA) C0/C2 fusion under 3D visualisation using the O-arm (Figures 4 a, b).

The injuries to the thorax, shoulder girdle and thoracic vertebrae where treated conservatively. 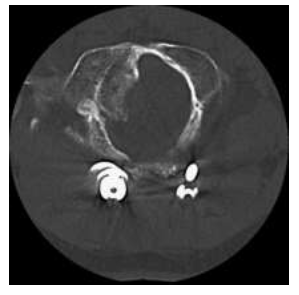 Figure 4a: Postoperative CT scans in (a) coronal reconstruction. 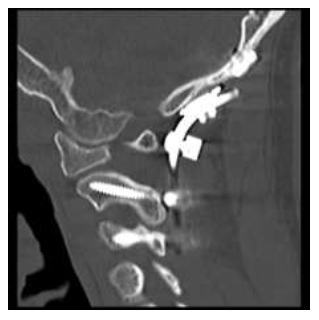 Figure 4b: Postoperative CT scans in (b) sagittal reconstruction.

No intra- or postoperative complications occurred (Figures 5 a, b, c). Following surgery the cervical spine was immobilized in a soft collar for 6 weeks. Nine days after surgery the patient was released from the hospital in stable condition with a regular neurological status. We conducted a 12-week follow-up including clinical and radiographic examination. At this time CT scans showed an assimilation of the right occipital condyle in unchanged dislocation. In the following time he underwent intensive physiotherapy for muscle strengthening and motion improvement. One year after the accident we performed full implant removal, as planned to release the C2/3 segment. At last outpatient consultation the patient exhibited a limited range of motion, as expected, but did not complain of pain in the cervical spine or neurological deficits.

Figure 5a: Functional outcome of the cervical spine 14 months after trauma in side tilting.

Figure 5b: Functional outcome of the cervical spine 14 months after trauma in (b) rotation.

4. Rational for Treatment and Review of the Literature

In the past, occipital condyle fractures were solely a postmortem diagnosis. Due to improved radiographic diagnosis techniques [2, 7], especially the modern widespread use of CT, outcomes have improved. Estimates of this injury’s incidence have a wide spread in the relevant literature. Aulino et. al identified an OCF in 0.65% of trauma admissions [2], Hanson et. al estimated the incidence at approximately 0.1% of patients [3], Maserati et al. calculated an incidence of 0,4% in their examined population [7] and the data of Mueller et al. indicates a 1% incidence [9].

In a large autopsy series of head trauma victims, OCF occured in 0.6% up to 4% of cases [10]. All authors agree that the mechanism leading to an OCF usually includes high impact cranial trauma [2, 3, 7, 11, 12] and occurs in association with muliple additional injuries. The paired occipital condyles and first two cervical vertebrae should be considered as a functional unit [3, 13]. The occipital condyles are prominences on the paired lateral exooccipital segments of the occipital bone on the anterior half of the foramen magnum [14, 15]. The condyles articulate with the lateral masses of C1 and are attached to C1/C2 by a number of ligaments [1, 14, 15]. The most important ligaments are the tectorial membrane and bilateral alar ligaments. They are the main limiting factor for axial rotation and, to a lesser degree, lateral flexion and anteroposterior rotation. The tectorial membrane is a continuation of the odontoid’s posterior face to the ventral surface of the foramen magnum. Its main function is to limit the extension of the atlantooccipital joints [2, 3, 15].

An injury to the occipitoatlantoaxial joint complex may lead to severe instability. Due to the complex anatomic relationship, an OCF in particular can cause lesions to the hypoglossal canal, jugular foramen, vascular structures and medulla oblongata [15, 16, 17]. The jugular canal sits just lateral to the hypoglossal canal and occipital condyles (approx. 1 cm). Through this canal pass the cranial nerves IX-XI, Jacobson's and Arnold's nerve, the inferior petrosal sinus, the internal jugular vein and the posterior meningeal artery.

The medulla oblongata, meninges, vertebral arteries, and the anterior and posterior spinal arteries and veins pass through the foramen magnum [12, 15].

An injury of the occipital condyles is difficult to detect clinically, as most patients are not accessable to full examination due to concomitant head injuries. Alert patients might present upper cervical spine tenderness or neurological deficits such as lower cranial nerve palsies. Nearly one third of the patients (up to 80% in some case series) with an OCF suffer neurological symptoms. Within this group, another third present delayed deficits which might occur days or even weeks after the accident [11-14, 18, 19].

Demisch et al. report a case about a 45-year-old woman with a fracture of the right occipital condyle who showed no initial neurological symptoms but later developed hypoglossal nerve palsy 9 weeks after the incident, most likely caused by compression of the hypoglossus canal due to callus formation or subseqent dislocation of a bony fragment [20]. Unilateral paralysis of the cranial nerves IX through XII is referred to as the "Collet-Sicard-Syndrome" [16, 17, 19].

A CT scan of the cervicooccipital junction is necessary for reliable diagnosis. Plain radiographs of this region typically appear normal, although sometimes prevertebral soft tissue swelling and asymmetry of the odontoid peg may provide indications of injury [9, 13]. An MRI may be useful for determining the extent of soft tissue involvement, although it is of secondary importance [2, 5, 21].

In our case the patient complained of intense pain in the upper cervical spine with no neurological limitations. Due to the trauma mechanism, we performed a CT scan from head to pelvis which revealed the displaced fracture of the right occipital condyle. Despite the dislocation into the foramen magnum, the lack of neurological symptoms might be explained by the anatomy of the craniocervical junction, which extends wider than the lower cervical spinal canal [15]. The occipital condyle fractures are commonly classified after Anderson and Montesano [22]. A Type-I fracture results from axial loading causing a comminuted condylar fracture with little or no displacement.

Type-II describes a condylar fracture with extension into the base of the skull, Type-III is classified by the avulsion of a condyle at the alar ligament, resulting in an unstable fracture. Tuli et al. introduced an alternative management-based categorization system: Type-I is a non-displaced (i.e. stable) OCF with the ligaments still intact; Type-IIa is a displaced OCF with intact ligaments (stable) and Type-IIb describes displaced OCFs with radiological signs of ligament injury that are therefore unstable [23].

In general the treatment of OCF is conservative [3, 8, 11, 23, 24], using a hard collar or HALO vest for 6 to 12 weeks. Only the few patients who presented neurological symptoms, displaced fractures or additional fractures of the upper cervical spine underwent an operative internal fixation procedure [8, 24].

However, there are also cases reported where conservative treatment was preferred despite neurological symptoms [16, 17, 19, 20]. We discussed further treatment options after HALO stabilization and were mindful of the inherent risks of surgery.

After consultation of experts in the field and in accordance with the patient’s wishes we decided on an operative internal stabilization with fusion of C0/C1 and no repositioning of the displaced condyle (Option 3).

Our reasons for this course of action where manifold: