Tibial Spine Fracture Type I in a 6 Years Old Patient: Complications and Treatment

A tibial spine fracture is bony avulsion of the anterior cruciate ligament (ACL) from its insertion on the intercondylar eminence. It was first described by Antonin Poncet in 1875. It occur most commonly in skeletally immature patients between the ages of 8 and 14 years [1] with a higher proportion of males (69%) compared with females (31%) [2]. It represents 2% to 5% of knee injuries with effusion in the pediatric population [3] and 14% of ACL injuries [4]. The incidence of 3 per 100,000 children per year [5]. The mechanism of injury is similar to that of ACL rupture [1]. Bone breaks before ligament rupture due to incomplete ossification of the tibial eminence.

A tibial spine fracture is bony avulsion of the anterior cruciate ligament (ACL) from its insertion on the intercondylar eminence. It was first described by Antonin Poncet in 1875. It occur most commonly in skeletally immature patients between the ages of 8 and 14 years [1] with a higher proportion of males (69%) compared with females (31%) [2]. It represents 2% to 5% of knee injuries with effusion in the pediatric population [3] and 14% of ACL injuries [4]. The incidence of 3 per 100,000 children per year [5]. The mechanism of injury is similar to that of ACL rupture [1]. Bone breaks before ligament rupture due to incomplete ossification of the tibial eminence [1]. ACL avulsion fractures may vary considerably in size of the fragment, depth of the fracture into the tibial plateau, degree of displacement, and amount of comminution [6]. The most commonly used classification is Meyers and McKeever (1959): (Figure1). It is based on four fracture patterns that depending on t the degree of displacement and the comminution. A type I fracture is the least severe, with a non-displaced or minimally displaced anterior margin and excellent bony apposition. In a type II fracture, the anterior 1/3 to 1/2 of the fragment is displaced, with an intact posterior hinge. Type III fractures are classified in 2 subcategories. Type IIIA avulsion fractures have complete separation of the fragment from the bony bed without apposition, and type IIIB fractures are completely displaced and rotated cephalad [7]. Zaricznyj in 1977described type IV fractures, which represent comminution of the fragment [8]. Associated injuries occur in 40 % of the time including meniscal tears, collateral ligament tears, capsular tears, and osteochondral fragment injuries[1].There is a high rate of entrapment of the anterior meniscal horn or the intermeniscal ligament with this type of fracture as both lateral and medial meniscal anterior horn are inserted on the tibial spine. According to Kocher et al., entrapment of the anterior horn of the meniscus or intermeniscal ligament is seen in 26% of type II fractures and 65% of type III fractures [9]. The risk of meniscal tear depends on the type of lesion but are much more frequent in type II or type III fracture. 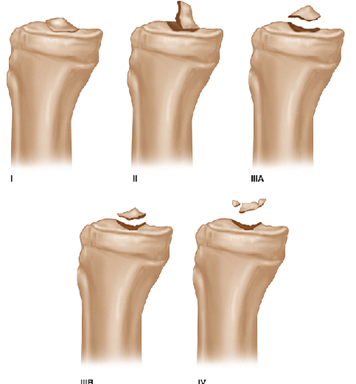 A 6 year old girl was admitted at the ED of Randers Regional Hospital in Denmark, after she twisted her left knee jumping in a bouncy castle the previous day. She had heavy pain with the slightest movement and could not walk. Clinical examination was limited because of pain but the attending physician foundswelling, and a restricted range of motion (flexed knee at 30 degrees) but no sign of neurovascular injuries. Conventional knee X-ray (Figure 2) of the left knee showed a knee effusion and suspicion of tibial spine avulsion. A CAT scan (Figure 3) confirmed the fracture and it was classified as a type I according to Meyer and Mc Keever classification. The orthopedic surgeon on call in the ED chose a standard non operative treatment.

The left knee was immobilized with a long cast in 30 degrees of flexion for 12 days and a non-bearing regime. After 12 days the cast was removed and the X-rays showed unchanged non displaced fracture. The left knee was then immobilized with a knee brace in 30 degrees of flexion with still no weight bearing in 3 more weeks. After almost 5 weeks a new X-rays (Figure 4) showed no secondary displacement and sign of bone healing. The ROM was set to 0-90 degrees and the patient was allowed weight bearing but had to use the brace 2 more weeks.

Three months later the patient was referred to the orthopedic outpatient clinic as she was still complaining of pain and had experienced swelling and blushing of the left knee. The clinical examination found no swelling, normal color of the skin, no effusion, no instability of the knee and normal ROM. Lachman test was negative but provoked knee crepitus. An MRI (Figure 5) was performed and described with a subchondral cystic formation. The MRI was assessed by a ortopedic specialist in sport traumatology and was found with no sign of cyst or cartilage damage. The patient was referred to physiotherapist. In the mean time she still complained of knee pain and swelling.

Eigth months later the patient was referred again to the orthopedic outpatient clinic because of continuous anterior knee pain. The lastest X-rays was re-evaluated and a slight elevation of the anterior part of the intercondylareminence was noticed. Clinical examination of the left knee showed normal ROM, no instability, no swelling nor effusion, Mc Murray test was negative. Palpation of the patella tendon induced pain. Because of the discrepans on the X-ray and the persistant pain, a knee arthroscopy was performed. It demonstrated an entrapment of the anterior horn of the medial meniscus as well as the intermeniscal ligament and as a consequence a non-healing of the anteromedial part of the fracture (Figure 6).

The intermeniscal ligament was removed from the fracture, the fracture was debrided and the subchondral bone stimulated with micro fracture. The fracture was then reduced and fixated with two smartnails (20 and 16 mm) (Conmed) (Figure 7).

The patient had a non-weight bearing regime for three weeks. After three weeks the patient had no pain at walking, the ROM was 0-115 degrees and no instability of the knee was found. New X-ray showed a healed the fracture (Figure 8). The patient was referred to a physiotherapist. Four months after surgery, the patient was seen in our outpatient clinic and has no pain, no complains she was participating every sports activity she used to prior to the injury. Examination of the knee demonstrate a normal ROM, no instability of the knee with a negative Lachman test, no pain with palpation of the joint line and negative Mc Murrays and Apleys test. 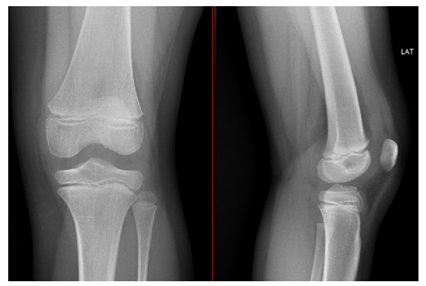 Figure 2: Conventional X-rays at the time of the injury. 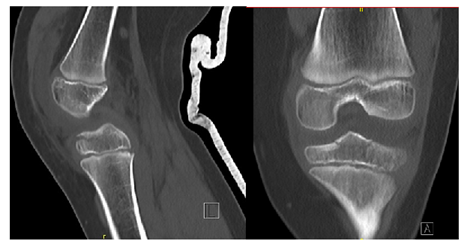 Figure 3: CAT scanning at the time of the injury. 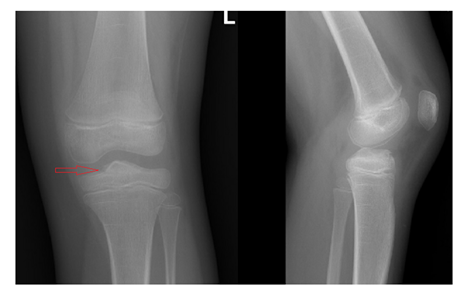 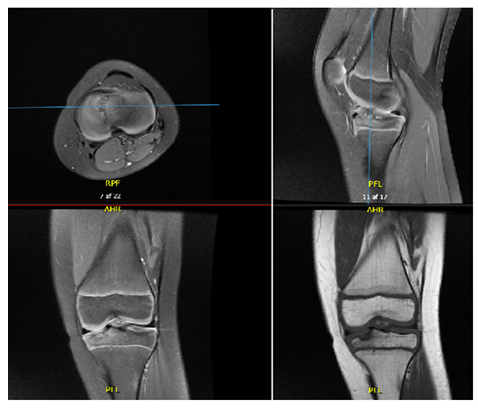 Figure 5: MRI 3 months after the injury.

Figure 6: Arthroscopic view of the fracture and the entrapment of the anterior horn the medial meniscus 8 months after the injury.

Figure 7: Arthroscopic view of the fracture after reduction and fixation with 2 smartnails. 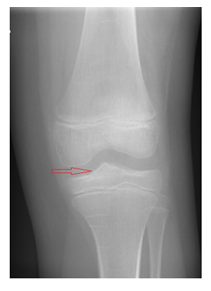 The incidence and the cause of nonunion after a tibial spine avulsion is not sufficiently explained or described in the literature but it is quite rare especially in the type I fractures. Interposition of the intermeniscal ligament or the meniscal anterior horn can be a cause of nonunion despite a sufficient reduction of the fracture [19]. The diagnosis is often delayed resulting in delayed treatment, up til 12 months after the injury (in range 3 to 312 months; mean 45.3 months) [17] (1 to 8 years, with a mean of 3.6 years) (18). The main symptoms are a deficit of knee extension [19] or isolated persistent anterior knee (in extension) pain, as it wasin our case.

Diagnosis of a non-union fracture of the tibial spine is based on plain X-rays, CAT and MRI. MRI is a non-invasive and non-irradiating examination and is superior to CAT as it allows identification of an interposition of the intermeniscal (Figure 9) ligament or the meniscus. Many radiologists do not specifically look for sign of entrapment unless asked. It is therefore important that the clinician specifies this concern to the radiologist. Although soft tissue entrapment is quite rare in type 1 fracture, it is crucial to diagnose it early on MRI, in order to avoid non-union that can have large consequences for a patient as persistent knee pain, loss of ROM and reduction of physical activity.  MRI should always be perform in case of tibial spine fracture. In type I fracture the recommended treatment is conservative.  In type I fracture MRI allowed to diagnose the rare cases of entrapment that require a surgical treatment.

The treatment of non-union of tibial spine fracture requires debridement of the scaring tissue, removal of entrapped ligament or meniscus, reduction and fixation of the fracture [20]. There are no consensuses on the type of fixation (screws, suture, nails…) [21-23]. In our case only the medial part of the tibial eminence was not healed due to the interposition of anterior horn of the medial meniscus. Considering the good stability of ACL and the very young age of the patient, we chose to fixate the fracture with smartnails in order to respect the epiphyseal plate and also avoid the necessity of removing the fixation device.

It still allowed an early mobilization of the knee which is quite important as stiffness or a decrease ROM is the most frequent complication after tibial spine fracture fixation [24]. This type of fixation is not commonly used for tibial eminence avulsion as it might be not as strong as screws or sutures [21-23], but in the case of type 1 fracture with entrapment of the intermeniscal ligament or slightly displaced type 2 fracture it can be considered as good option in children. 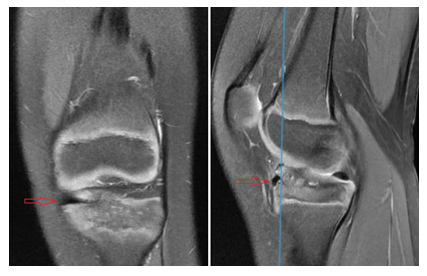 Figure 9: MRI showing the entrapment of medial meniscus in the fracture.

In case of a type1 or slightly displaced type 2 fracture where a conservative treatment regime is recommended, an MRI should always be performed in order to identify patients with intermeniscal ligament or meniscus entrapment as these patients required a surgical arthroscopic treatment.

In our cases the patient was treated arthroscopicly,  by debridement and fixation of the fracture with a small device as smartnails that safe for epiphyseal plateand does not requires secondary removal.