Cyclops lesions had been commonly reported after anterior cruciate ligament reconstructive surgeries due to many causes, mostly ACL graft tear or impingements, but the incidence of development of such lesions in non-operated knees of the native ACL, is not clearly described in the literature, this case study presents a Cyclops lesion after partial tear of anterior cruciate ligament in non-operated knee, causing loss of full knee extension with giving way.

Cyclops lesion, also known as localized anterior arthrofibrosis, was first described by Jackson and Schaefer [1]. It is a fibrous nodule of granulation tissue that is located anteriorly along the graft after an Anterior Cruciate Ligament Reconstruction (ACLR). A cyclops lesion with loss of extension of the knee with or without an audible or palpable clunk in terminal extension constitutes the cyclops syndrome. The incidence of cyclops syndrome has been reported to be between 1% and 10% of all ACLRs, whereas Magnetic Resonance Imaging (MRI) studies have reported an incidence of 25% to 47% for cyclops lesions. The incidence of all types of cyclops progressively increases with time. It was described clearly in the literature after ACLR surgeries but on the other hand not clearly reported in non- operated knees especially after partial tear of the ACL. The purpose of this report is to highlight the existence of cyclops lesions in non-operated knees after partial anterior cruciate ligament tears.

Cyclops lesions are not commonly described in the literature to develop in non- operated knees that originate from the native ACL as consequence of its partial tear. The cyclops lesion is a pedunculated or nonpedunculated nodule of fibrovascular tissue. The arthroscopic appearance with its overlying blood vessels gives the appearance of a “cyclops”. The most common site is the anterolateral aspect of the tibial insertion site of the ACL graft [1]. With a high incidence of ACL tears

(250,000 per year in the United States [2]), an incidence of 1% to 10% for cyclops lesions after ACLR can mean a huge burden to health care. However, no large series of cyclops lesions have been reported in the literature. It may be assumed that a large number of cyclops or cyclopoid lesions are asymptomatic and undiagnosed or that the incidence is declining because of improvements in ACLR techniques [2]. In typical cyclops lesions after partial ACL tears, the nodule will be found adherent to the anterolateral part of the ACL [3].

Inverted cyclops lesion has been described as a fibrous nodule arising from the femoral notch instead of the tibia. Only 5 reports 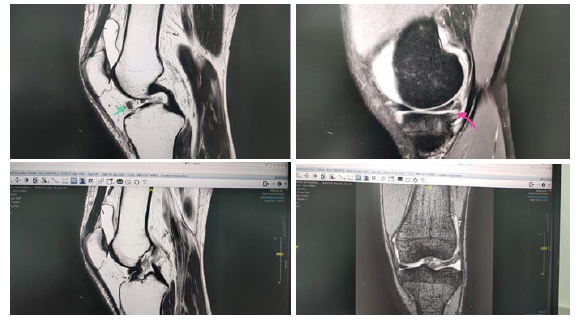 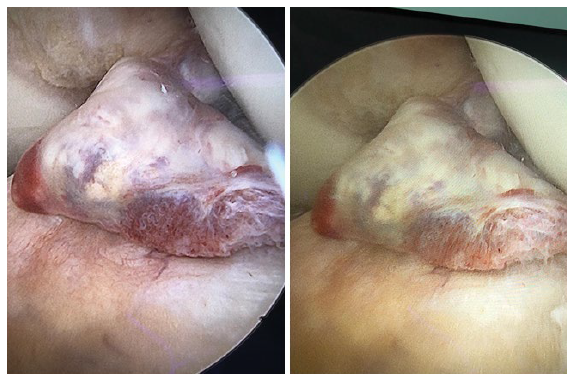 Figure 3: Arthroscopic photos showing the origin of the cyclops lesion from the native ACL (almost the torn PL bundle). 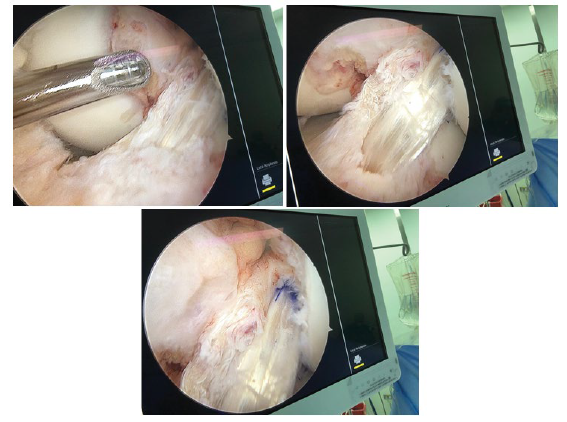 Figure 4: Showing, augmentation of the ACL after removal of the cyclops lesion (reconstruction of the PL bundle). 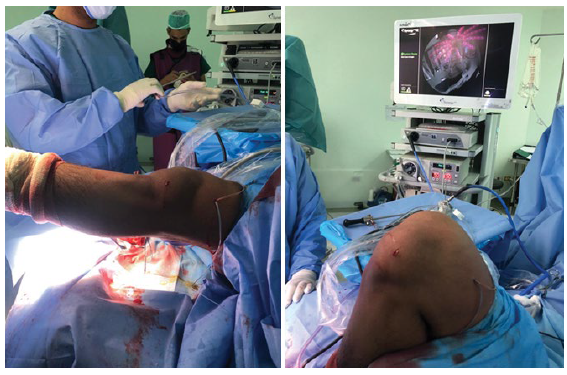 Figure 5: Showing intraoperative photos with full range of motion, at the end of the arthroscopic procedure. 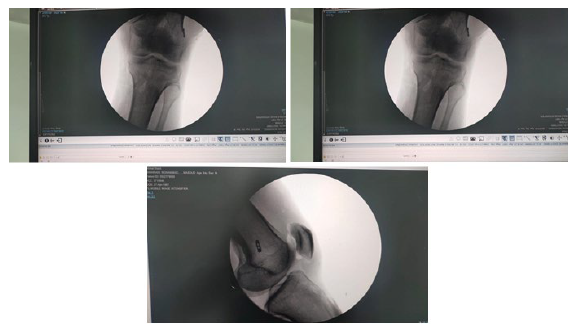 Figure 6: Showing post op X-rays demonstrating ACL tunnels with tightrope femoral fixation. of this lesion have been published, and it has been associated with T-shaped intercondylar fracture of the femur [4], autologous ACLR using Bone–Patellar Tendon–Bone (BPTB) graft [5], 4-strand hamstring grafts, or has occurred after supracondylar nailing of the femur [6,7]. The lesion may have a stalk leading to the femoral tunnel [5] or may occur without any connection to the femoral tunnel [7].

Cyclopoid lesions were first described by Muellner et al. [8] as fibroproliferative nodules without cartilage or bone and hence softer than the classic cyclops lesion. Because cyclopoid lesions are soft, they do not restrict terminal extension, may be asymptomatic, and are detected only as incidental findings on MRI scans or during arthroscopy. If flexion is also restricted in patients, the cyclopoid lesion probably represents a general tendency toward fibrotic healing and is not due to evolution into a true Cyclops [8]. Pseudocyclops lesions mimic cyclops lesions clinically and sometimes on imaging but do not have pathological features of cyclops. These are very rare lesions. Cyclops-like presentation has other causes. Gouty tophus has been reported as a cause of loss of extension and cyclops-like appearance during arthroscopy [9]. And the most common location is the infrapatellar fat pad region [9]. Other potential causes include space-occupying lesions, such as ganglia and pigmented villonodular synovitis, but these have not been reported in the setting of trauma to the knee or ACLR and hence may be incidental occurrences. They can be differentiated according to their typical histological features [10]. Cyclops lesion has been reported with both complete tear and partial tears of the native ACL. The cause of the nodule in ACL ruptures was thought to be avulsion of pieces of bone from the tibial attachment site of the ACL [11].

Cyclops lesion has also been reported after partial avulsion of small bone pieces from proximal attachment on the femur [12]. Persistent loss of knee extension for more than 2 months even after aggressive rehabilitation after ACL rupture should raise suspicion of a cyclops lesion [13]. Microtrauma was thought to lead to granulation tissue, which leads to formation of the nodule creating the cyclops [14]. No difference has been noted in the location, histologic features, or amount of loss of extension between cyclops lesion after rupture of the native ACL and that after ACLR [13]. Cyclops lesion has been reported with different types of ACL grafts and repair and reconstruction methods [15].

Grinding with attempted extension beyond a patient’s limit, joint line pain and tenderness, locking of the knee, and discomfort with climbing stairs [21]. Tonin et al. [22] reported good results after excision of the lesion if ne within 12 weeks of presentation and did not report any recurrence after successful surgical excision, although recurrence is common for the other causes of loss of knee extension [22].

We are presenting male 37 years with history of twisting injury 6 months ago, no history of surgery before, who complained of left knee pain giving way and loss of full extension (extension lag 20°). On clinical examination, wasted left quadriceps muscle with loss of active last 20° of extension, positive anterior drawer and Lachman tests with endpoints, and tender medial joint line. MRI showed partial tear of the native ACL mostly the PL bundle, grade 3 tear of the posterior horn of the medial meniscus. Through diagnostic arthroscopy was done that confirmed the presentation of a hypervascular Cyclops lesion and confirmed its origin to be the PL bundle of the native ACL. Histopathological examination was done for this hyper vascular lesion to exclude other causes of Cyclops lesions (i.e., PVN). Complete arthroscopic shaving of the lesion with reconstruction of the PL bundle of the ACL with preservation of the intact AM bundle. Full extension was obtained intraoperative and after PL bundle reconstruction.

Cyclops lesion is a common complication after ACLR. But it can develop in non-operated knees as sequelae of partial tear of the native ACL, It is important to distinguish between a cyclops lesion and cyclops syndrome because management is needed only for the symptomatic lesion. Confirmatory diagnosis is made using MRI, and surgical excision is the management of choice for symptomatic lesions followed by ACL reconstruction or augmentation. Outcomes after excision are very good, and lesions almost never recur after excision.