Foot and Ankle Medicine: Analysis of a Decade of Research in Renowned Brazilian Orthopedic Journals

Evidence-based medicine is a new paradigm for medical practice in situations that generate uncertainties regarding disease diagnosis, prognosis, and therapeutic management, requiring professionals to develop expertise in the critical evaluation and validation of scientific publications. Thus, this study aimed to evaluate the articles published in Brazil between 2010 and 2019 on foot and ankle medicine. Three researchers independently searched for articles on foot and ankle medicine in three renowned Brazilian orthopedic journals, as follows: Revista Brasileira de Ortopedia, Acta Ortopédica Brasileira, and Revista Abtpé. In total, 296 articles were identified and complied with the inclusion criteria, being thus analyzed. Applying the Oxford hierarchy of evidence classification, we found that, across the three journals, most articles were at levels 4 and 5 of evidence and originated in the state of São Paulo. The most discussed topics were trauma, hallux valgus, pathologies of the calcaneus tendon, and ligament injuries. Given that the predominance of articles with a lower level of evidence has also been reported in the literature for international journals, initiatives that encourage an increase in the number, in the popularization, and the improvement of the level of evidence for foot and ankle medicine research in Brazil are warranted.

Evidence-based medicine is a new paradigm for medical practice, especially in situations that generate uncertainties regarding disease diagnosis, prognosis, and therapeutic management; this approach requires professionals to develop expertise in the critical evaluation and validation of scientific publications [1]. Specifically, evidence-based medicine differs from traditional medicine in that it is not guided by intuition nor by pathophysiological reasoning, both of which relate to clinicians’ decision-making; instead, it is based on literature research and clinical evidence evaluations, thereby requiring the development of new skills for most doctors.

Moreover, owing to the large increase in the number of scientific publications and search tools and to help avoid methodological pitfalls-that can lead readers to misleading and dangerous decisions in clinical practice—evaluating these studies requires critical appraisal [2]. Although the practice of medicine has been based on empirical knowledge since at least the time of Galen of Pergamon, the term evidence-based medicine is more recent, appearing for the first time in a 1992 article [1]. The modern concept of evidence-based medicine is based on the notion that doctors’ decisions should be based not only on evidence in general, but also on evidence of the highest quality [3]. A cornerstone of evidence-based medicine is the hierarchical evidence classification system; this hierarchy is known as the levels of evidence. Doctors are encouraged to find the highest level of evidence to answer to clinical questions [4].

Accordingly, this study aimed to evaluate the articles on foot and ankle medi cine published in three renowned Brazilian orthopedic journals between 2010 and 2019.

Three researchers independently searched for articles on foot and ankle medicine published in three renowned Brazilian orthopedic journals (i.e., Revista Brasileira de Ortopedia, Acta Ortopédica Brasileira, and Revista Abtpé) from 2010 to 2019. Articles were classified according to the level of evidence based on the classification proposed by the OCEBM (Figure 1). Controversies were resolved by all members of the research group meeting and discussing until reaching consensus.  Articles unrelated to foot and ankle medicine, editorials, and letters to the editor were excluded.  The variables evaluated were as follows: institution of origin of the research, place of origin of the article (country or state), and article theme. 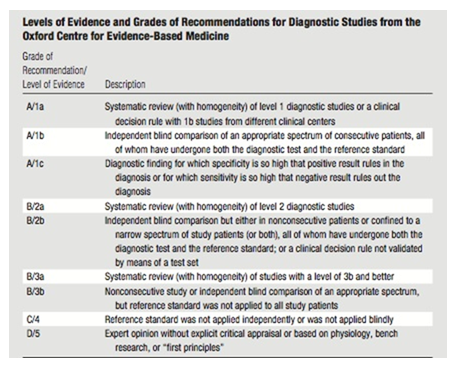 Figure 1: Levels of evidence according to the Oxford Center for Evidence-based Medicine.

When assessing the distribution by place of origin of the articles, we identified published articles from 11 Brazilian states. The state with the largest number of publications was São Paulo (152, 51.35% of the total). Authors from different countries (i.e., USA, Portugal, China, Chile, Switzerland, England, South Korea, Turkey, Poland, Argentina, and Germany) contributed to the publication of 33 articles in the analyzed national journals. Figure 2  shows the geographic distribution of the articles by place of origin.

Legend: The articles from other countries were compiled together and are referred to in Figures as “Foreigners”. 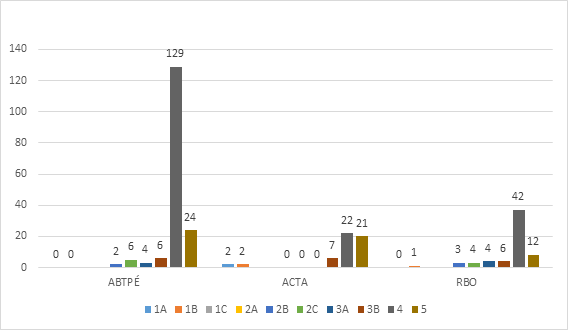 Figure 3: Distribution of articles by level of evidence. 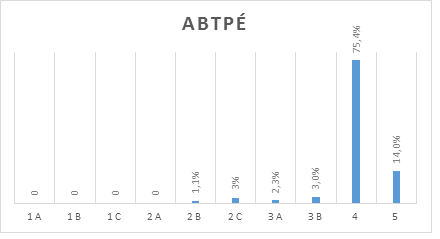 Figure 4: Percentage distribution of articles from Revista Abtpé by level of evidence. 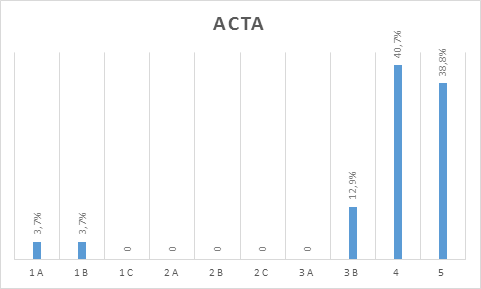 Figure 5: Percentage distribution of articles from Acta Ortopédica Brasileira by level of evidence. 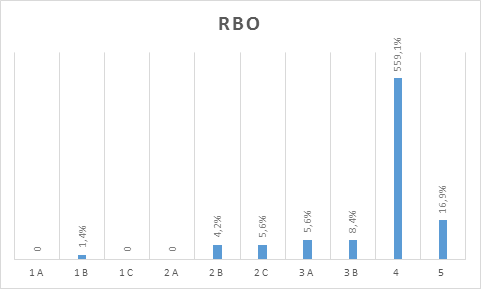 Regarding discussed topics, the most discussed was present in 64 (21.6% of the total) articles, being related to different types of fractures of the foot and ankle (i.e., 21 on calcaneus fractures, 14 on the talus, 13 on the ankle, 9 on Lisfranc dislocation fracture, 5 on fractures of the base of the fifth metatarsal, 1 on peritalar dislocation, and 1 on stress fractures in children). The second most discussed topic was hallux valgus, with 32 (10.8%) articles, while pathologies of the calcaneus tendon (tendinopathies and ruptures) were studied in 19 (6.4%) articles. Moreover, 13 articles (4.6%) were related to ligament injuries of the ankle and 13 to the treatment of clubfoot. Nonetheless, there were articles on flat feet in adults and children, rigid hallux, metatarsalgia, plantar fasciitis, tarsal coalition, varus and cavus feet in the Charcot Marie Tooth disease, diabetic foot problems, and ankle arthrodesis.

Another relevant fact was the number of international articles, showing a great interest from foreign authors in publishing in these renowned national journals; specifically, 33 articles were identified, corresponding to 11% of the total. Veiga et al., when analyzing    articles on knee surgery published by foreigners in national journals within a decade, found that they accounted for only 1.6% of the total of articles reviewed.

Additionally, the classification by level of evidence of articles according to the OCEBM showed a predominance of articles with levels 4 and 5 of evidence across the three evaluated journals. This predominance of articles with a lower level of evidence finds consonance in the literature for international journals; according to Baumhauer, research on the foot and ankle is composed mainly of retrospective case series studies of level 4 of evidence [6]. In 2013, Hunt and Hurwit analyzed level of evidence for scientific literature regarding foot and ankle medicine, finding that 70% of the studies were of level 4, 12% of level 3, 9% of level 2, and 9% of level 1 [7]. Thus, although these studies utilized a classification for the level of evidence other than the one we utilized, they still demonstrate that articles with a lower level of evidence are predominant in this field of research, concurring with our findings. Still, despite the search of editors for authors with research that have levels 1 and 2 of evidence, the history of medicine shows several studies of level 4 of evidence that have changed the way we understand the health/disease process. In the 1980s, Conant and Volverg recognized a single tumor, Kaposi’s sarcoma, in eight homosexual men, with the recognition of this link (i.e., different homosexual mean had the same tumor) later leading to the recognition of the transmission of the HIV virus [8]. Furthermore, the work of Mann and Thompson [9] describing the surgical treatment of the adult flat foot caused by posterior tibial dysfunction was a significant series of cases for the literature, despite its lack of critical evidence; this cited study incited a series of higher-level evidence studies with control groups comparing different treatment options for posterior tibial tendon dysfunction.

Another factor that may have influenced our results is that the present study exclusively evaluated publications in national journals; thus, we cannot rule out the possibility that Brazilian authors publish their articles with a better level of evidence in foreign journals that have a greater impact factor. Given this limitation, it is not possible to generalize our results regarding level of evidence for the whole scientific production in Brazil regarding foot and ankle medicine, with our results being, rather, more confined to the three studied journals. Regarding the most discussed topics, there is a relationship with the diseases or conditions that are commonly found in clinical practice. Trauma, hallux valgus, pathologies of the calcaneus tendon, and ligament injuries are frequent complaints in foot and ankle medicine outpatients within Brazil. Summarizing, our results demonstrate the need for the development of initiatives that stimulate the increase in the number of foot and ankle medicine research, the popularization of scientific production in this field nationwide, and the improvement of the level of evidence of publications on the topic in Brazil.

Between 2010 and 2019, 296 articles on foot and ankle medicine were published in the journals Acta Ortopédica Brasileira, Revista Brasileira de Ortopedia, and Revista Abtpé. Most articles originated in the state of São Paulo and were classified, according to the OCEBM, at levels 4 and 5 of evidence. Finally, the most discussed topics were foot and ankle trauma, hallux valgus, pathologies of the calcaneus tendon, and ligament injuries.

No conflict of interest to declare.