Sound is a form of energy. It is a compressional wave triggered by vibrations [4]. The vibrations that are felt on touching the surface of a speaker are equal to the vibrations disturbing the air. Sound is similar to countless other things which are invisible in our universe. It cannot be seen as well but sound can be heard as it reaches our ears in the form of waves produced when particles in the medium vibrates [5]. Hence, vibration in a body generates sound.

Music and noise are two different things; the former has a soothing effect and the latter is infuriating. Music is related to rhythmic and periodic vibrations while noise has no periodic vibrations [1]. Music for about a thousand of years has been a source of harmony for people. It is a soothing and tranquilizing form that is produced from musical instrument. Music is a fine art of sound and is basically prearranged by people to express their feelings a certain way.

Music certainly has many dimensions in stirring various physical, psychological, spiritual and social stages of awareness [6]. Currently, music is categorized as both positive and negative. Music that has valuable potentials and inspires at emotional and spiritual levels and causes relaxing, calming and healing effects is known as positive music whereas negative music induces negative emotions, irritation, bitterness, sadness, animosity and terror [2].

Octave which can simply be known as a doubling in frequency (40 Hz is one octave greater than 20 Hz) is one dynamic conception related to music. According to Shah (2001), the several ‘octaves’ has been arranged on the basis of audible sound range and depending on some mathematical principles, an individual octave has been classified into intervals. An octave is categorized into twelve parts, which is the width of a semitone, i.e. the frequency ratio of the interval between two adjacent notes, is the twelfth root of two and is mathematically expressed as [7]:

After the first concept of perception of sound waves by plants as suggested by Sir Jagdish Chandra Bose, a Nobel Prize winner in 1977, who was renowned for his work on the physiology of plants; Dorothy Retallack also carried out one of the first experiments in 1973 to study the relationship between plants and music. Various styles of music were used by Retallack in her experiments and she discovered that the plants showed a tendency to move away from Led Zeppelin and Jimi Hendrix but Bach organ music and jazz attracted them. Nevertheless, she found that North Indian classical music played on the sitar was their favorite but country music was seen to have no such relevance in plant life [3].

1.4 Music in relation to plants

All living beings, be it animals or plants, all respond to external stimuli. Plants, the multicellular organisms also respond to various types of external stimuli including Sound vibration. These vibrations stimulate different phytochemical and biochemical reactions which in turn helps in the developmental processes of the plants. In case of human beings, sound waves set up vibration in our ear drum which in turn is perceived by the brain and help us to recognize the type of sound of varying frequencies and amplitude.

Plants, in a similar way receive vibrations through protoplast. Various studies related to the effects of sound waves subjecting to seeds and plants, generally known as sonication, has been published in scientific literature [8, 9]. The effect of music on 30 Rose (Rosa chinensis) plants taken in separate pots was studied [10].

2.1.1 Acoustic chamber: An acoustic chamber was used with a sound system to produce the sound of known frequency through Indian Classical Instrumental Music both String music and Closed pipe music) for the experimental plants.

2.1.2 Plant material: The plant commonly called as sweet leaf [12] with the scientific name Stevia rebaudiana (Bertoni) was purchased from medicinal garden at Patrapada, Bhubaneswar in large number and used as for the experiments.

2.1.4 Ragaas: The application of the Indian Classical Instrumental music notes (Octaves) through different Ragaas were applied to our experimental plant set in the following time sequence: -

All the above mentioned four Ragaas have been observed to promote seed germination and vegetative growth. Physiognomic studies were conducted on an interval of four days for a period of 30 days. A thread was used to measure the height of the plant, leaf lamina length, leaf lamina breadth, and spread of the plant in east-west and north-south directions. It was then placed over a 60 cm long measuring tape and the measurement data were recorded in table.

The plants were treated with the above harmonic sound frequencies of musical notes for 4 hours at frequent intervals daily.

2.1.1 Physiognomic study: All the plants were kept inside the acoustic chamber. The control plants were taken outside of the chamber when the treatment was given. Different aspects of physiognomic studies like height of the plant, leaf lamina length per plant, leaf lamina breadth per plant, spread of the plant in east- west direction and in north- south direction, and diameter of the stem were considered. These aspects were measured in every four days.

2.1.2 Biochemical analysis of leaves: To study the effect of this Indian Classical instrumental Music on biochemical aspects through various observations and inferences from the experiments, a series of biochemical tests were performed in order to estimate the quantity of total proteins, total carbohydrates and total chlorophyll contents in the leaves of Stevia, treated with ragaas verses control.

2.1.2.1 Protein estimation: The amount of protein was quantified by using the method of Lowry et al 1951 [13]. 500mg per 100gm fresh weight of both control and treated leaf sample was taken for analysis.

2.1.2.3 Chlorophyll estimation: Chlorophyll is extracted in 80% acetone and the absorbance are read at 663 and 645 nm in a spectrophotometer, using the absorption co-efficient, the amount of chlorophyll is calculated [15]. 500mg per 100gm fresh weight of leaf sample was taken for analysis.

The amount of chlorophyll present was calculated by the following formulae,

Several studies have proved that there is an association between sound vibrations and plants lives and that both are profoundly interconnected to each other [3]. While sound with low amplitude improves plant growth, likewise, any type of sound vibrations with large amplitude values for e.g., rock music declines plant growth [3].The present research work embraces two important aspects of the plant growth and the physiological processes involved therein were taken into consideration:

3.1 Effect on physiognomy of plants

Physiognomy is amalgam of external features and different growth forms in plants. It is one of the most pivotal studies in case of plant classification.

3.1.1 Physiognomic study of Stevia rebaudiana (Bertoni): To perform the experiment two sets were taken; one set with 4 plants as control and the other set with 4 plants as treated. Physiognomic parameters like plant height, no. of leaves per plant, leaf lamina length, leaf lamina breadth, leaf texture, leaf color, spread of plant in east- west and in north-south directions and diameter of the stem for a period of 30 days. Treated plants showed an increment in the growth as compared to the control and survived longer (20 days longer) than the control plants. The average no. of leaves in control was 53 per plant and 64 in treated plants and the rest all data are given in tabular form. The observations are shown in tables and figures (Table 2; Figure 1; Figure 2; Figure 3; Figure 4).

Table 2: Measurements of physiognomic parameters in sweet leaf (Stevia rebaudiana) after 30 days of treatment with music. 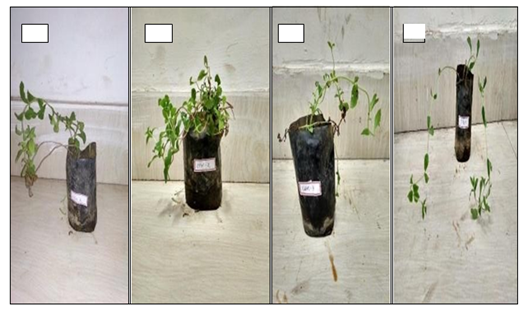 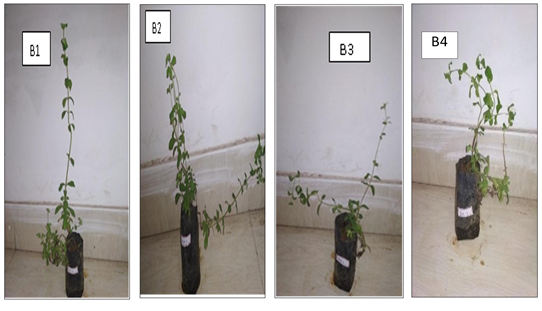 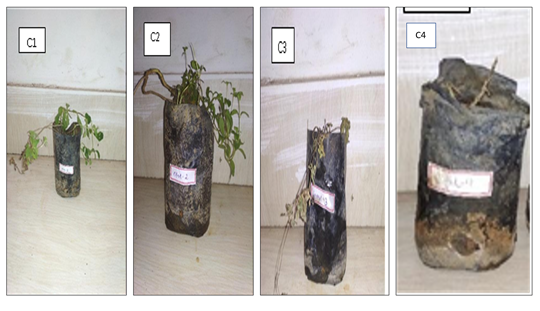 3.2.1.1 Effect of harmonic octave consonants on total protein contents: Leaves of both control and treated were taken for extract preparation. The total protein content of the leaf samples was estimated by the Lowry et al 1951 [13] method. The data generated is recorded in table (Table 3) and analyzed in figure (Figure 5). 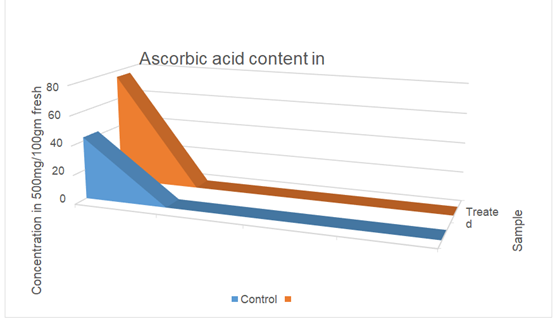 Audible sound (20–20000Hz) widely exists in natural world. However, the interaction between audible sound and the growth of plants is usually scanty in biophysics research. Not much effort has been put forth in studying the relation of plant processes and audible sound.

A certain study has revealed that plants have mechano-sensitive channels that perceive sound vibrations. In another experiment it was shown that sound vibrations can alter tensions in biological membranes that could possibly stimulate signaling pathways through the activation of the mechano-sensitive channels in the membranes of plant cell (Haswell and Meyerowitz, 2006). Other experiments carried out showed that certain frequencies of sound vibrations can induce seed germination, root elongation, callus growth, and cell [17]. An experiment was conducted in which 12 tobacco plants were exposed to noise and showed overall 40.6 % decrease as compared to the control plants [18].

In the present research study, it was also seen that there was an increment in the overall growth of the plant body compared to the control though not much of difference was found. Stevia rebaudiana (Bertoni) when subjected to soft harmonic sound vibrations, the results showed a difference i.e., there was an increment in the physiognomic parameters of the treated plant as compared to the control (untreated) plant. The possible explanation to this would the perception sound vibration and relay of extended signaling pathways leading to the overall increased growth of the plant and leaves.

Audible harmonic frequencies not only accelerate growth but also significantly influences the concentration of various metabolites; e.g., chlorophyll and starch are increased by it [19]. Also, musical vibration stimulates water molecules within biological systems [20]. As a result, the temperature, which is a measure of motion of molecules is raised due to vibration of the water molecules. The rate of metabolism is thereby, increased with the increase in temperature. Resonances from the audible harmonic sound vibration can combine directly into biological systems because they are constituted mostly of water.

Indole Acetic Acid (IAA) is an essential plant hormone that helps in plant’s growth and development. Zhu and co-workers observed that IAA content in plants were found at an increased level in six species of vegetable plants when exposed to musical acoustic frequencies in comparison to the control plants [21]. The present study also revealed an increase in carbohydrates, proteins and chlorophyll content. The increased metabolic rate might be a reason for the observed results.

The authors would like to sincerely acknowledge the Department of Botany, Ravenshaw University, for providing all the supports and the infrastructural facilities required to carry out the entire work. We also acknowledge the Acoustical and Biochemistry laboratory where the entire experimental work was done. Our special thanks and acknowledgement go to our supervisor Prof. Sanhita Padhi for her immense support and timely supervision.