Rituximab is a chimeric anti-CD20 monoclonal antibody that is used to treat CD20+ non-Hodgkin's lymphoma, and a wide variety of autoimmune diseases. Rituximab-associated tendinopathy has been described in a few cases in the literature. Here, we present a case of Achilles partial tendon rupture with classic clinical and radiographic findings in a patient treated with rituximab.

Rituximab is a chimeric monoclonal antibody that binds to the CD20 surface marker expressed on B cells. This includes precursor B cells (pre-B cells) and mature and memory B cells. It was originally used to treat lymphoma but is increasingly used for the treatment of autoimmune diseases. Drug-induced tendinopathy has most commonly been associated with fluoroquinolones, statins, glucocorticoids, and aromatase inhibitors. Rituximab-induced tendinitis and tendon rupture has been described in a case series of 3 patients for the first time [1]. Investigations are needed to see whether use of Rituximab is associated with occurrence of Achilles tendon rupture. Herein, we describe a 63-year-old male patient who developed a nontraumatic Achilles Tendon rupture after receiving Rituximab therapy.

63-year-old African American male with a past medical history of Rheumatoid Arthritis and recent diagnosis of IgG-4 related lung disease for which he was started on Rituximab therapy. Patient was sent to the emergency department from his Primary Care Physician (PCP) office for concern of right leg Deep Venous Thrombosis (DVT). Patient presented to his PCP for his follow up visit. Patient’s main complaint was right ankle/distal calf pain that started 12 days prior to his presentation and 6 days after his second Rituximab therapy. Patient reports that 12 days prior to his presentation, as he was raising up from a kneeling position, he experienced a pop in the right calf. He notes immediate onset of pain and swelling over the right ankle. States he has been able to walk since the incident but notes he has been trying to keep his leg straight and has not attempted to put weight on the ball of his right foot. Additionally, he reports significant bruising over the calf that started on same day of incident. Denies any numbness or tingling in the right lower extremity. For concern of DVT, he was sent to the ED. Right lower extremity examination revealed edema and ecchymosis over the posterior distal calf overlying the Achilles tendon. Tenderness to palpation and partial defect palpable along the Achilles tendon cord of the posterior ankle. Patient was unable to perform single leg heel raise while standing due to pain. Plantar flexion noted with Thompson test, although less in comparison to the contralateral extremity. He was able to actively dorsiflex/plantarflex the ankle with decreased strength of plantarflexion (Ankle plantar flexion 4/5 compared to contralateral side). Sensibility presents to light touch in the sural/saphenous/tibial/superficial peroneal/deep peroneal distributions. 2+ Dorsal Pedis and Posterior Tibialis pulses. Brisk capillary refill was present distally. An X-ray of right ankle was done and demonstrated no acute fracture or dislocation but showed an area within the posterior heel concerning for partial discontinuity of the Achilles tendon (Figure 1). A clinical diagnosis of partial Achilles tendon rupture was rendered. No Magnetic Resonance Imaging (MRI) was performed. The risks, benefits, and alternatives of operative versus nonoperative management for his partial Achilles tendon rupture was discussed with the patient by the orthopedics team and mutual decision was reached to pursue a trial of nonoperative therapy. His right foot was placed into a short leg splint in a position of comfort with slight plantar flexion to allow for soft tissue rest and was made non-weight- bearing. At 2 week follow up, he was placed in a Controlled Ankle Movement (CAM) boot and was advanced to full weight-bearing as tolerated. At 6 week follow up, the CAM boot was removed, and he managed to walk without issues. The patient had regained total range of motion of the ankle with no tenderness at the Achilles tendon. 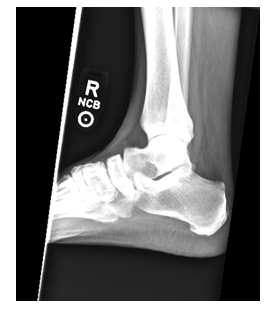 Rituximab has been proved effectively in treating malignant and autoimmune disease such as lymphoma, leukemia, rheumatoid arthritis, granulomatosis with polyangiitis and microscopic polyangiitis [2-4]. Rituximab is a genetically engineered chimeric murine/human monoclonal IgG1 kappa antibody directed against the CD20 antigen [5]. Several adverse effects have been identified including but not limited to pancytopenia, uveitis, serum sickness, polyarticular arthritis, heart failure, bowel obstruction, interstitial lung disease and Posterior Reversible Encephalopathy Syndrome (PRES) [6-10]. To date, there have been only a few cases of Rituximab associated Achilles tendon rupture reported in literature [1]. Our case highlights a potential association between Rituximab and Achilles tendinopathy/rupture since the symptoms started 6 days after he received the second Rituximab infusion suggesting a potential cause-effect relationship.