Lycium barbarum L. known as Goji berry is a plant with wide variety of medicinal properties, including anticancer. The present study aimed to explore the cytotoxic effect of Lycium barbarum fruit extract (LBE), and its combination with doxorubicin on MCF-7 and MDA-MB-231 breast cancer cells. The result of MTT assay showed that the single treatment of doxorubicin performed significant cytotoxic effect on MCF-7 and MDA-MB-231 cell lines. The combination of LBE and doxorubicin on MCF-7 and MDA-MB-231 cells showed synergistic cytotoxic effect based on the fractional effect analysis (FA) and the calculated combination index (CI). Increasing the anticancer effects on the one hand and preventing the dose-limiting effect, like cardiotoxicity on the other hand, of the anthracycline antibiotics indicate L. barbarum fruits as chemosensitizing and chemoprotective at the same time.

Lycium barbarum L. (Solanaceae), known as Goji berry, is widely used as traditional medicinal plant or food supplement in China for many years. The part of the plant that is mainly used for medical purposes is the fruit. Constituents of the L. barbarum fruit include basically polysaccharides and proteoglycans (23% of dried mass), carotenoids (mainly zeaxanthin dipalmitate), vitamins (riboflavin, thiamin and ascorbic acid), fatty acids, free amino acids, flavonoids, phenolic acids and anthocyanins [1, 2]. The multiple potential health benefit effects of the consumption of L. barbarum fruits are described in the literature, the main ones are antioxidant and anticancer activities [3-6]. Doxorubicin is an anthracycline antibiotic widely used in the treatment of oncological diseases, including breast cancer. The main mechanism of action is described by intercalation in the structure of DNA and RNA, which leads to suppression of synthesis. Subsequently, chain breaks occur through inhibition of topoisomerase II and free radical formation [7]. Cardiotoxicity is a dose-limiting adverse effect of cancer treatment with doxorubicin. It can hinder the treatment and even lead to a fatal outcome [8]. The primary mechanism suggested to cause cardiotoxicity is increased oxidative stress [9]. The main purpose of this article is to evaluate the combined effects of doxorubicin with L. barbarum fruit extract (LBE) on two breast cancer cell lines.

barbarum fruits (Lot ?: L05042017) were provided by Paula Fruits Ltd-an official importer of Goji berries for Bulgaria with guaranteed Chinese origin. Preparation of total L. barbarum extract: 200 g of dried Goji berries were soaked in cold distilled water for 30 minutes and then homogenized in a laboratory blender. The obtained mixture was extracted for 1 hour at 60°C and shaking on thermostatic water bath (NUVE, Turkey). After that, extract was centrifuged (6000 g) and supernatant was denoted as L. barbarum total extract (LBE). Doxorubicin and all other used chemicals were of analytical grade and were purchased from the local representatives of Merck (Darmstadt, Germany) and Sigma (St. Louis, USA), unless otherwise indicated.

Cell viability was evaluated in MCF-7 and MDA-MB-231 cells by MTT dye reduction assay according to the standard protocol [10], with some modifications. MCF-7 and MDA-MB-231 cells were seeded into 96-well plates in exponentially growing manner. The cells were incubated with the used compounds, and cell viability was determined 72 h later. The treatment medium was replaced with DMEM containing 0.5 mg/mL MTT and the cells were incubated for three hours. The MTT solution was removed from the plates and the formazan crystals were dissolved in DMSO. The optical density of the samples was measured by a microplate reader (TECAN, Sunrise TM, Groedig/Salzburg, Austria) at 540 nm. Cell viability was expressed as per cent of untreated control.

We used two methods for determining the pharmacodynamics drug interactions. The first of them is the most widely used and is based on the multiple drug effect method of Chou–Talalay [11], represented as the following equation:

Where D1 and D2 are the doses of the two drugs in combination, that inhibit the proliferation of the cells by x% and Dx1 and Dx2 are the doses of the drugs alone, that are expected to be necessary to achieve the experimentally measured response by x%. In our study, the CI values were determined for each combination of LBE and doxorubicin using CalcuSyn® (Biosoft, Cambridge, UK) [12]. A CI value less than 0.9 indicates synergism, CI equal to 0.9-1.10 indicates additive interaction, and CI greater than 1.10 indicates antagonism. The other used method is fractional effect analysis (FA) [13] or Bliss independence [14]. The effect in this method is considered synergistic when the observed effect is greater than the product of the effects of each individual agent. The equation used for calculating the combining effect (CE) is:

The statistical evaluation was performed using Graph Pad Prism 8.01 software, and significant differences between groups were analyzed using ANOVA. All results are expressed as arithmetic means ± standard deviation (SD) of the means of three separate experiments (each experiment was done with three parallels). A difference at P < 0.05 was considered statistically significant.

In the first set of our work, we defined the sensitivity of the used cell lines to doxorubicin. The both cell lines showed dose-dependent decreases in cell viability compared to the control (untreated cells). The IC50 value against MCF-7 cells were 0.07 µM, while against MDA-MB-231 were 0.79 µM. The obtained dose-response curves are given on Figure 1. As can be seen on the figure 1, MDA-MB-231 (triple negative) cells are significantly more resistant to the action of doxorubicin. To determine whether L. barbarum extract (LBE) could sensitizes MCF-7 and MDA-MB-231 to treatment with doxorubicin, we cultured cells with doxorubicin at concentration range of 0.02 to 0.6 μM, alone or in combination with fixed 100, 120 or 140 µg/ml LBE concentrations, for 72 hours. The cell proliferation was assessed using MTT assay. The results showed that cell viability was much lower with the combination treatment than with doxorubicin alone. The calculated and measured combination effects, using the Bliss method, are presented in Figure 2 and 3. 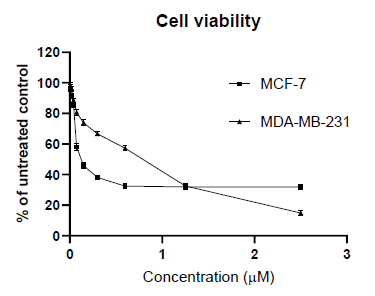 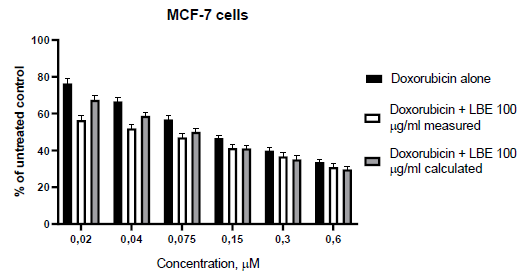 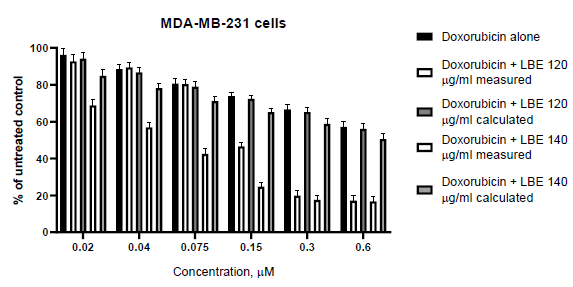 Figure 3: MDA-MB-231 cells treated with doxorubicin alone and in combination of fixed ether 120 or 140 µg/ml LBE.

Using the same results and the CalcuSyn® software, we calculated combination index. The results are presented in Table 1 and Table 2.

?he search for effective drug combinations and methods for their evaluation is the basis of in vitro pharmacodynamic drug interactions. Therefore, the aim of the present study was to evaluate in vitro combinations, which could be tested subsequently in in vivo conditions or in following clinical studies and to evaluate the most used methods for them. The most conventional chemotherapeutic agents, anthracyclines and taxanes are most commonly used in therapeutic protocols in breast cancer therapy. Doxorubicin, an antibiotic from anthracycline group, is one of the most effective antineoplastic drugs in the treatment of solid tumors (including breast cancer), but with many dose-limiting toxicities, such as bone marrow damage, cardiotoxicity etc. Therefore, we are looking for ways to preserve its high efficacy, or even in some cases to increase it, without increasing the possibility of adverse effects. The L. barbarum extract has been shown in numerous studies to have antitumor activity, expressed selectivity on tumor cells, organ protective effects (e.g. cardioprotective) and is suitable for combination with the chemotherapy [15-17].

In our previous study, we have proven that L. barbarum polyphenolic fraction has considerable antioxidant effects and this correlates with its cytotoxicity against breast cancer cell lines [4]. Also we have shown that polysaccharide fraction contributes to the antiproliferative effects of L. barbarum. Therefore, for the present study we used total water extract of L. barbarum fruits, which contains both polyphenols and polysaccharides. As could be seen from figure 1, MCF-7 cells show 10-fold more sensitivity to doxorubicin in comparison to MDA-MB-231 cells. When using the combination of doxorubicin (0.02-0.6 µM) with fixed 100 µg/ml LBE we observed synergistic effects at low concentrations (0.02-0.075 µM) and additive effects with the increase of doxorubicin concentrations. The CalcuSyn® software calculated combinational index (CI) values showed results that overlap significantly with fractional analysis (table 1). Only one difference is detected, the highest concentration of doxorubicin (0.6 µM) with LBE 100 µg/ml is assessed as antagonistic rather than additive.

Moreover, the addition of 120 or 140 µg/ml LBE resulted in a tenfold decrease in the IC50 values of doxorubicin on the MDA-MB-231 cell line-0.09369 µM and 0.07231 µM respectively. Similar synergistic effects of conventional chemotherapeutic agents, such as doxorubicin, with natural products are reported by other authors [18, 19]. In addition, our previous studies conducted in rats, have shown that L. barbarum isolated fractions are able to reduce doxorubicin-induced cardiotoxicity [20]. Biochemical cardiac markers of cardiotoxicity and histopathology have showed significantly less damage in the groups pretreated with L. barbarum isolated fractions, which have been supported by other publications [21, 22]. The both methods-Chou-Talalay Combination Index method (CTCI) and Fractional effect analysis (FA), are widely used to characterize pharmacodynamic drug interactions under in vitro conditions [23, 24]. In our case, the results obtained on both methods showed good correlation (r=0.764559) and no statistical difference between them (p=0.637). Therefore both methods could be used to evaluate pharmacodynamic interactions.

Lycium barbarum fruit (Goji berry) extract is a very good partner in the combination treatment with anthracycline antibiotics (e.g. doxorubicin). On the one hand, it is able to increase the antitumor activity (the therapeutic effect) and, on the other hand, to reduce the risk of dose-dependent cardiotoxicity (an adverse effect) in anthracycline therapeutic regimen against breast cancer.