A Ball in a Cage: (Semi) Floating Left Ventricular Thrombus

Left Ventricular (LV) mural thrombus is a fearsome complication in patients with Acute Myocardial Infarction (AMI): the combination of blood stasis, endothelial injury and hypercoagulability, often referred to as Virchow’s triad, is a prerequisite for in vivo thrombus formation [1]. The incidence of LV apical thrombus is higher especially in patients with anterior AMI and reduced ejection fraction (EF < 40%) [2]. One of the most feared complications of LV thrombus is the occurrence of thromboembolic events. The risk of LV thrombus formation is highest during the first three months following the infarction, but the potential for cerebral emboli persists in the large population of patients with chronic LV dysfunction.

The highest risk for embolization has been reported for cases in which the thrombus protrudes into the ventricular cavity or shows increased mobility, with an annual risk of 1.4–12 % [3]. Therapeutic options include surgical thrombectomy, treatment with low molecular weight or unfractionated heparin, oral anticoagulation therapy and thrombolysis. Surgical LV thrombectomy can be assumed as an effective treatment option especially in patients with protruding and mobile LV thrombi, as associated to high risk for systemic embolization. In patients with non-protruding and immobile thrombi, which are at low risk for embolization, a pharmacological treatment strategy should be initiated [4].

56-year-old man. Six years ago he underwent stenting on left anterior descendent coronary artery and circumflex coronary artery for STEMI. Two years later, during echocardiographic follow-up, a stratified thrombus was found in the apex of the left ventricle and treated with anti-coagulant therapy with apparent success. Currently complaining of atypical chest pain he underwent trans-thoracic echocardiography which showed a dilated LV (LVEDD 85ml) with reduced ejection fraction (38%), antero-lateral wall motion anomalies and a large floating mass with a minimal pedunculus, bouncing against a chord of mitral valve apparatus as if in a cage (Figure 1).

Once transferred to our unit he underwent urgent cardiac surgery to remove the mass and treat LV aneurysm: a 4 cm mass was removed and Cooley ventriculoplasty performed (Figures 2, 3 and 4). Histological examination of the mass confirmed that it was a thrombus. The patient was discharged from the hospital in very good conditions after few days, prosecuting oral anticoagulant therapy. 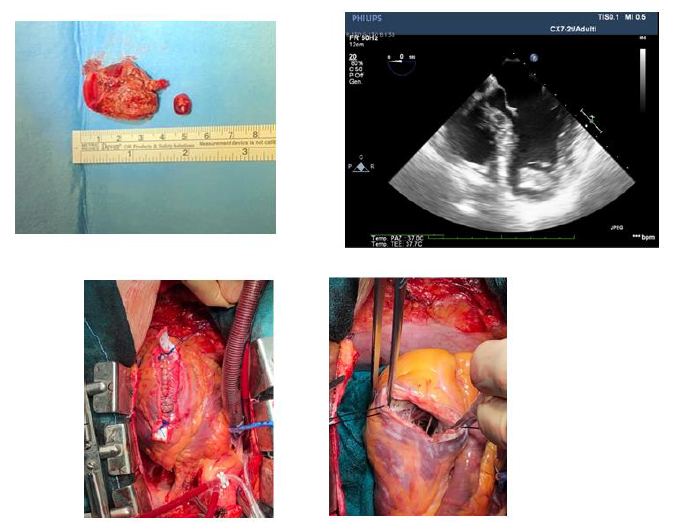 Extremely mobile ventricular masses are a rare finding and are an indication for urgent surgical treatment due to the high risk of embolization. In this peculiar case the mitral subvalvular apparatus constituted a sort of cage / filter that prevented the embolization of an extremely mobile thrombus of significant dimensions.