Danon disease is a rare X-linked dominant disorder caused by the lysosome- associated membrane protein 2 (LAMP2) gene. It is characterized by the triad of hypertrophic cardiomyopathy (HCM), myopathy, and intellectual disability. Genetic analysis was performed to confirm LAMP2 gene mutation in a family with Danon disease. We collected the clinical data included electrocardiography (ECG), echocardiography, and cardiac magnetic resonance imaging (cMRI) in a family with Danon disease to reveal the clinical phenotype. Genetic analysis showed that LAMP2 gene deletion mutation (c.257_258delCC) in this family. The proband and his 13-year-old cousin developed HCM with a typical Wolff-Parkinson -White (WPW) pre-excitation pattern. cMRI with late gadolinium enhancement (LGE) further confirms the myocardial fibrosis. The clinical expression of Danon disease is different in different genders.

Conclusions: Genetic and pharmaceutical approaches to upregulate LAMP2 gene expression may provide a novel therapy for patients with Danon disease.

Danon disease is a rare X-linked dominant disorder caused by loss-of-function mutations in the LAMP2 gene [1,2]. It is originally described as a type of lysosomal glycogen storage disease with normal acid maltase [3]. As males are hemizygous for the LAMP2 gene, there are striking differences in clinical phenotypes and outcomes between female carriers and affected male patients [4,5]. The first symptom, diagnosis, and death in men are at an earlier age compared to that of women [6]. In LAMP2 deficient mice, the autophagic vacuoles are extensively accumulated in some tissues such as abdominal viscera, skeletal muscle, and cardiomyocytes. To date, the precise pathophysiological mechanism through which LAMP-2 deficiency causes Danon disease is still not fully understood [7].

Danon disease is an X-linked dominant multisystem disorder affecting predominantly cardiac and skeletal muscles [2,4,8]. The HCM is a representing clinical feature, which rapidly progresses to heart failure leading to cardiac death [5,9,10]. Dilated cardiomyopathy and sudden death have been also reported in Danon disease [11,12]. ECG displays a Wolff-Parkinson-White pre-excitation pattern [6]. Massive left ventricular hypertrophy assessed with echocardiography has been commonly observed in Danon disease [1,5]. Recently, cardiac magnetic resonance and late gadolinium enhancement imaging have been wildly used for assessing cardiac function and validating the myocardial fibrosis precisely [13,14]. Clinically, cardiac transplantation is the only therapeutic option once heart failure occurs. Genetic testing in LAMP-2 gene is necessary to confirm the diagnosis of Danon disease. Although Danon disease has been reported in diverse ethnic populations, the prevalence of Danon disease is unknown [1]. In this study, We clinically followed and evaluated the cardiomyopathy in a family with Danaon disease by genetic testing and clinical features. The molecular mechanisms by which the LAMP2 mutation leads to LAMP2 deficiency are investigated.

The proband IV-5 was diagnosed with Danon disease at 14 years of age in Beijing Union Hospital, Beijing, China. Danon disease was confirmed with genetic testing to carry a deletion mutation (c.257_258delCC) in the exon 3 of the LAMP2 gene [15]. Thus, his family with Danon disease, including three males and five females, have been clinically and genetically evaluated in the Affiliated Hospital of Jining Medical University, Jining, Shandong Province, China. The study was endorsed by the Ethics Committee of the Affiliated Hospital of Jining Medical University (Jining, China). The pedigree of the family is shown in Figure 1A. All family members were genetically analyzed. Of the family members, the medical history of I-1 and I-2 were unknown. II-1 died at 78 and II-2 at 80. The grandmother of the proband, II-3, died of heart disease at 45. II-4 died of sudden death at 21 and II-5 died of heart disease at 48.

Genetic analysis confirmed that IV-5, IV4, and V-1 were homonymous for LAMP2 gene mutation, c.257_258delCC in the exon 3. III-2, III-3, IV-2, IV-3, and IV-6 were confirmed to carry heterozygous LAMP2 mutations. As expected, no mutation was identified in his father, as well as III-5 and IV-7, the maternal uncle and cousin of the proband. The distribution of the LAMP2 gene mutation supported the clinical manifestations in the family members. The sequencing chromatograms for the proband and his parents were shown in Figure 1B. The DNA sequence for III-4 is normal. The III-3 reveals a heterozygous mutation. To explore the association of the mutation with splice variants of the LAMP2 gene, Results of agarose gel electrophoresis of cDNA about LAMP2A, LAMP2B and LAMP2C were examined in the proband and his parents (Figure 1C). In the proband, LAMP2A, LAMP2B, and LAMP2A/B/C were almost absent. His parents had normal levels of LAMP2A, LAMP2B, and LAMP2A/B/C. LAMP2C level was not detectable in the peripheral leukocytes. Taken together, these results suggested that the mutation may reduce the transcriptional rate of the LAMP2 gene or enhance the degradation of LAMP2A and LAMP2B transcripts. 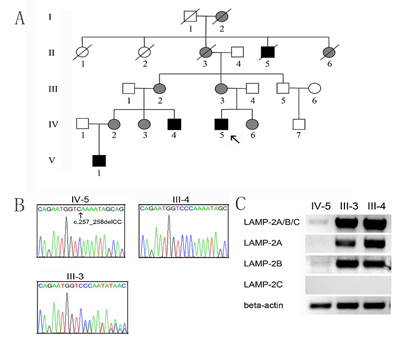 Figure 1: A. The pedigree of the family with Danon disease. The proband (IV-5) is indicated by an arrow. Open symbols indicate the unaffected members; black symbols affected hemizygous males, and grey symbols affected heterozygous females. B. Sequencing of the LAMP 2 gene exon 3 of the proband IV-5 and his parents (III-4, III-3). C. The electrophoresis results of cDNA about LAMP2A/B/C, LAMP2A, LAMP2B, and LAMP2C. The human beta-actin was used as the internal control.

The cardiac magnetic resonance imaging (cMRI) with late gadolinium enhancement was performed with Siemens Verio 3.0 MRI in III-2, III-3, IV-2, IV-3, IV-4, IV-5, and IV-6, who carried the LAMP2 gene mutation (Figure 2C). First pass rest perfusion images revealed late gadolinium enhancement (LGE) in the mid layer of the left ventricle in the proband IV-5 and IV-4. In the hearts of their mothers III-2 and III-3, LGE was visible in the muscular interventricular septum and the front wall of the left ventricle. The LGE for IV-2 was also consistent, but normal in IV-3 and IV-6. 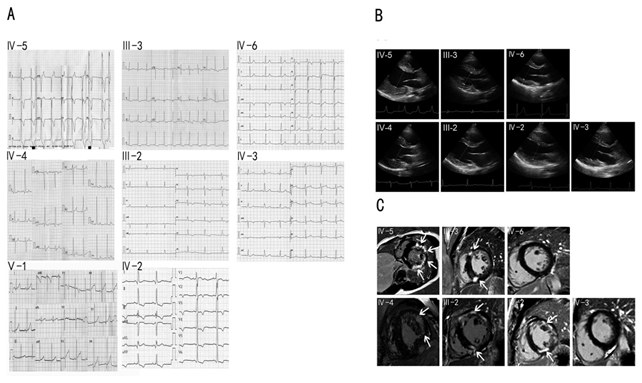 Table2: Echocardiography data of the family members with the LAMP2 gene mutation

In this study, clinical and imaging features and genetic analysis were fully described in a Danon disease family with a deletion LAMP2 gene mutation (c.257_258delCC), including male and female members of different ages. The cardiomyopathy characterized by ECG, echocardiography, and cMRI was the primary clinical manifestation in this family. The proband presented with hypertrophic cardiomyopathy and WPW syndrome, as well as premature ventricular contraction. Echocardiography indicated progressive hypertrophic cardiomyopathy. In particular, cMRI revealed diffuse enhancement in the midlayer of the left ventricle, indicating myocardial fibrosis. Similar clinical and imaging features were observed in the IV-4. The mothers (III-2 and III-3) had slight hypertrophic cardiomyopathy. The ages at onset in male and female patients were similar to published studies [6, 8]. Biochemical markers associated with Danon disease were all elevated. Although fatigue was noticed in two members of the family (IV-3 and IV-6), MRI did not found abnormities in the heart and skeletal muscle. In Danon disease, LAMP2 gene mutations cause a variety of clinical manifestations. All male and female patients have cardiomyopathy, 90% of male patients and 33% of female patients with skeletal myopathy, and 70% of male patients and 6% of female patients with intellectual disability (8Sugie, K., 2005). However, intellectual disability was not evident in this family, supporting that intellectual disability may not be a core constituent in Danon disease [16]. Therefore, the deletion mutation in the LAMP2 gene resulted in typical manifestations of Danon disease in this family. Echocardiography and cMRI may precisely assess cardiac hypertrophy and function at an early stage.

The human LAMP2 gene has been mapped to chromosome Xq24-q25, containing nine exons with alternate last exons, 9a, 9b, and 9c [17]. LAMP2 gene encodes three splice variants named LAMP2A, LAMP2B, and LAMP2C, which differ only at the carboxy- terminal lysosomal transmembrane domain and the short cytosolic tail [18]. LAMP2 gene is necessary for the maturation of autophagosomes with lysosomes by fusion and essential for macroautophagy and chaperone-mediated autophagy. Therefore, LAMP2 deficiency leads to the failure of autophagic and lysosomal biogenesis, maturation, and function, causing Danon disease [7]. In the Danon disease mouse model, inefficient lysosome biogenesis/ maturation and impairment of autophagosome-lysosome fusion contribute to the pathogenesis of muscle wasting, further supporting the role of autophagy dysregulation in Danon disease [19,20]. LAMP2A is highly expressed in placenta, lung, and liver and is essential to chaperone-mediated autophagy [17]. LAMP2B, which is more abundantly expressed in the heart, skeletal muscle, and brain, is known to be involved in macroautophagy [17,18]. The development of Danon disease is largely attributed to LAMP2B deficiency [2]. In this study, In the proband, LAMP2A, LAMP2B, and LAMP2A/B/C were almost absent, but his parents hadnormal. However, the protein level studies are needed. LAMP2C is tissue-specifically expressed in brain, heart, skeletal muscle, and small intestine, and has been implicated in chaperone- mediated autophagy and degradation of DNA and RNA by lysosomes [20]. In this study, the mutation c.257_258delCC affected LAMP2A, LAMP2B, and LAMP2C in this family. Interestingly, only wild type LAMP2A, LAMP2B, and LAMP2C transcripts were detected in female patients, suggesting that the mutant LAMP2A, LAMP2B, and presumably LAMP2C transcripts were repressed or degraded.

The clinical expression of Danon disease is different in different genders. manipulation with genetic and pharmaceutical approaches to upregulate LAMP2 gene expression may provide a novel therapy for patients with Danon disease.

The study was approved by the Ethics Committee of the Affiliated Hospital of Jining Medical University (approval no.: 2017-Article001). The patients or parents provided informed consent for publication of the cases.

S.W. and L.G. wrote the manuscript. Q.W. and N.Z. provided the references. S. P. and S.W. analyzed the gene test. Y.C. and B. Y. reviewed and edited the manuscript. All authors read and approved the final manuscript.