Methods: Ten older adults had two interventions in the following cross-over design: (i) ingestion of 25 g of glucose solution (GSI trial) and (ii) ingestion of 25 g of palatinose solution (PSI trial). Participants fasted for 12 h and then visited the laboratory. We assessed brachialankle (ba) and heartbrachial (hb) pulse wave velocity (PWV), the cardio-ankle vascular index (CAVI), brachial and ankle blood pressure, heart rate, and blood glucose levels at baseline (before ingestion) and 30, 60, and 90 min after ingestion.

Conclusions: We conclude that arterial stiffness may increase after glucose ingestion, but it is not elevated after palatinose ingestion.

Isomaltulose (palatinose: a registered trademark of Mitsui Sugar Co., Ltd.) is a carbohydrate that takes into account the quality of nutrition. Palatinose is a natural carbohydrate found in honey [11]. Palatinose has similar sweetness, taste, and energy as other sugars. However, the rate of degradation of palatinose in the small intestine is slow, and it can be absorbed slowly to suppress a rise in BG levels [12]. A study of 10 healthy individuals showed a slow increase in BG levels after palatinose intake, showing that peak values were lower than other sugars [13]. Therefore, palatinose appears to suppress an increase in BG levels while securing energy, and might decrease acute increases in arterial stiffness during hyperglycemia. However, the acute effects of palatinose ingestion on arterial stiffness are unknown.

We enrolled 10 older adults (8 women; age, 74.3 ± 3.4 years; height, 154.0 ± 3.4 cm; weight, 55.9 ± 4.3 kg) in this study. Study participants had blood pressure (BP) (<135/85 mm Hg) and fasting BG (<109 mg/dl). The participants had no history, taking, or exercise habits. All of the women who were enrolled were post-menopausal, which is important because estrogen improves arterial stiffness [14]. None of the women had received estrogen replacement therapy. Therefore, post-menopausal women were chosen to avoid the cyclical effects of hormones on arterial stiffness (Table 1). The experimental procedures and study purpose were explained to all volunteers who then provided written informed consent to participate. The study was approved by the Ethics Committee at Teikyo University of Science (18096). The study was performed in accordance with the guidelines for human experimentation published by our Institutional Review Board and the principles of the Declaration of Helsinki.

Each subject participated in two trials in a cross-over fashion as follows: (i) ingestion of 25 g of glucose solution (GSI trial) and (ii) ingestion of 25 g of palatinose solution (PSI trial). Each subject waited approximately 3 days after completion of one trial before crossing over to the next trial. After fasting for 12 h, subjects visited the laboratory. After resting in the supine position for 10 min, we measured arterial stiffness, brachial and ankle BP, heart rate (HR), and BG levels at baseline (before ingestion) and 30, 60, and 90 min after ingestion (Figure 1). The subjects refrained from consuming alcohol and caffeine and performing exercise for 24 h before testing. They were also asked to keep a log of all consumed foods and to repeat this diet during the second intervention. All measurements were performed at a constant room temperature of 25°C in a quiet room. Changes in lifestyle habits (eating habits, exercise, etc.) were prohibited during the intervention period. 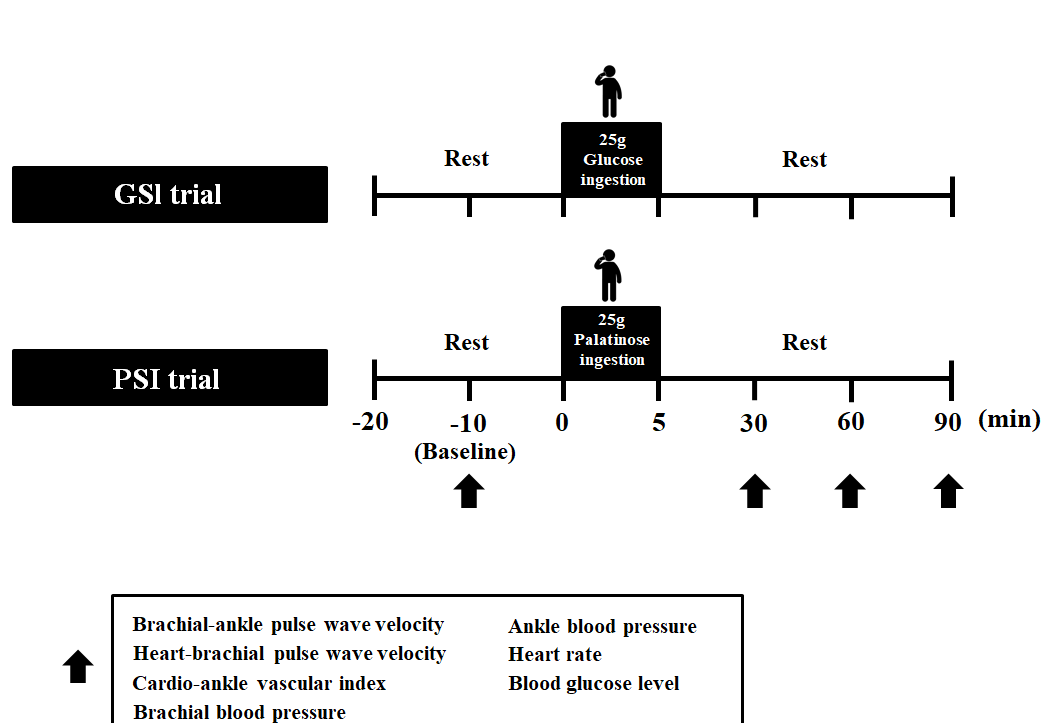 We performed two interventions with a cross-over design as follows: (i) ingestion of 25 g of glucose solution (GSI trial) and (ii) ingestion of 25 g of palatinose solution (PSI trial). Each volunteer waited approximately 3 days after completing one trial before crossing over to the next trial. After fasting for 12 h, volunteers visited the laboratory. After resting in the supine position for 10 min, we measured proximal aortic and systemic arterial stiffness, brachial and ankle blood pressure, heart rate (HR), and blood glucose levels at baseline (before ingestion) and 30, 60, and 90 min after ingestion.

On the basis of our previous study [5], we performed a power analysis with G*Power 3 to determine the appropriate sample size. As in our previous study, we assumed an effect size for arterial stiffness of 0.5. To detect differences with 80% power and a one-tailed α of 5% using analysis of variance, we calculated that each intervention would require eight individuals. We enrolled 10 participants in the current study.

In the supine posture, arterial pulse wave velocity (PWV) was measured using a vascular function test device (form PWV/ABI; Colin Medical Technology, Komaki, Japan and VaSera VS-1500AE; Fukuda-Denshi, Tokyo, Japan). In this study, brachial-ankle (ba) PWV and heart-brachial (hb) PWV were measured (Figure 1). For baPWV, we used a blood pressure measurement cuff with a built-in volumetric pressure pulse wave sensor. This cuff was placed around the upper arm and ankle to measure the difference in pulse wave propagation time [15]. For hbPWV, the pulse wave propagation time from the heart to the upper arm was defined as the time difference between the second heart sound and the notch of the brachial artery wave caused by aortic valve closure [16]. baPWV is an index that reflects systemic arterial stiffness and hbPWV reflects aortic arterial stiffness. The cardio-ankle vascular index (CAVI) was automatically calculated from five pulse wave signals using the following formula: CAVI = a [(2ρ/PP) × ln (SBP/DBP) × PWV2] + b, where DBP is diastolic blood pressure, PP is SBP–DBP, ρ is the blood density, and a and b are constants. The CAVI reflects systemic arterial stiffness and is index theoretically adjusted by BP [17].

All measurements were performed while the participants were supine in a quiet room. The daily coefficients of variation were 3 ± 1%, 3 ± 2%, and 3 ± 1% for baPWV, hbPWV, and CAVI, respectively.

Venous blood was drawn from the subjects’ left fingertip before (baseline) and 30, 60, and 90 min after ingestion of 25 g of glucose or palatinose. BG was measured using the flavin-adenine dinucleotide glucose dehydrogenase method and a Glutest Neo Alpha glucometer (Sanwa Kagaku Kenkyusho, Tokyo, Japan) [18]. The daily coefficient of variation for BG in the laboratory was 3 ± 1%.

Each participant orally consumed 25 g of palatinose or 25 g of glucose in 200 ml water within 5 min. The new World Health Organization guideline recommends that adults reduce the daily intake of free sugars to < 25 g [19]. 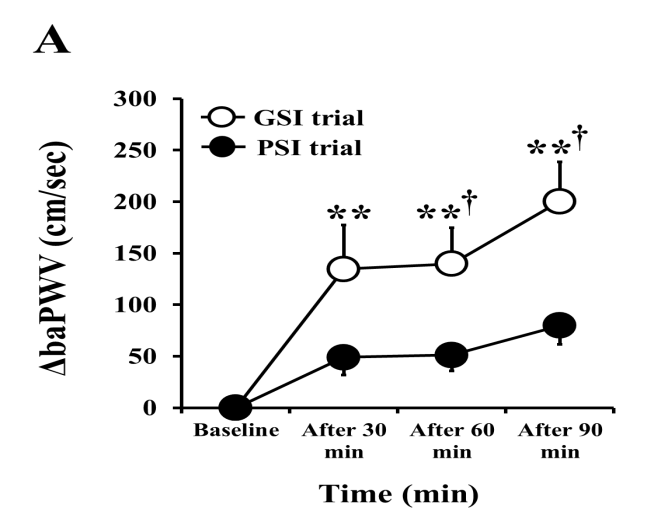 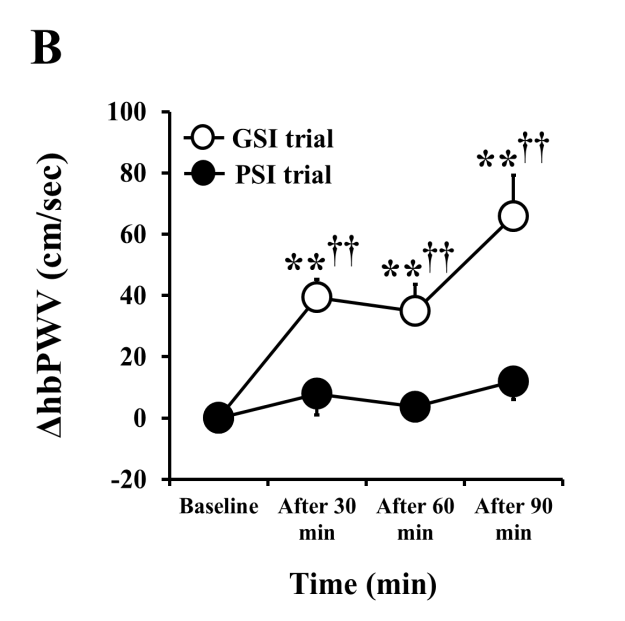 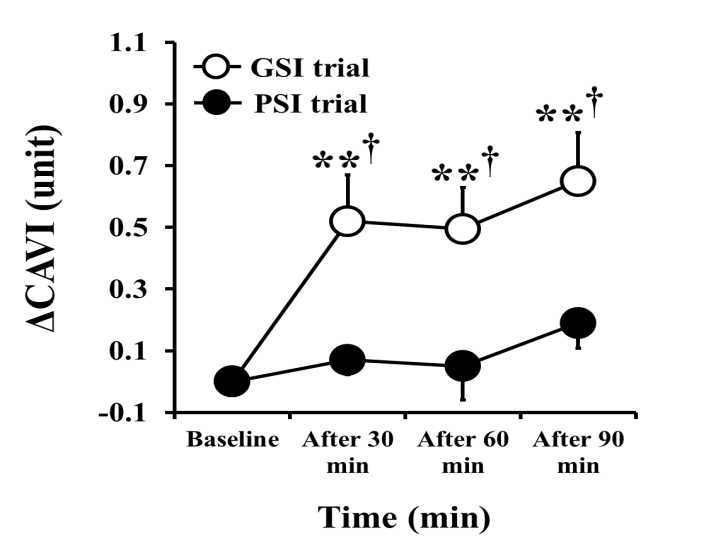 Figure 2: Changes in arterial stiffness after palatinose or glucose ingestion.

The main novel finding of this study was that baPWV, hbPWV and CAVI were lower after ingestion in the PSI trial than in the GSI trial. These results suggest that transient palatinose intake in older people consumes calories, while suppressing an increase in arterial stiffness.

Postprandial hyperglycemia is a risk factor for cardiovascular disease [20]. Therefore, to prevent cardiovascular disease, the postprandial hyperglycemia needs to be suppressed. A previous study on 10 healthy individuals showed that BG levels after consumption of palatinose led to a slow increase in BG levels after consumption [12]. Our results are consistent with these findings. Therefore, BG levels might not rapidly rise after palatinose ingestion. Consequently, palatinose might be able to moderate the postprandial rise in BG levels compared with other carbohydrates.

Although the purpose of this study was not to examine the mechanism in which arterial stiffness did not increase after palatinose ingestion involved, we can suggest some hypotheses. We observed an increase in arterial stiffness after glucose ingestion. CAVI is not affected by SBP [26]. Increased CAVI may be due to a decrease in nitric oxide (NO) [27]. Jacome-Sosa et al. [8] stated that “postprandial hyperglycemia is likely to reduce NO bioavailability by limiting arginine availability and increasing asymmetric dimethyl arginine (ADMA) relative to arginine, which is expected to limit substrate availability for NO biosynthesis while competitively inhibiting endothelial NO synthase (eNOS)”. Mah et al. (22) found that after glucose ingestion, vascular endothelial function was decreased, and blood glucose and malondialdehyde levels were increased, but there was no change after ingestion of fructose. Endothelial function is correlated with CAVI [28, 29]. Therefore, the increase in arterial stiffness after glucose ingestion might be related to a decrease in NO production. Future studies to measure NO are required.

Our study has some limitations. The sample size was small, which limits generalization of our findings. The results of this study cannot be generalized to healthy young people. Additionally, we did not measure changes in glucagon, insulin, growth hormone, and other vasoactive biomarkers, as well as endothelial function, which have important effects on arterial stiffness.

The ΔbaPWV, ΔhbPWV, and ΔCAVI are signi?cantly elevated at 30, 60, and 90 min compared with baseline after ingestion of glucose, but not palatinose. The ΔbaPWV, ΔhbPWV, and ΔCAVI are significantly lower after palatinose intake compared with after glucose intake. Our results suggest that arterial stiffness increases after glucose ingestion, but not after small amount of palatinose intake.

We thank all subjects of this study and their team staff. We thank Ellen Knapp, PhD, from Edanz Group (www.edanzediting.com/ac) for editing a draft of this manuscript.

This work was supported by a research funding from Mitsui Sugar Co., Ltd.

The authors declare that they have no confict of interest.

Statement of human and animal rights

The present study was in accordance with the declaration of Helsinki and approved by the institutional review board of the Teikyo University of Science (18096), Japan.

Written informed consents were obtained from all participants.