Citation: Suneet A Bhansali, Raj Sahulee. Arterial Ischemic Stroke as an Unusual First Manifestation of Parvovirus B19 Myocarditis in an Infant. Cardiology and Cardiovascular Medicine 4 (2020): 569-573.

We report a 20 month-old male who presented with sudden-onset left hemiparesis who was found to have thromboembolism of intracardiac thrombi from severely diminished ventricular function due to parvovirus B19 myocarditis. The patient experienced resolution of his thrombi with unfractionated heparin, normalization of his ventricular function with inotropic support, and steady recovery from his stroke with physical and occupational therapy.

Arterial ischemic stroke is an uncommon phenomenon in the pediatric population with incidence of 1.2-2.3 per 100,000 person-years [1, 2]. Common etiologies for pediatric stroke include congenital and acquired heart disease, arteriopathy, inherited and acquired thrombophilia, sickle cell disease, and congenital vascular syndromes. While less common, reports have described stroke in children with documented parvovirus infections [3, 4] and those with myocarditis and dilated cardiomyopathy [5, 6]. We report on an infant presenting after ischemic stroke as an unusual initial manifestation of parvovirus B19 myocarditis.

A 20 month old ex-27-week premature male presented to an outside emergency department with new-onset profound weakness and lethargy. Upon arrival the patient was noted to be minimally responsive, only responding to pain, and was also tachycardic with diminished peripheral perfusion on exam. Sepsis and meningitis evaluations were initiated, and computed tomography (CT) of the head and lumbar puncture were performed. Broad spectrum antibiotics were given along with a normal saline bolus for the decreased perfusion. After the bolus, a new gallop rhythm was noted and a pediatric cardiology consult was obtained. A limited echocardiogram demonstrated moderate to severely diminished left ventricular function (shortening fraction of 15%) and the patient was transferred to the pediatric intensive care unit and started on milrinone for inotropic support. The patient remained obtunded and minimally responsive, and repeat echocardiography the following morning failed to demonstrate an improvement in systolic function and the patient was transferred to the Congenital Cardiovascular Care Unit at Hassenfeld Children’s Hospital at NYU Langone Medical Center.

Upon arrival to the Congenital Cardiovascular Care Unit, the patient was immediately appreciated to have signs consistent with left-sided hemi-neglect and hemiparesis, with rightward gaze. A fast T2-weighted MRI of the brain was performed, identifying a large infarct in the territory of the middle cerebral artery (Figure 1A). Magnetic resonance angiography of the brain and neck showed reduced flow signal of the proximal right common carotid artery and right external carotid artery, and no flow signal in the right internal carotid artery (Figure 1B). Neurosurgery and stroke teams were consulted, however interventions such as craniectomy and thrombectomy were not recommended as the infarct was deemed to be older than 24 hours. 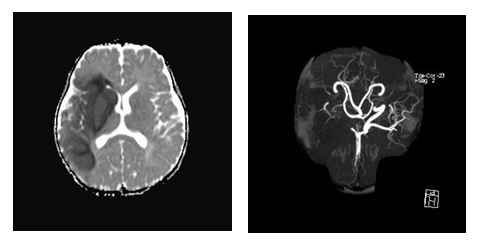 Upon further evaluation, the initial laboratory evaluation of the patient was significant for elevated troponin (0.73 ng/mL), brain naturetic peptide (6277 pg/mL), and lactate (2.5 mmol/L). Of note, hematologic evaluation failed to demonstrate a preexisting hypercoagulable state, as protein C and S, factor V Leiden, anti-cardiolipin antibodies, b-2 glycoprotein antibodies were all negative. Further evaluation identified a parvovirus B19 infection by polymerase chain reaction testing. Electrocardiogram was notable for sinus tachycardia, with ST and T wave abnormalities and T-wave inversion in the lateral leads. A complete transthoracic echocardiogram performed at our institution demonstrated several intracardiac thrombi in the right atrium, left atrium and left ventricle (Figure 2A, 2B), with moderate-severely diminished left ventricular systolic function (ejection fraction 30%). After multidisciplinary discussion, the patient was started on an unfractionated heparin infusion due to the risk of ongoing thromboembolism and later transitioned to subcutaneous low molecular weight heparin (enoxaparin) after seven days as his neurological status improved and the intracardiac thrombi decreased in size. To address his heart failure, he was continued on milrinone for inotropic support until his perfusion and acidosis improved, and was later transitioned to an oral digoxin, enalapril, and furosemide. Serial echocardiograms eventually showed resolution of his intracardiac thrombi and significant recovery of his ventricular function. The patient also received physical and occupational therapy with significant improvements in his neurologic deficits, and on hospital day 21 the patient was discharged to an acute rehabilitation facility. At his 6 month outpatient follow up, the patient has had complete normalization of his ventricular function, has been weaned off all heart failure medications, and he has minimal residual neurologic deficits.

Figure 2: (a) Echocardiogram upon transfer to the CCVCU demonstrating two thrombi in the left atrium;

(b) Echocardiogram upon transfer to the CCVCU demonstrating a thrombus in left ventricle.

Arterial ischemic stroke is fortunately a rare phenomenon in children, and although the incidence thrombotic events in patients with myocarditis is still unknown, it may be between 4-11% as described by two reports [5, 6]. More often, thromboembolic events are described as later complications of heart failure or management with mechanical circulatory support in patients with myocarditis.

Thromboembolic stroke is a rare complication of myocarditis in children, especially in the absence of an underlying hypercoagulable state. Inherited hypercoaguable states include mutations affecting antithrombin, protein C, protein S, and factor V Leiden and acquired causes include nephrotic syndrome, oral contraceptive use, antiphospholipid antibodies, and infections that result in increased coagulation and endothelial injury [7]. Although reported with parvovirus B19 [3, 4], more commonly, infections from varicella, Epstein-barr-virus, adenovirus, Borrelia Burgdorferi, adenovirus, influenza virus, paramyxovirus virus, yersiniosis, and streptococci have been associated with stroke in children [8].

Studies of children with dilated cardiomyopathy have shown increased incidence of thrombi in patients with diminished ventricular function [5, 6]. There is also data that has shown increasing ventricular and atrial thrombosis in murine subjects with myocarditis [9]. These studies support the theory of a transient hypercoagulable state leading to increased risk for thrombus formation in patients with diminished ventricular function.

The American Heart Association recommends antithrombotic therapy for adults with heart failure with reduced ejection fraction and atrial fibrillation or previous thromboembolic event [10]. Currently, there are no published guidelines for antithrombotic therapy in children with myocarditis with or without reduced ventricular function. Lin, et al. described their use of anticoagulation and antiplatelet therapy for 45 patients with myocarditis, but failed to demonstrate a reduction in risk for thrombotic events given the low incidence seen [6]. For our patient, we utilized a similar anticoagulation strategy given the extensive clot burden and initial presentation with a thromboembolic event. Fortunately, our patient did not suffer further thrombotic events and the intracardiac thrombi resolved.

In conclusion, strokes are rare initial manifestations of parvovirus B19 myocarditis. Careful monitoring for these thrombotic events should be taken when diminished ventricular function is recognized, and the use of antithrombotic therapy should be considered to prevent these potentially catastrophic events.