The arterial switch operation (ASO) is the regular procedure to correct D-transposition of the great arteries (D-TGA) with intact ventricular septum (IVS) in the first 21 days of life. We describe 2 cases where ASO was performed in late-presenting D-TGA with IVS. In both cases, despite a short preload time of left ventricle (LV) training due to complications, ASO was performed. Correction was successful, without requiring heavy postoperative support.Patients with late-presenting D-TGA with IVS may undergo ASO, even after a short first-stage period.

To correct D-transposition of the great arteries (D-TGA) with intact ventricular septum (IVS), arterial switch operation (ASO) [1] in the first 21 days of life before deconditioned LV [2] is standard surgery. After 3 weeks of life, LV retraining can be achieved by pulmonary artery banding (PAB) (increased afterload) or/and a systemic-to-pulmonary artery shunt (increased preload and pulmonary arterial pressure), if atrial septal defect (ASD) is not too large [2,3]. Direct ASO and LV retraining on extracorporeal membrane oxygenation (ECMO) support is a method of choice as well.

We describe 2 infants with D-TGA with deconditioned LV function who successfully underwent ASO.

A 3-month old girl, with D-TGA, IVS and atrial septostomy/Raskind at day 6, was transferred to our hospital. Transthoracic echocardiography (TTE) showed D-TGA with banana-shaped LV, and a 6mm ASD with bidirectional shunt. Table 1 shows an overview of the LV parameters.

After placement of a right modified Blalock-Taussig shunt(mBTS)(Gore-Tex®,4mm) via sternotomy, arterial saturation increased from 70% to 82%.

A 9-month old boy, with D-TGA and ASD, small LV and dysplastic TV was referred. A right mBTS(4mm) placement via sternotomy was made with increased O2 saturations up to 85%.

Replacement of mBTS and surgery for complex TV repair was performed. Weaning from CBP was not possible with severe systemic RV dysfunction, worsening of MV regurgitation. A complete correction by ASO was considered and performed, with successful weaning from CPB. Levosimendan (Simdax®, Orion Pharma, Zug, Switzerland) was required to improve LV function (Figure 1) allowing extubation of the patient. 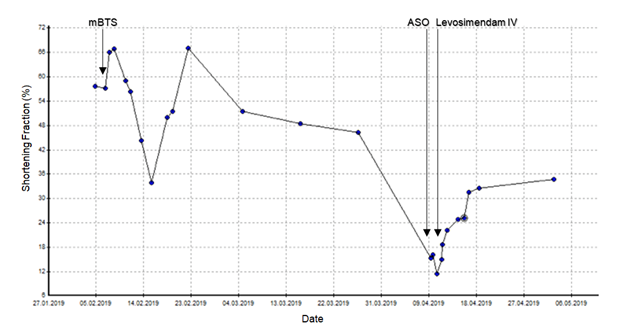 Delayed presentation of D-TGA with IVS remains extremely challenging, resulting in high morbidity/mortality cases. In our center, we consistently choose to go through 2-stage repair, LV retraining then ASO, because of better post-ASO LV adaptation, as described in previously published results [4].

These 2 cases show unfavorable evolution after LV retraining procedure. Hemodynamic and metabolic complications, while leading to urgent ASO to be performed, still contributed to LV retraining by increasing the afterload (increased pulmonary resistance due to hypoxemia and metabolic acidosis).

Even if the systemic-to-pulmonary shunt was patent for a short time, this still allowed an improvement in LV preload, contributing to the heart’s contractile elements as stated by Starling’s Law. No evidence could support these latter assumptions. The effective result of case 1 contrasts with the more progressive evolution of case 2.

In these 2 cases, we hypothesized that performing ASO in late-presenting LV, despite short preload time, remained possible.

A few days of a systemic-to-pulmonary shunt, which must be functional to improve LV preload, stretching myocardial muscle fibers, contribute to obtain a higher contractile LV function.

Patients with late-presenting D-TGA with IVS and small LV may undergo ASO, even after a short first-stage period, in a high expertise center.