Introduction: Cardiovascular diseases cause approximately 46% of total deaths in Ireland. These conditions can be preventable with lifestyle changes. By 2020 the number of deaths is expected to rise to over 195,000 people. With the aim, to develop teaching programs about CVD, it is important to assess young peoples' understanding of CVD.

Methods: This was a cross-sectional questionnaire-based research study conducted in seven pharmacies in south Dublin. Customers aged between 18-30 were requested to take part in the study. Descriptive and variable provision multivariate analysis was used in information analysis.

Results: The least recognized symptom of a myocardial infarction was dyspnea (69%). The least recognized symptom of stroke was headache (65%). In terms of where young people obtain health information, 66% learned from doctors, while family members and the internet were the main source in 18% and 17%. 35% of young people believed weight was the most factor that increased your risk of cardiovascular disease while 22% believed smoking was most important.

Discussion: There was deficiencies in cardiovascular disease knowledge among young people, especially related to MI/Stroke.

The social and environmental causes of CHD and stroke have been identified, and educational population-based prevention programs could result in a significant decrease in CVD morbidity and mortality [4]. Knowledge about CVD and its modifiable risk factors is a vital prerequisite to change a patient's health attitudes, behaviours and lifestyle. An understanding of the knowledge of CVD among young people and the sources they use for information would enable the development of effective programs.

A descriptive, cross-sectional survey was undertaken in a small community pharmacy in a south Dublin Ireland with an estimated population of 265,350 people [5]. The survey was undertaken during the period from January 2014 to July 2016. Ethical Approval was obtained from the Royal College of Surgeons In Ireland. Customers aged from 18-30 attending the pharmacy were requested to take part in the study. Customers were given the questionnaires, which were completed anonymously and returned to the pharmacy after completion. Data was then inserted into a data-book. Data was stored in the pharmacy controlled drug safe for use by the study researchers only. Exclusion criteria were ages less than 17 or above 30 years and health care professionals.

A scoring system was applied to measure the respondents' knowledge. Knowledge scores were categorized for each section as low [2], moderate [3,4] and high [5]. Customers were also asked where they obtained most of their health information, whether from doctors, family, friends, media sources or other health professionals. Univariate logistic regression was performed to determine the relationship of each independent variable with the overall knowledge of CVD. All variables with p <0.25 in the univariate analysis were used in the multiple logistic regression analysis to determine the factors that are associated with CVD knowledge. 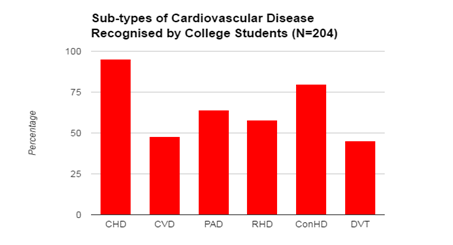 The knowledge about CVD was significantly greater among females compared to males (p= 0.022). The study participants were found to be more knowledgeable about CVD if they reported attending high education (p= 0.036), eating a healthy diet everyday (p <0.02), and having a family history of CVD (p <0.02). 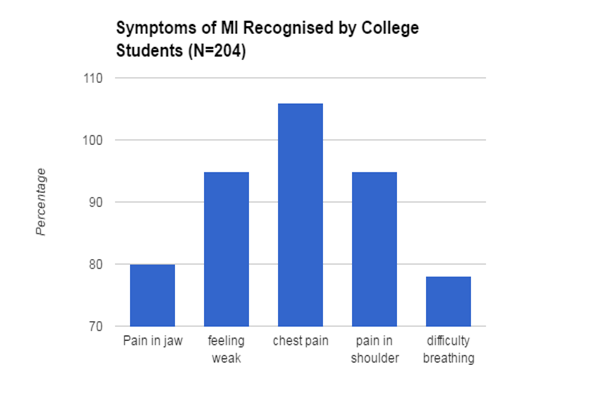 Of note there was a correlation between education level and knowledge, those with a college degree were 1.43 times more likely to recognize symptoms associated with stroke or MI (P=<0.05) (CI= 0.36-0.68). 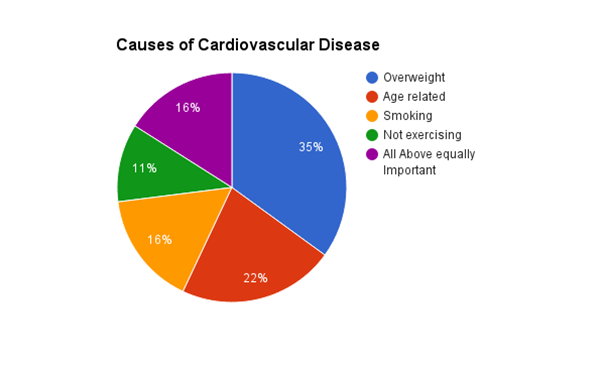 Figure 3: Most Useful ways to prevent cardiovascular disease as perceived by young people. 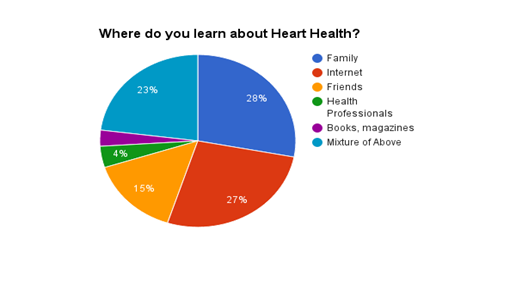 Young people learned about cardiovascular disease from various sources, the internet and family being the most important. 20 patients (18%) obtained health education primarily from their family while 19 patients (17%) used internet sources as their main source. Only 6 patients (5%) obtained most of their information from friends, 5 patients (4%) from allied health professionals. Those without a college degree were 1.34 more likely to get information from their friends (CI=0.44-0.56) (P=<0.05) and 1.64 from other health professionals (CI 0.34-0.78) (P=<0.05).

Chest pain was the most common known symptom 106 patients (95%) and shortness of breath by 87 patients (78%), which is higher than previous studies from North Ireland, Canada, Iran and Jordan [13-17]. Knowledge of stroke was much better with 100 patients (90%) able to name three or more symptoms of stroke most commonly weakness in the face (95%), trouble speaking (90%) and dizziness (90%). These figures were 10-20% higher than studies in Australia, Canada and the Gulf countries [9-12], but ~5% lower than that in the USA [18-20]. Factors independently associated with CVD knowledge. In the current survey, age, level of education, eating a healthy diet, and family history of CVD were found to be significantly associated with CVD knowledge (p <0.05).

71 patients (35%) felt being overweight was a cause of heart disease, Age was important in 45 patients (22%) while of note, smoking was seen as a contributor to cardiovascular disease in 32 patients (16%). This seems to indicate that young people do not understand the risk factors for heart disease or perceive that they are not at risk of cardiovascular disease considering that a large proportion felt that age was the most important risk factor.

Knowledge about CVD was significantly raised among females compared to males, which is an agreement with a previous study conducted in Iran and Korea [21-23]. 43 patients (38%) obtained health education primarily from their family while 30 patients (27%) used internet sources as their main source. Notably, only 17 patients (15%) obtained most of their information from friends, 9 patients (8%) from other health professionals.

This research highlights the importance of developing high quality education resources online for young people and their families to ensure positive health choices are made. Such educational resource should focus on helping young people understand the risk factors and types of cardiovascular disease.