Objective: Atrial fibrillation (AF) is the most common sustained cardiac arrhythmia in the elderly and a major cause of stroke. Compared to standard care procedures, prolonged Holter electrocardiogram (ECG) monitoring might increase detection of AF. We aim to determine the prevalence of paroxysmal AF (PAF) in elderly patients with increased stroke risk and without known AF, using prolonged Holter ECG monitoring in a primary healthcare setting.

Methods: Prospective study with a community convenience sample. Inclusion criteria: age ≥ 65 years, no known AF and at least one additional risk factor for stroke according to the CHA2DS2VASc score. Heart rhythm was determined by continuous 4 day Holter monitoring. The primary endpoint was the detection of AF (lasting ≥ 30 seconds and ≥ 10 seconds).

Results: Fifty patients, mean (SD) age was 72,9 (±5.2) years, were included. Thirty-six (72%) were female. Forty patients (80%) had at least two additional risk factors for stroke. Mean duration of monitoring was 93 hours. Atrial fibrillation was detected in 7 out of 50 patients (14%). Two thirds of arrhythmias were detected in the first 24h of monitoring. An additional 4% (2 incidences) of PAF were found by prolonging cardiac monitoring to 96 hours.

Conclusions: The prevalence of undiagnosed PAF in primary health practice is high. Most cases of PAF were detected in the first 24h. Holter ECG monitoring proved effective in detecting a considerable number of events and is well-tolerated, which would allow it to be used as a screening method.

Atrial fibrillation (AF) is the most common sustained cardiac arrhythmia, with a prevalence of around 10% in the general population over 80 years [1]. AF is one of the major causes of stroke, and ischemic strokes with AF tend to be more severe compared to other ischemic strokes [2]. However, AF can be largely asymptomatic (silent), [3]  and therefore undiagnosed. Indeed, one of the first clinical signs of AF is often an ischemic stroke [4]. Oral anticoagulation therapy is effective in lowering the risk of most thromboembolic complications associated with AF [3], thereby substantially reducing stroke-related mortality and disability. Thus, there is a need to better detect silent AF, particularly in the elderly population with an increased risk of stroke.

American and European guidelines defined by consensus that an AF episode lasts longer than 30 seconds [5,6]. However short-run atrial tachyarrhythmia events have been associated with an increased risk of stroke [7,8], and since 2014, the American Heart Association guidelines have omitted how long an episode should be to be formally considered an AF [9].

Recently, the risk/benefit of AF screening has been the subject of debate [10,11]. Observational study suggest that screen-detected AF responds to treatment similarly to that detected during routine care [12]. However, the most effective screening strategy is still unclear [10].

The primary aim of this study is to determine the presence of silent AF (paroxysmal or persistent) in otherwise healthy patients older than 65 with at least one additional risk factor for stroke, using 4 day Holter monitoring. As a secondary endpoint we aim to test the tolerability of this device in the elderly, but generally healthy population.

We designed a prospective study with a convenience sample from a primary healthcare centre. Participants were enlisted after invitation by their General Practitioner (GP) for an 11 months period. Inclusion criteria were: age ≥ 65 years; absence of known AF; absence of pacemaker or cardiac resynchronization therapy (CRT); no anticoagulant medication for any other reason; at least one of the additional risk factors for stroke (based on CHA2DS2VASc score): congestive heart failure, hypertension, diabetes mellitus, previous stroke or transient ischemic attack, atherosclerotic vascular disease, female sex. These risk factors were identified by consulting the clinical process and medical history of the patients.

Heart rate and rhythm were evaluated by radial pulse examination. In case of detection of arrhythmia an ECG – rhythm strip was performed to determine the presence of AF. Patients without AF or regular heart rate by pulse palpation, underwent a prolonged 4 days Holter monitoring, the results of which were interpreted by two experienced cardiology technicians.

The ethics committee approval was obtained, and all patients provided informed written consent prior to participation in the study.

The characterization of the studied population was performed with descriptive and inferential statistics (SPSS v21).

A total of 50 patients were enrolled. Thirty-six (72%) were female and the mean (SD) age was 72,86 (±5.2). All patients had rhythmic pulse at the first visit. Mean duration of monitoring was 93 hours. Two patients only had 2 days of records (due to battery failure), and another two had 3 days of records (one due to pruritus and another due to electrodes detachment).

With regards to additional risk factors for stroke (table 1): 92 % of patients had hypertension, 24% had diabetes, 4% had a history of stroke and 2% had had a previous transient ischemic attack. We did not identify patients with previous records of congestive heart failure or atherosclerotic vascular disease. In table 1, the epidemiologic characteristics and burden of risk factors per patient are indicated.

According to the CHA2DS2VASc score, all patients with PAF ≥ 30 seconds (n=7) had indication to start anticoagulation.  Moreover, three patients were referred to the cardiology clinic due to incidental findings by echocardiogram: two patients with aortic stenosis and one with a suspected ventricular septal defect.

Regarding tolerability, only one patient referred pruritus, which prevented the conclusion of the 4 day monitoring. Otherwise, despite referring to some irritation due to the prolonged monitoring, the device was well tolerated. 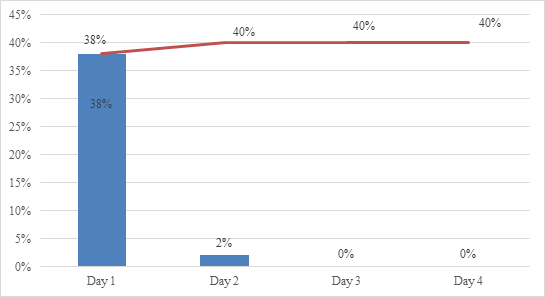 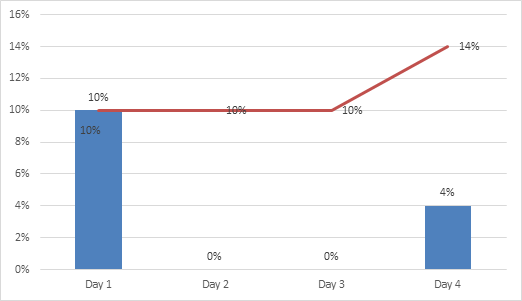 Based on the available literature, we expected Holter monitoring lasting 96 hours to be superior to the standard 24 hours monitoring. Indeed, in our study we detected an additional two incidences (4%) of PAF when Holter monitoring was prolonged from 24 to 96 hours. This constitutes an important finding as we could then start anticoagulation on these patients. Thus, despite the small sample size, we were able to report value of prolonged Holter monitoring.

PAF detection in our study was higher compared to a related Swedish study (14 % vs 9%), which used handheld ECG for intermittent, 20 to 30 second, recordings, also on an otherwise healthy elderly population [13]. Overall, our sample seems to be “healthier”, with less prevalence of congestive heart failure or previous stroke/TIA and without known AF, and their population was slightly older (75-76 years old versus our mean age of 72.86). Thus, continuous Holter monitoring may be more effective for detecting PAF than intermittent recording in this population.

Our study presents some limitations. Firstly, the CHA2DS2VASc score was calculated by consulting medical records and therefore some comorbidities could have been underdiagnosed. This study was also planned for a pre-defined period, and during this period only 50 patients were included. This sample size confers a lower statistical power, which decreases the strength of our conclusions. However, the value of pre-screening for AF in at risk populations is supported by a previous study [13], and the results are thus important for clinical practice approach.

The main strength of our study is that it was focused on the elderly population of a primary healthcare practice with risk of stroke but without previous thromboembolic events. Therefore, our approach of prolonged Holter monitoring could improve primary prevention. In addition, the population included in this study represents a common group attending primary healthcare practice, so is readily accessible. Only four patients could not complete the 96h monitoring (8%), therefore we conclude that this device was well-tolerated.

In conclusion, we detected that asymptomatic PAF is frequent in the primary health setting, especially in the elderly population with additional stroke risk factors. Holter ECG monitoring proved effective in detecting a considerable number of events and is well-tolerated, which would allow it to be used as a screening method.