Introduction: Methamphetamine use has been rising globally and results in significant morbidity and mortality. Methamphetamine is well known to affect multiple organs including neurological, cardiovascular, pulmonary, and renal. Cardiovascular manifestations like arrhythmias, pulmonary artery hypertension, cardiomyopathy, and cardiac arrest can occur from increased inflammation, myocardial fibrosis, and electrical remodeling.

Conclusions: This case emphasizes the temporal effects of drug overdose on the cardiovascular system and its life-threatening complications. It is aimed at raising awareness about consideration of methamphetamine abuse as an important etiological factor when evaluating patients presenting with left ventricular systolic dysfunction and the importance of cessation of drug usage leading to reversal of cardiomyopathy.

Methamphetamine affects the central and peripheral nervous system by its powerful, highly addictive stimulant effect. It is also known as meth, blue, ice, and crystal, among many other terms [1]. Deaths involving methamphetamines rose with a more than five-fold increase from 2012 to 2018 in young adults aged 25 to 54 years old [2]. There is a reported increase in overdose deaths by 35% due to methamphetamine psychostimulants in the United States for a 12 month period ending in May 2020 from its increased availability in the illicit drug supply and increases in methamphetamine-related treatment admissions during the COVID-19 pandemic [2, 3]. Methamphetamine is a psychostimulant that causes the release and blocks the reuptake of monoamine neurotransmitters, including dopamine, norepinephrine, and serotonin through various physiologic pathways. This leads to sympathetic overactivity resulting in various systemic complications like agitation, confusion, seizure, stroke, cognitive deficits and paranoia from its direct neurotoxic effects [4]. Cardiovascular complications are the leading causes of death among methamphetamine users, including malignant hypertension, arrhythmias, aortic dissection, myocardial infarction secondary to vasospasm, cardiomyopathy and sudden cardiac death [5]. Here we present a case of methamphetamine associated cardiomyopathy and severe systolic heart failure which reversed after cessation of methamphetamine use.

This is a 39-year-old male who presented with worsening shortness of breath and palpitations for 1 week. Patient was a chronic methamphetamine user for 18 years; last use was 1 week prior to presentation. He had a history of hypertension but was not on any medications. On presentation, blood pressure was elevated at 218/154 mm Hg and tachycardic with heart rate of 110 beats/min, oxygen saturation was 98% on room air. Physical exam was remarkable for bibasilar rales, bilateral lower extremity pitting edema extending up to the level of mid shins. Initial laboratory tests were significant for elevated B- type natriuretic peptide 2400 pg/ml, troponin 0.21ng/ml and creatinine 1.58mg/dl, urine drug screen was positive for amphetamine. Electrocardiogram (EKG) on admission showed sinus tachycardia, non-specific T wave inversions in V2-V3 precordial leads and left atrial enlargement. Chest imaging showed vascular congestion, cardiomegaly, and mild pleural effusion bilaterally (Figure 1). Echocardiogram showed diffuse left ventricular hypokinesis, left ventricular ejection fraction of 25-30%. There was moderate concentric left ventricular hypertrophy, dilated right ventricle with elevated right ventricular systolic pressure 56 mmHg suggestive of moderate pulmonary hypertension (Figure 2). 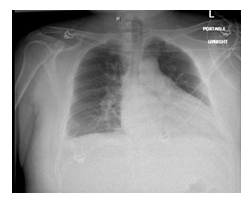 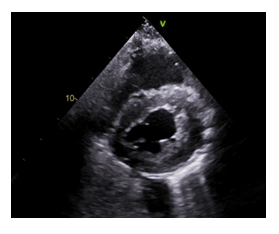 He was started on nicardipine drip for blood pressure control and transferred to the intensive care unit. Over the next 2 days, blood pressure remained stable, 140-150 mm Hg systolic but the patient was noted to be lethargic. Initial Computed Tomography scan head showed no acute intracranial hemorrhage or mass effect. Magnetic Resonance Imaging of brain showed foci of acute and chronic microangiopathic ischemic changes, cerebral angiogram was done which showed multiple stenosis bilaterally involving the anterior and middle cerebral artery territories suggestive of drug induced vasculopathy versus reversible cerebral vasoconstriction syndrome. Further course was complicated by multiple episodes of melena resulting in a significant drop in hemoglobin from 13 to 6 g/dl with worsening mental status, respiratory distress and hypotension. Henceforth, the patient was intubated and started on vasopressor support. Upper endoscopy was remarkable for gastritis and oozing duodenal bulb ulcer which was treated with epinephrine, pathology consistent with focal foveolar metaplasia, no adenoma or malignancy was identified. His troponins increased up to a maximum of 28ng/ml, EKG did not show any significant ST-T wave changes indicative of ischemia. Troponins eventually trended down to 7ng/ml after treating his anemia with 6 units of packed red blood cells and was thought to be secondary to demand ischemia. The patient was highly unstable for cardiac catheterization or to be started on heparin drip in the setting of acute bleeding hence was recommended outpatient follow up by cardiologist. Over the course of the next 5 days, his condition improved with goal directed medical therapy. His clinical status improved over 2 weeks after admission. Repeat chest imaging showed improvement in pulmonary vascular congestion as well as cardiomegaly as compared to initial chest imaging (Figure 3). Because of these imaging findings, we performed a repeat echocardiogram which showed significant improvement in left ventricular ejection fraction to 50-55%. Patient was sent home on goal directed medical therapy with instructions for cessation of methamphetamine use. 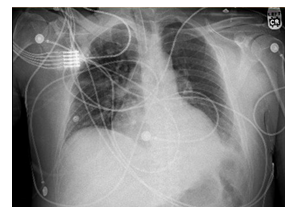 Methamphetamine is an extremely addictive drug, easily produced in makeshift laboratories and is one of the most abused drugs worldwide [1]. It is a potent sympathomimetic which causes an intense rush of euphoria and pleasure from its surge of dopamine release in the brain and elevated levels of intrasynaptic monoamine leading to multiorgan involvement [4, 6]. Our patient was a chronic methamphetamine user who demonstrated signs of acute systemic vasospasm likely due to increase in reactive oxygen species from its long-term use [4,5]. Multisystem involvement with neurological, gastrointestinal, renal and cardiovascular complications led to rapid decline in his clinical status. Endothelial activation in chronic drug user leads to increased inflammation, structural myocardial changes like fibrosis and electrical re-modelling which results in increased potential for arrhythmias [5, 7]. This eventually leads to dilated cardiomyopathy, heart failure, myocardial necrosis and/or recurrent coronary artery vasospasm from its catecholaminergic toxicity [5,7,8]similar to findings noted in our patient. There is limited evidence for duration after which the drug effects can be reversed with various studies reporting different time periods [9-11]. Some studies have reported profound harmful effects of methamphetamine on the cardiovascular system with irreversible damage using heart samples obtained at autopsy from 32 chronic meth users raising the risk of a sudden cardiac arrest and heart failure [12]. Table 1 shows a literature review of studies published online including a total of 60 patients showing cardiovascular effects of chronic methamphetamine use. While complete cessation of drug use along with guideline based medical therapy has been reported to provide partial improvement in cardiac function, continued methamphetamine use leads to ongoing heart failure and worse outcomes [13-15]. Our patient had findings similar to these studies which emphasizes the importance of aggressive medical management and cessation of drug usage which can reverse long term effects of methamphetamine use.

Devkota et al reported a case of a 38-years-old male who showed reversible methamphetamine associated cardiomyopathy after one week of medical therapy [9]whereas Baloch et al reported 47-years-old male with a history of chronic amphetamine abuse showing no improvement in heart failure symptoms after 3-weeks of intensive pharmacotherapy and was considered for heart transplantation [11]. This finding was different from our 39-years-old patient who showed improvement in heart failure symptoms after 2 weeks of goal directed medical therapy and cessation of drug use. Schrurer, et al. [13] included patients with severe systolic dysfunction seen on echocardiogram and concluded that improvement in cardiac function after cessation of methamphetamine abuse was independently associated with the extent of fibrosis whereas Pujol-Lopez et al. used cardiac magnetic resonance imaging as an alternative for endomyocardial biopsy and predicted recovery of the left ventricular ejection fraction by demonstrating the presence of late gadolinium enhancement [14]. Factors predicting early recovery were shorter duration of methamphetamine use, no evidence of myocardial fibrosis and smaller left ventricular size [10,12] whereas our patient who presented with significant cardiomyopathy showed clinical improvement after goal directed medical therapy despite being a chronic methamphetamine user.

Our patient demonstrated significant improvement of LVEF after 2 weeks of hospital stay even though he was a chronic methamphetamine user and had ongoing life-threatening systemic manifestations of a perfect meth storm in that duration. We can demonstrate that current evidence on MACM is very promising that recovery of cardiac function can be achieved with intensive medical management and abstinence from drug use. This case report provides a way forward that cessation of crystal methamphetamine abuse can lead to reversible cardiac changes and improvement in functional status of young adults in acute settings despite its long-term use.

Patient’s identity is not disclosed anywhere, and IRB or ethics committee approval was not required to publish this work. All procedures performed in studies involving human participants were in accordance with the ethical standards of the institutional and/or national research committee and with the 1964 Helsinki Declaration and its later amendments or comparable ethical standards.

Informed consent was obtained from individual participant included in the study to publish the manuscript.