Left ventricular pseudoaneurysms (LVP) are false aneurysms caused by the rupture of left ventricular wall as a complication of myocardial infarction, cardiac surgery, congenital heart disease, and, more rarely endocarditis. It is a rare condition that initiates 3-14 days are myocardial infarction affecting 0.5% of the patients. The known risk factors to develop LVP are age, history of hypertension, deficiency of collateral circulation after myocardial infarction, and female gender. The current case report describes LVP in a 58-year old male patient with frontal acute myocardial infarction history. The patient was diagnosed using ECG, CINE-MRI, DE-IR analysis, and thorax-CT followed by urgent cardiac surgery. The diagnosis was an apical pseudoaneurysm caused by previous myocardial necrosis. The Immunohistochemistry suggested cardiac fibrosis. The patient was discharged asymptomatic for angina pectoris, dyspnea and palpitations, and prescribed warfarin against clotting, β blocker/vasodilator, furosemide diuretic, angiotensin receptor blocker, and proton pump inhibitor medication. After six months of follow up, the patient demonstrated the absence of preoperative symptoms.

Left ventricular pseudoaneurysms (LVP) are rare perforations of the ventricular wall located at the pericardium, apical, and lateral regions of the heart. They are commonly caused by a delayed complication of myocardial infarction (four to seven days post-MI) or as a result of surgery, trauma, and endocarditis [1]. In contrast to a true aneurysm, which is caused by a weakness of the myocardial wall and affects all three layers of the myocardial wall, LVP is a result of a rupture of the wall forming a cavity with a narrow neck instead of a broad base frequently observed in true aneurysm [2]. The symptoms of LVP are unspecific presenting chest pain, dyspnea, or heart failure, therefore making the diagnosis challenging. Although in some cases LVP patients may be asymptomatic for years, the damage tends to progress rapidly, thus emphasizing the need for early diagnosis to avoid more severe clinical consequences, such as tamponade, shock, or sudden death of the patient [3].

Currently, the imaging techniques, e.g. echocardiography is used for the diagnosis. However, because none of the echocardiographic criteria is specific enough to accurately diagnose LVP, or to distinguish a real aneurysm from LVP, angiography, cardiac CT, and cardiac MRI are recommended in cases in which the condition of the patient is adequately stable [4]. LVPs appear in echocardiography anechoic or demonstrate accessory chambers close to the cardiac chambers and as a continuation of the left ventricle. Additionally, cardiac MRI or angiography with contrast medium of the laceration area and the extravasation in the pericardium space may help to distinguish LVP from a true aneurysm [5].

A 58-year old male patient with chronic ischemic cardiopathy was registered to the emergency department at the hospital because of dyspnea. The patient had had four months earlier a frontal acute myocardial infarction that showed sub-occlusive stenosis of the medial and apical intraventricular artery with small-caliber vessel and heterogeneous coronary collateral circulation. As an immediate therapy, the patient received a maximum dose of b-blocker bisoprololo 2.5 mg (Cardicor, Merck), furosemide diuretiuc 25 mg (Lasix, Pfizer), and a combination of cardioaspirin 100 mg (Bayer) and clopidogrel 75 mg (Clopidogrel, Bristol-Myers Squibb) to inhibit platelet aggregation. The patient had been using valproic acid 50 mg (Depakin, Deafarma) for epilepsy that caused dyspnea and palpitation despite given cardiac support medication. 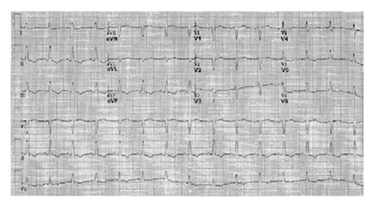 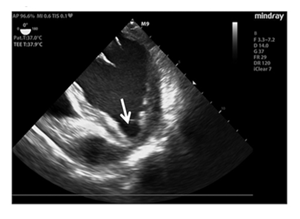 CINE cardiac magnetic resonance imaging (CINE-MRI) with gadolinium contrast agent to study myocardial contractility suggested markedly reduced thickness of the cardiac wall, akinesia of the apex in infarct region, and aneurysmal remodeling of the apex that correlated with a large pseudo-aneurysm cavity (Figure 3a,b). Delayed enhancement inversion recovery (DE-IR) late sequences indicated a transmural infarction in the entire apex that was associated with aneurysmal remodeling and a pseudo-aneurysmal pouch (Figure 3c-e). As a secondary observation thorax computed tomography (CT) scan demonstrated pulmonary nodulation at the antero-basal segment of the right lower lobe of the lungs. Blood test results were at normal range (data not shown). The diagnosis was an apical pseudoaneurysm caused by previous myocardial necrosis. 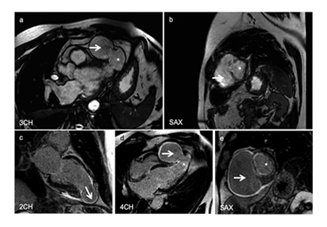 For the treatment of the LVP, the patient was subjected to surgery to remove the apical pseudo-aneurysm and surrounding scar tissue at the crest of the left ventricle (Figure 4).

Follow-up of the patient

After surgery, the patient was discharged in reasonable clinical conditions being asymptomatic for angina pectoris, dyspnea, and palpitations. The patient was prescribed warfarin 5 mg once a day (Coumadin, Bristol-Myers Squibb) against clotting, a “third-generation” β-blocking agent carvedilol 6.25 mg twice a day (Dilatrend, Roche) that has also vasodilator properties, furosemide (diuretic) 25 mg once a day (Lasix, Pfizer), angiotensin receptor blocker valsartan 160 mg once a day (Tareg, Deafarma), and proton pump inhibitor pantoprazole 20 mg once day (Peptazol, Recordati). The patient was encouraged to perform cardiorespiratory rehabilitation. Currently, at a six-month follow-up time point, the patient demonstrates a stable hemodynamic condition and compensation. The preoperative symptoms have reduced markedly.

Because LVP has a high risk of rupture causing the death of the patient and the prediction of the progression of the damage remains a challenge the early diagnosis with consequent immediate surgical intervention is crucially important. The surgical intervention is always recommended to the patients, even to those without symptoms [6] to prevent the enlargement of the pseudoaneurysm lesion. These procedures include a simple closure of the aneurysm neck, closure using pericardial tissue or synthetic graft material, or alternatively, complete removal of the pseudoaneurysm sac [6]. The untreated patients have a 35%-45% risk of enlargement and rupture of the lesion with mortal consequences, whereas the mortality rate decreases down to 23% in surgically treated patients [3, 7].

Fibrosis, which characterizes various pathological conditions as a response to injury, such as cardiac fibrosis, frequently arises from activated myofibroblasts. In general, fibrosis refers to pathological wound healing in which the activated myofibroblasts and their paracrine molecules replace the normal tissue subsequently affecting tissue function and inducing remodeling. The fibrotic response, initiated by e.g. inflammatory cytokines, transforming growth factor-beta (TGFb), int/Wingless (WNT1), or sonic hedgehog (SHH) signaling, progresses often in three phases spanning from initiating phase to effective phase and to amplificative phase [8-10]. Therefore, signaling molecules activating the fibrotic tissue development, such as the abovementioned TGFb, are potential drug targets and even tested in clinical trials [11, 12]. In cardiac fibrosis, the accumulation of extracellular matrix proteins may cause cardiac dysfunction by disrupting the collagen network consequently debilitating cardiomyocyte contraction that results in uncoordinated contraction of cardiomyocyte bundles [13].

In the current work, we report the diagnosis and the therapy of an LVP patient that had an acute myocardial infarction history. The diagnosis, the apical pseudoaneurysm, was based on the combination of ECG, CINE-MRI, DE-IR analysis, and thorax-CT. The pseudo-aneurysm and surrounding scar tissue were removed in open chest cardiac surgery. After a 6-month follow-up of the patient demonstrated markedly reduced preoperative symptoms.