Background: Newly introduced CZT camera has shown to reduce radiation without affecting image quality. Our goal was to assess the results of nuclear testing using the new CZT camera and traditional Na-I camera in comparison with standard coronary angiography.

Results: 162 patients underwent cardiac catheterization in the first quarter of year 2015 compared to 145 patients from the previous year. CZT camera had a higher sensitivity of 96.8 compared with 87.6 for the Na-I camera (P-value=0.011). The accuracies of the two cameras were 78.6 and 77.2 respectively.

Conclusion: The accuracy of identifying obstructive CAD using the CZT camera approaches 78.6% irrespective of age & sex compared to 77.2% using the Na-I camera. MPI with low dose protocol using the CZT camera is reliable in diagnosing CAD with the benefit of radiation reduction (approx. 48-50%) and reduced scan time without statistical difference in accuracy.

Coronary artery disease (CAD) is one of the leading causes of death in the United States. Stress testing using myocardial perfusion imaging (MPI) has been a great tool in the diagnosis and management of CAD. Single Photon Emission Computed tomography (SPECT) MPI has evolved as a useful non-invasive tool to diagnose and quantify the hemodynamic relevance of culprit lesions [1].

Recently the 21st century has seen technological advances with the newer Cadmium-zinc-telluride (CZT) camera, which gives precision and accuracy in capturing myocardial images [2]. The CZT detector works as a semiconductor with direct conversion of gamma radiation into electric signal. This mechanism results in better spatial resolution and sensitivity, what means lower administered dose of radiotracer along with reduced acquisition times. The commercially available CZT camera is discovery 530c SPECT which can detect more photons by incorporating 19 solid-state cadmium-zinc-telluride detectors arrayed around the patient, advanced reconstruction algorithms, collimator geometry designed to optimize photon detection. Spatial resolution was reported better with GE discovery (6.7 vs 8.6 mm) [3] This eventually allows up to 7-fold reduction in acquisition times combined with similar reduction in radiation dose [4].

Multiple studies have evaluated the effectiveness of various cameras in image acquisition; however, there is limited data on comparing the efficacy of MPI using the Na-I camera and CZT camera with the reference standard invasive coronary angiography (ICA). The aim of our study was to assess the accuracy of the imaging test with the results of ICA over a period of one year.

All patients who were referred for nuclear stress testing at our center over a one-year period were considered for enrollment in this single center retrospective observational analysis. After institutional IRB, data was collected in a password protected Excel spreadsheet to preserve privacy of the patient data. After reviewing 1200 patient charts, a total of 307 patients from the first quarter of two consecutive years were included. 145 patients underwent scans with Na-I camera and 162 had scans with the CZT camera. As the aim of the study was to compare the efficacy of the two cameras with the CZT camera used with a low dose protocol, only the patients who underwent pharmacological stress test were included. The exclusion criteria comprised of patients who had a diagnosis of ST elevation MI, Unstable angina/NSETMI at the time of presentation. Cardiac catheterization was performed for persistent symptoms or abnormal scans showing ischemia. Patients >300lbs were excluded from the study. Patient demographics including significant cardiac history in terms of previous history of CABG and PCI was reviewed are shown in Table 1. The distribution of obstructive coronary artery disease based on which vessels were involved in both subgroups is also highlighted in Table 1. 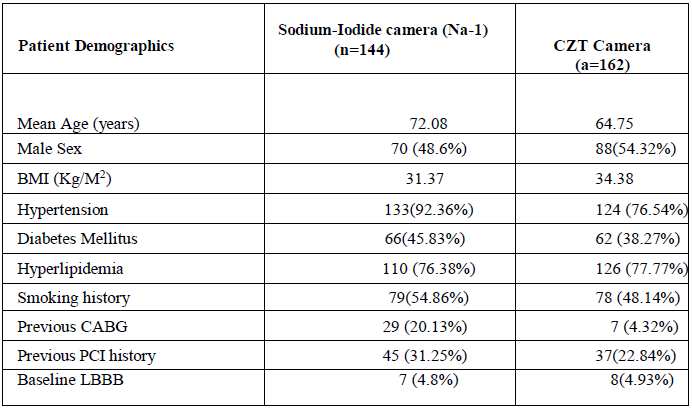 sestamibi at rest. As shown in Table 2, stress-imaging dose was 3 times the rest dose, approximately 25-35 mci. The scan acquisition times at these radiation doses was 12-15minutes and 9-12 minutes at rest and stress respectively. While using HE NM530c camera with 19 cadmium-zinc-telluride (CZT) detectors on the other hand, the radiation doses given were 5-6 mci and 15-18 mci respectively. The images were then reconstructed and analyzed on a GE healthcare workstation. The nuclear stress test results were reported as low, intermediate or high risk based on ischemia, infarct/scar and left ventricular ejection fraction (Table 3). In view of new CZT technology for our center, it was decided to follow patients with abnormal stress testing and or worsening symptoms despite the low risk scan upto a year if they had ICA. On coronary angiography, as per cardiac catheterization report, obstructive coronary artery disease was defined as >70% obstruction in the epicardial coronary arteries. Retrospectively, FFR being a newly introduced tool for objective measurements, was used in a limited percentage of these patients and hence, to maintain uniformity throughout both groups, angiographic results were used instead of FFR to define obstructive coronary artery disease.

Table 2: Radiation dosages of sestamibi in patients undergoing stress testing with the Na-­?I and CZT cameras.

Numbers and percentages and means and standard deviations were calculated and reported for descriptive statistics for our study sample. The Breslow Day test was used to compare homogeneity for accuracies between camera types and a comparison between two proportions of true positive results was conducted using the Pearson’s Chi-square test statistic. A P-value of 0.05 was used as the threshold for statistical significance. SAS 9.4 (Cary, NC) was used to conduct the statistical analysis. 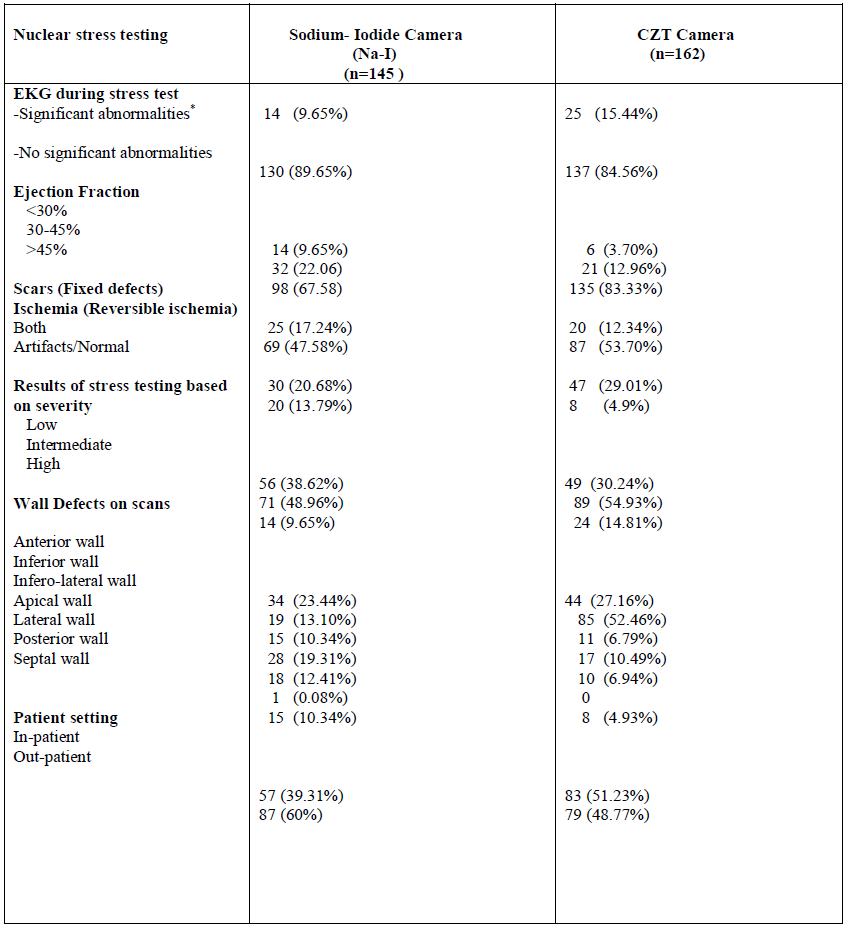 Based on weights, the patients were divided into <250Lbs and 250-300Lbs. patients >300lbs were excluded. 162 patients in the CZT group and 145 in the Na-I group underwent invasive coronary angiography (ICA). The accuracies of the two cameras were 77.2% for Na-I and 78.6% with the CZT camera. Comparison of camera accuracies between Na-I and CZT groups indicated no significant difference (Breslow Day test, p=0.800). The sensitivity as calculated with the Na-I camera was 87.6% (95% CI=0.80,0.93) whereas that with CZT camera was 96.8% (95%CI=0.92,0.99), (Table 4). Comparison of sensitivities using Pearson’s Chi-square test statistic indicated a statistically significant difference (p-value=0.008). A post hoc power analysis was conducted, resulting in a power of 0.761 for a chi-square approximation with a two-sided significance level of 0.05 and a group sample size of 121, when the proportions were 0.97 and 0.88. The average acquisition times for our study were 8 min and 5 min respectively with rest and stress for CZT camera compared to 15 min and 12 mins for the Na-I subgroup.

The availability of HE CZT cameras offers the potential to reduce radiation in nuclear stress testing [5]. In nuclear imaging the trade off between noise level and image acquisition time has determined standard protocols and scan times

Exposure to radiation from medical procedures is one of the most important concerns in modern day clinical practice. ASNC information statement on radiation dose reduction recommendations in 2010 suggested that by 2014 an average daily reduction in radiation exposure should be achieved to <9mSv in at least 50% MPI studies. However, a 2013 analysis report by the International Atomic Energy Agency (IAEA) showed that only 30% of laboratories worldwide had a median effective dose of < 9mSv [6]. Methods at reducing radiation dose and shorten the test duration include use of: high efficiency (HE) CZT cameras, new iterative half-time software on conventional cameras, iterative reconstruction algorithms as well as new stress first protocols. Individually or combination of these have assisted with achieving this goal of radiation reduction [7]. This is helpful in preserving the principle of As Low as Reasonably Achievable (ALARA).

As per Duvall et al., CZT SPECT imaging has a higher sensitivity and accuracy for detecting obstructive CAD compared to the standard SPECT camera. The study demonstrated sensitivity of 91.7% with a relatively lower specificity from 53-100% [8]. Previously, Nakazato et al performed a direct comparison assessing the efficacy of CZT SPECT MPI with coronary angiography, which included a total of 56 patients. In their study, coronary angiography was performed within 6 months of the CZT SPECT MPI excluding patients with history of valvular heart disease, CAD and patients who were symptomatic with complains concerning for CAD. This study demonstrated sensitivity of 88% to 94% with a specificity of 59% to 86%. [9]. Our study demonstrated a sensitivity of 96.8% with the CZT camera and 87.6% with the Na-I camera. There have been discussions in the past debating the ‘true gold standard’ in detecting the extent of disease in patients with CAD. A genuine consideration has been given to analyze anatomic and physiologic aspects of assessment using combination of MPI and cardiac computed tomography [8].

Conventional SPECT cameras have higher sensitivities ranging 63-87%. Whereas, their specificity is lower and can vary from 36.9% to 55.6% [10]. The assessment of specificity is problematic because patients with negative perfusion imaging are usually not referred for coronary angiography [10]. Recently published meta-analysis by Nudi et al showed that CZT camera has a higher sensitivity (84%), however the specificity was lower at 69% and also revealed that approximately 1/3rd patients had false positive studies due to obesity and breast attenuation artifact [11]. Given the higher sensitivity with the new HE camera, the acquisition times for our study were 8min and 5min respectively with rest and stress thus enabling improved patient tolerance and reduced incidence of termination of tests for reasons like intolerance and claustrophobia. Post-testing analysis of the radiotracer syringes used in imaging for CZT camera revealed that approximately 1-3mCi-tracer amount was still left in the syringe after the injection. This may imply that our patients actually received less than reported radiation during the stress test.

All patients who underwent ICA had abnormal MPI scans. Since, ethically those who had low risk or normal perfusion without any ongoing symptoms were not subjected to undergo ICA, true specificities could not be calculated in our study and are lower than reported in other studies for the same scanning cameras. This may lead to an inevitable selection bias as far as specificities are concerned. As, the aim of the study was to evaluate radiation reduction and compare accuracy of imaging; patients with exercise MPI were not included as a part of analysis. Another reported limitation of our study and the CZT camera is having small field of view (FOV) with approximately 19cm diameter making it difficult to obtain a good position of the heart in FOV in this obese subgroup of patients [12]. Hence, our study was limited to patients < 300lbs. ICA performed used angiographic means of classifying lesion severity and not FFR/iFR. Although not frequent, the possibility of false negatives still remains, as in cases of balanced ischemia. Therefore clinical symptom correlation is recommended despite use of HE CZT camera.

In a group of population undergoing SPECT MPI, CZT camera demonstrated equivalent accuracy and higher sensitivity compared to the traditional Na-I MPI. There was also an added advantage of radiation reduction of up to 48-50% between two groups, which further demonstrates the efficacy of the CZT camera to be as accurate even at a lower radioisotope tracer dose.

Competency in Medical Knowledge: Diagnostic ability to detect CAD using SPECT perfusion imaging with standard NA-I camera is well established. Newly available CZT cameras are highly efficient thereby reducing the radiation dose and the time to do the test for patients without affecting the accuracy of the test. However, studies have suggested reduced specificity.

The authors would like to thank Roma Mehta for assistance with data collection.

The authors declare that there is no conflict of interest regarding the publication of this paper. There was no funding associated with the study.