Background: Coronary artery disease (CAD) remains the number one cause of death worldwide. Chronic total occlusion (CTO) are defined as 100% occlusions with TIMI (Thrombolysis in Myocardial Infarction) 0 flow with at least a 3-month duration, observed in 15-30% of patients undergoing cardiac catheterization. Despite the high incidence of CAD, with the vast majority of patients carrying a high risk factor burden and co-morbidities, there is paucity of data regarding CTO in Saudi Arabia. , It is therefore of extreme importance to understand this challenging type of CAD.

Aim: To explore the clinical characteristics and outcome of patients with CTO undergoing cardiac catheterization.

Method: We collected data for all adult patients (age > 18 years) with a diagnosis of CTO who underwent coronary angiography at the Cardiac Catheterization Laboratory at King Abdul-Aziz Cardiac Center between January 2010 and December 2017 from electronic databases. We compared clinical characteristics and outcome of patients who underwent successful recanalization versus an unsuccessful outcome. The primary outcome was defined as mortality following the procedure. Secondary outcome was defined as MI, stroke or acute kidney injury as well as CABG required. Results are expressed as mean±SD or median, p<0.05 considered significant. Wilcoxon Rank Sums test for continuous and chi-square for categorical data.

Conclusion: To the best of our knowledge, this is the first CTO study in Saudi Arabia. Our results are generally in agreement with published data indicating that CTO is more prevalent in older men with a higher risk burden and located mostly in LAD. Our success rate for CTO PCI is comparable with current literature and shown to improve 30-day outcome in these patients.

Coronary artery diseases (CAD) remains the number one cause of death worldwide. It is estimated that 15,400,000 Americans have a diagnosis of CAD, 7,800,000 of whom have stable and 7,600,000 histories of acute myocardial infarction (AMI) [1]. The Framingham Heart Study showed that the lifetime risk for the development of symptomatic CAD is 49% and32% after 40 years of age for men and women, respectively. In 2010, CAD was the single most frequent cause of death in American men and women; it resulted in more than one in six deaths in the United States and estimated costs incurred at $204.4 billion. It is expected that the rate of CAD will only accelerate in the coming decades due to the escalating prevalence of obesity and type 2 diabetes, rise in cardiovascular risk factors in the younger population, and adoption of a Western lifestyle in the developing countries. It was revealed by The World Health Organization (WHO) that by 2020, the global number of deaths from CAD could rise to 11 million from 7.6 million in 2005.

Coronary arteries are no longer viewed as inanimate tubes but are characterized by a predilection for atherosclerosis due to a combination of high levels of circulating cholesterol, endothelial dysfunction, oxidative stress, and vascular inflammation. Atherosclerosis manifests itself mostly as plaque formation, leading to stenosis, but curiously some individuals may develop ectasia instead. The atherosclerotic plaque leads to coronary artery stenosis, which, once significant, can seriously jeopardize coronary blood flow.

Plaques undergo extensive outward remodeling for many years before it starts to impinge on the lumen. Eventually, the  stenosis may progress to the degree that impedes blood flow through the artery. Lesions that produce  stenosis of greater than 60% can cause flow limitations under conditions of increased demand. This type of athero-occlusive disease commonly produces chronic stable angina. Critical  stenosis cause AMI and high-grade  stenosis bar; some exceptions are more likely to cause an acute coronary occlusion than non-occlusive occlusions.

A true chronic total occlusion (CTO) is defined as stenosis within which there is neither a continuously visible lumen nor any visible flow that cannot be accounted for by collaterals (thrombolysis in myocardial infarction [TIMI] grade 0), known to be present for three or more months or a newly documented occlusion not attributable to a similarly recent ischemic event.

Functional or subtotal occlusions are those with a trace antegrade lumenal flow (TIMI grade 1).

Pseudo-occlusions are those with a residual lumen but without antegrade flow due to competing for collateral flow.

Spontaneously recanalized CTOs are sometimes identified wherein a long, tortuous microchannel exists within the presumed architecture of a previous occlusion. Functional and pseudo-occlusions overlap in practice and may be difficult to distinguish from a true CTO unless imaged with dual-catheter angiography or probed with a guidewire [2].

CTOs are a challenging, complex and not uncommon angiographic finding, accounting for 15% to 30% of patients who undergo cardiac catheterization [3,4].

Recanalization success depends on the duration and length of occlusion and presence of bridging collaterals. Total occlusion also constitutes a major reason for referral of patients for CABG.

In recent years, the difficulty in managing CTO cases has lessened with growth in scientific evidence and development of innovative interventional techniques, but geographic differences are quite significant.

There were 88.9% of patients achieved initial angiographic success. A Kaplan–Meier survival curves showed that cumulative all-cause death was significantly lower in the success than in the failure group (p = 0.0003 with no difference in the duration of follow-up. Moreover, the cardiac mortality was significantly lower in the successful group than in the failure group (3.5% vs. 15.9%, p < 0.0001). The study suggested that successful revascularization in patients with CTO did their long-term clinical outcomes [5].

Another interesting retrospective study studied the relationship of age with outcome post-intervention in CTO cases; they compared subjects aged ≥75 years to those aged <75 years and showed no significant differences between the two groups in terms of the incidence of procedural complications. However, in the older group, a comparison between the patients with successful and failed PCI revealed significantly better 3-year cardiac survival (97.6% vs. 76.9%, p = 0.005). The 3-year cardiac survival of those with successful PCI was similar to that observed in the younger group [6].

Another study explored gender differences in outcomes after coronary stenting in patients with chronic total occlusions (CTO) who underwent percutaneous coronary intervention (PCI) They showed that recanalization of coronary arterial CTO is equally successful with both women and men [7].

Another study done in the US on 172 patients with a CTO, success was obtained in 74% of lesions. The study showed non-fatal Q-wave myocardial infarctions or deaths occurred in hospital. There were 1.6% of patients required repeated percutaneous coronary interventions in whom the CTOs were initially opened.

There were 6.7% of patients experienced perforation during the initial failed attempts. Only one patient needed operative repair.

After two years of follow-up as an average period, similar incidences of cardiac death and nonfatal Q-wave myocardial infarctions were found among patients performed successful procedures and those with failed procedures (p = 0.3). Target vessel revascularization was required more frequently for patients with successfully opened arteries, with no significance in results (18.8% vs. 0%, p = 0.06), The authors concluded that 2-year mortality or nonfatal Q-wave myocardial infarctions weren't reduced in successful recanalization compared with patients with failed procedures [8].

Despite the high incidence of CAD, not much is known about CTO in the context of Saudi Arabia, where the vast majority of patients have a higher risk factor burden and co-morbidities than their Western counterparts. It is of extreme importance to improve our understanding of this uncommon and challenging type of obstructive CAD. This study was conducted to assess the clinical characteristics and clinical outcomes of patients with chronic total occlusion in undergoing cardiac catheterization.

All patients who underwent PCI at the national guard tertiary center, KSA.

Our estimation for our sample size in that specific period is around 100-400 patients.

All patients with documented single CTO in a main coronary artery between the years 2010 and 2017 will be included in the study.

Data collected will include

Vasoactive Medications used at the time of the Cath procedure

Laboratory tests done within 3 months of the procedure: TSH, Liver profile, BNP (Apollo Lx, Best Care) We will classify patients into two groups: those with successful CTO-PCI and those with failed CTO-PCI.

The following endpoints will evaluate to compare patients with a failed versus a successful procedure: Success, major cardiac adverse events (MACE) and subsequent CABG

A CTO is defined as a stenosis within which there is neither a continuous visible lumen nor any visible flow that cannot be accounted for by collaterals (thrombolysis in myocardial infarction [TIMI] grade 0), known to be present for 3 or more months or a newly documented occlusion not attributable to a similarly recent ischemic event.

Figure 2: Success rate regarding Prior CABG and CKD 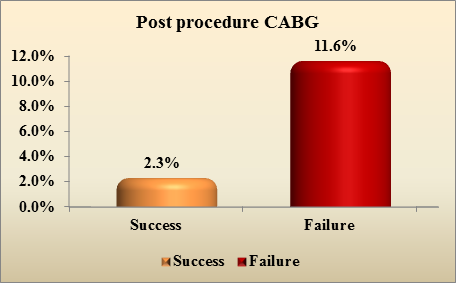 In this study we included 173 patients, whose age range was 36-85 years old. We aimed to investigate the successful of revascularization and the rate of mortality over different time intervals. In one study [5] it was suggested that successful revascularization in CTO patients improves the long term clinical outcomes, where the rate of death regardless the cause was significantly lower in success group than in failure group, moreover the successful group experienced lower rate of cardiac death than failure group, the rate of cardiac death was significantly lower in success group. Another study [9] reported long term survival of successful CTO PCI out of 5 years, also prior CABAG and PCI were significantly more frequent among patients with unsuccessful procedure.

A more recent study [10] found that successful recanalization rate was 47.9% and it was associated with functional improvements and lower mortality rate.

In the present study, the successful rate was 50.3% which was lower than the rate reported in the previous study [10]. In this study, we found that short term improvements were achieved during 30 day to 6 months, where the 30 days mortality was 1.2% and the 6-months mortality was 1.7%, however the long term improvements were lower during 1 year where 1 year mortality rate increased to 5.2%.

In a recent Indian study [11] it was found that the successful rate was 87%, which was higher than our rate, moreover, it was found that immediate and long term clinical outcomes were better with lower MACE after successful procedure, the peri-procedural mortality rate was less than 1%, whereas the non-life threatening complications were 4%. The 30 day mortality in our study was 1.2%, then increased to 1.7% for 6 months and for the 1 year, the mortality rate reached 5.2%.

To the best of our knowledge, this is the first study in Saudi Arabia, to improve our understanding of a challenging lesion such as CTO. Our results are generally in agreement with published data indicating that CTO is more prevalent in older men with a higher risk burden, prior cardiac history and located mostly in LAD. However, our findings also indicate that females are less likely to undergo successful lesion crossing which may be at odds with published data, although successful recanalization was not related with gender. Our success rate for CTO PCI is comparable with current literature and shown to improve 30-day outcome in these patients. While CTO is a challenging angiographic diagnosis, our excellent results indicate high level of procedural skills despite adverse profile of Saudi patients.