The recent article by Fontaine et al. about the recording of Epsilon waves on a loop recorder deserves some additional comments [1].

Epsilon waves have been identified on the “REVEAL” Medtronic Loop recorder memory even though there are no Epsilon waves visible on the standard ECG. Therefore, figure 1 of the EUROPACE article, shows a typical ECG of a patient with ARVD in which several leads are amplified and with high speed recording. Precise vertical lines of measurement to stress the difference between the right as compared to left precordial leads. This is crucial to the interpretation of Epsilon waves in ARVD but was not considered in the recent publication by Platonov et al. [2]. The increased sensitivity of the loop recorder is due to the “proximity” effect of the leads being closer to the heart, as the Fontaine Lead System [3]. In addition, the bipolar electrodes of the loop recorder with a short distance between these electrodes (6 cm) is more sensitive than unipolar precordial leads.

Myocarditis and ARVD are included in the title of the paper. The combination of these two diseases was suspected for the first time and reported in Japanese [4], as well as in a French journal [5]. This was because the Japanese pathologists were aware of the intricacies of myocarditis especially when this pathology is superimposed on a structural heart disease [6,7]. The same concept of superimposed myocarditis on a genetic disease is applicable to other cardiomyopathies such as Brugada syndrome (Bs), hypertrophic cardiomyopathy (HCM), idiopathic dilated cardiomyopathy (IDCM) and probably in all forms of inherited cardiomyopathies including the WPW syndrome [8].
Repeated episodes of myocarditis leading to irreversible heart failure looks common at the end stage of the disease [9].  It is also clear that ventricular arrhythmias can be triggered by inflammation (myocarditis) with an increase of C-reactive protein (CRP) as reported by Bonny et al in patients with ARVD [10] and in the Brugada syndrome [11]. Finally, a common genetic factor in the cardiac development and an increased susceptibility for myocarditis has been recently demonstrated by Lopez-Ayala et al. [12].

The subtitle of the loop recorder article [1] indicates an updated definition of the Epsilon wave in ARVD stressing that Epsilon waves can exist in other types of cardiomyopathies such as Coronary Artery Disease (CAD), IDCM, HCM, sickle cell disease, etc. as well as the pure form of a localized form of myocarditis which may explain a QRS complex prolongation observed on one or few precordial leads.

The comprehensive definition of an Epsilon wave in ARVD is immediately available in the abstract of the loop recorder article [1].

The loop recorder electrodes are similarly placed to those of the “Fontaine lead system”, recently published in ARVD [13,14]. The loop recorder has been primarily designed to record arrhythmias. In this case palpitations and dizziness in a patient with repeated episodes of clinical acute myocarditis showed that ventricular tachycardia was well documented by the loop recorder.

However, signal analysis for postexcitation waves is a new application of this device which can be extended to other electronic apparatus that records electric signals of the heart such as a subcutaneous defibrillator, pacemakers and automatic implanted cardiac defibrillators (AICD). It is interesting that a new case from La Salpêtrière, Paris, France was identified when the EUROPACE paper was in review and published independently [15].

Signal averaging techniques were introduced in cardiology in a book chapter by the author from basic neuroscience in 1977 [16]. This method proved highly sensitive for the detection of late potentials and this proved to be a new risk factor for possible development of an arrhythmogenic substrate that can be prevented or treated by appropriate devices such as ICDs or by the life-vest.

The concept of atrial dysplasia leading to the proposal of a pandysplastic phenomenon in ARVD is also suggested in a figure of the Europace paper [1]. The measurements of P wave duration in 28 ascertained ARVD patients was 169 ± 62 80-260 ms (normal <120ms), P < 0.05. In fact, it is possible to see by signal averaging that ARVD patients have further abnormal wave signals due to latent atrial dysplasia (Figure1). 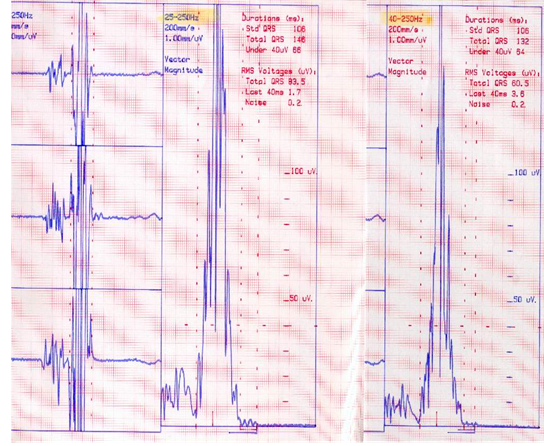 Figure 1: Male 37. Dizziness during soccer and Ventricular Tachycardia 220 bpm with RBBB. ECG was normal, but SAECG shows the Epsilon waves. Note the delayed potentials with very low frequency signals at the end of atrial signal better seen with the filtering of 25-250 Hz as compared with 40-250Hz. This can be explained by the relatively flat structure of atrial myocardium preventing unopposed electrical forces as compared with ventricular myocardium.  Also note the atrial late activation on the “Z” lead as opposed to the “Y” lead on the Frank lead system. ARVD was ascertained by contrast angio. No atrial arrhythmia was observed.

The presence of atrial electrophysiological abnormalities in ARVD patients has been suspected by the high frequency of atrial fibrillation (80%) in this population. However, the histologic demonstration of this phenomenon needs to be documented. In addition, as the quiescent form of ARVD is found in 3.7% of the general population, we have a new explanation on the mechanism of AF in human [17,18].

Finally, the all scientific material on Epsilon waves published by GF (8 chapters for books and 2 peer reviewed articles) are presented and precisely classified chronologically to demonstrate the progressive understanding of Epsilon waves based on intramyocardial blocks producing the “postexcitation” phenomenon [1].