Objective: To assess the correlation between HR-VWI and QSM findings and define an optimal cut-off for aneurysm wall enhancement based on the presence of MBs. Methods: Patients with UIAs prospectively underwent QSM and HR-VWI. UIAs were deemed unstable when MBs were identified on QSM. The contrast enhancement ratio between maximal signal intensity values measured in the aneurysmal wall and the pituitary stalk (CRstalk) on T1 post-contrast images was calculated. Multiple t-tests were computed to assess the correlation between morphological variables, PHASES scores, CRstalk, and presence of MBs. A ROC curve was plotted to determine the best CRstalk cutoff to differentiate stable from unstable UIAs.

Conclusion: There is a strong positive association between aneurysmal wall enhancement and presence of MBs. CRstalk ≥ 0.55 may be used as a surrogate biomarker of aneurysmal instability in clinical practice.

High-resolution vessel wall imaging (HR-VWI) has recently surfaced as a potential tool to assess the rupture risk of unruptured intracranial aneurysms (UIAs). A first report by Matouk et al. retrospectively applied HR-VWI in 5 patients with multiple intracranial aneurysms who had suffered subarachnoid hemorrhage (SAH). They demonstrated that avid aneurysm wall enhancement (AWE) was always detectable in the culprit ruptured aneurysms [1]. Further studies have associated AWE with clinical features of instability, including larger size [2-4], location in the posterior communicating or posterior circulation arteries [2], and irregular shape [5, 6]. Moreover, histopathological analyses have demonstrated that avid AWE correlates with increased levels of inflammation in the aneurysm wall, such as lymphocyte infiltration [7], active macrophage infiltration [8, 9], higher myeloperoxidase activity [10], decreased elastin [9], neovascularization [11], and vasa vasorum disease [8, 10]. All of these studies have suggested that AWE of UIAs may be used as a biomarker of instability. To date, two prospective studies have demonstrated a positive association between AWE and aneurysm instability over time. Vergouwen et al. analyzed 57 patients with 65 UIAs. After a median follow-up of 27 months, 4/19 UIAs with AWE became unstable: 2 grew and 2 ruptured. On the other hand, all 46 UIAs without AWE remained stable throughout the study [12]. Gariel et al. analyzed 129 patients with 145 UIAs. Over a 2-year period, 12 UIAs grew: 8 showed increased AWE during follow-up and 4 had preexisting AWE visualized at baseline. In the remaining 133 stable UIAs, no AWE modifications were found [13].

Quantitative-Susceptibility Mapping (QSM) is a distinct MRI sequence specifically developed to quantify tissue magnetic susceptibility [14]. QSM is widely used to quantitatively measure the non-heme iron content of different brain structures in pathologies such as cavernous malformations, multiple sclerosis, and Alzheimer’s disease. Based on this premise, Nakagawa et al. used QSM to assess presence of microbleeds (MBs) in the wall of 20 UIAs harbored by 16 patients. Clinical presentation in 4 of the patients (two of whom had 2 aneurysms each) met the typical definition of sentinel headache, whereas the remaining 12 patients had migraine headache. Interestingly, QSM analysis was positive for MBs in all 4 patients with sentinel headache, allowing timely identification of unstable UIAs, prompt endovascular treatment, and prevention of SAH. In this study, we applied QSM analysis as the gold standard to define aneurysm instability and compared degree of AWE among UIAs with MBs (unstable) and without MBs (stable).

After institutional review board approval, patients with UIAs underwent 3T HR-VWI at diagnosis. Patients were recruited from January 2015 to May 2020. UIAs with non-saccular morphology (i.e. fusiform, blister-like) were excluded. Cavernous aneurysms were also excluded due to artifact of the cavernous sinus on T1-post contrast images. Additionally, due to limited spatial resolution of 3T MRI, UIAs <2 mm in size were also excluded. Demographic and clinical information necessary to calculate the scores was obtained from electronic medical records.

Quantitative Susceptibility Mapping (QSM) DICOM images were imported to Horos Medical Image Viewer (Nimble Co LLC, Annapolis, MD). Use of the Matlab toolbox was coupled with STI Suite, Laplacian-based phase processing on QSM files to produce tissue phase visualization [15]. Two blinded adjudicators, who are experienced vascular neurosurgeons, separately evaluated both the QSM and VWI images. In the case of disagreement between two adjudicators, a consensus was reached by discussion. The presence of MBs was evaluated by overlapping MRA images of the UIA with QSM images using 3D slicer, an open-source software platform [16]. Segmentation for MBs was performed using pixel-labeling methods with an optimal susceptibility threshold of 0.1 parts per million [17]. The regions with high-susceptibility in QSM images were strictly distinguished from the surrounding cerebral vasculature.

All images were analyzed with Picture Archiving Communication System, version 12.1.6.1005 (Carestream Vue PACS, Rochester, NY). Our protocol for assessing aneurysmal wall enhancement on HR-VWI has been previously described [18, 19]. Briefly, the aneurysm was manually co-registered in both pre- and post-contrast T1-weighted sequences in three planes (axial, coronal, and sagittal). After six-fold magnification and auto-correction of viewer windowing, a 2D region of interest of the aneurysm wall was drawn at the level of maximal aneurysm diameter. CE-MRA and 3D T1 SPACE (pre-contrast) images were used as a reference to delineate the inner surface of the aneurysm wall.

Aneurysms were considered ‘irregular’ if blebs and/or daughter sacs were visualized on the aneurysmal surface. The quantification of aneurysm enhancement and morphological analysis was performed by two investigators blinded from clinical data.

Continuous variables are presented as mean  ±  standard deviation (SD), and categorical variables are presented as frequency and percentage. Distributions of values for CRstalk were tested for normality using the Kolmogorov-Smirnov method. For normally distributed values, Student’s t-test was performed; for non-parametric distributions, Mann Whitney U-test was applied. Pearson’s coefficient was used to assess for statistical correlation between PHASES, ELAPSS, UIATS, and aneurysmal wall enhancement as reflected by CRstalk. A multivariable logistic regression was modelled to predict rupture risk using CRstalk values. Variables with a p-value < 0.20 in the univariable analysis were included in the multivariable regression model. A 2-sided p-value < 0.05 was considered significant. All statistical analyses were performed with SPSS Statistics 25.0 (IBM, Armonk, New York) and GraphPad Prism version 8.1.2 (GraphPad Software, La Jolla, California).

One-hundred and twenty-three patients harboring 178 UIAs underwent HR-VWI. Of them, 97 UIAs (54%) were excluded: 54 due to QSM artifacts, 19 due to fusiform morphology, 9 due to size (<2 mm), 8 due to location in the cavernous segment of the internal carotid artery, and 7 due to poor HR-VWI quality. 81 unruptured IAs were analyzed: 71 stable (MBs absent) and 10 unstable (MBs present) (Figure 1).

ROC curve analysis demonstrated that the best CRstalk cut-off to discriminate between UIAs with and without MBs was ≥ 0.55 (82% sensitivity, 67% specificity) (Figure 2). 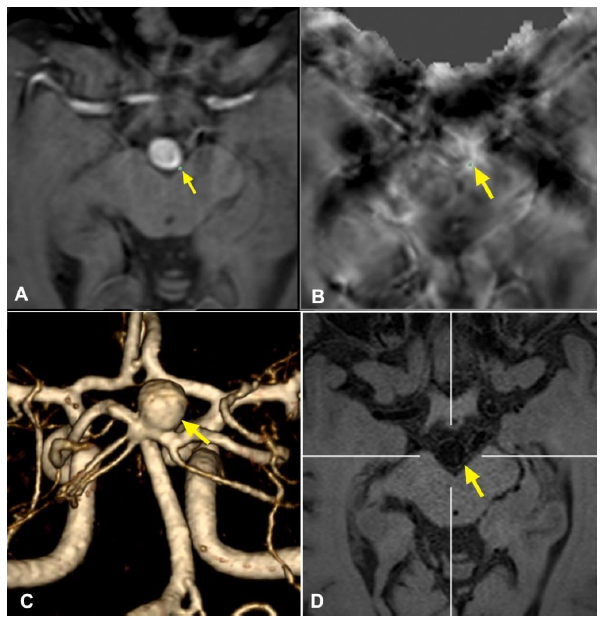 Figure 1: Representative case of a basilar tip aneurysm showing the methodology applied for HR-VWI and QSM analyses. (A) and (B): QSM sequences showing an area of microbleed in the left posterolateral aspect of the aneurysmal wall; (C): 3D MRA reconstruction of the aneurysm to characterize its morphology; (D): HR-VWI demonstrating an area of focal enhancement that corresponds with the microbleed. 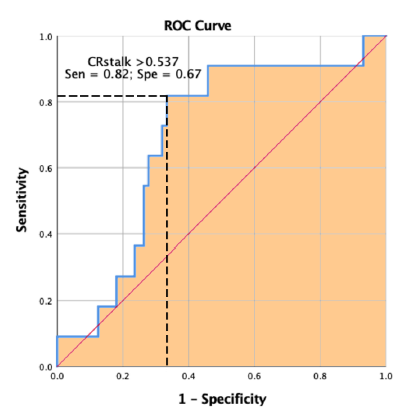 Figure 2: ROC curve depicting the best CRstalk to predict presence of MBs in the aneurysmal wall.

This HR-VWI study suggests that a CRstalk greater than or equal to 0.55 can be used as an alternative biomarker of instability in addition to QSM. Positive QSM analysis strongly suggests the presence of MBs at the interface between the wall of UIAs and surrounding brain tissue.  This was validated by the presence of hemosiderin both by direct visualization during microsurgical clipping and immunostaining of aneurysm wall tissue from subjects with sentinel headache [24]. According to Zhang et al., cerebral MBs have been shown to have an independent association with increased risk of aneurysm rupture by approximately 60% [25]. Although QSM has a high specificity in identifying MBs, its post-imaging processing is usually obscured by the presence of bone artifacts (mostly from the clivus and sphenoid clinoid processes) that lie in close anatomical relation with the Circle of Willis. Thus, the strong positive association between aneurysmal wall enhancement and the presence of MBs suggests that this biomarker may detect unstable IAs.

Our study demonstrated that there are statistically significant differences in size, CRstalk measurements, and PHASES scores between stable and unstable UIAs. With these values, we created a receiver operating characteristic curve and identified the best CRstalk cut off with a sensitivity of 82%. However, the specificity was at a lower value of 67%, meaning that one third of patients are at risk of being a false positive. Wang et al. pointed out that when comparing the signal intensities at the neck, body, and dome of IAs, the threshold value would be 0.615 with a sensitivity of 89.5% and specificity of 63.2% [26]. Another study by the same group showed a cutoff of 0.605 using multiple logistic regression analysis with a sensitivity of 90.3% and specificity of 87.9% [27]. These are very similar to our findings from CRstalk measurements comparing the signal intensity of the aneurysmal wall and pituitary stalk. However, we propose that a lower value of 0.55 can be used as the new threshold for detection.

Based on our results, HR-VWI can be considered as an alternative to MR-QSM when identifying unstable IAs. Larsen et al. has suggested that contrast-enhanced MR vessel wall imaging could detect inflammatory and degenerative changes and enable a clinician to estimate the individual risk of rupture [10]. These results build on the evidence of QSM and HR-VWI as screening tools to detect MB in sentinel headaches. In our previous study, we determined that positive QSM findings strongly suggest MB and that the lack of aneurysmal wall enhancement on HR-VWI can rule out MB with 96.6% accuracy [24]. Having another biomarker for clinicians to detect aneurysmal instability may ultimately lead to expedited treatment and reduced rates of aneurysmal SAH.

This study is limited by its small sample size. While many patients and aneurysms were recruited, around 54 (31%) had to be excluded primarily due to lack of adequate QSM imaging necessary to confirm the presence or absence of MBs in the aneurysmal wall. Also, this study was conducted within a single center, which limits the generalizability of the results to larger populations. Future multicenter studies with a larger cohort are recommended to confirm these results. This research is not intended to replace other standardized methods of aneurysm detection/assessment but rather to serve as a reliable biomarker of aneurysm instability and risk of rupture.

There is a strong positive association between aneurysmal wall enhancement in HR-VWI and MBs detected on QSM sequences. CRstalk ≥ 0.55 may be used as a complimentary tool to non-contrasted head CT and lumbar puncture in evaluating aneurysmal instability.