We describe a case of a 61-year-old female presenting with recurrent episodes of acute dyspnea and found to have coronary artery vasospasm leading to variable wall motion abnormalities, myocardial infarction and fatal arrhythmias. The clinical presentation, differential diagnoses, diagnostic evaluation and treatment of cisplatin induced cardiotoxicity are discussed below.

A 61-year-old female with a history of hypertension, thirty pack year tobacco smoking, recently diagnosed partially obstructing T3N0MO supra-glottic laryngeal squamous cell carcinoma on daily radiation therapy, presented with an acute dyspnea a day after starting weekly cisplatin monotherapy. Physical examination was notable for a stridor and bilateral crackles. Her vital signs were unremarkable except for a blood pressure of 150/90 mmHg, and an oxygen saturation of 70%-80% on non-invasive positive pressure ventilation. She was subsequently intubated for airway protection. Laboratory tests were notable for a white blood cell count of 43.6, and a troponin I of less than 0.10. Electrocardiography (ECG) (Figure 1) showed a sinus tachycardia with Q waves in septal leads unchanged from baseline ECG.

Chest X-RAY showed bibasilar opacities suggestive of pneumonia, and a computerized tomography scan of the neck showed a stable mass with mild to moderate laryngeal narrowing unchanged from a prior imaging. Patient was treated for aspiration pneumonia with a plan to place a tracheostomy tube to prevent aspiration. ECG (Figure 2) three hours later prior to emergent tracheostomy showed a new ST elevation in lead V3.

Serum troponin remained <0.10. She had no symptoms except for ongoing dyspnea. Blood pressure went up to 190/100 mmHg with a heart rate of 115 beats per minute. Urgent coronary angiography was pursued given concern for acute coronary event. The procedure showed a mild to moderate non flow limiting coronary artery disease in mid left anterior descending artery (LAD) with a basal and mid-anterior wall hypokinesia. Left ventricular ejection fraction (LVEF) was 75% (Figure 3).

The overall picture was suggestive of possible stress induced cardiomyopathy. She was treated medically with aspirin, statin, and her blood pressure normalized with intravenous enalaprilat. She finished an antibiotic course, had a tracheostomy and was later discharged stable to continue cisplatin monotherapy. Patient presented again two weeks after the latest weekly dose of cisplatin monotherapy with another episode of acute dyspnea. Physical examination and laboratory tests including ECG (Figure 4) were initially unremarkable.

Decision was made to change the tracheostomy tube due to suspected aspiration event. Next day, she became hypotensive, developed acute respiratory distress syndrome attributed to aspiration pneumonitis/ pneumonia. She was started on antibiotics and required a low dose of pressor support. She then developed an episode of ventricular tachycardia (VT) in the middle of obtaining a transthoracic echocardiography (TTE). VT resolved with amiodarone and magnesium infusion, and TTE later revealed new wall motion abnormalities affecting the apex, mid and apical portion of the interventricular septum with LVEF of 40-45% (Figure 5). ECG identified a new ST elevation in antero-septal leads V2 and V4 (Figure 6). Serum troponin was 37.48. An emergent repeat coronary angiography showed a stable 50% mid-LAD stenosis unchanged from the previous study one month prior, but distal LAD spasm (Figure 7) was this time evident. 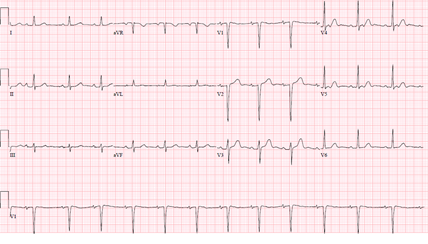 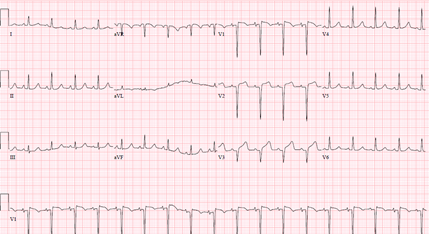 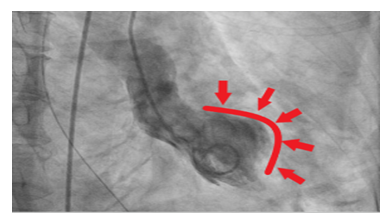 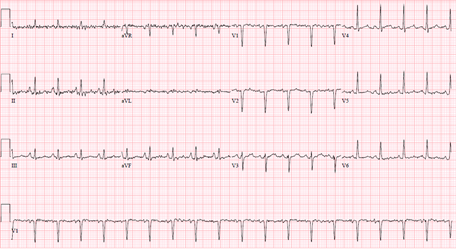 Figure 5: New wall motion abnormalities affecting the apex, mid and apical portion of the interventricular septum with LVEF of 40-45%. 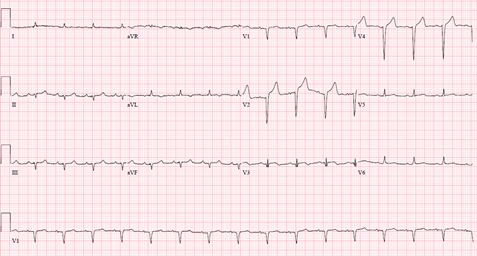 Figure 7: Emergent repeat coronary angiography showing a stable 50% mid-LAD stenosis unchanged from the previous study one month prior, but distal LAD spasm was this time evident.

Prinzmetal’s angina, a condition involving recurrent episodes of coronary vasospasm upon exposure to cold weather, stress, medications i.e. epinephrine or norepinephrine, smoking and stimulant use like cocaine. Usually affects individuals at a young age with evidence of coexisting peripheral vasospastic phenomenon i.e. Raynaud’s. Other etiologies of coronary vasospasm include: coronary atherosclerotic disease both in acute and chronic settings [1, 2], chest and mediastinal radiation therapy with a cumulative exposure of greater than 30 Gray causing CAD and predisposing to coronary vasospasm [2], hypomagnesemia, and myocardial bridging.

On both presentations, patient had a stable non flow limiting coronary artery disease of mid LAD (Figure 2), with remarkable variable wall motion abnormalities each time. Identification of distal LAD spasm on the second presentation explained the apical wall motion abnormality. There were also variable transient ST elevation in antero-septal leads on both presentations. Serum troponin was elevated later in the course of the second presentation upon development of myocardial infarction with active coronary vasospasm and peaked after nitroglycerin therapy.

ST elevation resolved with nitroglycerin and that supported the diagnosis of coronary vasospasm. The development of ventricular tachycardia was likely secondary to the cardiotoxic effect of cisplatin and to myocardial ischemia from active recurrent coronary vasospasm. Tachyarrhythmia is a known side effect of cisplatin therapy. It was identified promptly with continuous cardiac monitoring and was adequately controlled with amiodarone and magnesium infusions.

Despite not being a common side effect of platinum based monotherapy, cardiotoxicity should be anticipated with cisplatin induction and throughout the course of therapy. Over the past ten years, there have been numerous case reports with various cardiac events including: vasospastic angina, myocardial ischemia, diastolic and systolic heart failure, and both silent and symptomatic tachyarrhythmia [3-5]. Those events were reported minutes, hours, days and even weeks after treatment owing to the long term retention of active platinum particles by the body with ongoing vasotoxic effect [6, 7]. The exact mechanism of cisplatin cardiotoxicity is still unprecedented, yet a number of mechanisms have been proposed among which is direct endothelial damage and vascular toxicity. Cisplatin induced vascular toxicity is pathogenetically distinct from chronic vascular disease [8, 9]. Hypomagnesemia secondary to cisplatin induced renal tubular damage is another theory proposed for coronary vasospasm. The presence of diseased coronaries, a history of tobacco smoking have predisposed our patient to the cardio-toxic effects of cisplatin. Takotsubo had not been reported with cisplatin chemotherapy. Our patient was initially thought to have stress induced cardiomyopathy due to the presence of risk factors such as an acute catecholaminergic surge in a postmenopausal woman, with wall motion abnormalities in the absence of a hemodynamically significant coronary artery disease. Takotsubo accounts for 1-2% of all myocardial infarctions, but usually associated with a mild elevation in cardiac biomarkers disproportionate to the extent of LV dysfunction as compared with patients experiencing an acute MI [1, 2]. The presence of variable wall motion abnormalities, a stable CAD, an active coronary vasospasm and a highly elevated serum troponin makes us believe that these events were secondary to the coronary vasospastic effects of cisplatin rather than merely stress induced cardiomyopathy.

It has been proposed that the main factor influencing the severity of cisplatin adverse effects was the dosage administered. Daily doses correlated to gastrointestinal and respiratory disorders and cumulative doses affected mainly hepatic and hematological systems. Dosages and protocols correlating with cardiovascular side effects; however, were not studied. Another factor is the speed of drug elimination which is much less in slowly regenerating tissues with the half-life of the drug in some tissues reaching up to 28.5 months [10].

Patients with a history of tobacco smoking, risk factors for, or evidence of CAD, who received or are receiving a concomitant radiation therapy to cisplatin monotherapy might benefit from evaluation by a coronary angiography first, their risk factors should be mitigated, and they should be started on nitrates or calcium channel blocker prior to initiation of cisplatin chemotherapy [7]. Prospective studies to identify the various cardiovascular toxic effects of cisplatin monotherapy are needed comparing the low dose versus the high dose cisplatin therapy protocols to help identify the best practice to prevent or minimize these toxic effects. Cardiac monitoring helps identify those effects and we propose close monitoring while on cisplatin therapy. Once cardiovascular toxicities are identified, cisplatin chemotherapy should be stopped and different chemotherapeutic agents should be considered if possible, otherwise a reduced dose and careful monitoring should be considered while on cisplatin therapy.