Background: The percutaneous coronary intervention of chronic total occlusions (CTOs) is considered the most challenging technical procedure in the current interventional cardiology. Japanese Multicenter CTO Registry (J-CTO Score) was established to predict the probability of successful guidewire crossing through a half-hour.

Results: There were 173 patients included in the study, the mean±SD of CTOs number was1.4±0.8, the mean±SD of J-CTO score was1.8±0.9, the mean ±SD of fluro time was 29.3±14. There was no significant association between J-CTO score and outcome of patients (P=0.6), the amount of contrast used also had no significant association with patients‘outcome (P=0.4), whereas the mean of fluro time was significantly associated with outcome of patients (P=0.01).

Conclusion: J score showed no association with the success rate, however lower fluro time was a predictor of success

The percutaneous coronary intervention of chronic total occlusions (CTOs) is considered the most challenging technical procedure in the current interventional cardiology [1]. While there is not enough data collected yet, growing reviews suggest that successful percutaneous CTO revascularization treats symptoms, makes progress in left ventricular systolic function, and decreases the need for surgical coronary bypass. Besides, complete coronary revascularization improves survival [2] Yet, compared to individuals with severely stenotic, but patent vessels, individuals with a CTO are more likely to be referred for coronary bypass surgery or medical therapy. In a recently published Canadian registry, only one in ten individuals with a CTO underwent PCI [3]. It is worth mentioning that the success rate of CTO PCI was about 70%. This doubt related to the likelihood of success, mixed with the fear of high complication rates and beside the procedure costs, contribute to the unwillingness to percutaneously revascularize CTOs [4].

Japanese Multicenter CTO Registry (J-CTO Score) was initially established to anticipate the probability of successful guidewire crossing within a half-hour. Independent angiographic predictors of failure (each given one point) that pretend the J-CTO score, which comprises angiographic evidence of the prior failed attempt, heavy calcification, blunt proximal stump, bending within the occluded segment, and occlusion length >=20 mm [5]. CTOs were then graded as easy, intermediate, difficult, and very difficult (J-CTO Scores of 0, 1, 2, and ≥3, respectively). Since then, the J-CTO score has been reported to anticipate the overall probability of CTO PCI success. High J-CTO scores have been reported to associate with lesions complexity, [6] and may account for the paradox of stagnant CTO PCI success rate over time, which was due to intervening on increasingly complex CTOs [7].

PCI in chronic total occlusion has expressed significant evolution with the development of new techniques, as well as with the training of specialized personnel. These predictors have significantly raised success rates, making these procedures more efficient and predictable. CTO is known as coronary obstructions, which establish total occlusion of vessel lumen with TIMI 0 flow and duration longer than three months. Occlusions with the minimal passage of contrast without opacification of the distal vessel are considered “functional CTO” [8].

CTOs occur in 18-52% of individuals submitted to coronary angiography and who have coronary heart disease [9]. Recent reviews showed a prevalence between 16 and 20% [10]. In these studies, the percentage of patients with CTO submitted to PCI was low. In the two Canadian studies, only 9-10% of individuals underwent PCI, while 57 to 64% of them remained in clinical treatment, and 26 to 34% were referred for surgery [11].

It is worth mentioning that the J-CTO score, a scale based on pre-procedural angiographic factors, and previous procedural failure, could be used to predict the probability of successful guidewire crossing of CTO lesions within 30 min and an improved midterm success rate one year after CTO-PCI. Furthermore, the importance of the J-CTO score to predict the complexity of CTO recanalization was externally validated in a more contemporary cohort. However, the impact of the J-CTO score on the long-term target lesion revascularization (TLR) rate, as well as on other clinical outcomes has yet to be completely evaluated [12].

Abe et al. (2019) concluded that 425 lesions of 408 participants who subjected successful CTO-PCI over a median follow-up of 63.0 months in the J-CTO Registry. Besides, the cumulative prevalence of TLR of lesions related to a J-CTO score ≥ 2 was considerably higher than in the others with a J-CTO score ≤ one (27.0 versus 19.4% at five years, respectively). Between 323 lesions of 309 participants with a complete five-year follow-up, the rate of TLR was 28%. A J-CTO score ≥ two was independently related to a higher risk of target lesion revascularization (odds ratio, 1.73; 95% confidence interval, 1.01-2.99, P = 0.048) even after amendment for clinically relevant baseline predictors [12].

Christopoulos et al. (2015) reported that the effect of the J-CTO score on technical success and procedure time was estimated with univariable logistic and linear regression, respectively. The effectiveness of the logistic regression model was assessed with the Hosmer-Lemeshow statistic and receiver operator characteristic curves. Antegrade wiring techniques were commonly used in easy lesions (97%) than very difficult lesions (58%), while the retrograde approach became less common with more lesion difficulty (41% for very difficult lesions vs. 13% for easy lesions). The logistic regression model for technical success revealed satisfactory calibration and discrimination (p for Hosmer-Lemeshow=0.743 and area under curve=0.705). The J-CTO score was related to a two-fold increase in the odds of a technical failure (odds ratio 2.04, 95% confidence interval [95% CI] 1.52-2.80, p<0.001). Procedure time increased by about 20 minutes for every one-point increase of the J-CTO score (regression coefficient 22.33, 95% CI 17.45-27.22, p<0.001) [13].

Nombela et al. (2013) concluded that the J-CTO score was applied to each participant, and calibration and discrimination were evaluated in the whole group, and according to the approach (antegrade 47% and retrograde 53%). Clinical and angiographic differences were reported between the original and studied group. The median J-CTO score was 2.18±1.26, and successful guidewire crossing within a half-hour and final angiographic success was 44.5% and 90.4%, respectively. The J-CTO score revealed good discrimination (c statistic, >0.70) and calibration (Hosmer–Lemeshow P>0.1) in the whole group and for antegrade and retrograde approaches. However, the final success rate was not related to the J-CTO score [6].

Morino et al. (2011) concluded that the set endpoint was carried out in 48.2% of lesions. Independent predictors included bending, calcification, stump, blunt, occlusion length >20 mm, and formerly failed lesion. Easy, intermediate, difficult, and very difficult cohorts, stratified by J-CTO score, revealed stepwise, proportioned, and highly reproducible differences in the probability of successful guidewire crossing within half-hour (in the derivation set 87.7%, 67.1%, 42.4%, and 10.0% and in the validation set 92.3%, 58.3%, 34.8%, and 22.2%, respectively) [5]. This study aims to assess the correlation of J score with percutaneous revascularization success in chronic coronary total occlusion patients.

Retrospectively study, which was conducted on Male and female patients with a diagnosis of CTO who underwent coronary angiography at the Cardiac Catheterization Laboratory at King Abdul-Aziz Cardiac Center.

All patients > 18 years of age, with documented CTO from January 2010 to December 2017 who underwent a successful cardiac catheterization procedure at King Abdul Aziz Cardiac Center were included in the study. We exclude patients whose CTOs in more than one vessel and CTOs in small coronary branch vessels.

We classified patients into two groups: those with successful CTO-PCI and those with failed CTO-PCI.

SPSS program will be used for data analysis, version 22.0. Descriptive statistics were done. A P-value of 0.05 or less will be significant. 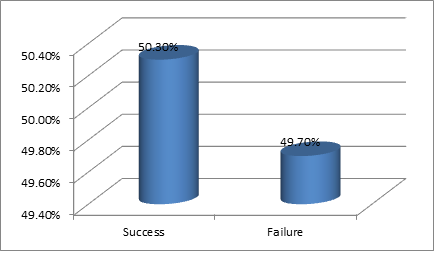 Planning of the recanalization procedure requires the use of angiographic scores to estimate the probable success rate and the type of approach [8]. The J-CTO score is the most widespread and oldest one [5]. Higher J-CTO score significantly indicates lower success rates, greater use of contrast, more frequent use of retrograde approach and longer procedures [13,14].

In the present study, we aimed to investigate the association of J score with percutaneous revascularization success in chronic coronary total occlusion patients. The range of J-CTO score was 0-4 with a mean of 1.8, the mean amount contrasted used, and fluro time was 162.7 and 29.3, respectively. The wire was crossed among 72.8% of patients; the success rate of the procedure was 50.3%. By investigating the factors affecting the outcome of patients, it was found that J-CTO score had no association with the outcome of patients the mean of J-CTO score was similar in success group and failure group (1.8); also the mean of amount of contrast used didn't differ between the two groups. However, fluro time showed a significant influence on the outcome of patients; the low mean of fluro time was significantly associated with the success of the procedure.

It was demonstrated that J-CTO score ≥3was independently associated with worse outcomes in the long term after retrograde CTO PCI [15]. In one study [16], it was found that 36.3% of patients were presented with J-CTO score2, and the higher score was associated with higher failure rates (P=0.006). Another study [17] reported that the success rate of CTO-PCI was high 82.6%, which was higher than our rate. However, a fewer rate of 29.4% of cases achieved 30 min wire crossing, whereas, in our study, the wire crossing was a success in 72.8%. The previous study [17] revealed that the CTA-derived J-CTO score was more useful than the J-CTO score derived from Conventional angiography in predicting the success of the procedure and 30 minutes crossing.

It was reported that high J-CTO score lesions had a higher five-years risk of TLR [12], and the J-CTO score was strongly associated with final success rate and efficiency, and J-CTO was supported to be used in CTO interventions [13]. It was shown that the J-CTO score helped to predict the complexity of CTO recanalization [6].

In the present study, we found that the success rate was low and J-score, as well as the amount of contrast couldn't predict the success rate and their mean value didn't vary between the patients in success group and failed group, whereas low fluro time can be a predictor of the success of the process.