1Department of cardiology of the Military hospital of Tunis, Bab alioua, 1008 Montfleury, Tunisia

2Department of hemato-oncology of the Military hospital of Tunis, Bab alioua, 1008 Montfleury, Tunisia

3Department of Radiology of the Military hospital of Tunis, Bab alioua, 1008 Montfleury, Tunisia

Introduction: Takotsubo cardiomyopathy is characterized by a broad spectrum of clinical presentations. Despite its reversibility, it is associated with severe adverse in-hospital events. Recent studies have identified a high incidence of TTC in cancer patients.

Case Report: We report the case of a 59-year-old-man with TTC occurring just before injecting of chemotherapy drug complicated by cardiogenic shock and acute heart failure. Under medical treatment, a complete recovery of cardiac contractility was noted within three days. chemotherapy regimen has been stopped and then alleviated from RCHOP to the RCVD. No recurrence of cardiac symptoms was noted during the follow-up period. Left ventricle ejection fraction, BNP, and troponin levels were maintained normal.

Conclusion: Takotsubo cardiomyopathy can occur in cancer patients leading to interruption of chemotherapy because of left ventricular dysfunction, which may adversely affect the oncologic outcome because of interruption of cancer treatment. We report this case to remind clinicians that TTC should be considered in the differential diagnosis of chest pain in cancer patients who present with ECG findings characteristic of acute coronary syndrome. We hope to facilitate prompt diagnosis for an early intervention that allows rapid recovery of myocardial function, and resume cancer therapy early and may help lower mortality.

Takotsubo cardiomyopathy (TTC), also known as stress-induced cardiomyopathy, is characterized by a broad spectrum of possible clinical presentations [1]. Despite its reversibility, it is associated with severe adverse in-hospital events, the acute stage of the disease can be complicated by hypotension, shock, arrhythmias, heart failure, and death [2]. Recent studies have identified a high incidence of TTC in cancer patients [3]. TTC has been linked to emotional stress due to the excessive release of catecholamines as a mechanism of response [1]. The emotional stress of a cancer diagnosis, physical stress, ongoing chemotherapy, the abnormal cancer-related wasting syndrome may increase the risk of developing TTC. There have been very few, and small studies were addressing the prevalence and outcomes of cancer patients with TTC [4]. We report the unusual case of a 59-year-old-man with Tako-Tsubo cardiomyopathy (TTC) occurring just before injecting of chemotherapy drug complicated by cardiogenic shock and acute heart failure, to highlight the importance of performing a differential diagnosis with cardiotoxicity, since TTC presents a rapid recovery allowing non-interruption of chemotherapy treatment.

A 59-year-old man with a history of diabetes mellitus and systemic arterial hypertension was admitted to the department of hemato-oncology for chemotherapy for follicular non-Hodgkin’s lymphoma diagnosed in May 2020, He did not have any previous cardiac history; cardiac investigations done before starting chemotherapy were normal. Our patient had completed two cycles of chemotherapy of CHOP plus Rituximab regimen (doxorubicin, vincristine, cyclophosphamide, rituximab, and methylprednisolone), with the cumulated dose of anthracycline of 100mg/m2. Before the infusion of the third course of chemotherapy, the patient was stressed, he had pain because of a laborious arterial punction, he developed acute shortness of breath, discomfort, chest pain, and excessive sweating. He subsequently became tachycardic with a heart rate of 120 bpm, with rapid progression to cardiogenic shock requiring inotropic agents with blood pressure at 60/40 mm Hg and signs of cardio-circulatory failure and tissular hypoperfusion. The patient was then transferred to an intensive care unit. A 12-lead ECG showed a sinus tachycardia of 130 bpm, associated with ST-segment elevation in leads V1-V6. There was a rise in the level of serum troponin-I at 100 ng/L (normal range 0–40). An urgent transthoracic bedside echocardiogram revealed normal-sized but apical ballooning with hyperdynamic basal segments. The estimated left ventricular (LV) ejection fraction (EF) was 38%. There were no signs of tamponade and pulmonary embolism (figure 1). The 2D strain was decreased at -10.5% (figure 1c). A provisional diagnosis of anterior ST-elevation myocardial infarction was made, coronary angiography was performed, demonstrated a non-obstructive right coronary artery atheroma which did not explain the cardiogenic shock (figure 2). A subsequent cardiac MRI (figure 3) reported an akinetic left ventricle from the mid ventricle to the apex with impaired global ejection fraction, there were signs of myocardial edema in the LV walls in T2-weighted sequences, suggestive of Takotsubo cardiomyopathy and there was no evidence of myocardial inflammation, myocardial infarction, fibrosis, or infiltration in the late gadolinium enhancement sequences. Based on these findings, a diagnosis of TTC was made. Treatment with β-adrenoceptor antagonists: Bisoprolol 1.25 mg daily and ACE inhibitors: ramipril 2.5 mg daily (titrating the doses up to the maximum doses tolerated by the patient) was initiated. A remarkable improvement in LV function was noted in the echocardiogram performed three days after the event, LVEF and 2D strain became in the normal range (figure 1d). The chemotherapy regimen has been alleviated from RCHOP to the RCVD regimen which does not contain doxorubicin, known to be highly cardiotoxic; it was considered that its reintroduction in a patient with impaired myocardial function could be deleterious. The patient remains in follow-up in the onco-cardiology unit, he was examined weekly, for four weeks after the event, and reported no recurrence of his symptoms. in view of this favorable evolution, the standard regimen of chemotherapy (RCHOP) was resumed in combination with cardio-protective drugs. After each course of chemotherapy, troponin and brain natriuretic peptide (BNP) remained at normal levels, and the size and function of the left ventricle were maintained normal. The patient has completed his chemotherapy for six months, cardiological follow-up every three months has been maintained, no cardiac complications have been noted. 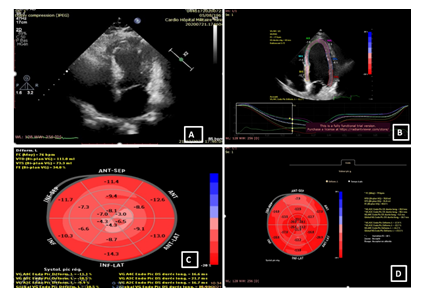 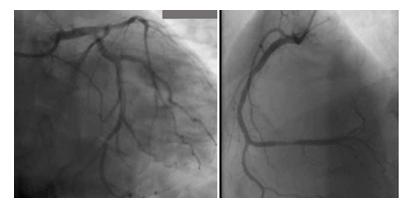 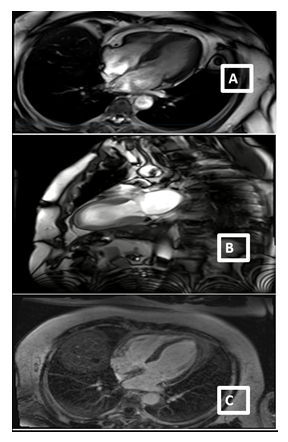 Figure 3: Cine cardiac magnetic resonance of our patient. A two- and four-chambers view of the left ventricle showed apical ballooning, transmural edema. No ischemia, no signs of myocarditis, no myocardial infiltration.

In cancer patients, TTC should be considered in the differential diagnosis of chest pain, and electrocardiographic abnormalities without a culprit coronary artery lesion. Although the prognosis from TTC is generally good, this condition can lead to an interruption in chemotherapy, which may adversely affect the oncologic outcome. Early intervention may help lower mortality, rapid recovery of myocardial function, and resume cancer therapy early. Therefore, medical professionals need to recognize, monitor, and treat this condition appropriately.

The authors declare that they have no potential conflicts of interest related to this publication.

No funding to declare.

This case report was approved by the ethics committee of the Military hospital, Tunis, Tunisia. The patient gave written consent to use his clinical and paraclinical information to prepare this article.

The patient the patient allowed to publish her case, as well as relevant related workup and diagnostic images, presented in the medical literature.

No acknowledgments to declare.