Effects of Artemisinin on Peak Sodium Current in Ventricular Myocytes

Conclusions: Artemisinin attenuates INa by modulating the voltage dependence of the Na+ channel similar to the class I anti-arrhythmia agents.

Artemisinin (Art), as an effective antimalarial agent [1], has been widely used for decades. Several other pharmacological effects of artemisinin have been demonstrated, such as cytotoxicity against tumors and cancers [2-3] and antiarrhythmic effects [4]. Previous studies have shown that inhibition of multiple potassium channels, including inwardly rectifying potassium current (Ik1), transient outward potassium current (Ito), and delayed outward rectifier potassium current (Ik) with similar potency, as well as prolongation of action potential duration (APD), are the major mechanisms of the antiarrhythmic effects of artemisinin [5]. A previous study reported that artemisinin affected the amplitude of ionic current in intact nodose ganglion neurons of adult rats by blocking the voltage-gated Na+, K+, and N-type Ca2+ channels?suggesting the probable mechanism of anti-arrhythmia [6]. Recent research has shown the ability of artemisinin to attenuate the voltage-gated Na+ (INa) and delayed-rectifier K+ current (IK(DR)) in endocrine or neuroendocrine cells [7]. All these data show the inhibitory effects of artemisinin on voltage-gated Na+ channels in various cells, but little is known about its effects on ventricular myocytes.

Our previous research confirmed that artemisinin has an antagonistic effect on ventricular arrhythmias induced by increased left ventricular after load [8]. Hence, the present study was undertaken to investigate the effects of artemisinin on peak sodium currents of ventricular myocytes to further understand the mechanism of antiarrhythmic actions of artemisinin.

Artemisinin was dissolved with DMSO and diluted with deionized water to prepare concentration of 50 μM. Nifedipine was prepared at a concentration of 10 mM to inhibit the calcium current. All reagents were purchased from Sigma-Aldrich (Beijing, China).

Isolation of the ventricular myocytes

The animal experiments complied with the Guide for Care and Use of Laboratory Animals drafted by the Institutional Medical Ethics Review Board of Peking University People’s Hospital.

The animals used in this study were Eleven to twelve-weeks old male Wistar rats, purchased from Beijing Vital River Laboratory Animal Technology Co., Ltd.. The method of isolation of the ventricular myocytes was described previously [9]. Briefly, heart was quickly removed and cannulated on a Langendorff device and perfused with Tyrode′s solution (36.5?) for 5 min. Then changing to Ca2+ free Tyrode′s solution (standard Tyrode’s solution without CaCl2) for 10 minutes. Next the heart was enzymatically digested for a period of 15- 20 min with a solution containing collagenase II (200-230 U· L-1). Left ventricular tissue was then excised from the softened hearts and minced gently and filtered with mesh filter. The myocytes were incubated in the KB storage medium at 4? temperature.

INa were recorded in a single ventricular myocyte by whole-cell patch clamp in a voltage clamp mode. The resistance of micropipettes with pipette solution were 2-4 MΩ. An HEKA EPC10 USB single amplifier was used to record current with low pass filtered rate at 3kHz and digital rate at 10kHz. The junction potentials and series resistance were electrically compensated and no leakage correction was applied.

In order to correct the current error caused by a discrepancy in the cardiomyocyte size, the current was shown as the current density alternatively. All continuous variables were represented by the mean ± SEM. The differences between the two groups were determined by student’s t-test. A p value of <0.05 was considered statistically significant. All analyses were performed by SPSS version 20.0, and curve fitting was performed by GraphPad Prism version 7.0. 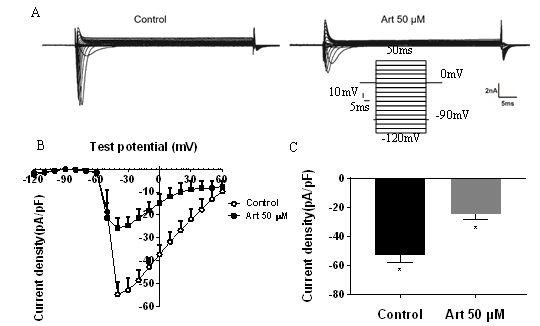 Figure 1: Effects of artemisinin on INa in ventricular myocytes. (A)current traces of INa in the absence or presence 50 μM artemisinin. (B) current-voltage (I-V) relationship of INa before and after application of 50 μM artemisinin.(C) Summarized data of maximum current density of INa (p < 0.05 vs. control).

We also examined the effect of artemisinin on inactivation kinetics for INa. The steady-state inactivation curve was conducted by a stimulus, which a condition pulse increasing from -120 mV to 0 mV was used to inactivate Na+ channel adequately prior to the testing pulse to 0 mV. In presence of 50 μM artemisinin, the steady-state inactivation curve illustrated in Figure 2B was also shifted negatively. V1/2 was decreased from −78.16 mV to −90.26 mV and the slope factor k changed from 5.37 to 6.77.These results demonstrated that a further negative potential was required for the activation and inactivation of the Na+ channel?resulting in facilitating activation and inactivation at rest potential.

The steady-state recovery curve was conducted by a condition pulse to -10 mV with holding potential at -120 mV, following a testing pulse to -10 mV with a time interval increasing by 1 ms. As illustrated in Figure 2C, the steady-state recovery curve became less sharp with 50 μM artemisinin and the time constant τwas increased from 2.89 ms to 7.13 ms which indicated that Na+ channel recovered slower from inactivation by 50 μM artemisinin.

In the present study, we found that artemisinin inhibited INa in ventricular myocytes and changed the voltage dependence and recovery of sodium channel.

Artemisinin attenuating INa shows similar action to class I antiarrhythmic agents, which decreasing the automaticity and conduction [10]. Three states of Na+ channel (rest, activated, and inactivated) vary in their affinity to the class I antiarrhythmic agents, and activation and inactivation states are higher than rest. Further, different agents show a discrepancy in affinity with these three states of Na+ channels. For example, propafenone has the strongest affinity with open channels, while lidocaine and mexiletine mainly bind to inactivated channels. Furthermore, INa blockers have an unlikely dissociation rate which determines use dependence. Lidocaine and mexiletine dissociate quickly from the Na+ channel and shows no blocking effect on INa at a normal heart rate. However, other INa blockers with longer dissociation duration block INa at a non-tachycardic heart rate [11]. It’s exactly the diversity of dynamic characteristics interacting with Na+ channel determines the different functions of INa blockers.

The authors declare that there is no conflict of interest.

I hereby declare that this piece of work was fully funded

Wrote or contributed to the writing of the manuscript: Huanqiu Song, Yuansheng Liu and Dong Han