Materials and Methods: Patients who referred to Masih Daneshvari Hospital during the year 2016 with acute dyspnea, chest pain and other symptoms associated with pulmonary embolism, and had embolism confirmed by Computed Tomography Angiography (CT angiography), in terms of symptoms Hemodynamic and echocardiographic disorders were studied. ECG results were compared with those of troponin I and previous uric acid found in the patient records, and the results were analyzed.

Acute pulmonary embolism is a common and sometimes fatal illness [1]. Clinical evaluation and diagnostic testing are vital prior to the onset of anti-coagulane therapy. Since, avoiding of delay in the onset of treatment reduces the mortality and morbidity [2]. PE is associated with varying degrees of lung arterial obstruction, which may lead to an increase in arterial blood pressure. This increase in pressure increases the right ventricular (VE) velocity, which results in an increase in the RV wall, leading to dilatation and RV hypokinesis and secondary cirrhosis of the caspade. [3,4,5]. Acute pulmonary embolism may result in right ventricular (RV) enlargement and disorder, which is life-threatening [3]. Electrocardiogram (ECG) disorders are common in patients with suspected PE. The most common findings are tachycardia and nonspecific changes in the ST segment and (T) (70%). The disturbances that appear to suggest the PE (S1Q3T3, RV strain criteria, new incomplete RBBB) are rare (less than 13%). ECG disorders associated with poor prognosis in PE include atrial arrhythmias, bradycardia, tachycardia, S1Q3T3, Inferior Q waves (leads II, III and avf), new incomplete RBBB, ST-segment, and T-wave inversionAnterior [3]. In patients suspected of having PE, levels of troponin T and I have no diagnostic sensitivity and specificity. However, they can be used to evaluate prognosis in suspected PE patients.

In numerous studies on the association of ECG and cardiac biomarkers with right ventricular function in pulmonary embolism, variable results have been obtained, which in some cases showed a significant relationship with undesirable clinical outcomes [4].  However, the role of ECG in the diagnosing the RV dysfunction in APE is rather unclear.

Objective of the study

Early detection of high-risk patients in acute pulmonary embolism in a clinical trial is a challenge. Although none of the ECG symptoms are not sufficient for a specific diagnosis, but in cases of high clinical suspicion for PE, ECG findings help predict severe pulmonary embolism and avoid delay in treatment. The aim of this study was to determine the relationship between ECG changes and the clinical outcomes of patients with pulmonary embolism in Masih Daneshvari Hospital in Tehran.

In a retrospective and analytical study, patients with clinical signs of pulmonary embolism, such as shortness of breath and chest pain who visited the Masih Daneshvari Hospital between January 2016 and December 2016, entered the study and had embolism confirmed by Computed Tomography Angiography (CT angiography). Exclusion criteria were: Electrolyte imbalance in the patient, renal impairment, Congestive Heart Failure (CHF), or Angina pectoris. People with previous MI or under anti-arrhythmic treatment have also been excluded from the current study.

At the beginning of the study, clinical manifestations, 12-lead ECG, and hemodynamics were studied [6]. The studied ECG markers were S1Q3T3 pattern, T wave inversion in V1 to V3, tachycardia sinus and right branch block.

T-wave inversion was interpreted by inspecting the pointed and symmetrical inverted T waves from leads V1 to V3. The S1Q3T3 pattern was defined according to the criteria of Mc Ginn and White10 (S wave in lead I and Q waves in lead III with a range> 0.15 mV [1.5 mm] associated with T-wave inversion in lead III). Right bundle branch blocks were defined according to common criteria. Sinus tachycardia was defined as an increasing in sinus rate to 2:100 beats/min.

Changes in the ECG axis were initially evaluated and correlated with echocardiographic findings. Cardiac biomarkers (troponin I and uric acid) were also studied. In addition, treatment was prescribed and ultimately mortality was evaluated in patients.

Table 1: Frequency and percentage of RV dysfunction and RAD Axis

Sinus tachycardia was significantly different from RV dysfunction (p = 0.008). Patients with ST depression pattern in the ECG had higher mean PAP in contrast to those with other patterns (p <0.0001). 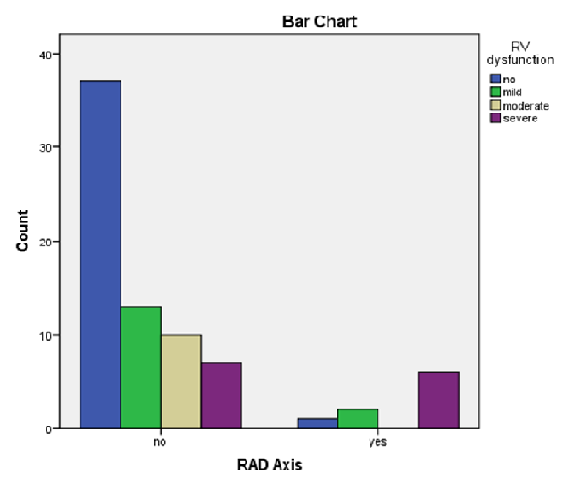 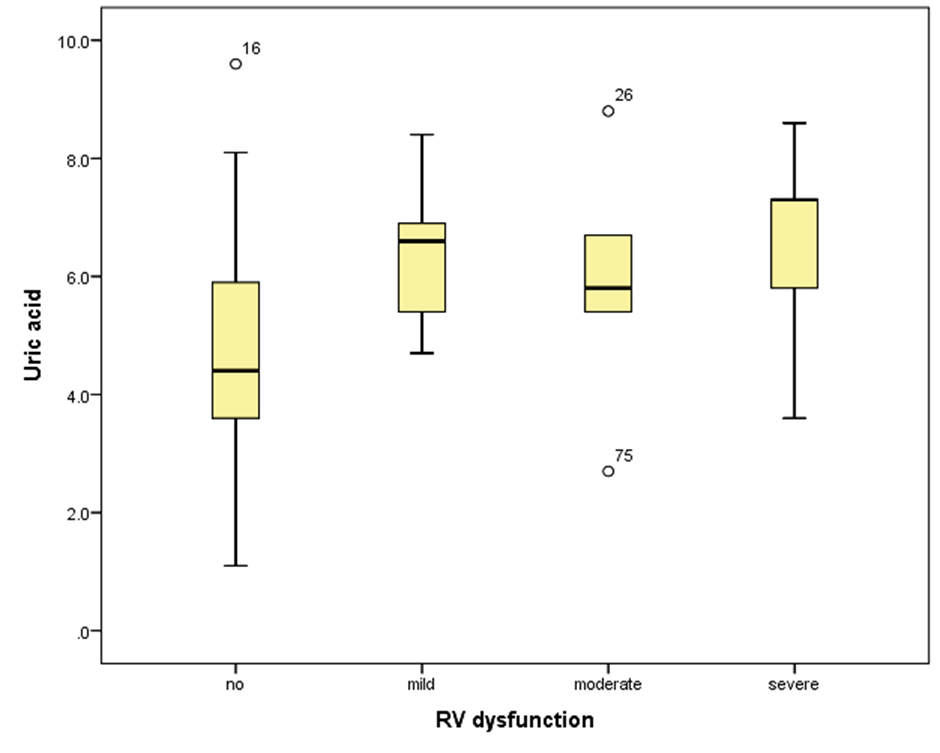 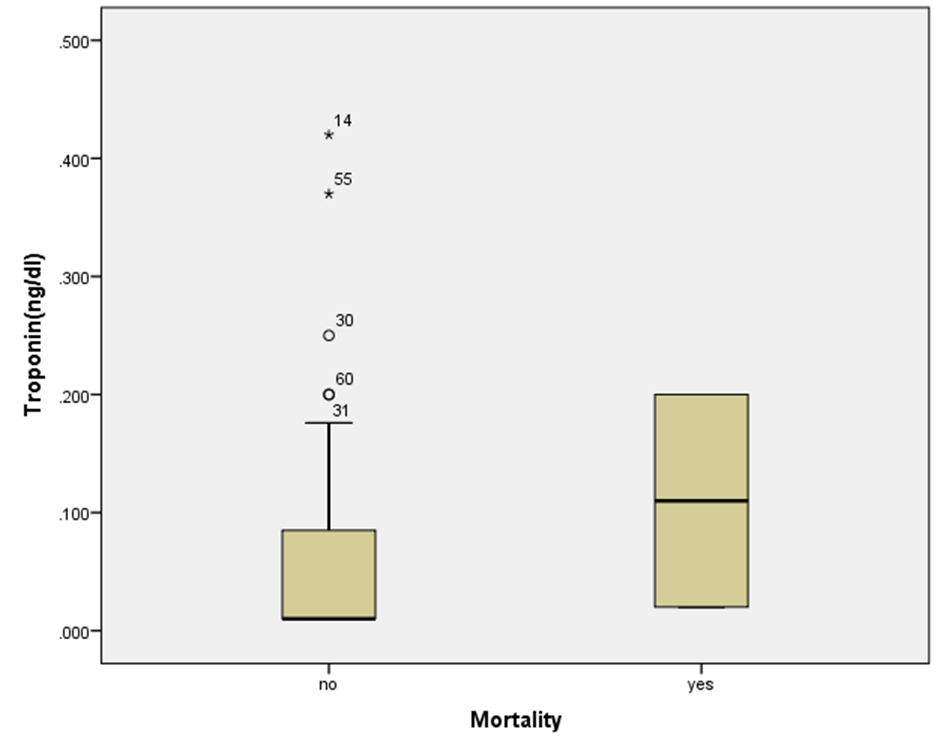 Diagram 3: No significant differences in the mean troponin level between those without and with mortality (p >0.05).

There was a significant correlation between mortality rate and either ST depression or necessity for surgical treatment (p=0.04, p=0.04 respectively). On the other hand, this correlation was not significant regarding the inf Q, Qr in v1, incomplete RBBB, RBBB, S1Q3T3 pattern, the presence of RAD Axis, the presence of T precordial p=0.5, p=0.8, p=0.2, p=0.06, p=0.4, p=0.1, respectively). Statistical analyses showed that there was a substantial association between Troponin level and Massive PTE (p=0.02).

Acute pulmonary embolism is caused by several factors and can lead to right ventricular dysfunction (RV), which is fatal [7,8,9]. The aim of this study was to investigate the relationship between ECG changes with right ventricular disturbances and clinical findings in patients referred to pulmonary embolism clinic in Masih Daneshvari Hospital, Iran.

The definite frequency of PE is highly reliant on the clinical prospect for the manifestation of pulmonary embolism. The efficacy of the V/Q is improved when it is inferred beside the clinical similarity to PE. This was defined in the PIOPED study [10]. In a study by Rodger et al., on ECG of 264 patients only sinus tachycardia and incomplete RBBB were significantly more common in PE patients. The prevalence of RBBB in Rodger study was 6% [11]. Similarly, in the current study, the incidence of incomplete RBBB was significantly increased in the presence of the ST depression and T precordial and the necessity for prescribing fibrinolytic treatments.

The severity of such changes depends on the size of the embolus [15]. These changes may be due to myocardial ischemia, hypoxemia, and several chemical intermediates, such as catecholamines and histamines. Using an ECG scoring system, in the routine examination of patients with pulmonary embolism can be very effective [17].

The current study was obtained from a subspecialty thesis of pulmonology (IR.SBMU.NRITLD.REC.M.132) funded by Shahid Beheshti University of Medical Sciences. Hereby, we like to express our grateful appreciation.

Authors have no conflicts of interest to declare. Authors give consent to submission and publication on the work. Authors disclose no relationship with any organization or industrial manufacture in any material discussed.